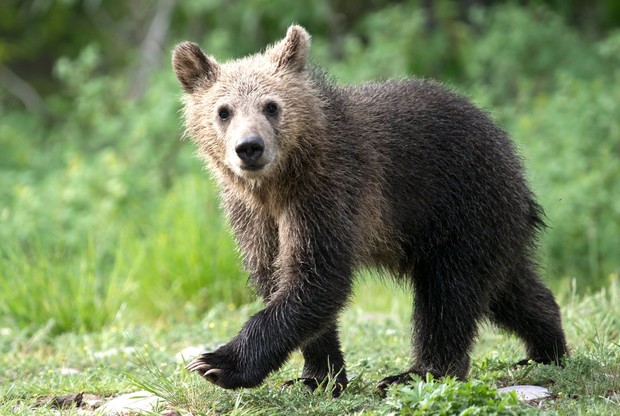 According to the Jackson Hole News & Guide, the summer solstice brought sad news to Grand Teton National Park, as park rangers are investigating Sunday night’s possible hit-and-run involving a young bear cub and the car of a park visitor. The cub, nicknamed “Snowy” or “Spirit” for the rare blonde coloration of his face, passed not far from the Pilgrim Creek drainage, where he and his mother frequently visited as part of their home range. Social media is ablaze with mourning from lovers of the mother bear and her new cub. 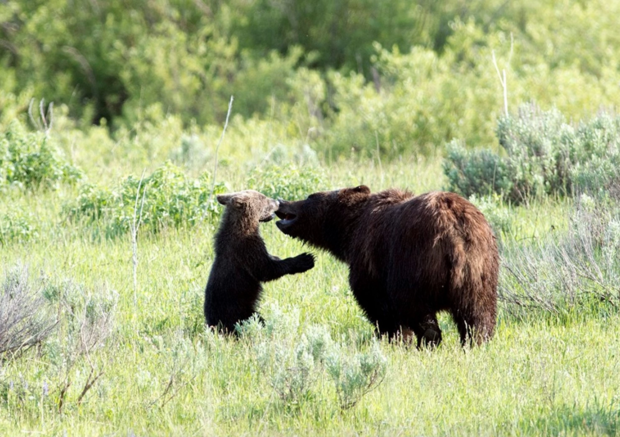 Snowy’s mother, known to wild bear fans as Grizzly 399, turned 20 years old last winter. She is, as Jackson Hole News and Guide put it, “the most famous living wild bear on Earth,” with millions of admirers across the globe.

399 gained attention and became known as as a “roadside bear” as she frequented roadsides in Grand Teton National park, accompanied by her brood of triplet cubs. In June of 2007, the matriarch faced death after mauling a hiker in the park, who had accidentally stumbled upon an elk carcass that she and the cubs had killed. The victim pleaded for rangers to spear the bear, concluding that 399 had only been protecting her cubs and their food.

Fans of 399 were especially excited to see her emerge from hibernation this spring, after a Jackson Hole local claimed to have killed her over the winter, and even more so to see that she had a playful new cub in tow. The bear has some 16 descendants, including her cubs and the cubs of her offspring—but over half have died in various negative encounters with humans. 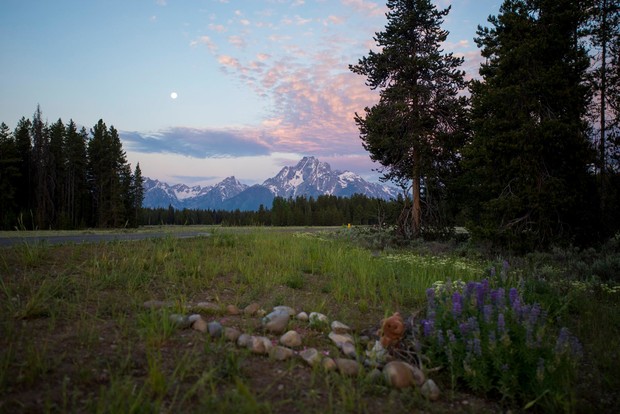 A memorial set up for Snowy, featuring Mt. Moran and the full moon in the background. Deby Dixon photo.

Deby Dixon, wildlife photographer, set out Monday morning to the spot on Pilgrim Creek Road where 399 is often spotted. She had hoped to photograph the pair, but instead happened upon what looked like the scene of an accident, reports The Washington Post. Dixon said that this cub was special—and not just because he was exceptionally cute and larger than most cubs. Dixon reports that 399 and Snowy played together often. “I’d never seen her play with her cubs before, but these two played,” Dixon told The Guardian. “It was almost like they were buddies.”

With no known eyewitnesses, it’s hard to say exactly when the collision occurred. The park service says that the collision may have happened Sunday night. Early Monday morning, a fire truck driver happened upon the scene on Grand Teton highway.

Observers noted that 399 appeared fitful, refusing to leave her cub’s side and eventually dragging the cub’s body off the road. She was later seen moving erratically throughout the area.

Biologists predict that “Snowy” could very well be the last cub that she ever has, as 399 enters senescence. “399 has been one of the grand dames of grizzlies in the Greater Yellowstone Ecosystem,” nature photographer Thomas Mangelsen tells National Geographic. “It is heart-wrenching to think that her last cub [has] been killed in a hit-and-run accident.” A roadside memorial for the cub has been set up near the site of the accident, in the form of a heart made out of rocks. 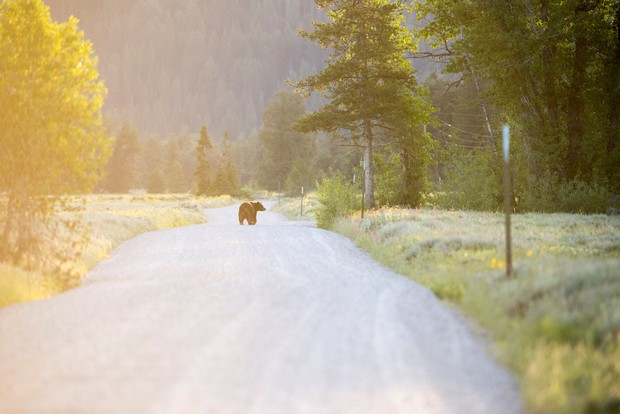 Grizzly 399 seen Monday morning near the scene of the accident, looking back as she often did while waiting for a cub to catch up. Deby Dixon photo.

The area surrounding the accident has been closed by park officials, and will remain closed for several days to give the mother bear some space and time to cope with the death of her only cub this season. Park biologists have since removed the body of the deceased cub, which will be preserved and used for educational purposes

During this busy season, it's important to obey posted speed limits... and be especially watchful around dawn and dusk when wildlife are more active.

"These unfortunate incidents are an important reminder for all of us to slow down and be vigilant when we travel through the park,” park superintendent David Vela said in a statement. "Especially with the traffic levels that we are seeing during this busy season, it's important to obey posted speed limits, maintain a safe following distance behind other vehicles, and be especially watchful around dawn and dusk when wildlife are more active."

This goes for all of the national parks: drive safely, obey speed limits, and exercise caution when viewing wildlife. Safe viewing distance for bears and wolves is at least 100 yards, and all other wildlife should be given at least 25 yards of space. If you choose to ignore the park service’s guidelines, we’ll gladly accept you as a nominee for the Darwin Awards.

I see it in Yosemite all the time.  people driving like a bat out of hell.  once you’re in the park, slow to 25 max speed.  else why are you there?  this is so sad. and, how about less and less cars in the parks, period?!