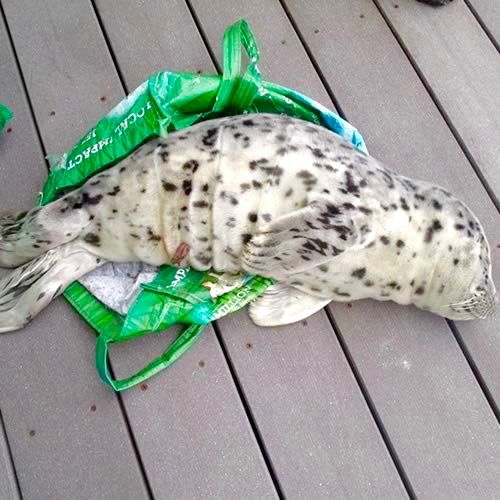 It might be shocking to some, which is shocking to me, but when you put a seal in your bag, it's not gonna dig it. AP Images photo.

Kayaking through Glacier Bay last week, I saw many a seal and pup. How did I react? Well, I sure as hell didn’t throw one in my tote, not even the boat. I’m not trying to toot my horn and say I’m one hell of a smarty-pants, but it doesn’t take more than a pea-sized brain to recognize seals are for looking, not for touching.

Repetition’s tedious, but certain things I’ll say till I’m blue in the face, and here’s one of them: let the wild animals be! Stop getting all up in their grill. I get you’re sometimes just trying to be a good samaritan by rescuing what you think’s a hurting/ lost/ scared/ abandoned/ sad animal, but the dudes are 99.99% never any of those. Most of the time, they’re just hanging out.

When you see a baby animal sans mother, it’s likely because mom’s temporarily busy hunting, with an emphasis on the “temporarily.” She’ll be back, and when she is, she’ll want to see her child not in the hands of the human species. That’s kindergarten knowledge. 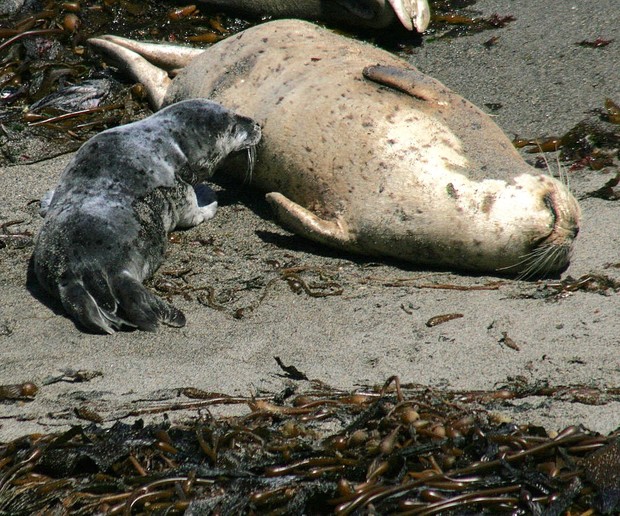 A perfect example of when not to interfere: this seal appears to have bitten the dust, but it's actually nursing its pup. Wikipedia photo.

In this case, a harbor seal pup in Westport, Washington had to be euthanized after some overzealous beachgoer (trust me, I’ve got a slew of other adjectives I’d rather insert, but I’m trying to hold it together here) stuffed it into her shopping bag, thinking the marine mammal’s mother had simply up and left.

The woman didn’t know what to do with the pup once home—not sure if this is only just when she realized her tub wasn’t going to cut it, or what—so she decided to call the local aquarium. That’s supposed to be step one: call authorities before placing your mitts on the animals, folks. What she was planning on feeding it, I dread to think. Probably grilled cheese. Crusts off.

According to ABC News, by the time the director of the aquarium arrived, the pup was "alive but extremely lethargic.” He said, “Putting him in the carrier to take him to a center was like picking up a sleeping human baby.” Euthanizing it became the most humane option.

This all went down two months ago, but the incident’s only just gaining attention after a recent news release about an increasing alarming spate of similar incidents. Wildlife officers don’t take euthanizing animals lightly, but rehab centers are often maxed out.

To break it down into simple English: Back the eff off.

Oh wow you know, i had this superior papers review wish you could have applied there as well, it has all this info and so much more to offer to everyone, i would still suggest people to go for it!