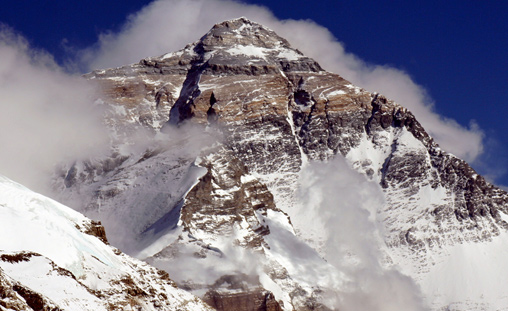 Two climbers died on Everest earlier this week, with the usual crowds and a COVID-19 outbreak in basecamp complicating this year's climbing season. | Wikimedia photo.

The Everest climbing season officially began earlier this month, and with the first teams summitting just a few days ago tragically came the first fatalities of the season. Two climbers (a Swiss-Pakistani and an American) were reported to have died on the upper mountain from altitude sickness on Wednesday. The guiding company responsible for their climb said both men were experienced mountaineers who died around 26,000 feet, near the “death zone” where lack of oxygen and unpredictable weather make for very dangerous climbing. The two deaths were unrelated. The American climber, 55-year-old Puwei Liu, died at camp on the South Col. The Swiss climber, 41-year-old Abdul Waraich died while descending from the summit after having completed his ascent of the seven summits (the highest points on each continent). The mountain is very busy with climbers this year, with over a hundred people already successfully summiting during a weather window earlier this week. Additionally, a COVID-19 outbreak has hit base camp on the Nepalese side of the mountain.

China has canceled their Everest climbing season, and Nepal's situation around COVID-19 is deteriorating rapidly. | Wikipedia photo. This year’s mountaineering season on Everest seems to be about two separate stories, one of extremely limited access to the Chinese side of the mountain, and one of the typical crowds on the Nepalese side. China has now officially canceled mountaineering access to the north, largely as a precaution against a raging COVID-19 outbreak in the Nepalese base camp.

Fact: Climbing is a popular sport. And it’s gotten even more popular during the COVID-19 pandemic. In places like Yosemite, the mecca of North American big wall climbing, that popularity has led to ever-increasing amounts of climbers on multi-day routes like those on El Cap or Half Dome. In response to those growing crowds, and the impact they have on the walls they climb (read: leaving poop and gear on routes) the National Park Service is testing out a new system requiring all overnight