We were not given an address, because Benjamin doesn’t have one. All we had were a street name and a distance. After a kilometre down, pavement turned into a dirt road with nothing around. Nothing but a windy path following the valley bed surrounded by trees and steep hills. Then, life started to appear. A big garden and a chicken coop stood on one side. Then, a little further down, a wooden sculpture laid in the middle of a field opening. We almost missed the laneway it was so narrow, but another sculpture gave it away. We drove down it and after couple of turns, there it was. A tiny blue house, a purple garage with a skateboarding bird painted on it and a massive wooden jump structure. We didn’t know much about that energetic blond guy everyone called Ben. We only knew he was a professional longboarder who moved back from BC less than a year ago, bought land in the small town of Riviere-a-Claude, Quebec with the goal of living off the grid and of the land. We knew just enough to be certain we had found the place we were looking for. 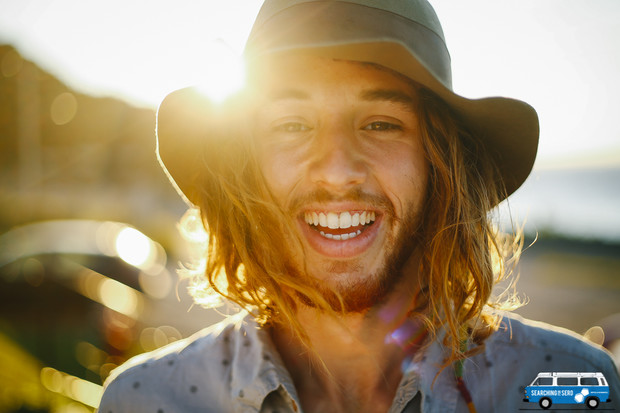 Ben is the creative type, with more ideas than he knows what to do with, and he’s not scared to work hard to make them happen. The following days were going to be busy. An avid skateboarder, Ben had organized a longboarding competition, the Gaspesia with the goal to get people to discover his neck of the woods, bombing hills along the way. We soon discovered that when he does things, he goes all out.

Ben is an active guy. He likes to be moving and although he started skateboarding pretty young, he also always enjoyed other sports. Mountain biking, snowboarding, fencing pretty much everything went. 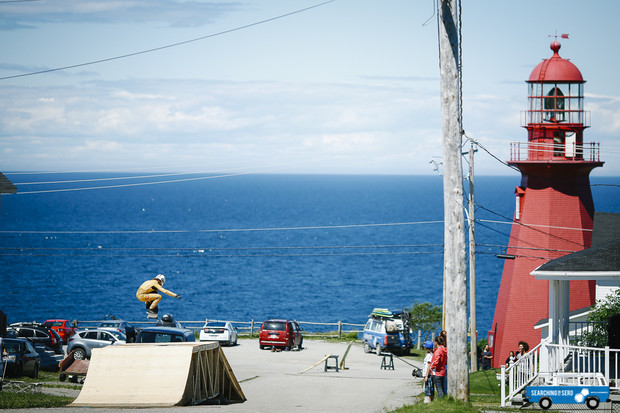 My passion for skateboarding goes out pretty far. I don’t remember the event, I think it was Christmas. There was a skateboard in the closet. It was the first skateboard I had with the old fluo liners, the protection all fluo underneath. That’s the first bit I remember. That and going to those big metal vert-ramps we had in town, the 8-9 footer.

Throughout high school, Ben kept up with street skateboarding, along with other sports, until he discovered longboarding.

My cousins used to do a lot of longboarding and they were telling me about it and about the speed. I thought it looked really fun and I started to meet other people who did it. My best friend told me: “You need to try this out. I just bought a new skate, it’s made to bomb hills. I’m going to go do a race in New York City.” I was like “Wow! What’s that?” It seemed interesting, so I started bombing hills with him around where we lived. 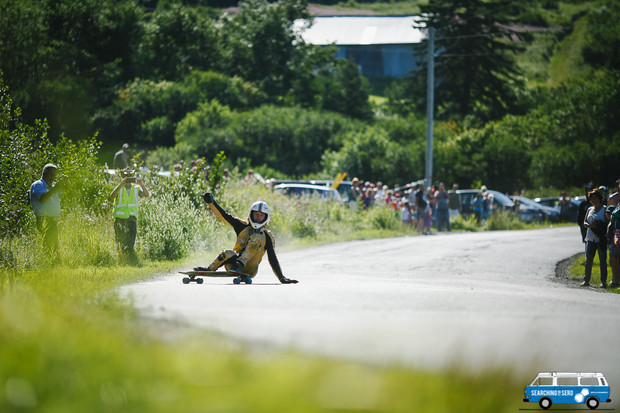 The thrill was good and Ben and his friend were really into it, lapping the two hills they had around in their area until Ben’s friend had an accident.

I made him broke his front arm when I bailed in front of him trying to go faster. After that, my parents told me it was dangerous for us to be skating on open roads. I did agree with them and I told that to my friend. He was like “What are you saying Ben? You’re not stopping longboarding!” From then, I started competing and just kept going.

Ben’s way was setting up right in front of him. Even though he was enjoying his industrial design studies and the fact he was drawing everyday, he was constantly thinking of longboarding out West with 10 to 15k runs being the norm. 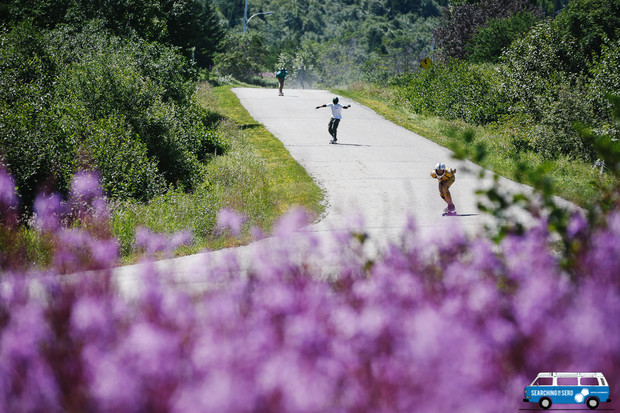 I moved out West to longboard mostly. I was sitting in a classroom, bored out of my mind, dreaming about longboarding, so I went. It was a very liberating move to go out West to do that. When you end up in BC and on the West Coast, it’s more serious. You see all the big names you see in the magazines there too.

The runs were as good as he dreamed of and although a little intimidating at first, it’s what Ben was looking for and more.

The first hill, we went just for fun. There were big hills and as we were going up, there were cliffs at each turn. I was certain they were not going down that hill. Sure enough, we get to the top, we meet our friends and they were like “Yhea, that’s the hill we’re doing.” I was a little scared but I just started following them and then it was good. It made sense to go down 20 hairpin instead of just two and walking up. That was sick. 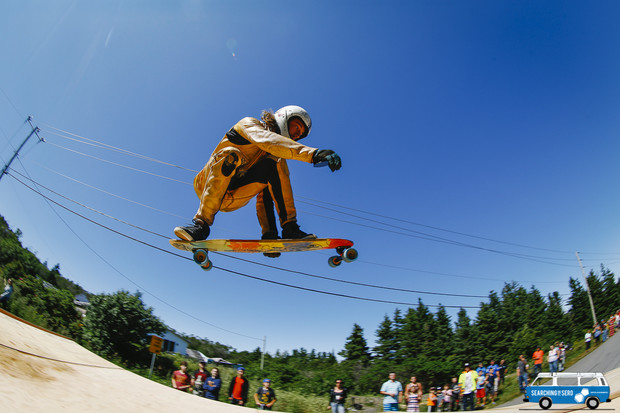 He enjoyed the two stretches he spent out West, longboarding, working and taking in the beauty nature had to offer while snowboarding some good powder.

Skateboard is really nice but you’re always around concrete and buildings. Longboarding, you’re a little bit in the mountains but you’re still always on concrete. It felt really good to just ride and be in that big nature. You feel it’s really stronger than you.

Although he still had a few projects on the go out in BC, Ben’s goal was to be able to live off the land, simply. Gaspesie, Quebec was on his radar, for the availability of land and the good backcountry skiing the Chic Chocs have to offer. During a trip to visit his family, he decided to check out a few lands. As soon as he saw this 100 acres piece of wilderness with mountains and a river, he knew he wanted to live here. A month later, he was leaving BC for the quietness of rural Gaspesie. 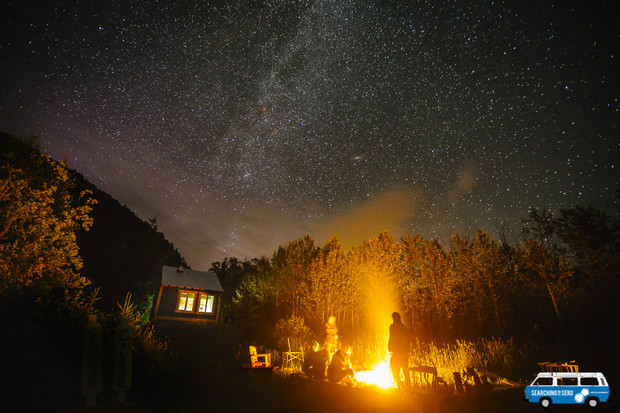 Connection to nature is what brought me here. To be able to live off the land, with not too many people around, do my own things. I have a hard time thinking I would be working all my life for something I don’t care for, wasting 50% of my time going towards something I don’t really believe in. I prefer spending that time playing on my skate, hiking or touring in the winter.

Ben makes everything sound so simple but when you see what he has built and accomplished in less than a year, you realize how hardworking this laid-back dude is. His house, is small but functional and constantly improving. Next on his list is to start building recreational features. Ben wants to build a rope-tow to go up the mountain to ski backcountry. He would also want to build some features to jump off of. Mountain bike trails is another of his project as he really wants to use all his land has to offer. One of his most talked about project is to build a skate park in one of the neighbouring town and get kids into the sport. He already started teaching a clinic and kids were ecstatic. He has a community mindset. He strongly believes it is possible to accomplish more if we can bank on everyone strengths and all work together and for that, he is more than willing to put the time and effort towards things he believes in. 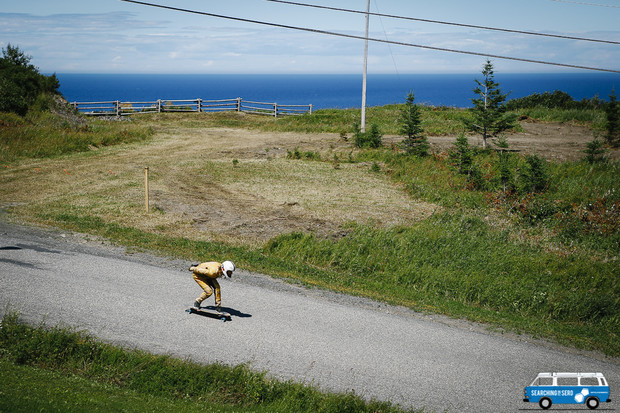 I find it was great to be brought to skateboarding young. In towns, you see skateparks and things like that. Just having the older persons that would come to you and help you or just share their passion with you is good. I had that a little bit and I like to share my passion and just seeing kids having fun finding a new sport. I really find a nice accomplishment in that. People from around here are on board. They really want something for their kids.

You could see those kids attending the race weekend. They were the most enthusiast spectators. Some had brought the longboard Ben had got for them a couple of weeks before to get it signed. It was great to see they had something exciting to look forward to. In small town where infrastructure are limited and spread out , you have to make the most of what you have and Gaspesie has so many amazing outdoor opportunities to be had. It's awesome to see it being recognized. 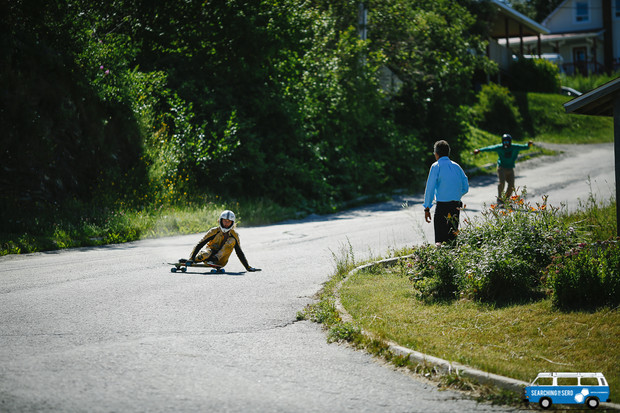 As for the Gaspesia it was a success. Everyone had a good time, the weather was perfect, riders gave a great show and everyone is already talking about the next edition. Who knows, Ben might have started what is going to be Quebec's greatest longboarding event!