So many people have recommended kitesurfing. From friends that do it to wind chasing adventurers we have met along our journey, each one of them is adamant about the stoke this sport brings them. Never, though, had we met someone like Denis. His love for kitesurfing had us regret not exploring before the adrenaline it brings. 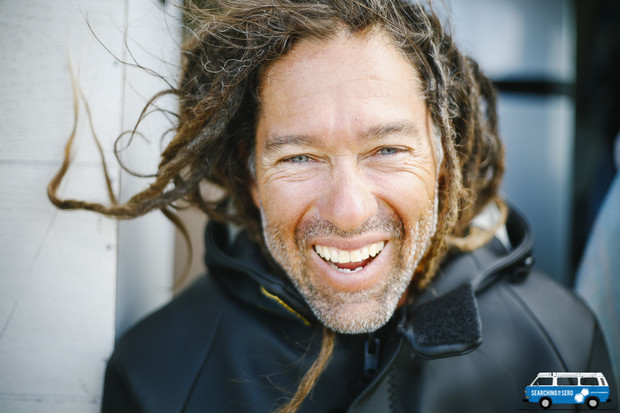 We had only been on the Acadian Peninsula for a few hours when we stumbled upon Denis. He was in the area, down from Montreal, in search for good winds and showed up in Petite-Lameque where we were already hypnotized by kiters flying high in the air. He got out of his small camper with his two dogs, his long dreads and the kind of smile kids have when they enter a candy store. In no time, his kite was blown and he was ready to get in the water and be carried by his passion. John and I knew we needed to talk to him, he obviously had a story.

We spent the next couple of days with him. We listened to his stories and got inspired by his love for kiting and for life. He showed us the basics of this amazing sport and a bit of his soul at the same time. 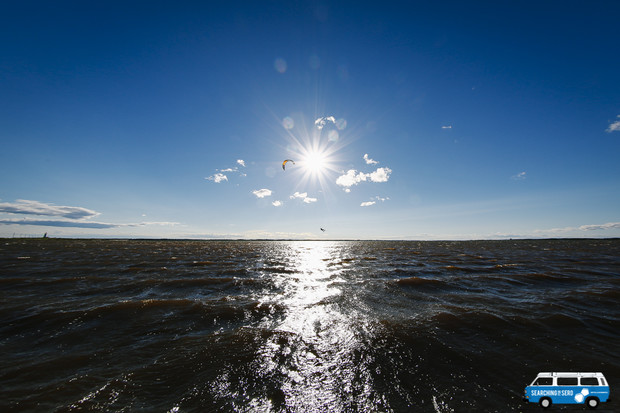 At 49 years old, Denis lives a pretty extraordinary life, but I guess it was always the case. When quite young, he discovered motorcycle riding and got really into it. Every year, he would go to Daytona for the races, enjoying to travel and meet new people. He even moved to California, trying to escape a suffocating routine. He lived there for seven years, riding his motorcycle around and got really good at building Chopper bikes. After returning to Quebec, he started to work in construction, putting in long hours for a few years and because he lives simply and doesn’t party, Denis was able to put aside some money.

One day, Denis purchased a training kite for fun but for some obscure reason, he didn't get it out of the bag for two years, until one day when in Florida. 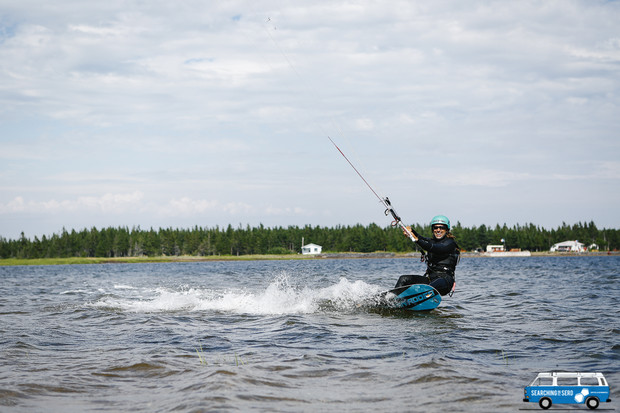 In 2014, I was on vacation with my girlfriend and I realized I had the kite with me. I flew it. As soon as I got back to Quebec that summer, I equipped myself and since that day, I haven’t stopped. That’s the passion you get from kitting, once you try it, you’re hooked.

During the following months, Denis tried to practice as much and as often as possible. It was almost an obsession. He wanted to get good, fast. In his mind, he won’t be able to kite hard for thirty years so he better make the most of it now.

It’s for everyone, young, old. I met a 79 year old rider in Florida. He was doing great. There is no age to that sport. If you just want to ride smooth, you can from 7 to 80 easily. I have seen people retire at 60 and live a great life. They get around in their RV, spend their winters down south and just enjoy riding their kites everywhere. 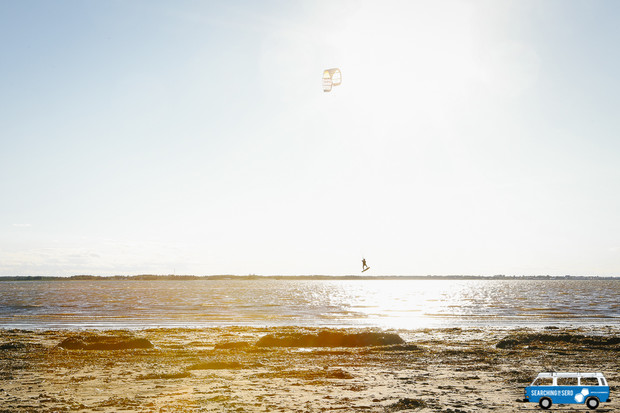 That winter, Denis spent four months in Florida and Texas in his camper with his dogs to kite. His life had taken a left turn, he wants to live it through kitesurfing for as long as he is able to.

If you are the passionate kind and try kitesurfing without any big misadventure when you start, you will be hooked and when you are, your life will turn around it. You will plan you vacation around it, take days off from work when they forecast winds just like a skier on a powder day. It completely changed my life. I have always enjoyed traveling and as a motorcycle guy, I traveled to places I could motorcycle, but I’m also a beach kind of guy. I love the sun, sand and water. When I discovered kiting, I got to discover new places, wild spots and new friends too. Kitesurfing brings you there.

Since then, Denis works periodically in order to top off the bank account and takes off again. He discovers new places and tries to become a better kitesurfer. He loves being able to kite faster, harder and higher, enjoying the ability to progress at a faster rate than you would with motorbikes. 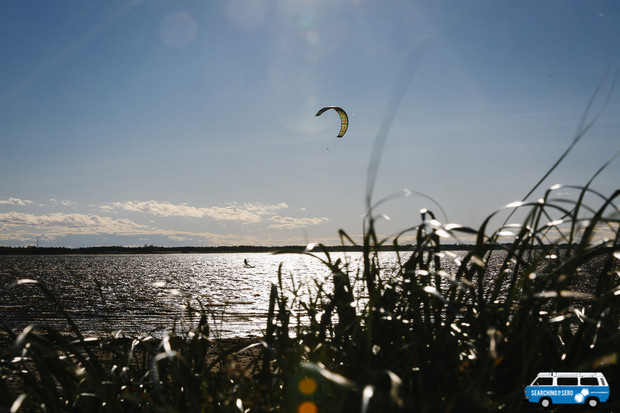 Kiting, I’m able to try out things faster than I would with a motorcycle. It took me three years biking to try out a jump which I did after two months with my kite. Right away you want to try out crazy things you would’t dare to with my bike. On a bike, you’re always scared because when you fall, gravity takes you down and it slams. Kitesurfing, there is always something bringing you up. You fall in the water, pull on the bar and get right back up. That’s the fun part, lines hold you and the sky lifts you up.

Denis found what makes him happy, you can see it in his eyes. He sold all his motorbikes and dreams of thirty knots winds everyday, wanting to seek his favourite feeling over and over again. For that, he plans on using parts of his savings to buy land somewhere where he can kite regularly and discover more amazing kitesurfing spots around the world. Kiting has brought him so much. 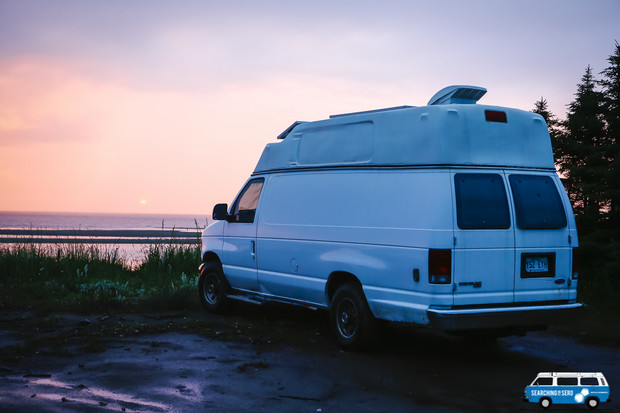 I won on the health front because I used to work a lot and I wasn’t the same. I was always tired, had no energy. I also won in what I have seen, my personality has gained from it. It’s a good drug, keeps me fit, healthy. It doesn’t destroy me. I am building my life although I have lost a good job and am not making the kind of money I used to. You win some you loose some. For those who focus on material things and money, I lost. For those focussing on the outdoors and being happy, I’m doing the right thing.

Denis reminded us it’s never too late to be happy, to turn your life around. He is an example of perseverance and optimism and his love for kite is contagious. John and I are the proof. Since we first met him, we look at the sea and hope for winds. Who knows where that will take us, but hopefully as high as Denis!

amazing history and is very interesting, I read with great pleasure

I love this. I would drop everything and run to the woods in a heartbeat, especially if there was something so exhilerating to do while I’m there. It would be absolute magic to be able to do this.

READ THE STORY
Up Next Ice climb

Here’s a horror story from Colorado: a few days ago ice climber and AMGA Apprentice Guide Leland Nisky was out taking a solo lap on a classic ice climb in the San Juan backcountry called the Ribbon. It’s a steep, walled-in WI4 couloir of ice that has as large bowl positioned above it that will often funnel spindrift and sloughs down the ice. While Nisky was about 400 feet up the route, a massive slough came down and he could do nothing but hang on for dear life. The resulting video is insane,