To many, the European medal-winning slalom paddler has been on an upward trajectory for over a decade, with that journey culminating in selection for Tokyo 2020 late last year.

The reality away from the water is a dramatically different story.

She cites therapy at the Priory clinic, in addition to an intervention by her coach, as being crucial to saving not only her career, but her life.

"Looking back you can probably track it to my childhood and being bullied, which led to low self-esteem and down the road depression and self-harming," the 24-year-old tells BBC Sport.

"It was a cycle, where I had paddling as my escape so when it was going well everything was fine, but if I had an injury and was left alone 24/7 then all of the emotions I'd bottled up would come out and it'd leave me very vulnerable."

'I was pushed around for being a tom-boy'

Woods is likeable, chatty and approachable, but she says she was not always so open and found it difficult to make friends at school, where she was often verbally abused.

Salvation came through sport - initially rugby, netball, football, basketball and cricket - but that too created opportunities for bullies to target her.

"I was muscular because of sport and people would say horrible things because I had a six-pack and big shoulders," she recalls.

"Things are changing but as a girl who was a bit of a 'tom boy' back then I had to deal with being pushed around and I spent most of the bus journey home in tears."

Born in Rugby in Warwickshire, she grew up with three younger siblings and was taught to "be strong" and stand up for herself. 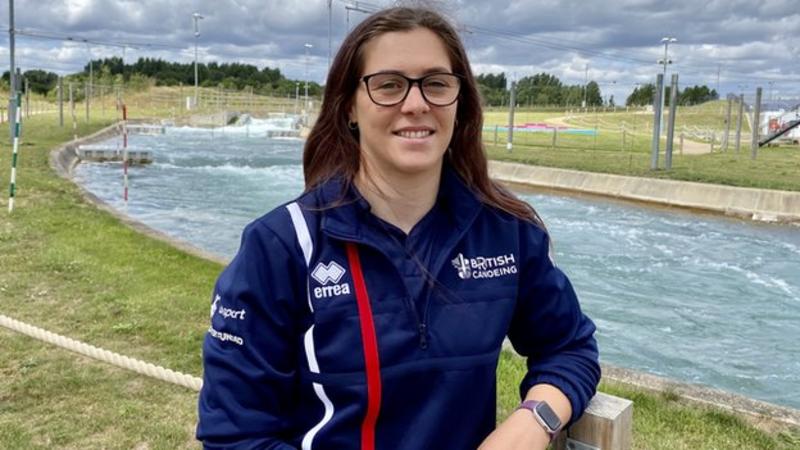 That meant Woods would never back down when challenged by other students and eventually those altercations led to her being excluded from school.

"At one point I wasn't allowed to be at school half of the time because of my behavior and then about a year out from my GCSEs I realised I needed to settle down," she says.

Self-harming was a 'cry for help'

Woods admits she was in a "depressive state", her mood fluctuating dramatically, and she would often struggle to find the motivation to get out of bed.

The paddler hid scars on her arms with long-sleeved T-shirts and although after returning to sport she would go for periods where she did not self-harm, relapses occurred when challenges emerged.

"I just never had the courage to say I have a problem, help me," says Woods, who adds that an intervention by her coach Craig Morris was a "massive" turning point in her life.

"If he hadn't sat me down and helped me open up I don't know where I'd be - certainly not heading to the Olympics next year!"

"We were very worried," says Morris, who has worked with Woods for nearly a decade.

The alpine climbing dream team of Alex Honnold and Tommy Caldwell are at it again. With international travel shut down, they’ve been forced to focus on objectives a little closer to home, so it’s no surprise they’ve managed to put together a linkup right in Caldwell’s backyard of Estes Park, Colorado. Rocky Mountain National Park is home to some of the finest alpine rock routes in the country, and the duo climbed just about all of them in one push. They called it the Continental Divide

The TGR tour is in full swing, with sold out crowds around the country getting hyped for winter with our new ski and snowboard film 'Make Believe' on screens at the drive-in, outdoor events, or socially distanced indoor premieres.  Related: Get your Tickets to TGR Make Believe Here  This Saturday saw the launch of our more intimate screenings, as the TGR WhiSKI Series kicked off with a hometown event at the Jackson Hole Rodeo. Now in its fourth year, the WhiSKI Series is our small batch