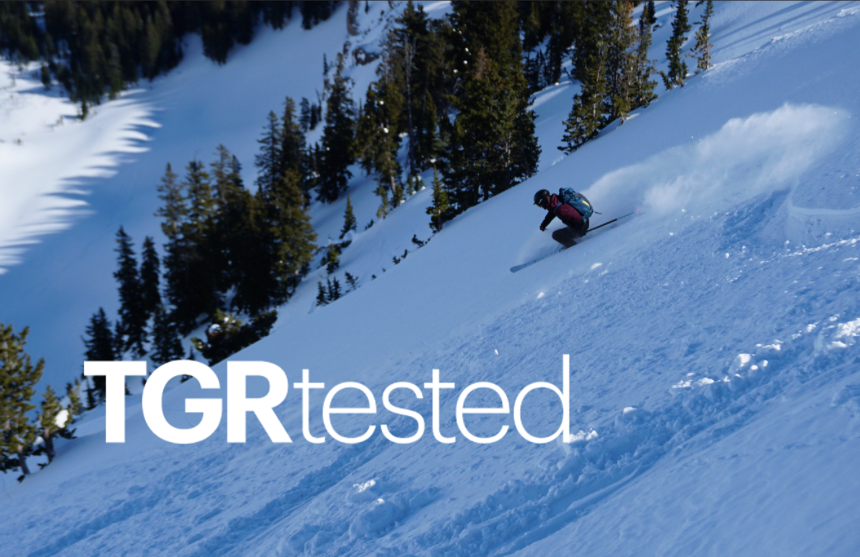 Weston's Grizzly is big and floaty, yet nimble and quick-turning tool that’s perfect for racking up vert on those days where’s it’s just too deep to stop. | Andrey Shprengel photo.

Wait. Isn’t Weston Backcountry a snowboard company? Well yeah, but they’ve quietly been making skis for the past few seasons, refining designs and tweaking materials to make a strong entry into the world of backcountry skiing. Why the crossover into an entirely different segment of the snow market? Simply put, they know that backcountry snowboarders and skiers are doing the exact same thing: enjoying their time in the mountains together, so why not cater to both audiences? Weston offers two ski models in their lineup, the mountaineering-oriented Summit, and the pow-slaying Grizzly, which I got the chance to test during the epic storms the Tetons got in February. Both are dedicated backcountry skis, utilizing lightweight construction and shapes that are expressly suited for skiing the snow you’ll find in the mountains, whether it's firm windboard and chalky powder, or bottomless cold smoke. The Grizzly is a big and floaty, yet nimble and quick-turning tool that’s perfect for racking up vert on those days where’s it’s just too deep to stop. Oh and here’s a fun fact - Weston will work with the National Forest Foundation to donate a portion of the proceeds from each pair of skis sold to help plant new trees. The plan is for 10 trees per pair of skis sold with the potential to plant 10,000 trees.

Truth be told, there’s not a whole lot of revolutionary space-age tech going on inside Weston’s skis and boards, and that’s actually a good thing. Most noticeably, the skis are built to be incredibly light. The 186cm Grizzly weighs in at 1900 grams, not bad for a 120-waisted behemoth. Weston achieves this with a paulownia wood core combined with aluminum stringers (for stiffness, instead of a sheet of metal) and a carbon topsheet. In terms of durability, they have stood up to a season of riding with little visible damage (no chips on the topsheet or sidewall, or any edge damage). From a shaper’s standpoint, the Grizzly combines a super-wide platform (144-120-134 for the 186cm) and a relatively short 20m turning radius. The sidecut shape is paired with a rocker-camber-rocker profile and massive tip and tail splay to make the ski incredibly maneuverable. Underfoot and behind the binding, the skis are quite stiff, but the tips and tails are quite soft. Weston gives a 6/10 flex rating. The mount point is set back 8cm from center, with a few centimeters of wiggle room. The topsheet features art from John Fellows.

The skis are equally capable of ripping big turns on open faces, or hunting face shots in the trees. | Andrey Shprengel photo.

How Does it Ski?

Let’s be clear here, Weston’s Grizzly is not a ski you can just grab and ride any day of the year. At 120mm underfoot and 186cm long, it’s really only there for skiing deep pow, but man does it put a smile on my face in that situation. In the past, I’ve shied away from bringing skis over 105mm underfoot deep into the backcountry, simply because they were too heavy and I didn’t see the point in lugging a big heavy ski up thousands of feet of skintrack. The Grizzly completely changed my mind and became a go-to tool for when the snow was deep and the only thing on the agenda was skiing as much pow as possible with the power of my own two legs. Mounting a pair of Dynafit Superlite 150s kept the weight down and gave me the ability and confidence to bring these pretty much wherever I wanted in the Tetons on deep days. I switched between skiing the Dynafit Radical Pro boot (a more powerful freeride-oriented boot) and a La Sportiva Skorpius (a lightweight touring boot leaning more towards the ski mountaineering realm) and found that it wasn’t necessary to ski these with a super-beefy boot. 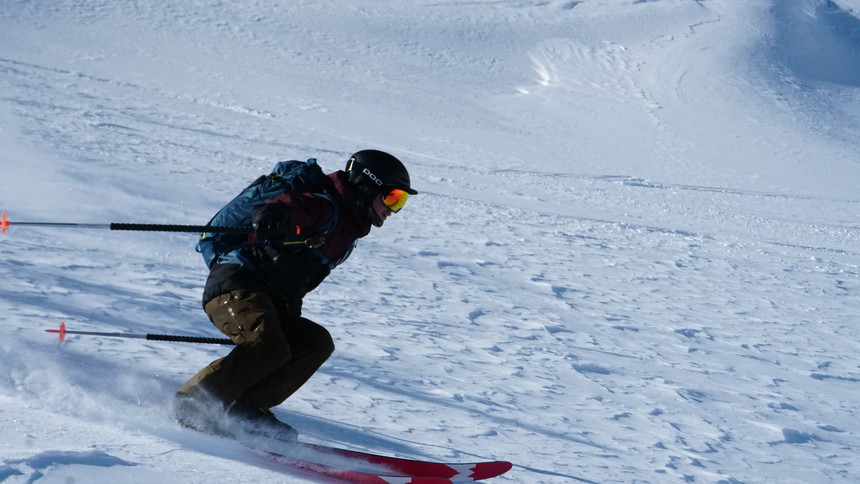 The light weight of the ski makes it possible to drive it and ski hard with light touring boots - a plus for big days. | Andrey Shprengel photo.

In deep snow, the Grizzly is like floating on a cloud, allowing you to skip over the snow even at low speeds. I’ve found that lots of powder skis will only float if you ski fast enough, which can defeat the purpose. In tighter terrain, like trees and pillow stacks, the floatation of the Grizzly is especially nice since it allows you pivot and smear in order to dump speed and change direction quickly. I attribute this to the short 17-meter turning radius, the stiff underfoot section, and the massive amounts of tip and tail rocker that make the ski feel short in turns. The tips and tails are also quite soft, allowing them hook up and initiate turns in the three-dimensional medium of deep, dry pow. Making big slashes and tossing the skis sideways at high speed mid-run never gets old.

For me, going powder skiing means jumping off of things, and the Grizzly does not shy away from airtime. While it is a twin-rocker ski, the slightly rearward mount point provides a solid platform for stomping airs without the feeling of going over the bars on landing in deep snow.

-Super lightweight, so big uphill days are a breeze, particularly on light boots.

-Will keep you afloat, no matter how deep it gets.

-Super lightweight, so skiing choppy snow or hardpack is not so fun, despite the dampening effects of carbon stringers.

-Skinning on this fat of a ski hurts my knees on steep sidehills. 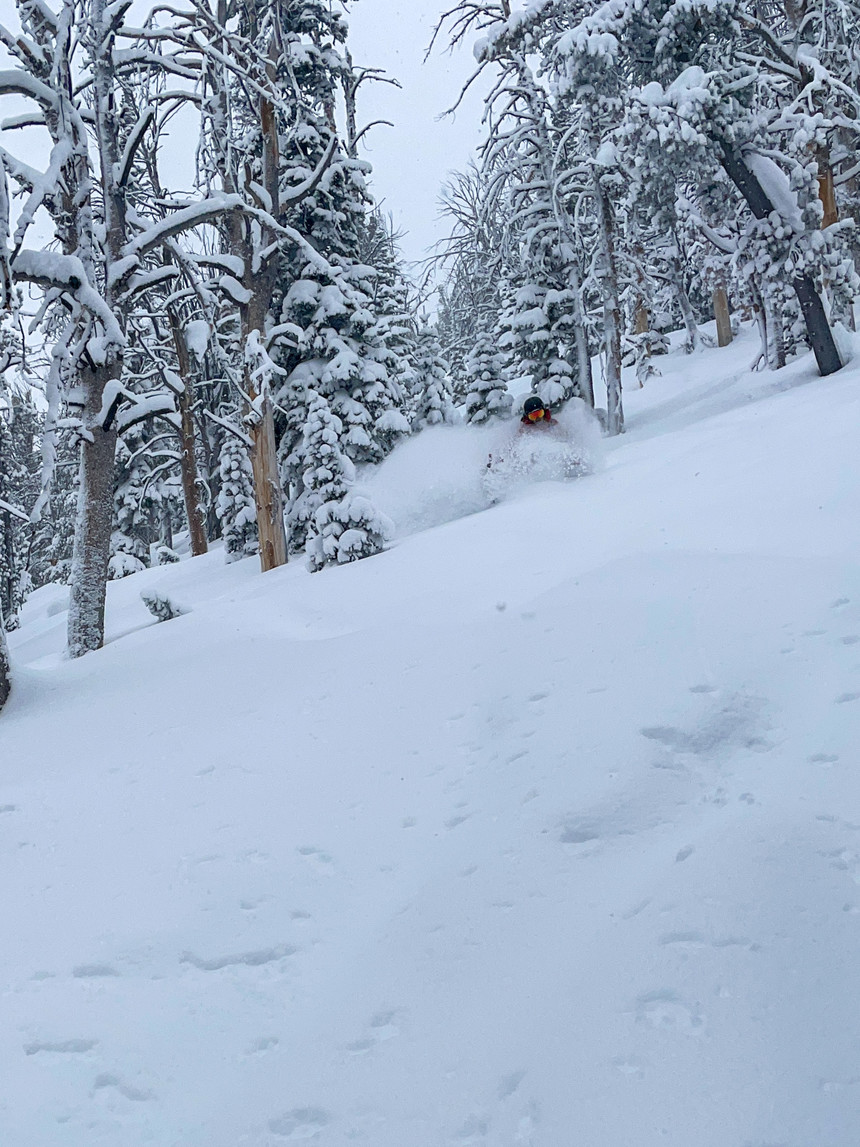 The aforementioned faceshots in the trees. | Lily Krass photo.

January and February 2021 were somewhat of a blessing and a curse in the Tetons, giving us feet upon feet of cold, dry pow that fell on top of an unstable snowpack. That meant sticking to the trees and low-angle slopes to ski some of the deepest snow I’ve ever experienced. Having a ski like the Weston Grizzly to take out on days like that made a guaranteed fun day just that much better, and I can say that if you’re looking for a mid-winter backcountry-specific powder ski, look no further. Getting to test it once the snowpack stabilized and I was able to venture into steeper more committing terrain only reinforced that. It’s impressively light for big uphill days and with a surfy, freestyle-friendly shape, will put a smile on your face no matter where you take it when the snow is deep. Throw ‘em sideways and enter the white room, why don’t you?

Get the Weston Grizzly here.

Weston Grizzly Skis are is one heck of a snowboard. It’s slick, durable, and built with solid material. I got mine as a gift from my dad who also loves skiing. It’s one of our bonding moments. Great review!  Commercial Roofing

These are one of my three dream skis! I’m currently saving a lot of money to buy a new one and I have my eyes dead set on Weston Grizzly skis. Thanks for the awesome review! You guys are the best! Emergency Tree Service