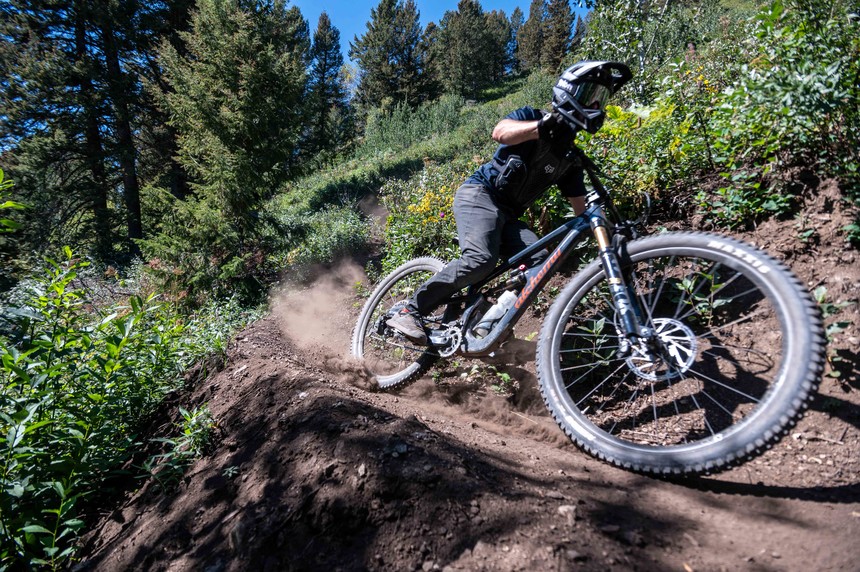 Alchemy's Arktos is a very versatile daily driver that encourages poppy, jibby riding - and with an interchangeable 150mm and 135mm build option, you can get two bikes in one. | Max Ritter photo.

On paper, the 2023 Alchemy Arktos 150 might look like just another enduro bike, but after a summer of testing it on all the trails around Jackson Hole, it has shown itself a worthy tool for big-mountain adventures. The Arktos 150 cleverly shares the same frame as the 135 and 120 versions, and by swapping the fork and shock, you essentially get two bikes in one (not counting the fact that it can be run as either a 29” or mullet-wheeled bike). We tested the bike in both its 150mm travel mode and in the shorter-travel and lighter 135mm build. In either capacity, it’s a fantastic bike for human-powered adventures in all kinds of terrain, with an extremely lively and poppy character that rewards active rider input and playful riding.

Alchemy Bikes are boutique bike brand based out of Colorado founded in 2008, specializing in high-end carbon and titanium frames. The Arktos frame is based around Alchemy’s patented SINE suspension system. Similar to Yeti’s Infinity Link, it’s a short dual link system where the lower pivot position moves slightly as the rear swingarm moves through its travel. This causes the rear wheel path to follow a sine-shaped curve, hence the name, allowing for a regressive/progressive/regressive shock stroke. Paired with an air shock like the Fox Float X2 or DPX2, this translates to very supple small-bump sensitivity, a very supportive mid-stroke, and a super-cushy bottom out feel. At the same time, the pattern minimizes chainstay growth, which keeps the suspension active under braking and improving pedaling efficiency over rough terrain. 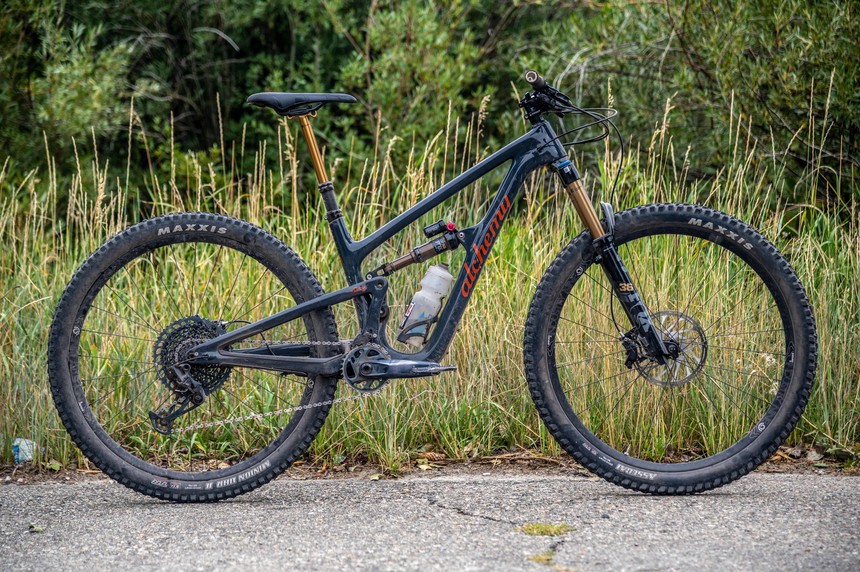 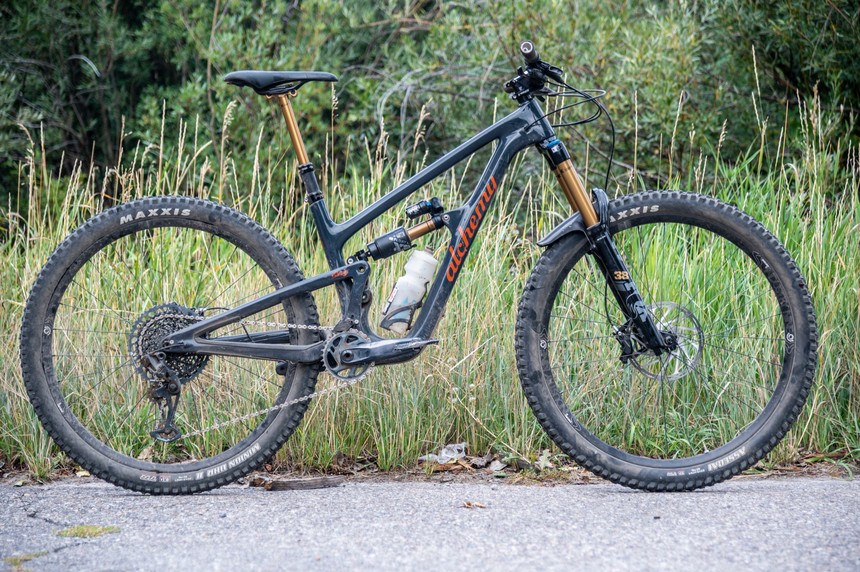 Geometry-wise, the bike is quite aggressive, with a 63.75-degree head angle and a 1222.5mm wheelbase. Reach is moderate at 452mm for the M, with a 437mm chainstay length across the board for all sizes.

Alchemy offers three build kit options for their Arktos frames. We tested the Arktos 150 GX, and were provided with the 130 Conversion Kit (essentially just a second fork and shorter-stroke shock to change the travel). The GX kit comes with a well-though-out component package for the bike’s intentions. Top-shelf components include a 170mm Fox Factory Float 38 and Float X2 shock (replaced by a 150mm Fox Factory Float 36 and Float DPX2 for the 135 conversion), a Fox Factory Transfer 175mm dropper post, and Industry 9 Enduro S wheelset mounted with Maxxis Assegai and DHRII EXO tires. Drivetrain duties are handled by a tried-and-true SRAM GX Eagle 12-speed groupset and braking is entrusted to Sram Code R brakes. The frame comes with a mechanic-friendly threaded BB and internal IS headset bearings. 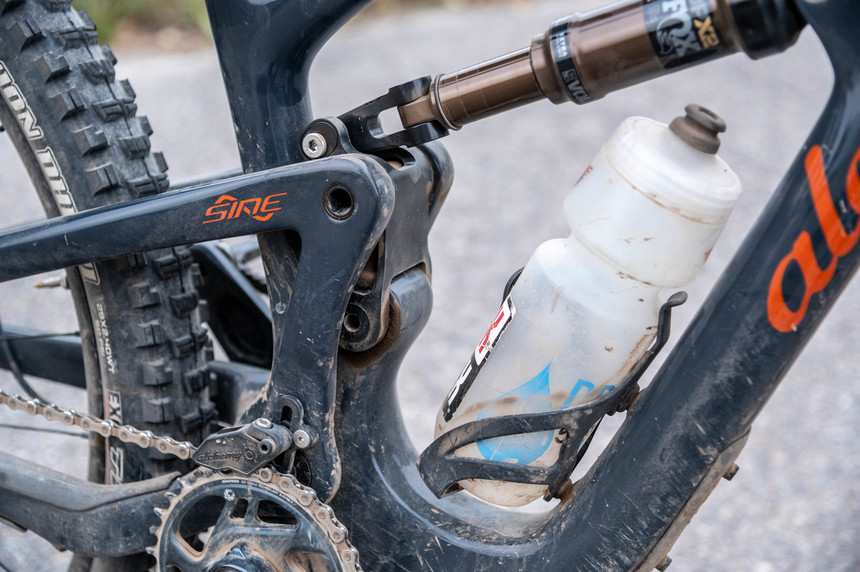 Both versions of the bike offer a very distinctive ride, so we'll split this part into two.

The Arktos 150 is one of the liveliest long-travel bikes I’ve ridden in recent years. At 170/150mm it might seem that the bike is more of a point-and-plow long travel bruiser, but it is quite the opposite – it’s incredibly agile, preferring to pop over roots and rocks on the trail instead of plowing through them. Coming off riding several more planted bikes recently, it took a little while to adjust my riding style to the Arktos. Unlike other bikes that tend to mute rider inputs and hold a line, the Arktos almost seems to amplify those inputs. It jumps incredibly well, seeming to add inches of boost to bunny hops on trail and comfortably loading up into big lips at the bike park. 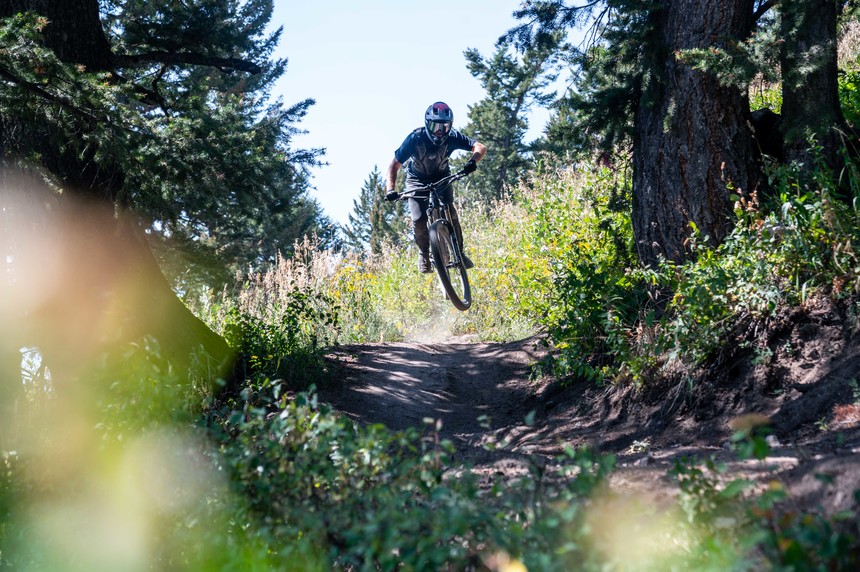 While pedaling flat sections of trail and climbing more technical bits, the lively character of the bike is a huge asset. It makes quick work of short technical steps and ledges, and directly turns pedaling input into forward motion with no suspension bob or sluggishness. In other words, it’s a long-travel bike that outclimbs most other bikes in its class.

On the flip side, at speed, the Arktos doesn’t nearly feel as stable and composed as I would have liked, but it’s certainly not squirrelly or skittish – it just requires a little more rider input to stay in control when going fast. On relatively smooth trails, the bike accelerates quickly out of turns and provides a poppy and playful platform to push into, but on chunkier trails it seems to get hung up unless you are pumping or unweighting the bike over obstacles. That pop does encourage you to simply jump over said obstacles – but that’s easier said than done for most riders. 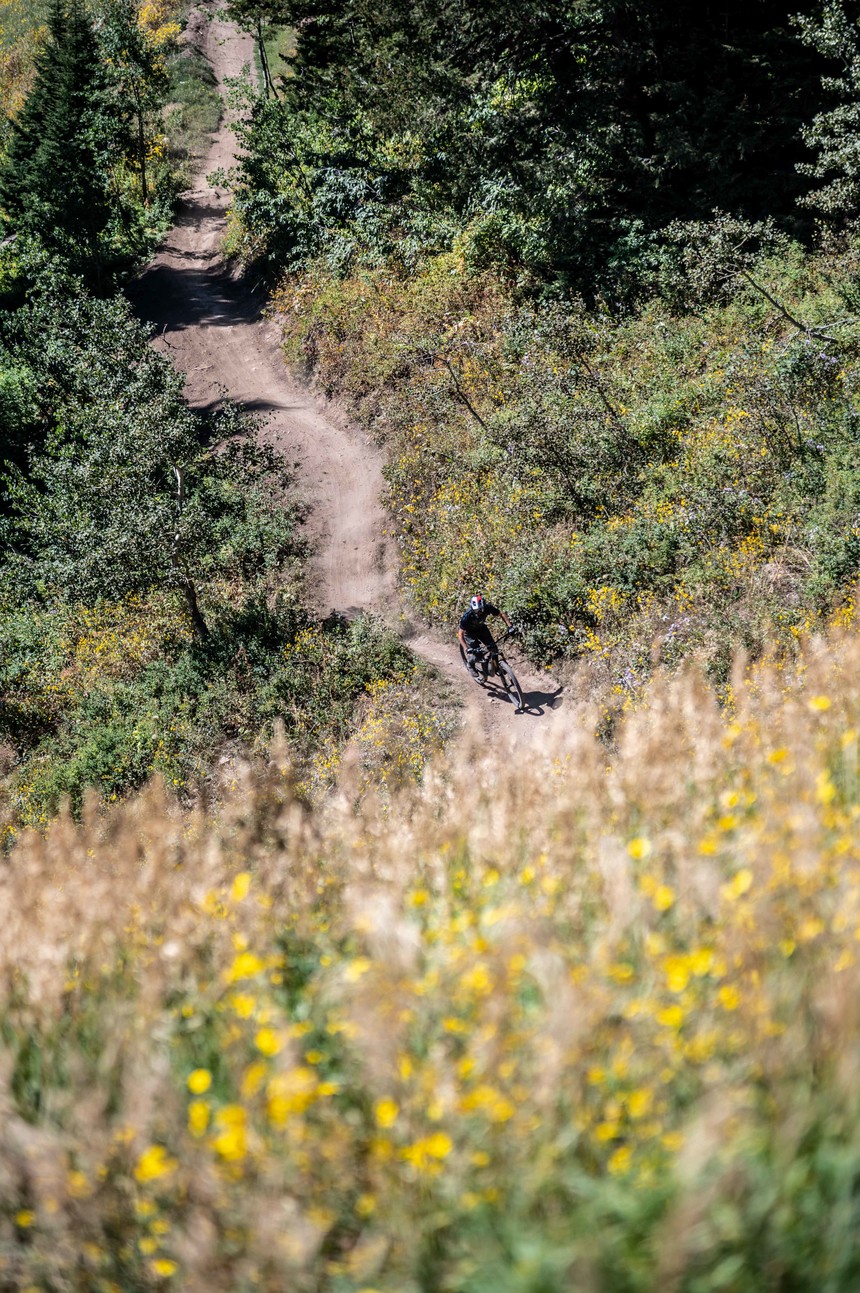 Under braking, the suspension stays very active – but I was not impressed by the performance of the Sram Guide R brakes. A more powerful and consistent set of brakes would be better paired with the rest of this impressively high-end build kit. Same goes for the EXO tires. XC-casing tires have no business being on a build intended to get rowdy, and after numerous flats I swapped them out for something meatier – problem solved.

Much like the 150, the Arktos 135 exudes a very lively, poppy character on the trail. In my opinion, the Sine suspension seems perfect for a bike with this amount of rear travel. The regressive top end of the travel works great to smooth out trail chatter, the supportive mid stroke encourages you put down the pedal strokes whenever possible, and the plush end stroke will help to erase some of your mistakes. 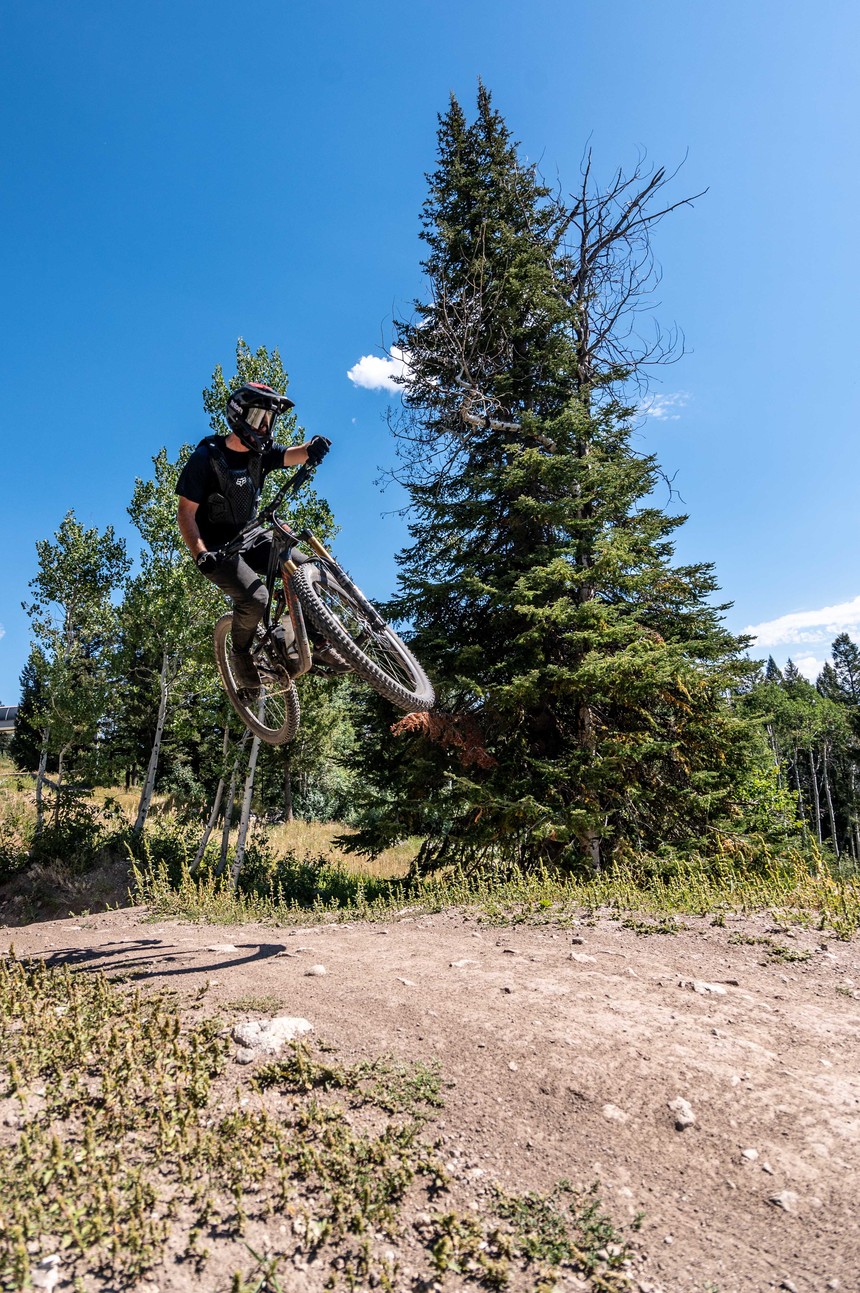 We've yet to find a 135mm-travel trail bike that jumps so well. | Max Ritter photo.

At speed, the shorter travel definitely feels like more of a trail bike – that is, it doesn’t feel as stable or plowy as the Arktos 150. But it’s even more responsive and is incredibly fun to toss around and pop off everything in sight. If epic backcountry rides or smoother trails are the majority of what you ride, the 135 is an excellent choice and will make any bit of singletrack a playground. I would hazard to say it would make a great adventure bikepacking rig too.

While not necessary for everyone, Alchemy’s multiple-bikes-in-one approach here is actually quite cool. Having the same frame platform (and the ability to run both full-29" and mullet wheelsets) across three different bike models begs to question what else it can do? In my eyes, there’s a big overlap in use case for a 150 and 135 rear end, so I would be very interested in seeing an even longer travel “super-enduro” bike to pair with a short travel rig. One can dream.

Overall, the Arktos 150 and Arktos 135 were incredibly capable machines that cater towards riders with an active riding style. While the 150 might scream “enduro race bike,” I think it’s better suited for long backcountry adventures that include lots of pedaling to get to gnarly riding – it simply felt like it required too much work to push its speed limit. If racing the clock isn’t your thing, then this bike would be an excellent choice. It would also make a super-fun park bike if your mostly into riding jumps and flow trails - the Arktos rewards the type of rider who sees the trail as a terrain park. The 135 is the perfect weapon for everyday trail riding. It’s predictable, pedals exceptionally well, is quite light, and put a smile on my face every time I took it out for a rip. 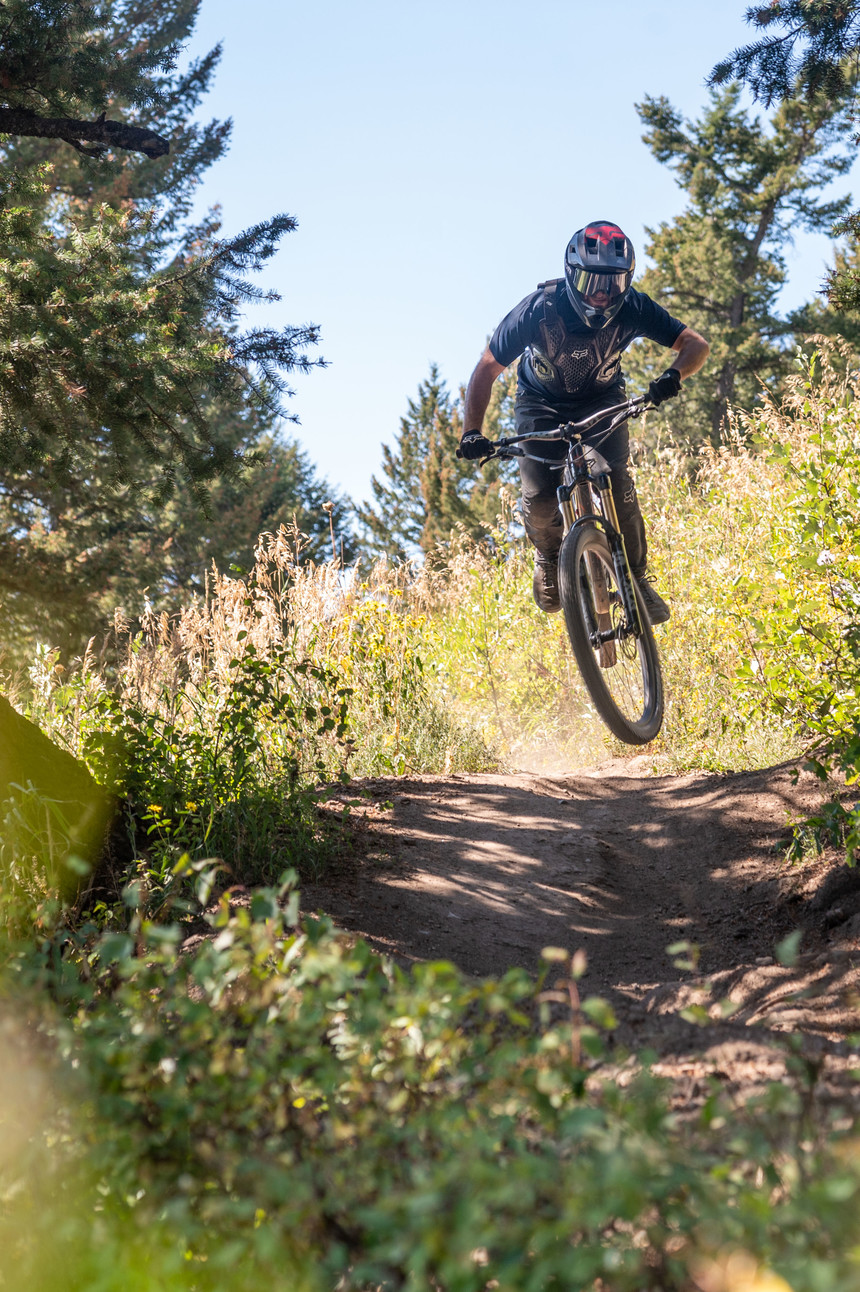 While the bike doesn't "plow" very well through chunky stuff, it makes the option of jumping over the chunder very easy. | Max Ritter photo.

Alchemy also offers a pretty sweet deal if you buy a new Arktos through their website. The customer will receive a free night at the Origin Hotel and gift cards to local brewpubs in Golden, Colorado to come pick up their new bike directly from Alchemy HQ, allowing for test rides and time with Alchemy to set up the bike perfectly. Bikes can then be either taken home in person or shipped via Kitzuma.

Where do I begin? From the first mile, this bike has exceeded my expectations. It pedals extremely well, and the geometry is right on trend, with a nice steep seat tube angle and roomy reach, as well as a short seat tube length and stand-over height. With the kinematics and the way the bike balances the minor bump comp, the suspension is dialed in. More about Where do I begin? This bike features a strong midstroke range that is lively and supportive, yet allows full utilization of the travel without the too progressive last 10-15% that other bikes have. | Pearland Concrete Contractors

I love this bike, it is insane, I recommend it to my fellow workers at Southend render

That’s amazing! Thanks for sharing this one. Flake garage floor https://www.epoxyfloorslexington.com/