Pro-model skis are a weird thing in the ski world – we love them in theory, thinking that they’ll make us ski just like our favorite pro, but in reality, they’re the kind of tool that most of us aren’t even remotely good enough to be using. Let’s be real, riding a ski designed for ripping movie lines in Alaska isn’t going to be all that fun if you’re not ripping said movie lines in Alaska. That’s kind of where Salomon’s brand-new QST Blank breaks the mold. Sure, it’s a pro-model ski (designed with heavy input from Cody Townsend and The Blank Collective crew - Chris Rubens, Alexi Godbout, and Stan Rey), but it’s one designed to be skied by an everyday ripper every day, any day, in all kinds of snow and terrain.

I was lucky enough to spend the first few months of 2021 riding it in and out-of-bounds at Jackson Hole Mountain Resort – perhaps the best testing ground for a ski of this caliber. In case you forgot, February was silly deep before the moisture stopped and the sun came out for the first few weeks of March, so I truly got to put it through its paces in every kind of condition. In short, the QST Blank has a split personality that feels like two freeride skis in one – a stiff, charging directional ski for making big turns down open terrain, mixed with the personality of a softer, fully-rockered powder noodle that’s easy to move around in tight terrain like chutes, trees, and pillow lines. 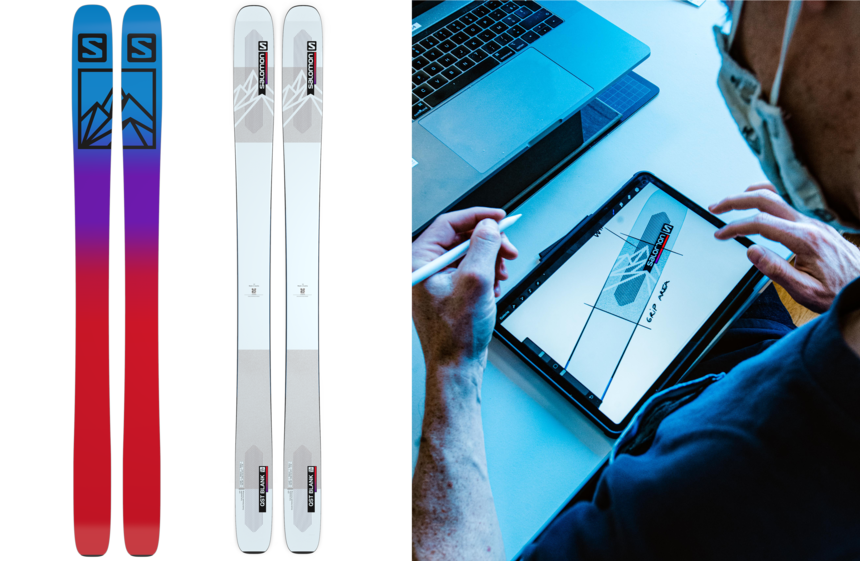 The Salomon QST Blank is a modern freeride ski through-and-through. At 112mm underfoot, she’s a big ‘un, but with a directional shape and a 17m radius designed expressly with versatility in mind, the ski goes from monster truck to go-kart if you just ask nicely. The shape features a short section of camber underfoot combined with an early rise in the tip and tail. For skiing inbounds, I must say a fully-rockered ski can get scary on groomers and hardpack, so the underfoot camber was a welcome addition in my book. Inside, the ski features all kinds of fun Salomon technology, including the C/FX super fiber found in the older QSTs, and perhaps my favorite name for a “material” I’ve ever heard: Cork Damplifier. Ha! All jokes aside, the ski feels really damp when charging through slop, so this wunder-material (built into the tip and tail) clearly works. I’m not usually one to judge a ski’s graphics, but in my book, the simple white topsheet and super-colorful bases of the ski look sick. 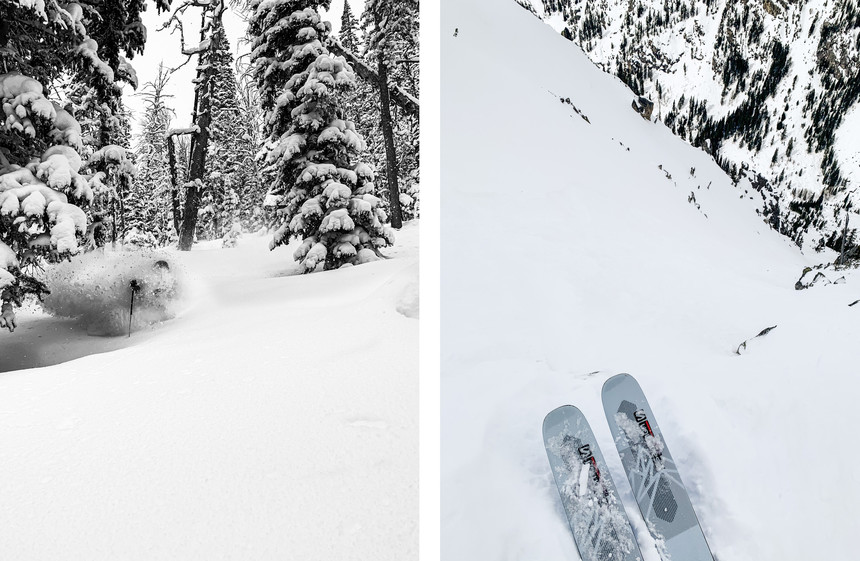 How Does it Ski?

I tested the 186cm version, mounted with a Salomon Warden 13 binding, while wearing Atomic Hawx XTD Ultra 130 boots. In the resort, the ski wants to go fast, rail big locked-in turns through any kind of snow and jump off anything in sight. It excels at skiing cut-up powder, windbuff and crud, monster-trucking through soft moguls in a way that truly takes the edge off in the same way a long-travel mountain bike smooths out the roughest of singletrack. At the same time, it’s easy to jump turn and smear through terrain like Tower 3 chute and launching airs into questionable landings. In the backcountry, particularly in places like the open slopes of Cody Peak outside JHMR, the QST Blank truly comes alive, giving you the stability to charge big open turns down committing terrain in a way I’ve never experienced before. Unlike many other skis designed to do that kind of thing well, the QST’s alter-ego is also easy to maneuver and smear around in tight trees and through technical pillows, where the tail releases easily, but the tip contact point grips into turns.  Take it into the trees, chutes, and pillow stacks of a place like Granite Canyon or Four Pines, and it will put a smile on your face, begging you to seek out new ways down technical lines.

The ski was not mounted with a touring binding, but a binding like the Salomon Shift would make sense if you’re planning on taking it any deeper into the backcountry. It’s definitely too heavy for any big vert missions, but if you’re looking at lapping shorter stuff or just want the peace of mind to be able to go back uphill in an emergency, it would be a solid choice.

-No speed limit. Confidence-inspiring for maching through bad snow a week after a storm.
-Tail releases easily if you need to dump speed in tight terrain.
-Solid and stable for stomping landings – particularly into deep or variable snow.
-Feels like 2 skis in one – the charger and the billygoat.

-At 2220 grams, It’s heavy. You better have done your early-season squats.
-Mount point seems pretty far back (even with the athlete recommended +2 mount).
-Too big for skiing tight, frozen, moguls – so avoid those if you can, but you should probably avoid those anyway.

Salomon’s QST Blank is one of the best skis the company has made to date, and it’s clear the athletes and designers did their homework when it came to designing a ski that can handle just about everything big-mountain riding will throw at you. I don’t really believe in one-ski quivers, especially for skiing inbounds, but with its split personality and ability to both charge and be maneuverable in tight terrain, the QST Blank might just convince me it can be the one freeride ski to do it all at a place like Jackson Hole.

Many outdoor brands are rethinking the way they make gear, and are finding some pretty clever planet-friendly solutions in the process. Max Ritter photo. When it comes to outdoor gear advertisements, we’re pretty accustomed to seeing all kinds of flashy buzz words to catch our attention. Sexy adjectives like lighter, stronger, or waterproof are usually written in bold next to a skier about to summit some majestic-looking ridgeline. These days, however, there’s a new word being added to

We all know that in mountain towns this past year, “working from home” often meant “shredding with your phone and taking calls from the chairlift.” We’re not sure what Kai Jones’s boss would think of this indisputable proof of playing hooky, but it sounds like he still made his 4 p.m. meeting, so all is probably well. And come on, with tricks like those, he might as well be employee of the month!