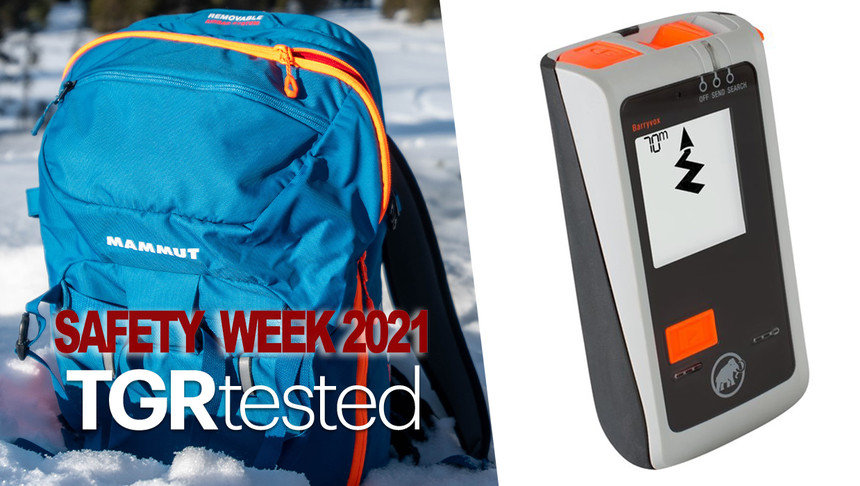 Mammut's avalanche safety kit is one that many of our athletes and crew trust, and after testing it at our International Pro Riders Workshop and in an epic Teton storm cycle that followed, we’re convinced it’s the perfect kit to keep you safe in the mountains. Max Ritter and Mammut photo.

Avalanche safety equipment is the kind of thing you need to be able to trust your life to. It needs to work 100 percent every time, with no compromises. When you or a buddy are buried in an avalanche, and the clock is ticking, there’s no time for doubt. That’s where Mammut’s avalanche safety gear comes in – we’re talking about the Mammut Barryvox beacon, Alugator Pro Light Hoe shovel, 320 Speed Lock probe, and the Light Removeable Airbag 3.0. It’s a kit that many of our athletes and crew trust, and after testing it at our International Pro Riders Workshop and in an epic Teton storm cycle that followed, we’re convinced it’s the perfect kit to keep you safe in the mountains.

Last year, we tested Mammut’s Barryvox S beacon, a pro-level avalanche transceiver that comes in a tiny, light, and extremely powerful package. We were duly impressed by that one, so we were eager to try out the simpler and streamlined Barryvox beacon. Where the Barryvox S is designed for professional users like ski patrollers and mountain guides who deal with complex rescue scenarios, the less expensive Barryvox is essentially the same beacon without some some of the pro-level features like analog search that a recreationalist would never use. 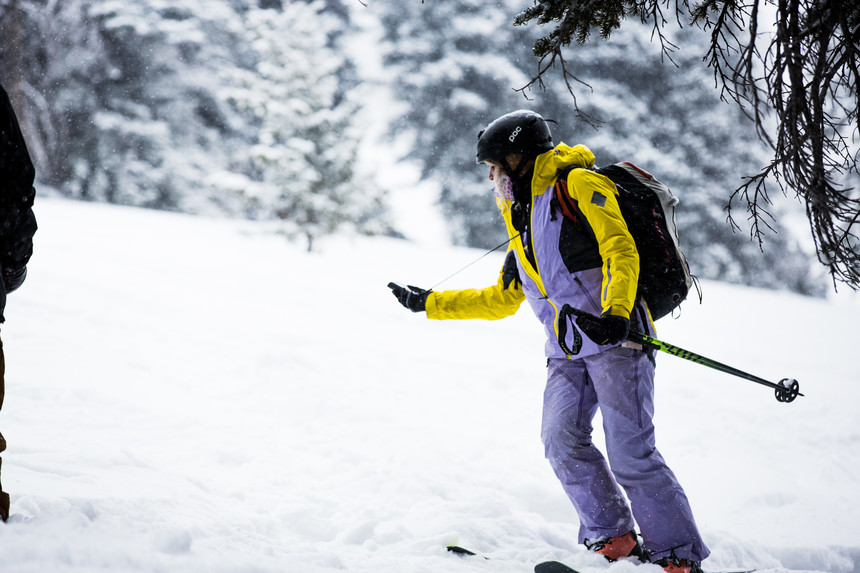 Simplicity and ease of use are paramount when it comes to avalanche rescue, and that’s what the Barryvox is all about. It’s got a large, easy-to-read display, a flag button and a simple locking switch (that cannot be accidentally bumped, trust me, I tried) to change modes from OFF to SEND to SEARCH. The display shows distance and direction to the strongest signal and the number of buried subjects in the case of a multiple-victim scenario. One interesting thing to note is that Mammut claims the beacon can run a search strip of a whopping 70 meters, meaning that it can theoretically pick up signals from up to 70 meters away. During TGR’s International Pro Riders workshop, our instructors did note that it still makes sense to run a smaller search strip while using this beacon, closer to 50 meters, just to be sure you don’t miss a spot.

In terms of battery life, the beacon runs on three AAA batteries (which are included in the box). I only tested the beacon for about three weeks, but even with heavy use (putting the beacon in search during practice burials puts a bigger drain on the battery), I didn’t get the battery to go below 90 percent. The beacon comes with a comfortable carrying harness but can be carried comfortably in an internal pants pocket thanks to its small size and integrated leash.

Mammut’s Barryvox beacon does exactly what an avalanche beacon needs to do and does it flawlessly. If you’re just getting into the sport, or if you are a die-hard recreationalist with a beacon that might need replacing, look no further.

Though simple tools, not all probes and shovels are made the same. As part of our avalanche safety kit, we tested the Mammut 320 Speed Lock probe and the Alugator Pro Light Hoe Shovel. 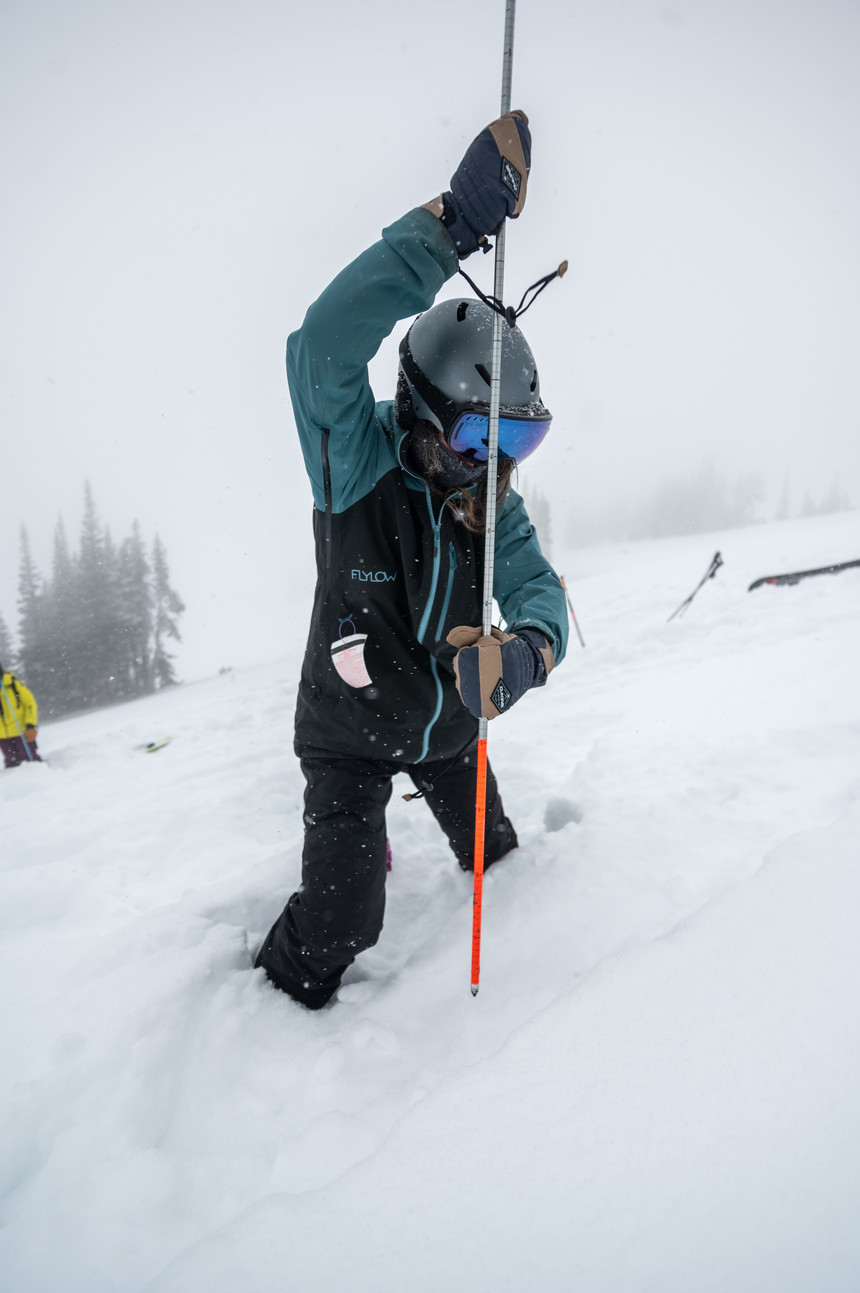 Mammut offers a whole range of sizes for avalanche probes, from shorter 240cm probes to the 320 cm version we tested. In places like the Tetons, the snowpack gets so deep by mid-winter that we prefer carrying longer probe lengths. Of course, they make it possible to find victims buried deeper in the snow, but the extra length is also nice for probing weak layers and objects in the snow once it gets really deep. The 320 Speed Lock aluminum probe uses Mammut’s innovative Speed Lock system that makes deploying the probe effortless. Toss the segments into the air, pull the internal string tight, and it will automatically lock in place ensuring a rigid probe that’s ready to use. It comes with centimeter markings along the full length of the probe to give you an exact idea how deep a burial or snowpack is. It packs down to a 45cm length, fitting into most any backpack, and only weighs 340 grams. 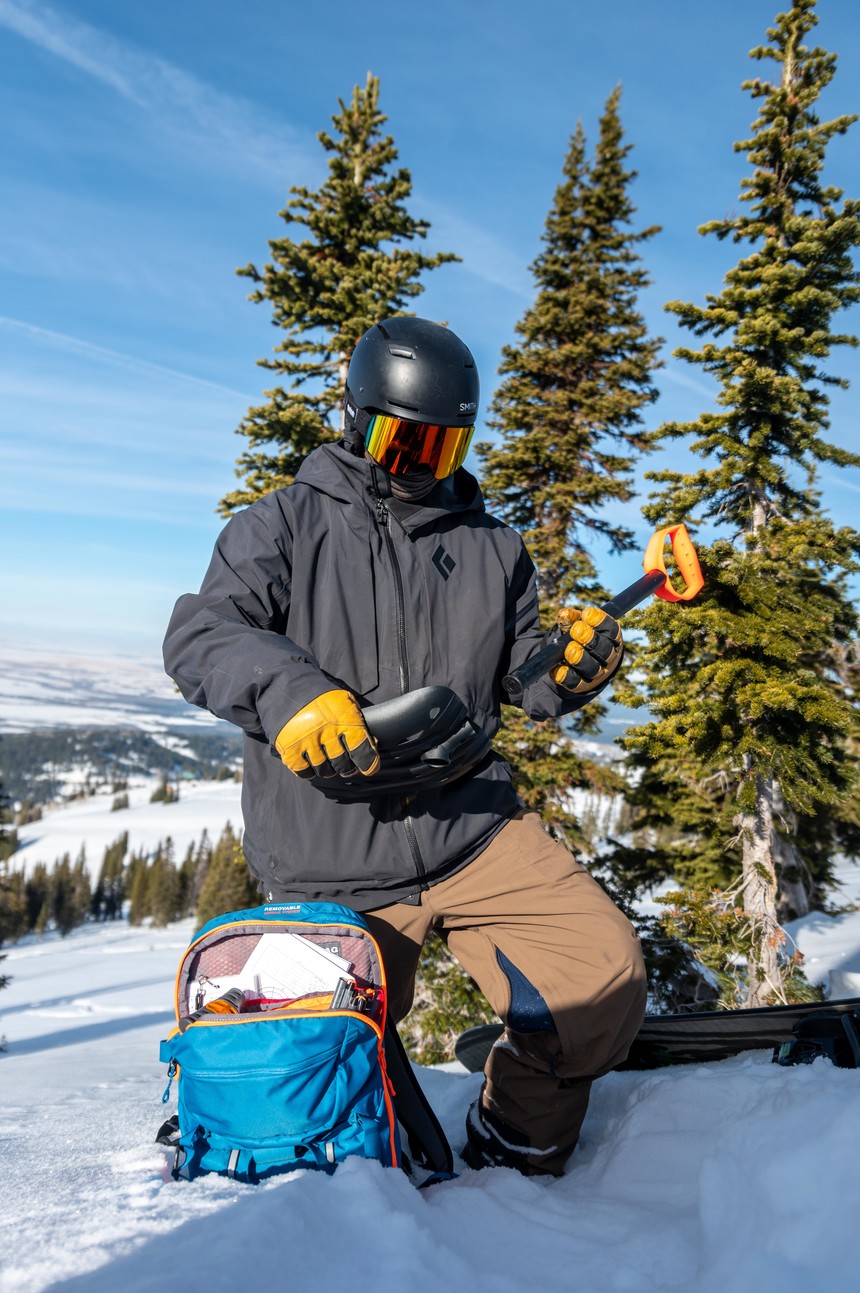 Shovels with a hoe mode are perhaps the greatest thing since sliced bread. Being able to quickly convert a shovel into a hoe makes moving large quantities of snow infinitely easier. In the case of an avalanche burial, it means saving precious seconds when uncovering a victim. If you’re merely digging a snowpit, you’ll still be impressed by how quickly and easily you can excavate a hole for an ECT. Mammut’s Alugator Pro Light Hoe shovel checks all the boxes. At 675 grams, it’s light enough to disappear into your bag until you need it. The flat-backed blade is large enough to chop through and move snow quickly, while giving you clean cuts for those perfect snowpit wall profiles. Last but not least, the hoe mode makes moving massive amounts of snow much easier when every second counts.

The final piece of the puzzle is finding a way to carry all your gear into the backcountry. Avalanche airbags are not a guarantee of safety in avalanche terrain, but I have witnessed firsthand that they can and do save lives when a slide occurs. Mammut has been in the avalanche airbag game longer than most, and the latest iteration of their Light Removeable Airbag 3.0 is their best one yet. 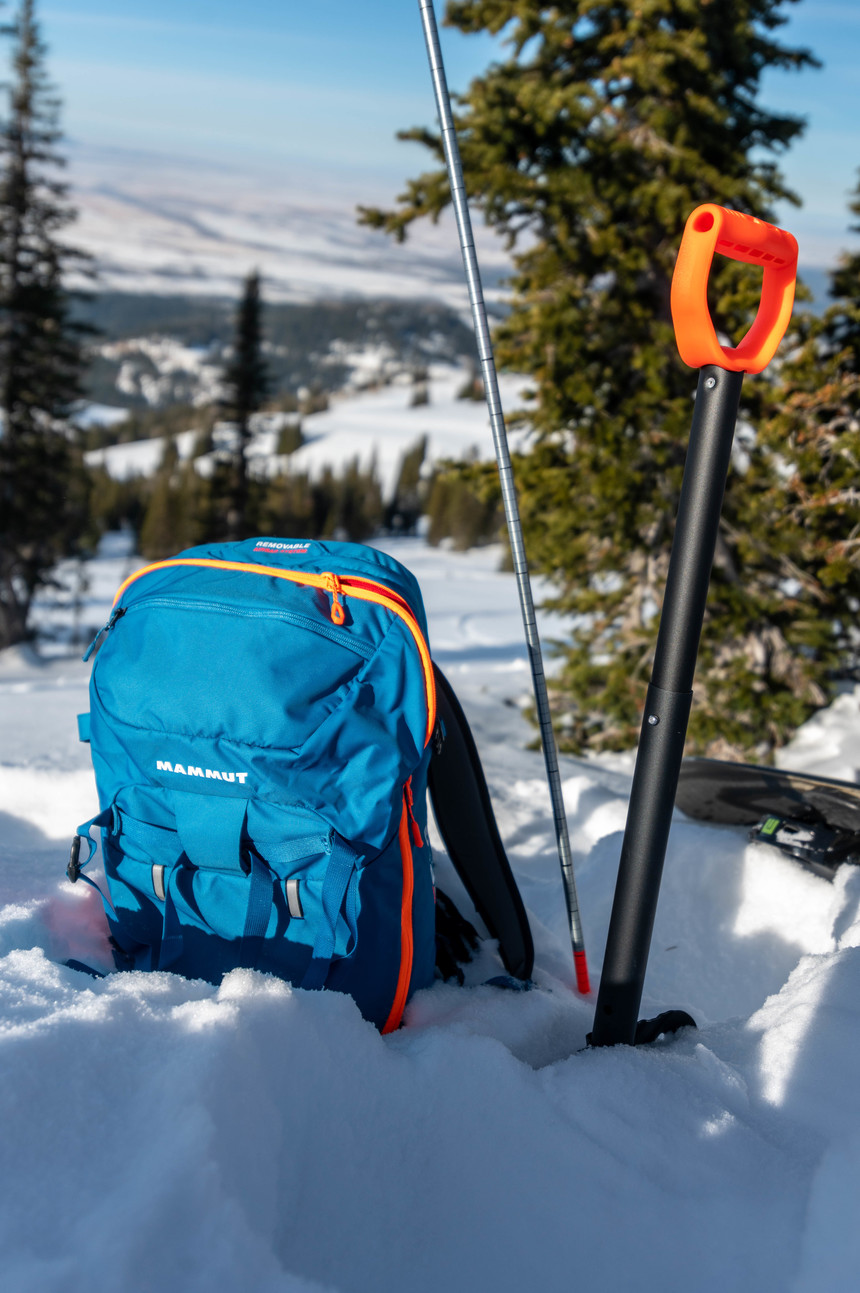 At the core of the system is Mammut’s Removeable Airbag System (RAS), a compressed-gas canister airbag system that comes in at an impressively light 2.2-pound weight. The entire system is also removeable from the bag, in case you wish you to use the bag without the airbag. The RAS system only takes up 2L of space in the 30L backpack volume. The bright orange airbag deploys very rapidly, though unlike some electronic systems on the market, the cylinder can only power a single inflation.

The backpack itself is an elegantly basic affair that’s designed with low weight and simple features in mind for gram-conscious skiers and riders putting in big days in the mountains. Upon first impression, the bag is incredibly light, despite its 30L volume and full feature set. Mammut claims a weight of 2190g (under 5lbs) for the whole system, thanks to the 100 percent polyamide construction. The bag features compression straps, a vertical snowboard carry and diagonal ski carry system, dual ice axe loops, and a padded hip belt with a pocket on one side and a gear loop on the other. Avalanche gear is stowed in a separate front pocket, though to access this pocket, you do need to unzip the main compartment zipper first. While not a huge deal, I strongly believe accessing avalanche gear should be a one-zipper affair.

Skiing and riding with the pack is very comfortable, thanks to its light weight and sensible shape. I’ve tested too many backpacks that I simply don’t like to ride with because the straps and overall shape of the bag don’t seem to made with consideration towards the human body. Luckily, Mammut hits the nail right on the head – we asked numerous skiers and riders of various body sizes to take a few laps and they all agreed. This bag is also available in a shorter size for those of us with smaller torsos.

Packing smart can make a big difference in the backcountry. Max Ritter photo. When most of us head out into the backcountry, it’s likely for a day trip. But regardless of how long you plan to be out in the wild, you should always pack for the off-chance of spending the night. Preparing for the worst isn’t overkill, it’s being smart and realistic. Backcountry skiing and snowboarding are unpredictable sports. We can all do our best to mitigate risks and make a thoughtful plan, but the

Every winter you should be practicing with your beacon. Katie Lozancich photo. The most important aspect of beacon fundamentals is simple: practice. It's imperative to get to know your own beacon, its functions, and how to switch to search quickly. Practice search drills regularly throughout the season and repeat the process when you buy a new beacon. Here, we break down the search process into four phases with what we learned at this year’s IPRW while practicing with our Mammut Barryvox