When it comes to blinging out your bike to Jay Z levels, no single upgrade does like an aptly-named Enve carbon wheelset. Few companies in the bike world have nailed their marketing and aesthetics better, with loud, neon-tinged graphics that have produce salivating jealously at trailheads and parking lots around the world.

Of course, you’re not paying well north of two grand just for some rims with cooler stickers (please? Please…). Enve’s hand-built carbon wheels are as known to be as stiff as rebar and tougher than brick shithouses, often require no trueing despite years of abuse, and are backed by customer service whose attentiveness would make Verizon balk. 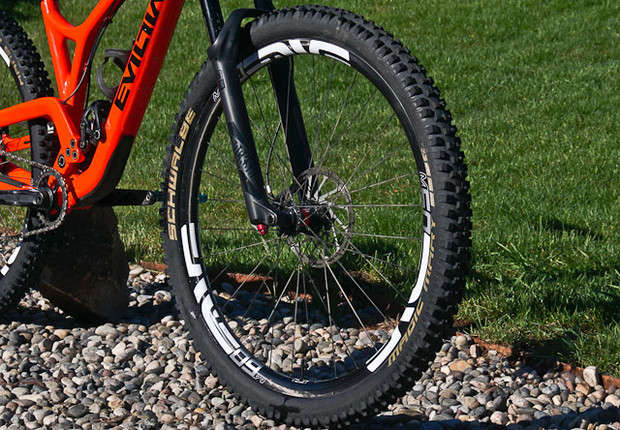 There will be no mistaking what kind of wheels you're rocking when you roll up to the trailhead. Ryan Dunfee photo.

We tested a pair of 29” M60 Forty HV wheels on an Evil The Following over the course of this summer. Enve’s various but always expensive M Series offerings are named in proportion to the percentage of downhilling you’re expected to do, with the M60 Forty being their most popular and widely-accommodating model, designed for all kinds of trail and all-mountain riding and bikes rocking between 110-150mm of travel.

Most #endurbro riders will want them, to, as the M70’s, which you often see on Enduro World Series bikes, are so much rim that you probably don’t need them unless you’re doing strictly shuttle laps or really pushing bikes with upwards of 160mm of travel. 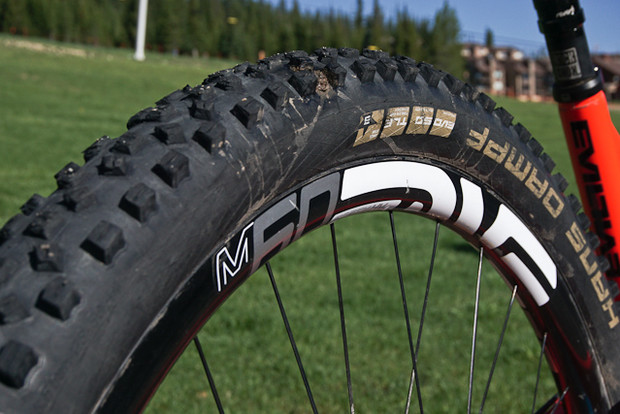 The M60HV's have a 32mm external width and a deep, 28mm dish. Ryan Dunfee photo.

The M60HV measures in around 1690 grams for a built 29” set – the 27.5” hoops shave about 100 grams – and are relatively deep, sitting a rock-defying 28mm tall. Not the most fad-wide rims out there, the M60HV sits at 26mm in its internal width and 32mm on the outside, with a hookless bead that seated tubeless tires fairly painlessly and has yet to burp. HV in this case stands for High Volume, Enve having rolled out this slightly wider profile rim for 2.3-2.4” tires. Enves use triple-butted (and bladed) DT Aerolite steel spokes, and while it offers a number of hub options, ours came with the standard DT Swiss 240's, which work just fine… 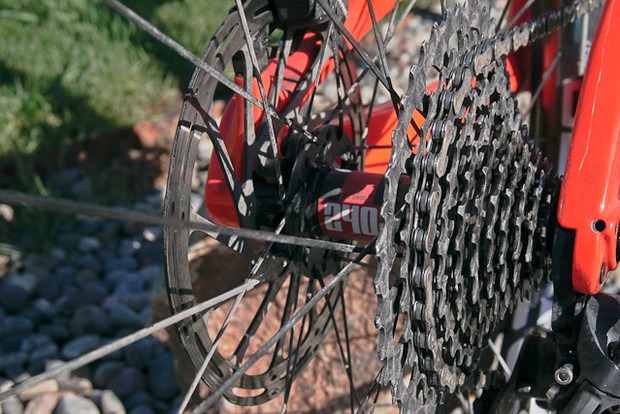 Ours came with DT Swiss 240 hubs, but you can switch to Chris Kings as well. Note the flat, bladed spokes for maximum stiffness. Ryan Dunfee photo.

Even just by tugging at the bladed aluminum spokes – whose nipples, in the unlikely case you’d ever need to true them, are tunable only by taking the tire and rim tape off the rim - you can feel how little give there is in this wheelset. Enve says that, by not drilling into the carbon to accommodate more traditionally-tunable spokes, they’re able to keep the carbon stronger still.

It's worth mentioning that, especially at this investment's price point, Enve packs a pretty serious warranty. If you're the original owner, and you crack a rim anytime within your first five years riding them, they'll replace the rim at no charge. Stay the original owner, and break them in all kinds of ways - crash hard, drive over them even - and Enve will replace your wheel for 50% of MSRP.

And What About The Ride? 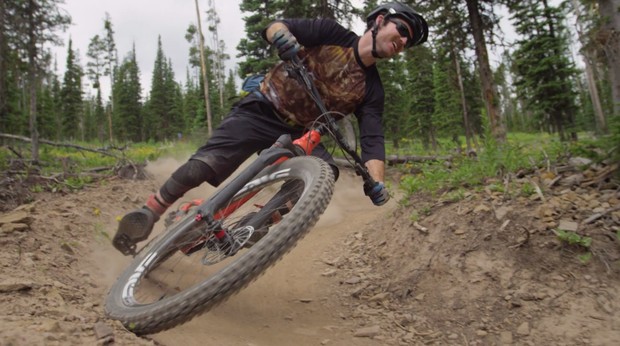 Be prepared for the most F1-style cornering experience of your life on these wheels. Austin Hopkins photo.

The first run down the Big Sky Bike Park with the new wheels was actually wholly dissatisfying. Putting down Nameless, an amazingly fun and mostly natural singletrack descent with a few slots of puckering steeps, lots of trail rubble, root, rocks, g-outs, and stump hucks with some bermed sections towards the bottom, I was immensely frustrated, my timing completely off. I’d come into a corner feeling normal and completely understeer, blowing out into the woods. The trail felt far rougher. And every time I popped out of a berm, I’d be halfway into the next corner before I even knew what was happening.

What was really going on was that I needed to catch up. After a few more runs, I was moving over the bike faster, committing the corners more zealously and with more lean angle, and simply pushing the bike harder. And all of a sudden, it all made sense. Riding Enves is like skiing a freshly-tuned pair of slalom skis; get lazy and off the back and you’re going to get bucked. Ski forward, aggressive, leaning hard into that sidecut, and now you’re cutting corners tighter and harder than you ever thought possible. 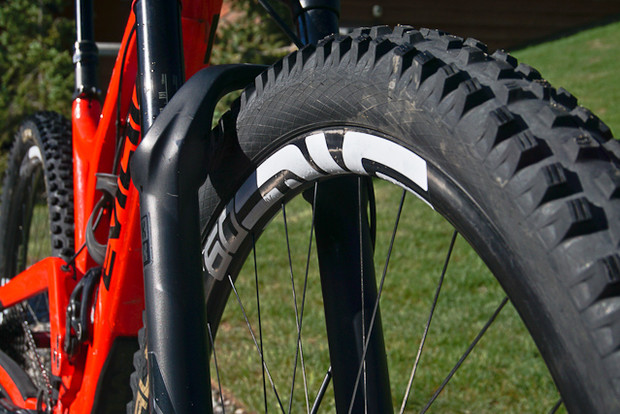 Enves are simply outrageously stiff, so much so that you'll have to really change your riding style to accommodate. Ryan Dunfee photo.

Ridden with intent, Enves are simply incredible. The extra speed they generate out of every corner, berm, and transition adds another two gears to the top end of your transmission. Gleefully slamming into a g-out in a train of testers, I felt the bike accelerate like it had afterburners, and was immediately on the tail of the guy in front of me. You could push the bike recklessly fast into flat corners, knowing that, when you laid the bike slideways, the total absence of lateral flex in the wheels would hold an edge, again, like slalom skis. Berms could be hit harder and at such a deeper lean angle compared to an alloy wheel. Every ounce of gravity pumped into the dirt was delivered as pure trail speed coming out the other end.

Riding Enves is like skiing a freshly-tuned pair of slalom skis; get lazy and off the back and you’re going to get bucked. Ski forward, aggressive, leaning hard into that sidecut, and now you’re cutting corners tighter and harder than you ever thought possible

All the while, they remain unfazed by even the most severe beatings on the trail. It really feels like a different sport on these things.

Of course, all the speed-enhancing properties of these nuclear-strength wheels also highlight its main drawback: Enves can be harsh. With so little flex in the wheel, you feel every inch of the trail far more distinctly, and gnarly rock gardens cannot be plowed through as thoughtlessly as they might on rims that bend more up and down, a term known in nerd circles as vertical compliance. There’s more deflection when you collide with a rock at a tough angle, and if you had a big night out on a Friday, an all-day epic riding tech trails on Saturday can beat you up.

However, Enve maintains that your actual stiffness can be fine-tuned by choosing different hubs, different spokes, or fewer spokes, as Enve offers either a 28 or 32 spoke count.

Knowing what kind of trails you ride, how nimbly you ride, and how much stamina you take to the end of those rides will help you make the decision about whether Enves are for you, and obviously, the more travel you’re rocking, the less this all will matter. Enve also maintains that you should keep your tire pressure about 2-5 psi lower than you would on the alloy wheelset you're likely coming from due to the increased volume and stiffness of the Enves.

While The Following wants to ride the same terrain at the same speed as a 160mm bike, its short, 120mm of rear travel highlighted the harsh ride more than would have been felt on a bike with bigger pogo sticks. 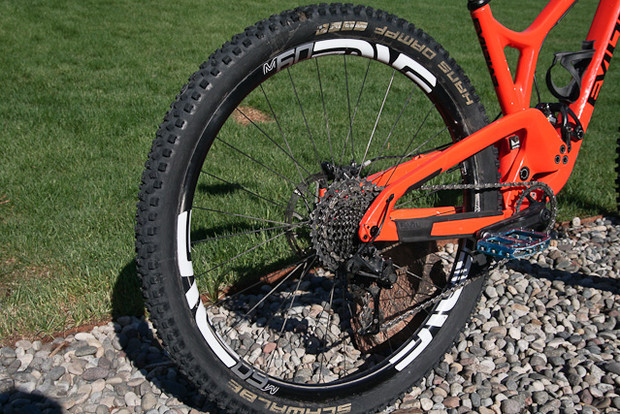 As much performance as bike bling, a set of Enves will truly change your ride. Ryan Dunfee photo.

The short of it is that Enve wheels deserve their hallowed reputation. They change your ride as much as they change the aesthetics of your bike. They are absolutely bomb proof left, right, and sideways, and the difference they make in trail speed is plainly evident. They require an active, aggressive pilot to match the belligerent style of riding they inspire, and don’t like to bother with the lazy or timid.

Of course, you’ll have to be honest with yourself about what kind and level of rider you are – demoing a set probably won’t hurt, either – and then decide if retirement can wait until age 77 so you can drop $2,700 on two round discs that sit on a toy that you can’t use to get to work, pick up groceries, or really do anything practical with other than having an amazingly good time.

But, just like with a Ferrari, it’s not just about the flashy paint job. There’s some serious engineering behind this wheels, and the things work.

From The Column: Teton Tested

It’s a good day if you’re in the market for a new mountain bike. Transition, Yeti, and Commencal all released fresh new bikes yesterday (on top of the Specializeds, Cannondales and more Commencals that just recently came out). In what’s becoming a bit of a trend in the mountain bike world, both Transition and Yeti released short-travel trail snipers – what some may go so far as to call cross-country bikes – a new direction for brands known for their bikes that perform best when pointed

BCA Has a Software Update For the Tracker 2 Beacon

BCA Has a Software Update For the Tracker 2 Beacon

Backcountry Access has released a software update for all Tracker 2 units. BCA photo. For anyone who owns or uses a BCA Tracker 2 avalanche beacon, a software update was just released that BCA recommends you take advantage of. Fill out the form on BCA’s site, and ship your unit to the factory to receive the update for free. See the official notice from BCA below: RELATED: Phantom Introduces First Dedicated Hardboot Splitboard Boot Backcountry Access, Inc. (BCA) has announced a software