This Kickstarter is for all of you ski tourers who care about the numbers: the slope angle, amount of kick turns, the temperature, distance, speed, and time of your backcountry trip. Called the Pomocup, it's the Fitbit of the backcountry world, and it's made by Swiss ski enthusiasts who have been studying human movement for the past 15 years. "A simple and practical tool to measure the data that matters, providing realtime feedback during ascent," CEO Benoit Mariani said.

Attaching to the front of your ski, it displays the current information much like a treadmill does. The screen also uses an OLED display that's easy to see in snow or sun. This little device also has the capacity to store 800 hours of ski touring information. 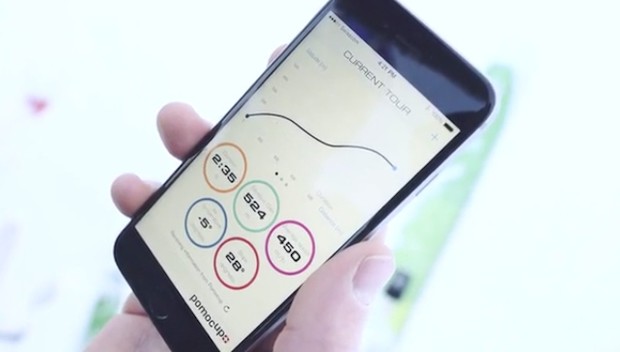 The app accompanying the Pomocup can allow users to see their daily stats. Picture taken from video above.

Mountain guide Denis Trento said the Pomocup helps him guide his guests in the backcountry by being able to keep better tabs on the cadence and security of his trips. "With Pomocup, it's easier for me to teach my guests how slope and temperature can increase the risk of avalanches," Trento said.

By bringing metrics to the judgment calls made in the backcountry, it is believed a device such as this one can help people make smarter decisions in terms of the risks they take.

The first Pomocup prototype was also used in 2015 by the Swiss Ski Team preparing for the World Race Championship.

The kickstarter ends on February 29 and shipping of the Pomocups will happen in September and October of 2016, according to their.

Ever heard of Jake Hopfinger? Well after he stomped the first double backflip into Corbet’s during the 2020 Kings and Queens of Corbets comp on Tuesday, he’s sure to be a name to remember. Hopfinger is a up-and-coming freerider from Montana who definitely knows a thing or two about air and style – and going absolutely MASSIVE. RELATED: Veronica Paulsen Becomes First Woman To Land Corbet's Backflip

A backcountry skier in Colorado captured this crazy video of two huge avalanches on Jones Pass outside of Winter Park, Colorado yesterday. Both were set off intentionally by avalanche mitigation bombs and allude to the avalanche-prone conditions that still exist in Colorado. RELATED: Avalanche Cycle Blasts Montana's Flathead Range General elation ensued after a deluge of new snow last week, however this also means that the Colorado snowpack still poses considerable avalanche danger.

Eleven British nationals are quarantined after exposure to the Coronavirus; five of them have tested positive. Wikimedia photo. Five guests at a ski chalet in the Haute-Savoie region of the Eastern French Alps recently tested positive for the coronavirus, or 2019-nCoV. Six other individuals across France, Switzerland, and England are also under quarantine after all eleven came into contact with an infected British businessman who recently returned from a trip to Singapore.  RELATED: X