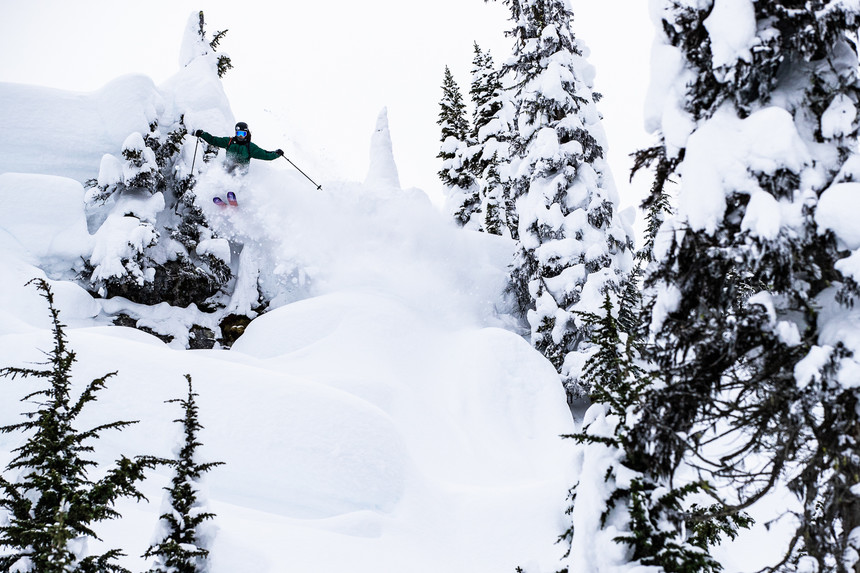 In case you haven’t figured it out at this point, snowmobile-access skiing is pretty damn fun. And when you’re as good as Nick McNutt, that fun meter gets turned to 11, especially when it means you get to access some of the deepest snow and best terrain in the northern hemisphere like he does in TGR's Make Believe. Of course, this very specialized type of skiing requires some special gear, so we chatted with Nick about what he chooses for sled missions and some advice for anyone getting into the sport this winter. Weight is less of a concern than for pure touring days, but having the ability to go uphill beyond where the sled can take you makes all the difference. That’s why Nick is such a fan of his setup from Atomic Skis, including the pow-slaying Bent Chetler 120, the powerful and reliable Shift binding, the comfy yet powerful Hawx Prime XTD 130 boots, and the comfy and stylish protection combo of the Four AMID Pro CB helmet and the Four Q HD Team goggles.

Nick’s ski of choice and daily driver is the Atomic Bent Chetler 120. You’ve probably seen him on the many different iterations of the ski over the years, landing and taking off every which way, and stomping some of the most incredible pillow lines out there. The nimble yet powerful character of the ski is what makes it all possible, no matter how deep the snow or how aggressive the line. On his feet, you’ll find the Hawx Prime XTD 130, a boot that truly does it all – walks like a touring boot and skis like an alpine boot. It also comes in a narrower width as the Hawx Ultra XTD. 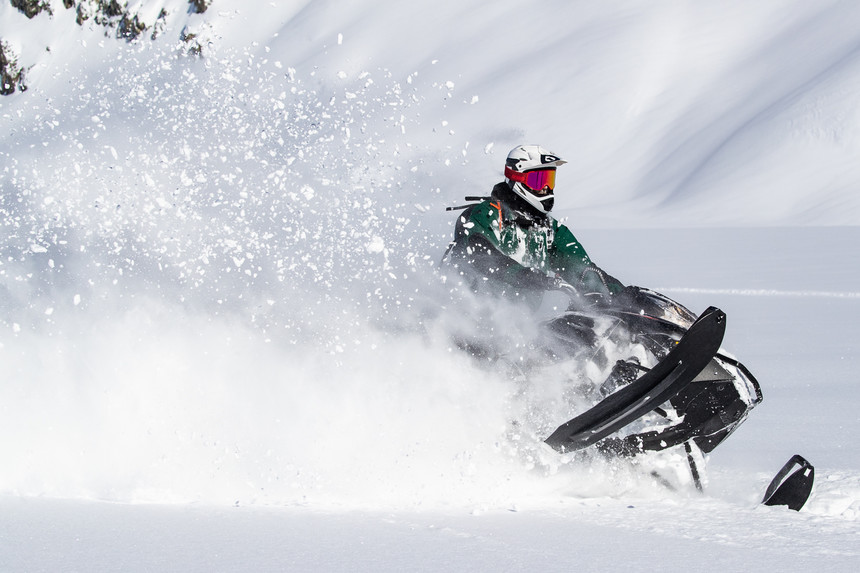 Weight is less of an issue when a motor is involved, so Nick brings out the big guns like the Bent Chetler 120 on sled days. Eric Parker photo.

Finally, the Atomic Shift MNC 13 binding is every big-mountain skiers dream, giving the power transfer and security of an alpine binding on the descent, mixed with the touring comfort of a pin binding for getting uphill. The combination of the three is what Nick considers the perfect balance of weight and performance. Sure, for big touring days, you might want something a little lighter, but with the extra help from a snowmobile, you’ll be happy to be skiing something with a little extra heft! 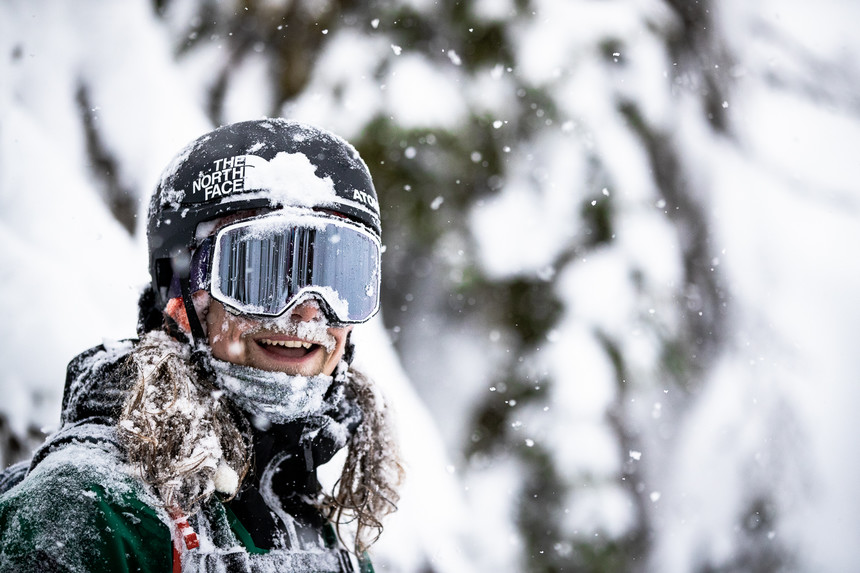 Stylish and safe thanks to the Atomic Four AMID Pro helmet and Four Q HD Team goggles. Eric Parker photo.

This setup allows me the best of all worlds! A no-compromise stiff boot that walks super well and had good grip for riding the snowmobile or rocky ridge hikes. My everyday ski that I love and use in pretty much all conditions, paired with a super lightweight binding that can handle big hits and still come off of it needs to. 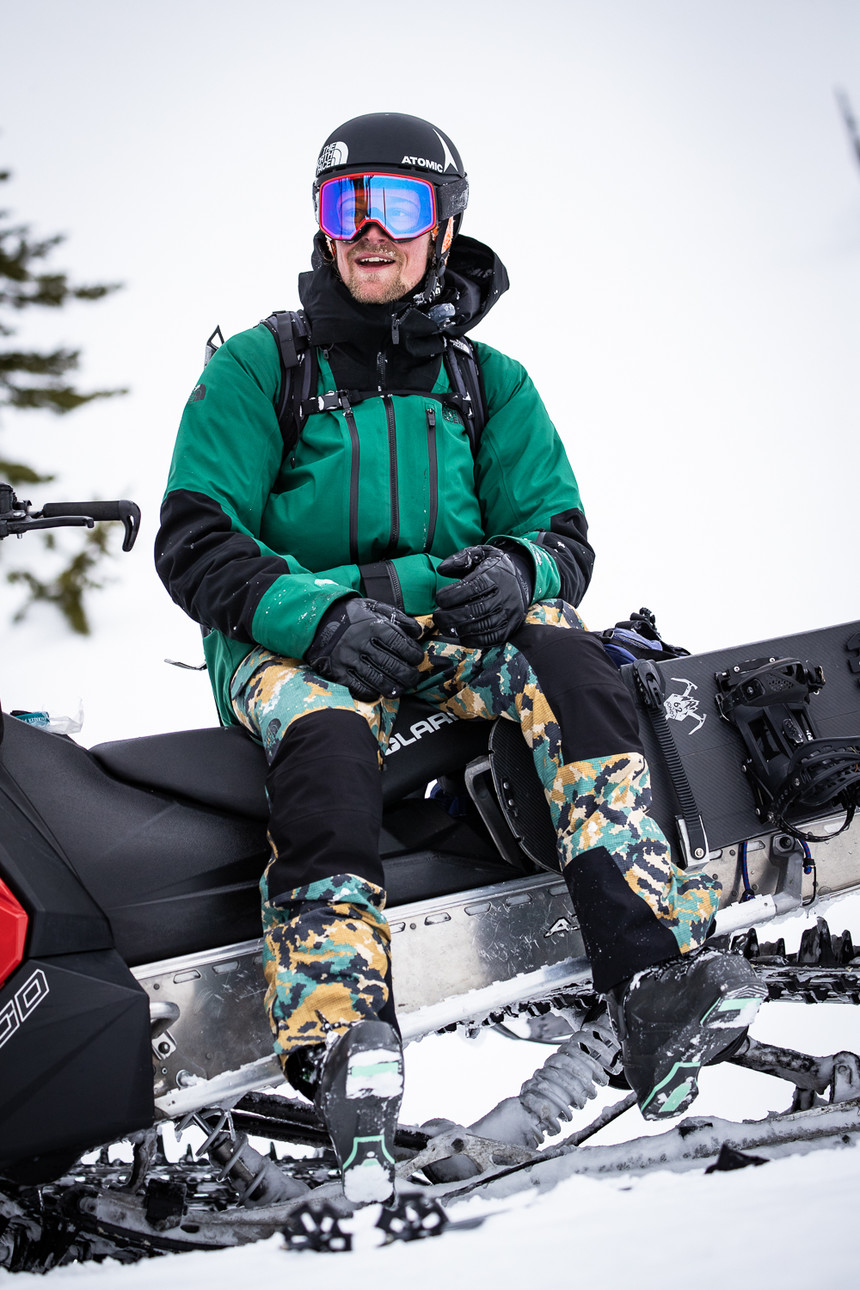 Sledding in ski boots is never ideal, but with the grippy rubber soles and walk mode on Atomic's Hawx Prime XTD boots, you won't find yourself switching boots on every lap. Eric Parker photo.

Of course, learning how to snowmobile is an art in itself. Nick has been riding these machines for a decade now, and has gained some valuable experience he wants to share. One incredibly important thing to remember is you are bringing another huge variable into the backcountry, so use extra consideration when planning a day around a snowmobile mission – these machines are a powerful tool, but they can be incredibly dangerous, especially in big mountains.

Snowmobiles are a powerful tool to access big mountain skiing, but Nick stresses the importance of safety and understanding how to ride these machines before venturing out in dangerous terrain. Eric Parker photo.

I’ve been sledding for just over 10 years, and I’d say the biggest mistake I made when learning was thinking that I should try to ski right away. Leave the ski gear at home and really spend some time at the beginning learning to ride the machine and get yourself un-stuck. Skis strapped on to the sled make this way harder and, in reality, you’re not going to ski right away unless you’re only driving on groomed roads and touring from there.Also, don’t wear your ski boots! Bring them in a waterproof duffle and change into them when you’re ready to ski. It’s way, way more tricky and uncomfortable to drive in ski boots and I learned this the hard way!

Awesome to see some excellent points on back country sledding and skiing.

Caite chilling on the patio for a little aprés at Jackson Hole. Nic Alegre photo. Caite Zeliff is blowing up!  We're not just talking the bomb-holes at the bottom of a huge, double-stager cliff either. She is truly on her way to being one of the next superstars in skiing. The self-professed goofball has had a dream of becoming a pro skier for a long time but her journey has taken a few big setbacks. Her plan was to become a member of the US Ski Team. Ultimately, after many attempts and