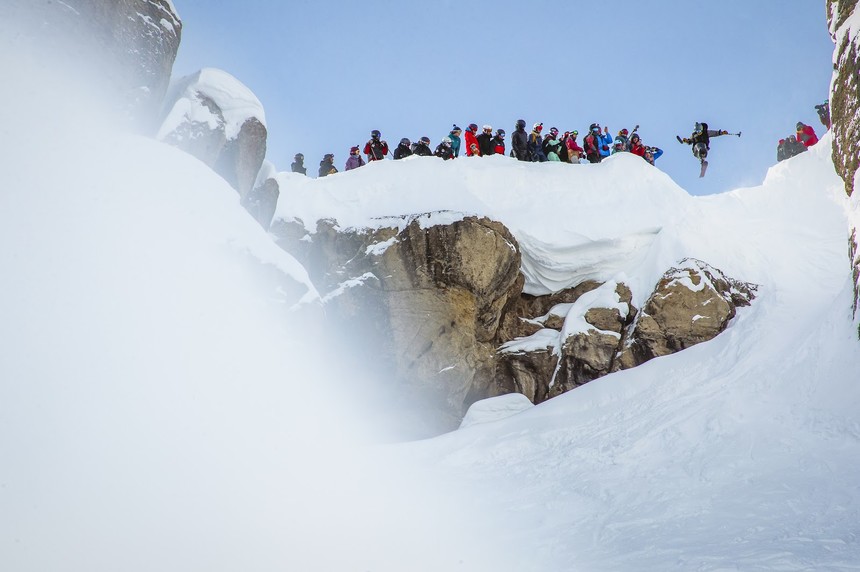 When snowboarder Trevor Kennison hit the ground on that fateful day in 2014, he immediately thought it was all over. A morning of riding fresh powder and hitting jumps on Vail Pass had suddenly turned into his worst nightmare. Kennison had just broken his back and his life was about to change forever. He was paralyzed from the waist down.

The story doesn’t end here, though. Fast forward a few years, and Kennison was waiting atop Jackson Hole’s infamous Corbet’s Couloir, stoking himself up to drop into the biggest run of his life. With the help of the High Fives Foundation, Kennison had put in years of work for this moment. He was strapped tightly onto his sit-ski, with two outriggers in his hands. Moments later, he dropped in, aired the 30-foot cornice, bounced, and landed a second time. While not the smoothest of landings, Kennison dug himself out with the biggest smile on his face. Below, the huge crowd that had gathered at the bottom of Corbet’s was cheering wildly for him as he skied down the rest of the run into the finish corral.

That day, Kennison made a huge leap – no pun intended – for the sport of adaptive skiing. Nobody had ever even attempted an air that big on a sit-ski, let alone skied away from it. He trusted his mental and physical preparation, as well as his gear.

Sit-skis have come a long way since their inception in the late 1960s. These days, employing technology derived from the worlds of Formula 1 racing, mountain biking, big mountain skiing, and medical prosthetics, these devices can allow their drivers to do the impossible – whether it’s hucking huge cliffs or simply making a rider’s day as they return to snow for the first time after a life-changing injury.

Back when sit-skis were first conceptualized, they were seen as a tool to simply get someone back on snow after a traumatic injury. Just like with any technology, time brings evolution. These days, adaptive ski technology has followed a path akin to other high-performance sports products – they are designed to give athletes a competitive edge in pushing the limits, whether on a racecourse or in big-mountain terrain. 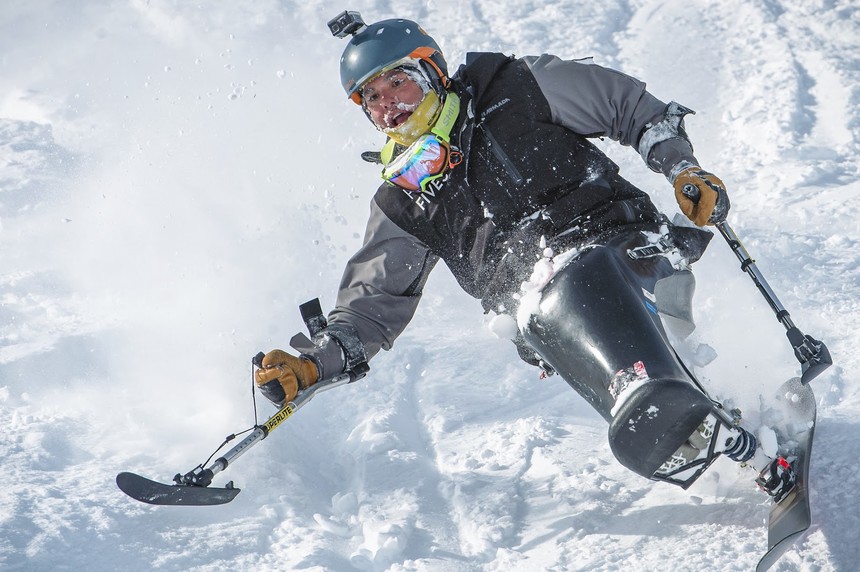 Kennison sliding into the finish corral in front of a roaring crowd. Nic Alegre photo.

Trevor Kennison rides a mono-ski from Pennsylvania-based brand DynAccess. It’s a model built to withstand impacts like dropping 30 feet from the lip of Corbet’s, or hitting features in the terrain park. Athletes need to be able to trust their gear blindly, so a huge amount of research and development goes into a product like this. Kennison’s ski was created by Joachim Grenestadt, a mechanical engineering professor and avid skier who spent years building high-performance suspension with Penske Racing Shocks. He focused his work on designing sit-skis after a student lost the use of his legs in a serious mountain bike accident. To Grenestadt, a sit-ski is less like a ski and more akin to a complicated mechanical device like a motorcycle that needs to perform to the highest standards.

Roy Tuscany, founder of the High Fives foundation, says that, “It wasn’t until a few years ago that adaptive brands realized they could market beyond the masses.” According to Tuscany, only a handful of athletes are operating at the level of Kennison, which allows brands to focus their high-end development and allows athletes unparalleled access to the best equipment.

Part of that new outlook has produced a crop of athletes that want to bring their sit-skis into big-mountain terrain. Many of us first saw a push in this direction in Salomon’s 2011 short film The Freedom Chair where Josh Dueck took his sit-ski down backcountry pillow lines in Chatter Creek, BC and became the first person to land a backflip on a sit-ski. More recently, we saw sit-skier Jay Rawe stomping huge 540s at Squaw’s terrain park. Tuscany says, “Technology is finally allowing folks to move beyond the racecourse,” and athletes like Kennison, Rawe and Dueck are clearly taking advantage of it.

For most able-bodied skiers, our experience with sit skiing is very surface-level. So, let’s dive a little bit deeper into the actual technology of a sit ski. Probably the only similarity in gear to able-bodied ski equipment is the actual ski itself. Kennison, now supported by Rossignol, dropped into Corbet’s on a stock Rossignol Black Ops 115 ski. However, between him and the ski was a high-tech machine (the DynAccess Hydra) that contained a custom-built shock, an aluminum suspension linkage, and a carbon-fiber seat that was molded to his lower body.

The seat of a sit-ski is commonly called the bucket, and it needs to be form-fitting like a ski boot. Fitting one to an athlete is a long process – it’s like making a ski boot fit but on the scale of the entire lower body. When it comes to customization of a sit-ski, Tuscany highlights three things. Seating is paramount, followed by the shock tune and linkage designs, which are often similar to what is found on mountain bikes or motorcycles.

Many sit-skis use mountain bike or motorcycle shocks, but Grenestadt uses custom-built Penske shocks in all his DynAccess skis. He asks, “Imagine perfectly tuning your mountain bike shock. It will ride great, until you take the pneumatic tires off your rims. What happens then?” The answer, of course, is that the shock would perform terribly because it is designed to work in conjunction with the squishy tires. The same effect occurs when you put a mountain bike shock on a sit-ski: it feels harsh and doesn’t work as intended. 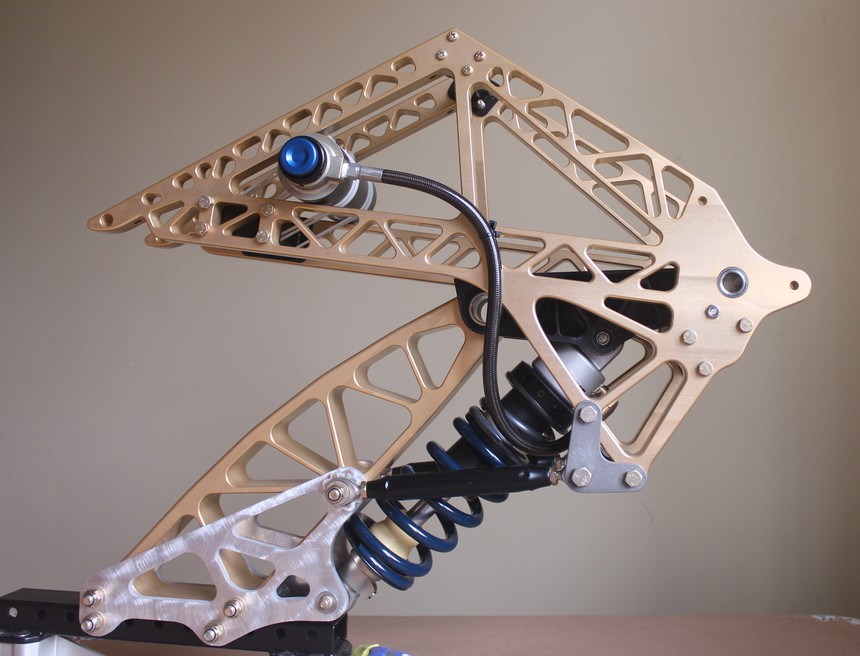 A look at the linkage design of a Hydra ski. DynAccess photo.

The shocks found on DynAccess skis are built not only to work in cold temperatures featuring low temperature seals, cold-weather fluids, but also include what Grenestadt refers to as “decoupled damping.” That means a small portion of the travel is undampened, acting like that squishy mountain bike tire in order to add more comfort and small-bump sensitivity.

With products like the Hydra, engineers have learned from past sit-skis to create the highest-performing options out there. Grenestadt specifically points out that on older models, the suspension would often work against the skier when turning. Whereas in models like the Hydra, the linkage design and kinematics allow the skier to hold a more balanced athletic position while ripping turns and hitting airs, essentially working with them to create turns.

Kennison rides a mono-ski, which allows him more freedom and maneuverability than a bi-ski setup. Whether an athlete rides a bi- or mono-ski setup largely depends on their disability. With higher-level injuries, like those involving upper body paralysis, a bi-ski can grant an athlete more stability and balance to get around without extra support.

Most sit-skis require relatively large amounts of bodily input from the rider, which of course is something most athletes want. However, re-achieving this mobility is often a long road, and at first some extra help is required to move around a mountain, especially when learning how to sit-ski.

The TetraSki, developed by the University of Utah Rehabilitation team, is a solution to this mobility problem. It is a sit-ski with electric actuators that a rider can control either by joystick or breath-control. The ski is tethered to an instructor, who can use a wireless remote to demonstrate proper technique. This technology — tested extensively through the University of Utah’s adaptive ski program (TRAILS)— has proven to be a safe and effective way to get sit-skiers on the mountain. It has replaced the traditional, tethered bi-ski approach in the TRAILS program for individuals with high spinal cord injury and for others with significant upper extremity impairments or asymmetry. TetraSki currently has three units out with various adaptive ski programs throughout the country.

With tech headed on a trajectory to make adaptive sports easier on all levels from beginner to pro, it is now up to organizations like High Fives and adaptive sports programs all across the world to continue their hard work. This past year, the High Fives Foundation supported 125 athletes and veterans across the country, and hopes to expand that number. In terms of evolving into the big-mountain world, programs and coaches are realizing the potential of athletes like Kennison, Rawe, and many more to push the limits of the sport, and are working to expand competitions beyond just racing to ensure true big-mountain competition are not outside the norm. Who knows what we'll see atop Corbet's next winter? Or better yet, atop any number of big-mountain competitions

A good blog always comes-up with new and exciting information and while reading I have felt that this blog really has all those quality that qualify a blog to be a one.
Professional Photo Editing Services
clipping Path services
Background Removal service
Photo Retouching services
Image masking service
Color Correction service
Jewelry Retouching retouching
Ecommerce Product editing services