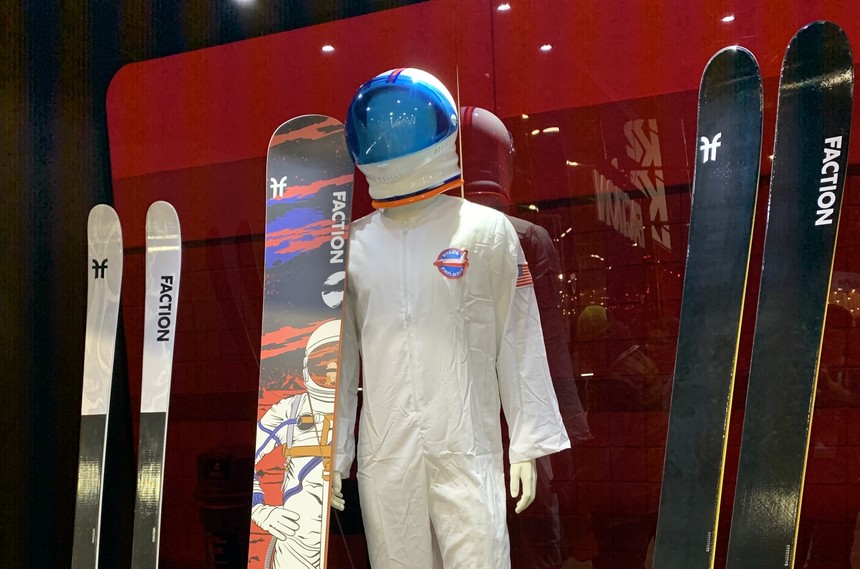 Outdoor Retailer 2020 bringing you news from the future of snowsports. Max Ritter photo.


January is always an exciting time in the snowsports industry. It’s January, so it’s snowing hard and we’re all able to enjoy some deep days wherever we may be. It’s also when the great minds of the industry get together for the annual Outdoor Retailer trade show and reveal what they’ve been working on for the past year. In a nutshell, it’s when we get to geek out on all the rad sh** you’ll be able to ride on next year.

This year’s OR show was an exciting one, with lots of brand-new product on display from some of the usual suspects. On top of that, we discovered some new players that we think are worth checking out. Take a peek at what we found at Outdoor Retailer Snow Show 2020, and stay tuned for more in-depth reviews on gear from TGR Tested this year. 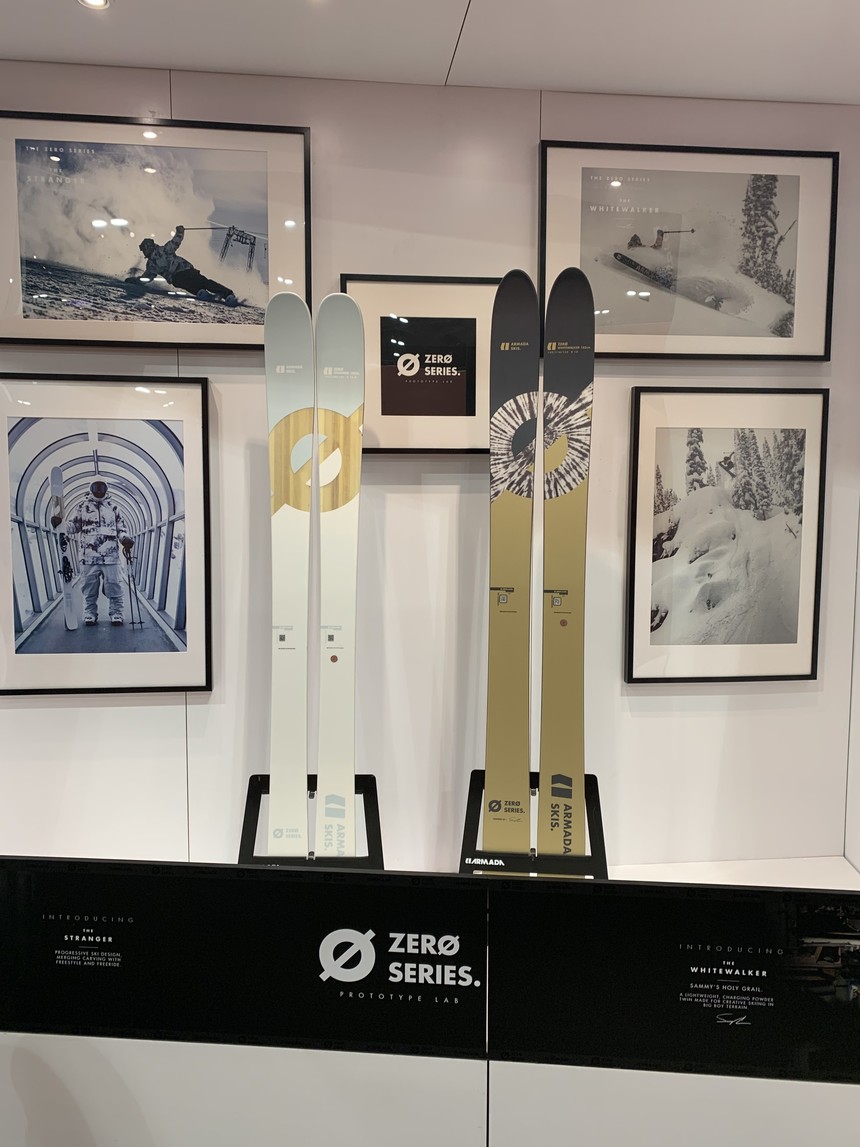 Armada debuted a brand-new freestyle powder ski, designed by none other than Sammy Carlson. Unsurprisingly, it looks a lot like the classic JJ we’ve seen Sammy ride for years, but we were told that it’s designed to be stiffer for bigger sends in the backcountry. 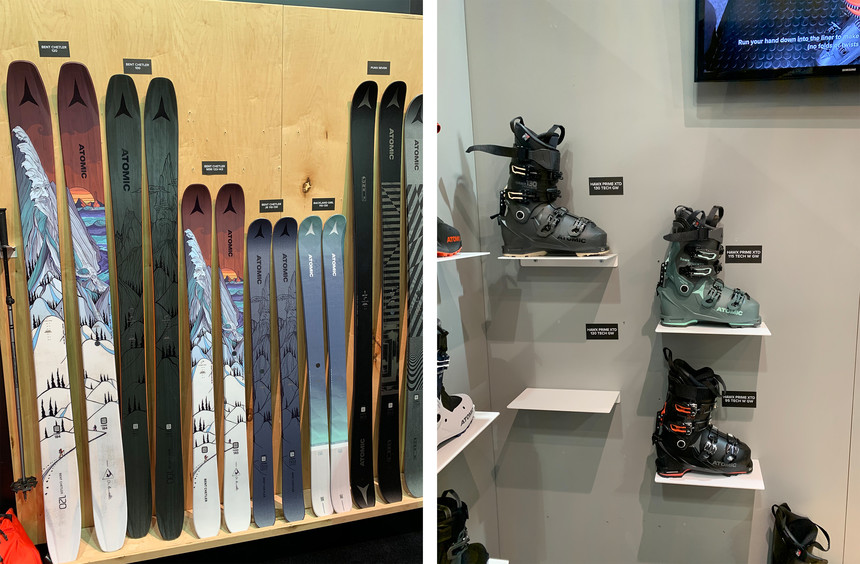 The Bentchetler 120 is unchanged, save for the super sick new top sheet. Looking at (and riding) these skis just never gets old. Atomic also created a wider, more comfortable version of their Hawx XTD freeride touring boots, called the Hawx Prime XTD. It comes in a 100mm last and features heat-moldable Memory Fit plastic. 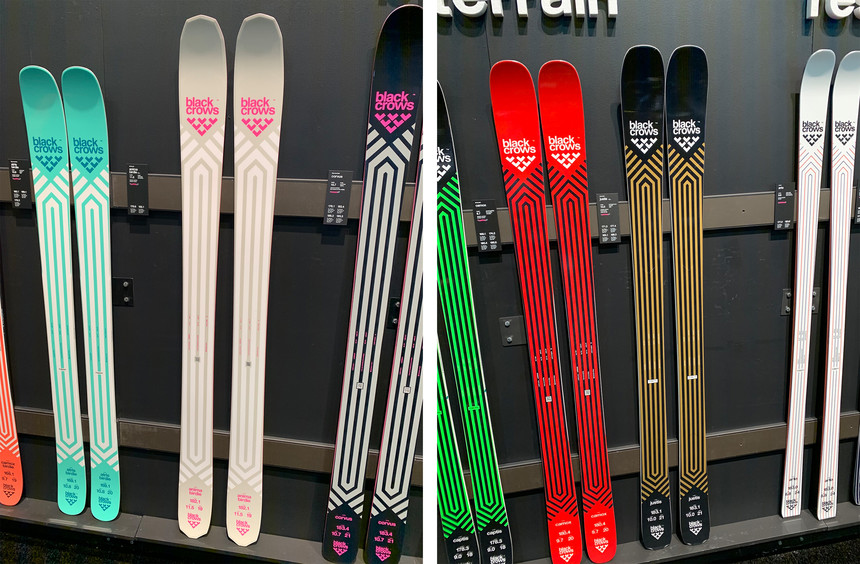 Most of Black Crows’s lineup is largely the same, with the addition of the Anima Birdie women’s pow ski (it’s the same as the men’s Birdie and comes in a wider range of sizes). Also, we saw a fresh all-mountain charger they call the Justis. 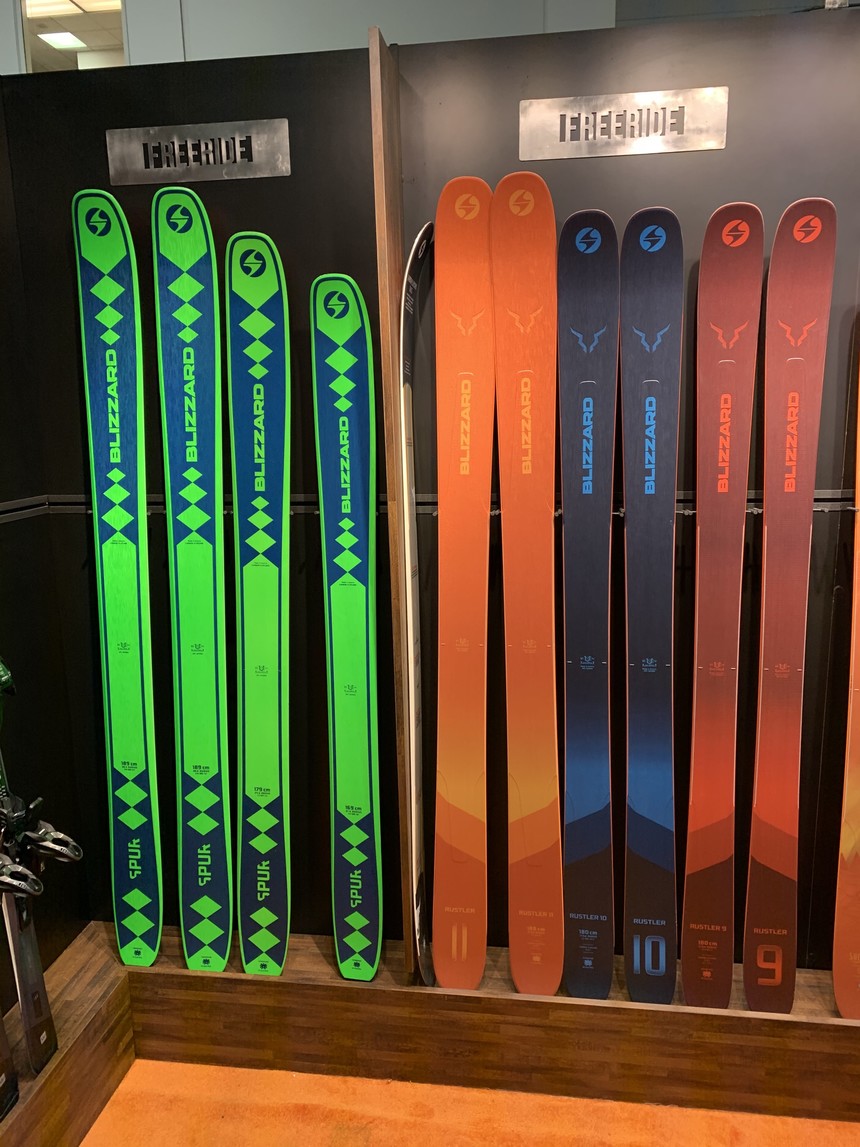 Blizzard’s ski line remains largely unchanged, except for an all-new Bonafide and Black Pearl all-mountain freeride rippers and a complete re-design of the Spur powder ski. The Bonafide (and the corresponding women’s Black Peark_ features new construction that should make it perfect for ripping top to bottom tram laps and full speed, no matter how chopped up the snow is. Blizzard wanted to make a ski that wouldn’t tire you out after skiing all day. Likewise, the Spur seems to have been tamed from a burly AK spine ripper to a more approachable deep powder ski. 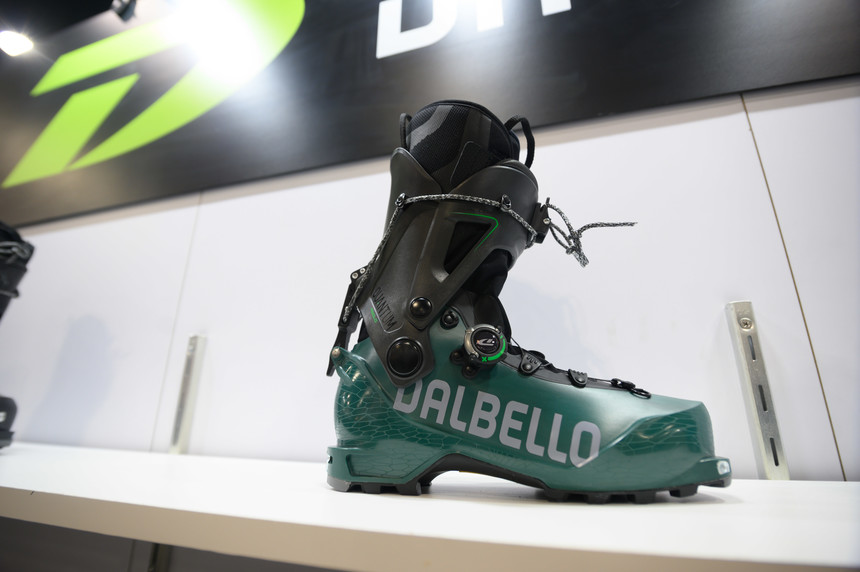 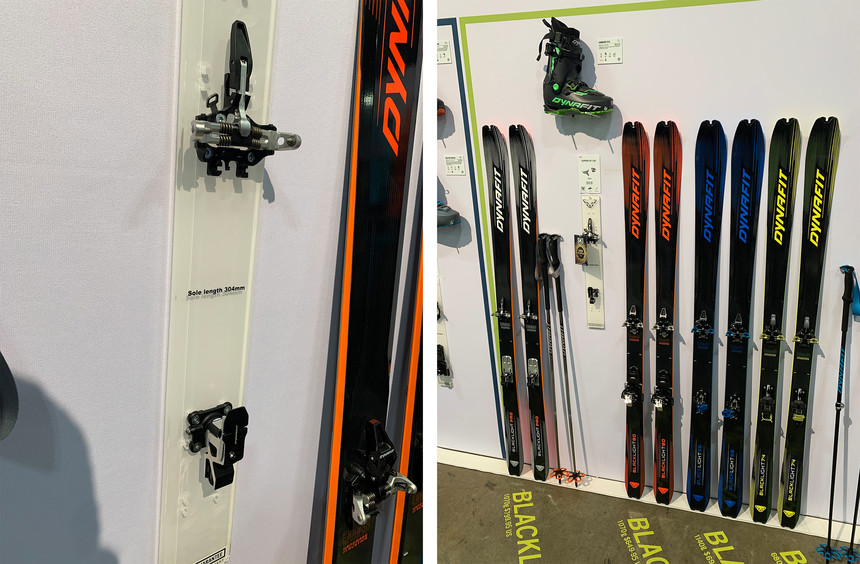 Dynafit has drastically slimmed down their line of skis this year. Still firmly rooted in the ultralight end of things, they showed the all-new line of Blacklight touring skis, which we got a chance to test on-slope and were blown away how well they perform. On the boot end of things, Dynafit has a more approachable version of the Hoji Free boot, now in a 110 flex. Finally, the Superlite 150 binding should usher in a new era of all-metal ultralight tech bindings. 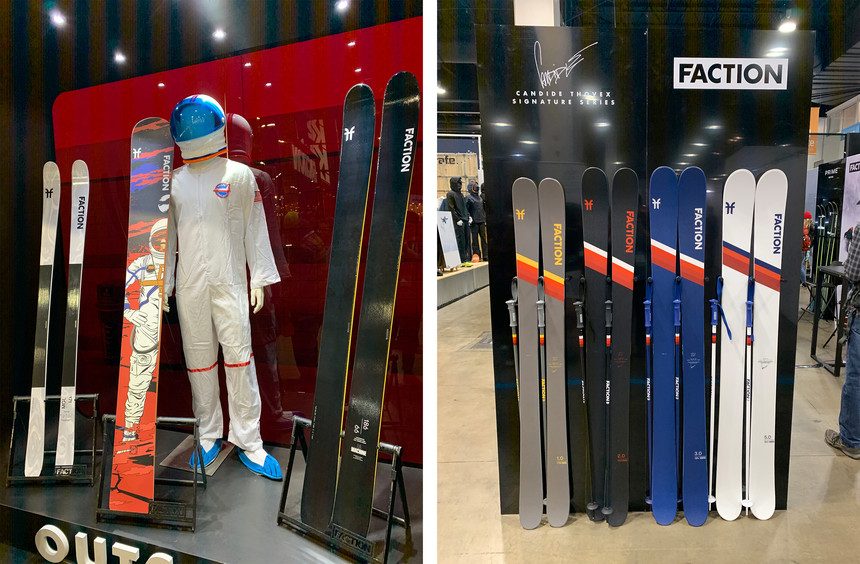 Faction is still doing the same old thing – making super fun skis that encourage playful riding all over the mountain. Candide Thovex is still going strong, and his line of Candide 1.0-5.0 skis was on display. We were told the 3.0 and 4.0 have a new construction to make them more durable and even poppier on the mountain. Faction was also displaying the La Machine, a dedicated deep pow charger designed by the team riders. 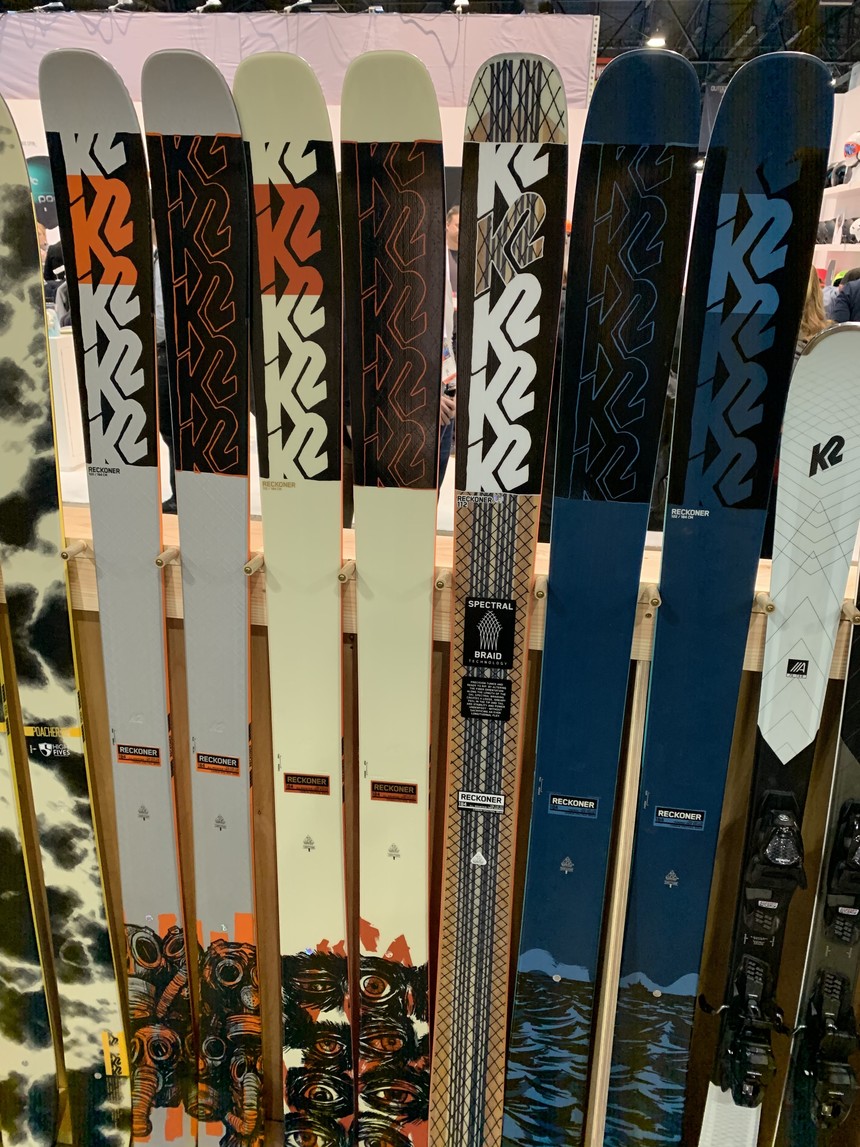 After the success of the Mindbender series last year, K2 is introducing the Reckoner series this year, which we’ve seen Karl Fostvedt skiing all season. They remind us a little of the Pettitor skis from a few generations back, with a twin rocker design for jibbing and slashing all over the mountain. The series consists of a 102mm, 112mm, and 122mm-waisted ski. 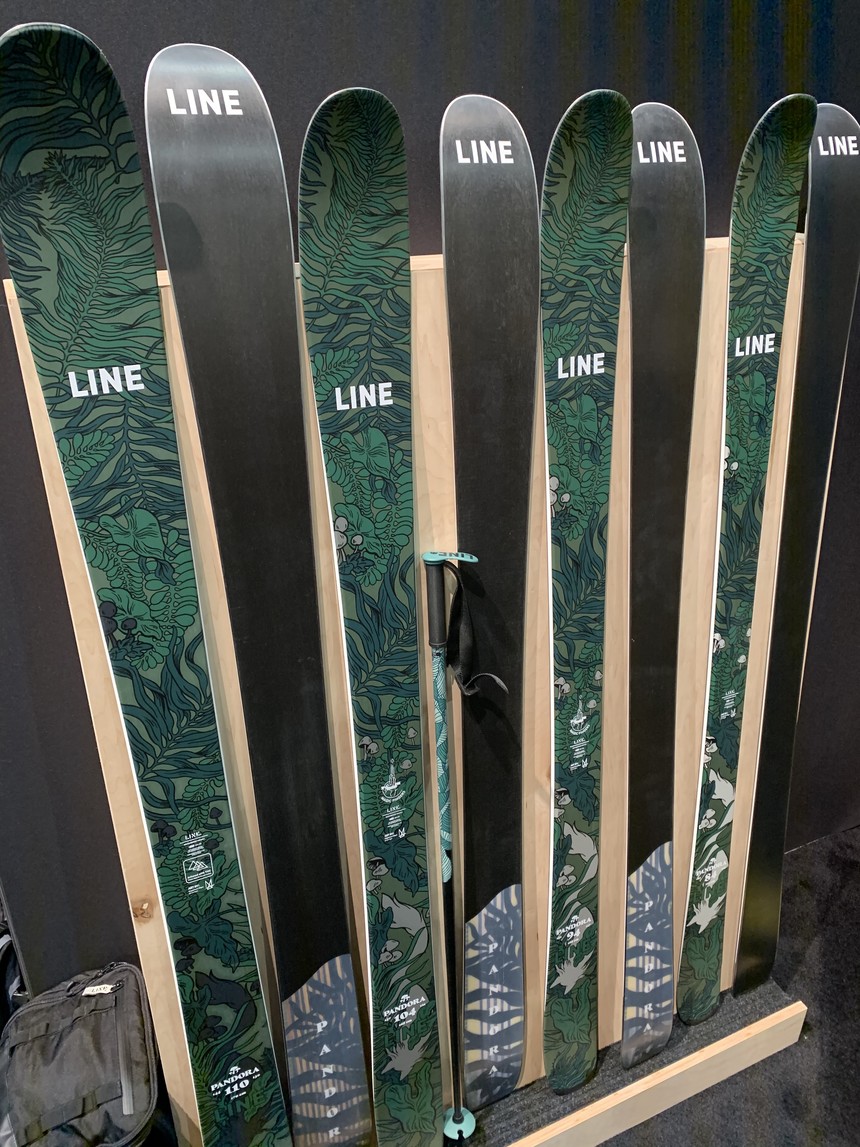 Line debuted a brand-new line of their Pandora women’s skis, with an 84, 94, 104, and 110 version. The 110 is the true highlight, taking the super-light THC constriction from their Vision line to create a hard-charging powder ski that could be at home both in the backcountry and ripping lift laps. We also saw the all-new Line Blade carving skis, that look ready to eat corduroy for breakfast, lunch, and dinner. 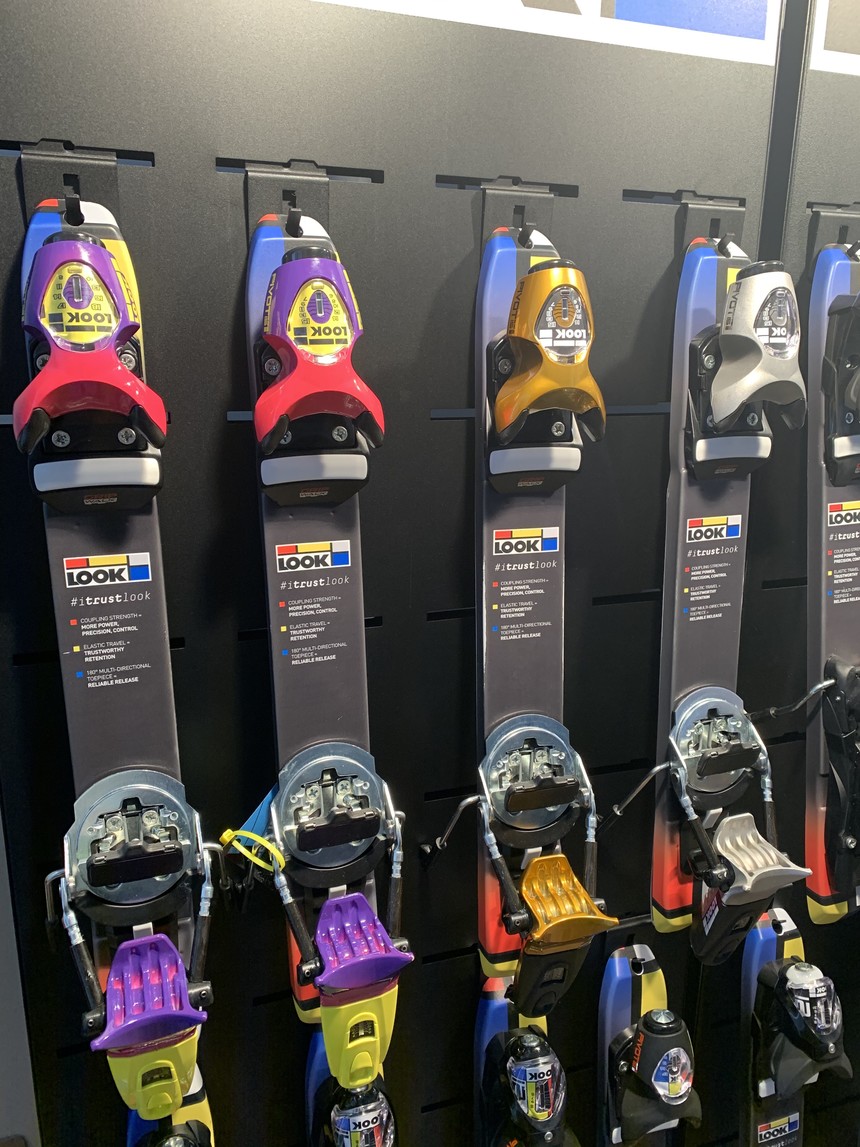 Look Bindings is re-introducing the Pivot 15, an all-metal freeride/freestyle binding that uses the same toepiece as the 18, with a DIN range and pricepoint that makes more sense for most skiers. It also comes in some sick colors. 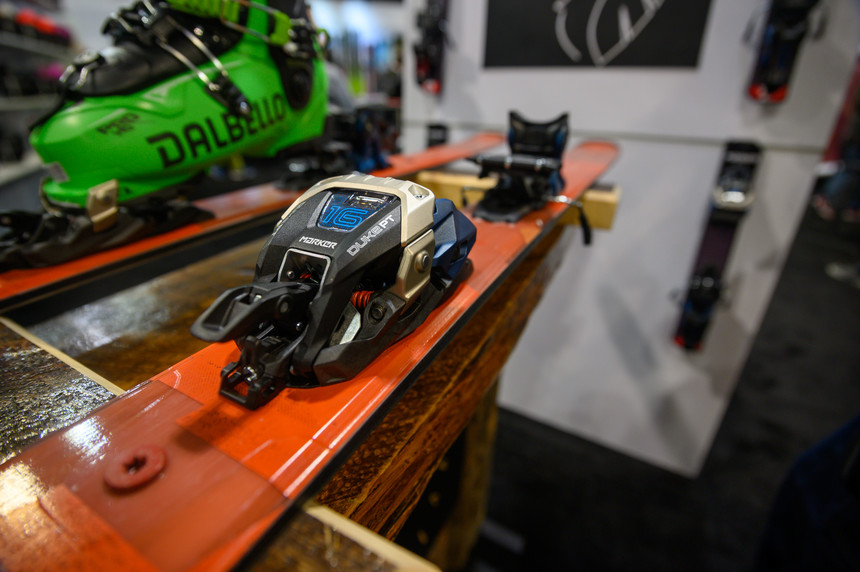 After a pretty stealthy marketing campaign, we finally got to check out Marker’s all-new Duke PT binding. In a nutshell, it’s Marker’s version of the Shift binding, and features a toe piece that transforms from a pin-tech touring mode into a full-on alpine-style clamp for ripping descents. In all honesty, it seems a bit complicated and slightly overkill for most skiers, but the fact that it can crank to a 16 DIN and provide unparalleled retention makes it a sure bet for the hardest-charging skiers on the mountain. 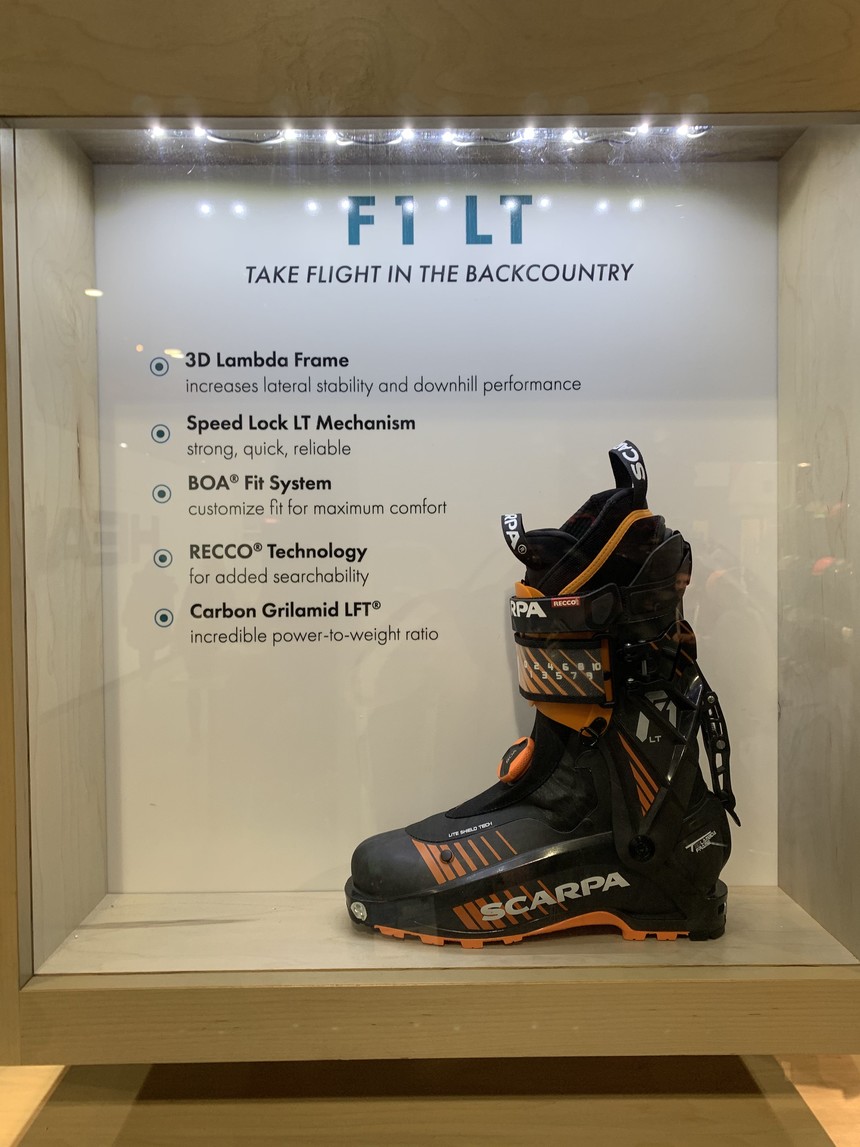 Scarpa has been on the forefront of ski touring boot design for years, always leading in the light and fast category. Last year, we saw the Alien RS, a beefed up skimo race boot that was capable of skiing just about anything. This year, Scarpa went the other way, and lightened up the classic F1 touring boot to create the ultimate light and fast boot for climbing and skiing huge lines in the mountains. 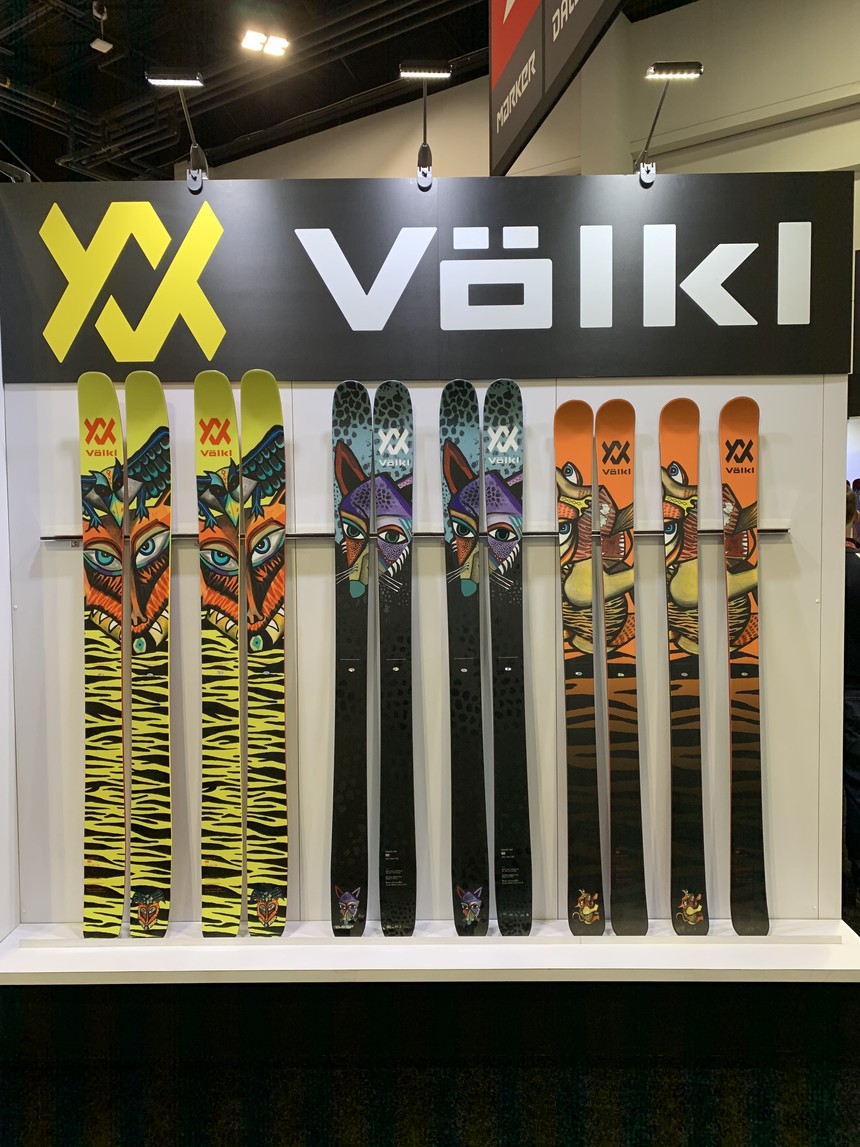 We already saw the introduction of Volkl’s Revolt 121 last year under the feet of Sam Smoothy and Colter Hinchliffe. The burly big-mountain charger now has a little sibling with a 104mm waist, perfect for inbounds domination. 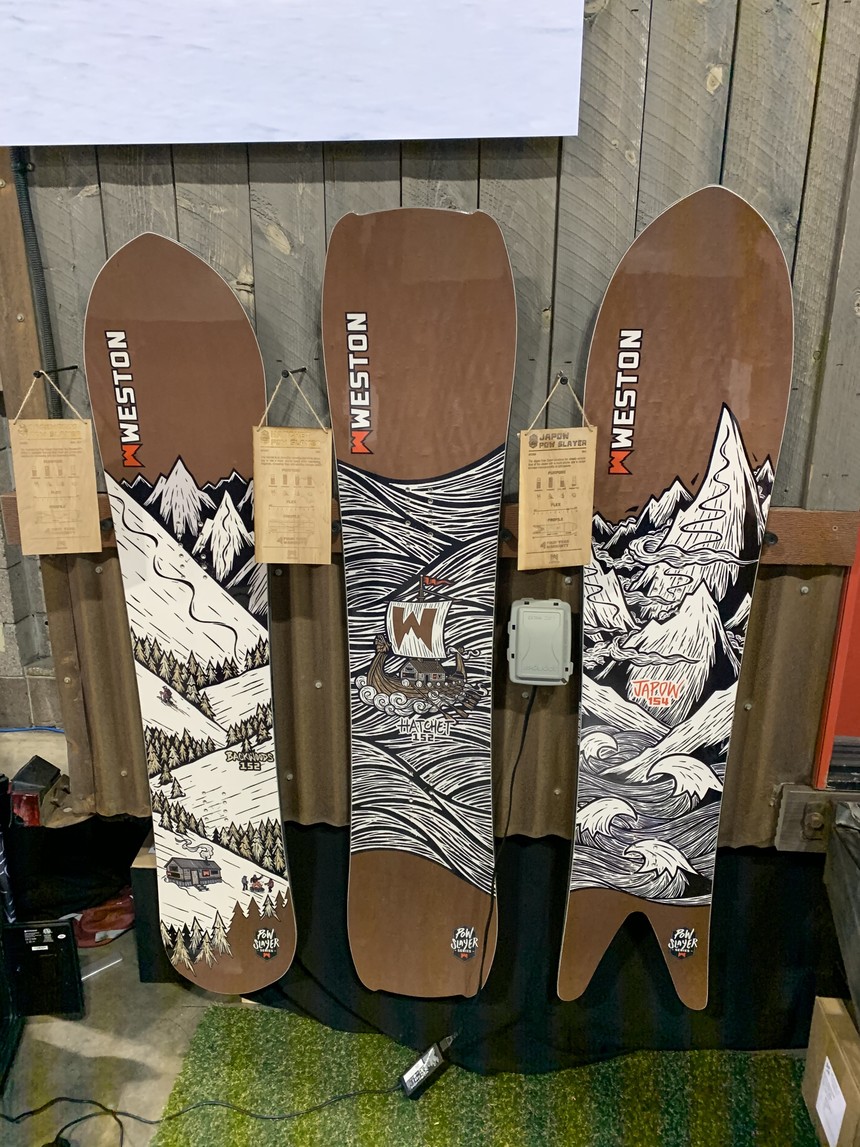 Weston snowboards debuted a brand new line of powder-specific shapes based on the Backwoods, Japow, and Hatchet boards. They are shorter and fatter, and should make those ultra-deep days even more enjoyable. 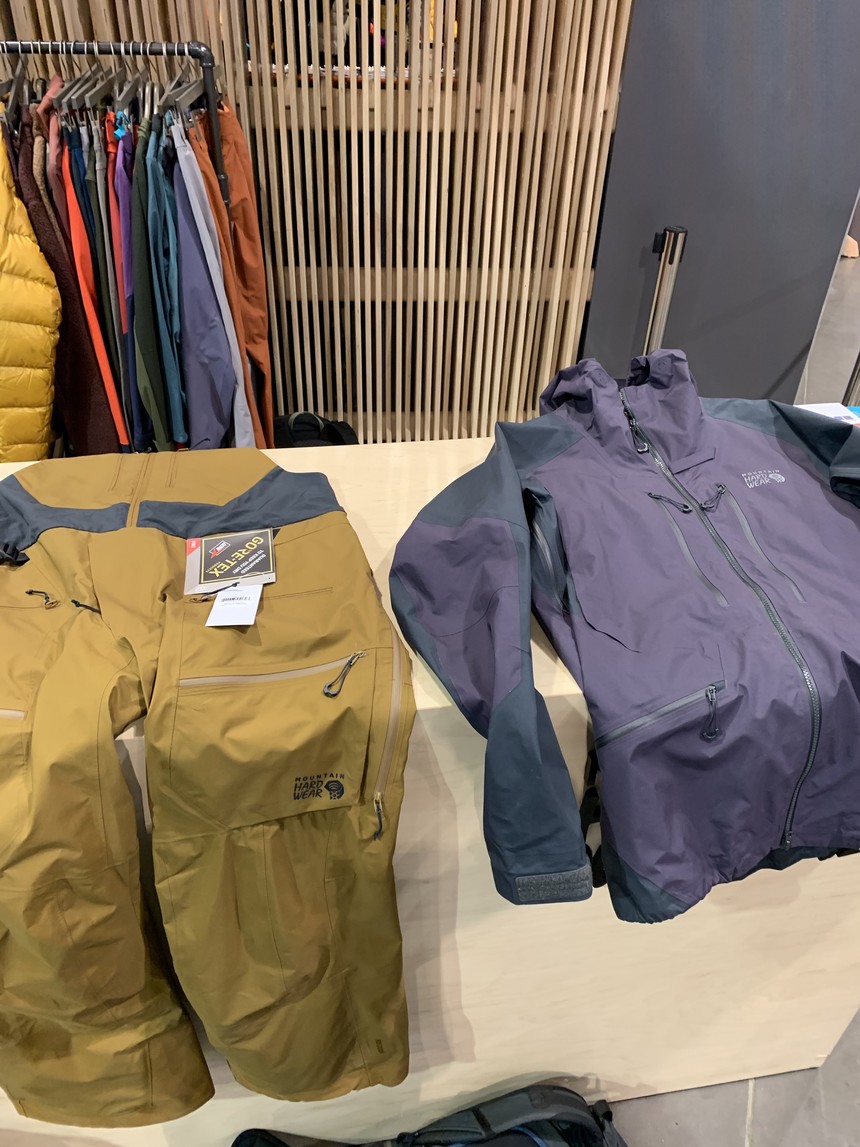 With so much Gore-Tex on the market, it’s hard to get excited about a ski kit, but Mountain Hardwear’s Viv Kit is one smartly designed freeride jacket/bib combo. Created in partnership with freeride ski mountaineering deity Vivian Bruchez, the ultra-light but ultra-durable shell is chock full of smart features for big days on the gnarliest lines in the world. It’s stretchy Gore-Tex at its finest. 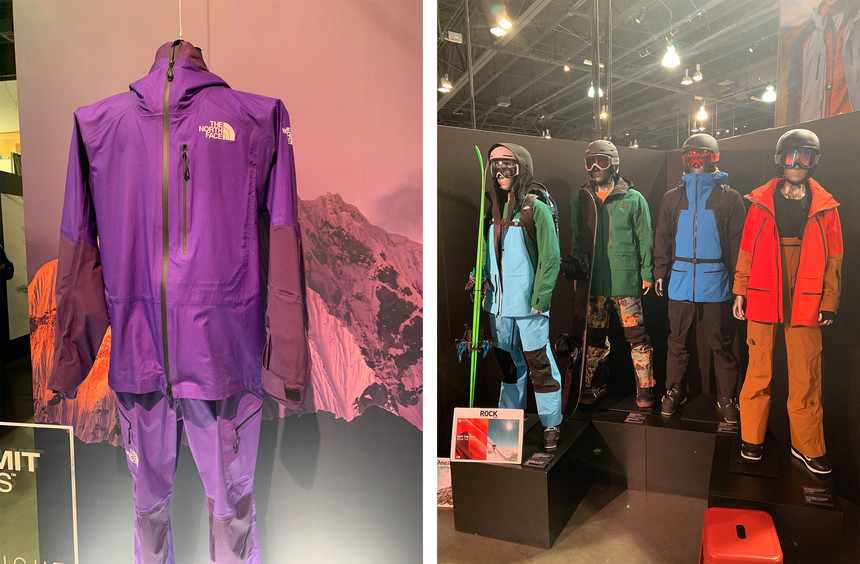 The North Face’s Futurelight isn’t exactly news anymore, but the brand is now integrating it into more and more gear. We saw a full lineup of freeride and ski mountaineering apparel, as well as an astonishingly light and packable winter mountaineering tent. 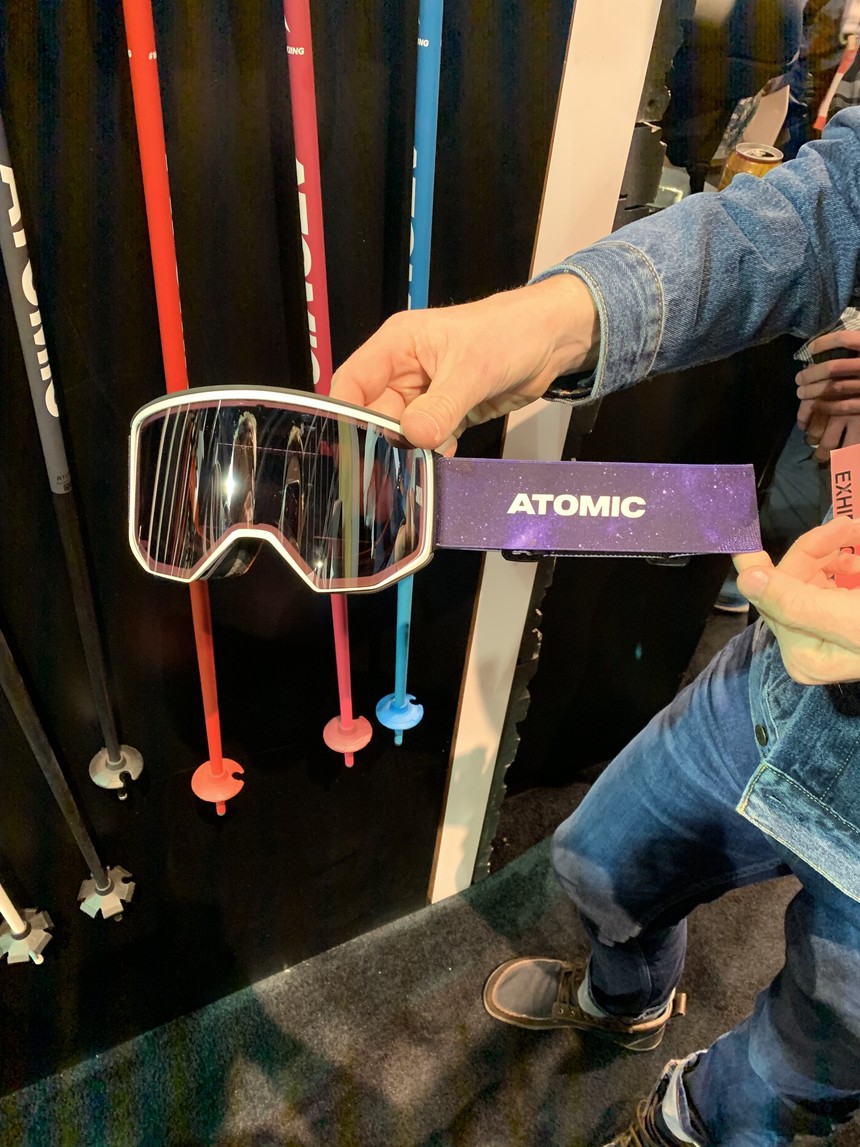 Also at the Atomic booth, we saw a fresh goggle designed by TGR athletes Nick McNutt and Tim Durtschi called the Four Q. It's a space-y design inspired by these athletes' astronomical sends. 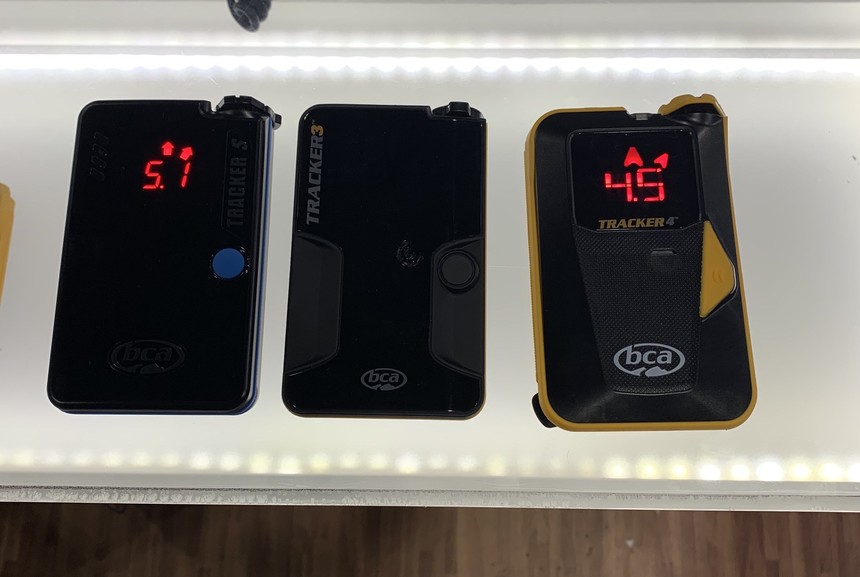 If you ski or ride in the backcountry, chances are you’ve heard of or own some gear from BCA. This year, the Colorado-based brand introduced their new Tracker 4 beacon, with similar features to the Tracker 3 but in a more rugged and user-friendly package. BCA also re-designed their Magic Carpet skins to be much thinner and more packable. 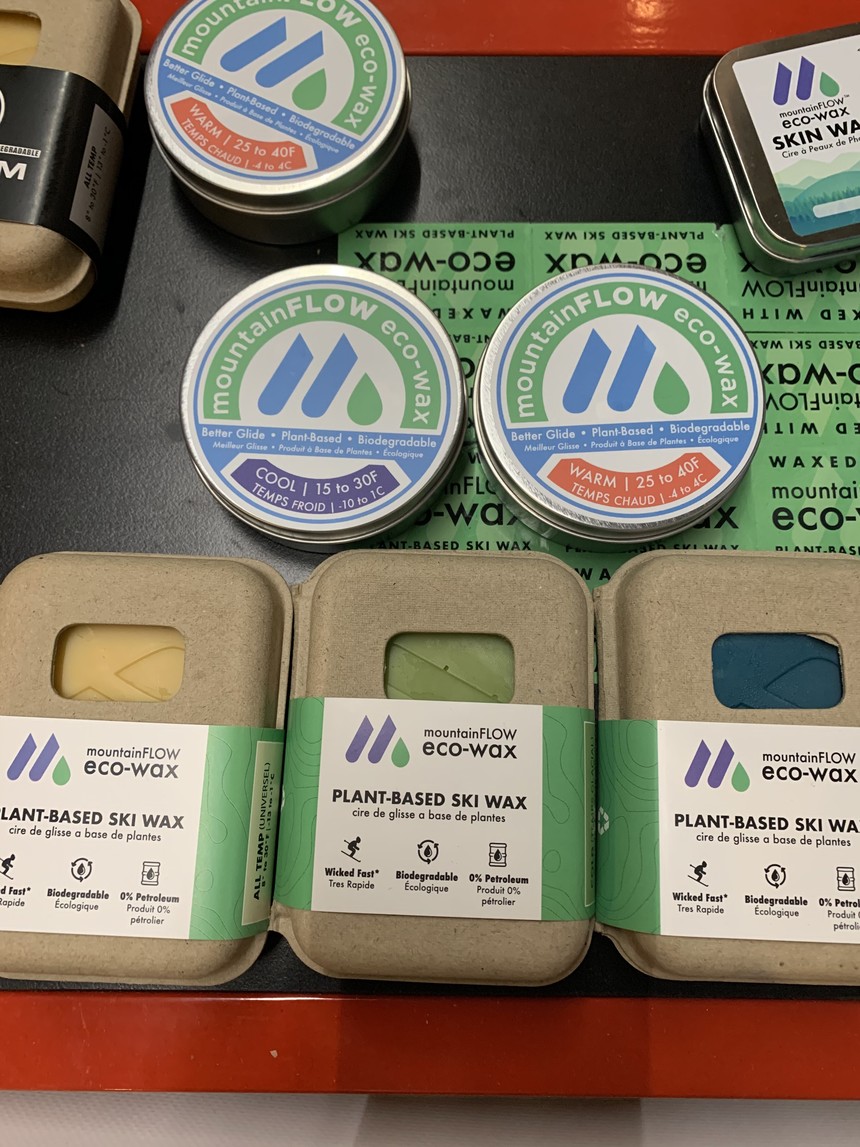 The real showstopper at the OR 2020 show was a tiny brand from Carbondale, CO called Mountain Flow Eco Wax who aim to turn the ski wax industry on its head. Simply put, traditional fluorocarbon wax is terrible for the environment, as it deposits harmful chemicals into the water supply every time a flouro-waxed ski base touches the snow. Mountain Flow makes ski wax with plant-based materials that are much more friendly to the environment. It’s a simple and incredibly effective solution to a problem we’ve ignored for far too long. 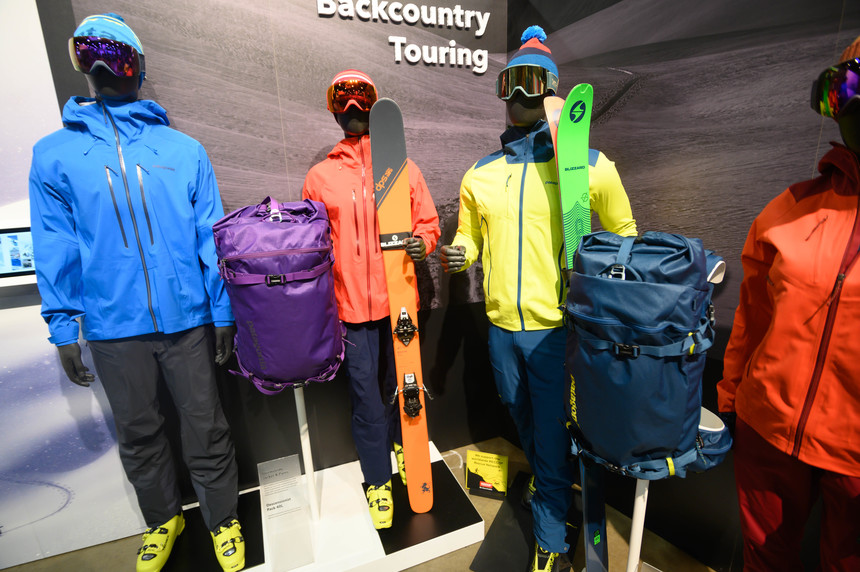 Patagonia re-designed their super-classic Descensionist backcountry skiing pack. It now comes in a 32L and 40L version, with a roll-top system and is constructed of more durable materials. 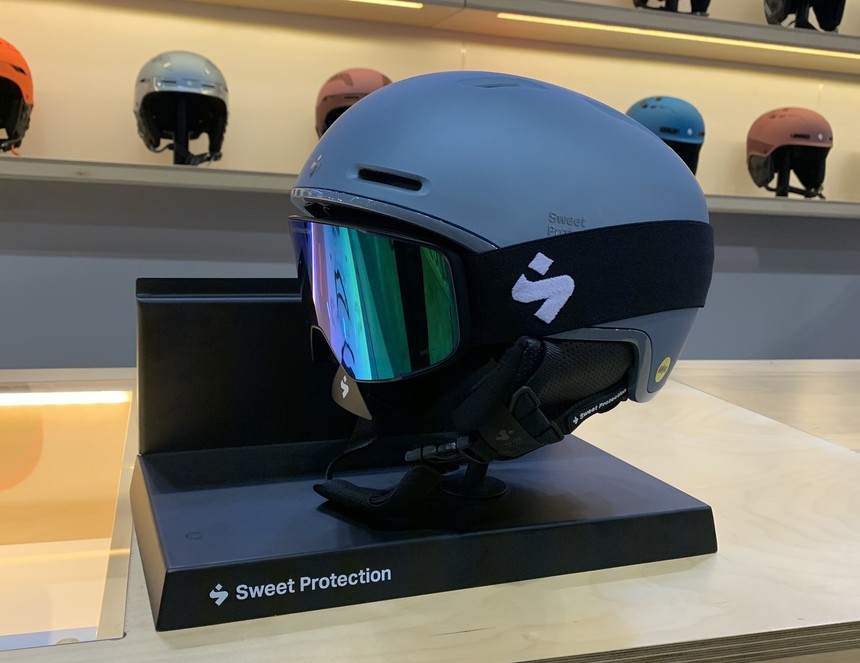 A relative newcomer to the North American helmet and protection market, Norway's Sweet Protection has a stylish new helmet that features all the safety bells and whistles we’ve come to expect like MIPS and multi-density foam to protect your noggin when you bail. It’s good to see a new contender in the market.

The future of snow sports looks good. Through the pics shared here we can understand that there will be many advancements in snow sports in the future. see this here I like this post. This is mainly dealing with the different types of snow skating boards.

Canfield's Lithium on its namesake trail. | Lily Krass photo. When someone asks me what my favorite home trail to ride is, the answer is easy. High atop Teton Pass, after a shuttle drop and a bit of pedaling, lies a 3.5-mile ribbon of singletrack that drops nearly 3,000 vertical feet back to the valley floor. This superhighway of steep loam, rock tech, and substantially-sized jumps is aptly named: Lithium. In reality, it’s a bit of a miracle drug for those of us who need a little