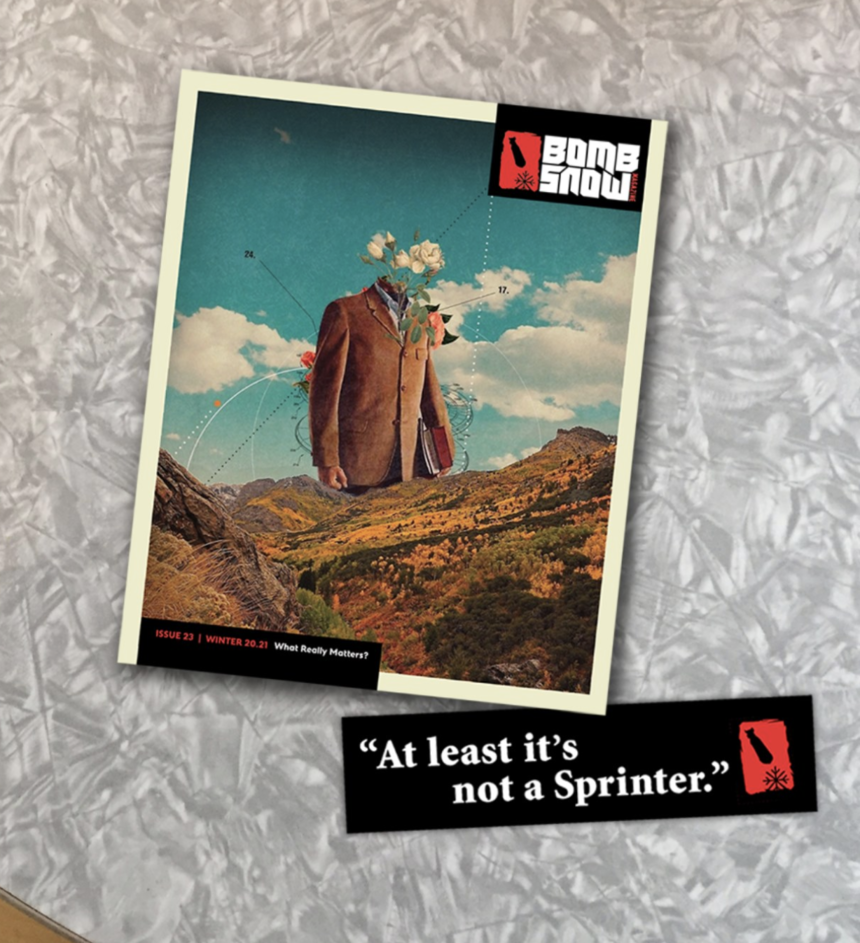 What’s the most visible part of action sports culture? Well, in short, it’s probably media. Whether it’s magazines, websites, movies, podcasts, or anything of the like, talking about and showcasing the cool things we do is - for better or for worse – one of the most important parts of the culture. Sadly, the slice of our media world that contains magazines and written word has slowly fallen off the table in recent years, with social media and other platforms taking over thanks to our collectively short attention spans and insatiable hunger for the next rad thing. However, a few hardy souls have toughed it out, with most recently Bomb Snow founder and chief motivator Todd Heath keeping the dream alive. Bomb Snow, and its sister publication Bomb Flow, were platforms for irreverent, yet meaningful content centered around skiing, snowboarding, and all things whitewater. With a little creativity, and a lot of motivation, Heath is bringing back Bomb Snow and Bomb Flow in their full glory: as a print magazine. We caught up with Heath to hear how it’s going, and learn a little more about what it takes to bring a favorite back from the dead.

TGR: What’s the deal with Bomb Snow? Can you give us a quick rundown of the mag’s history?

Todd Heath: Bomb Snow started as “Piste-Off” Magazine back in 2005 as my senior thesis project for my Graphic Design degree at Montana State. We printed a two-color version at the local newspaper in town. I believe it was only 32 pages and had three pages of ads. That was the beginning of a hobby/side project that lasted 11 years. I say hobby because Piste-Off and eventually Bomb Snow were never my full-time job/s. I was either working at restaurants or as a graphic designer/freelancer while also creating Bomb Snow on the side. It was and always has been a creative outlet and a collaborative effort. When we first started, I had enough close friends (now life-long friends) from the graphic design program who would help with the design efforts. We would geek out for a couple weeks of sleepless nights and finish a magazine. I would hang flyers all over campus asking for contributors and go door to door with businesses here in Bozeman asking for a couple hundred bucks to sponsor our idea. Some of these contributors we are still working with 16 years later. Piste-Off was punk and as DIY as it gets. I felt the need for a ski/snow magazine that focused just as much on art, music and creative writing as it did on pretty pictures of people sliding down snow. And our love for free speech needed an outlet, so we made our own magazine. Really, we were just making what we thought was cool at the time and having fun. And as Jake Moe, co-founder of Powder Mag told us - “If you’re not having fun, you’re fired.” We printed five or so Piste-Off editions - each issue becoming larger and more colorful. Issue 1 was 32 pages, black and white, and by Issue 4 we were printing 60 full color pages and were able to pay for the magazine through local advertisements…On Issue 6, we changed the name to Bomb Snow because we were nervous about legal issues with the local rag out of Utah called Off-Piste. We changed the name to Bomb Snow which came from the slogan- Bomb the Snowpack, Not Iraq.

We eventually got into Barnes and Noble I think in 2008, Bomb Snow and then eventually Bomb Flow in 2011. We just printed Issue 24 this month and are really excited to show off Bomb Snow 2.0 to the people!

TGR: In a world obsessed with digital media, how do you stay relevant?

TH: We stay relevant with honesty, humor, great design and even better contributors. We print meaningful content. Print is coming back because the digital realm offers too much of the same bullshit. How many ski media sites and news sites in general do you see regurgitating the same content for clicks? It’s malarkey. Print doesn’t have time for click-bait. And half of these sites are owned by corporate kooks who only care about the bottom line…insert Powder magazine and plenty of other’s here, both digital and former printed content. Don’t get me wrong, Powder has always had great content because of their contributors, but they were bought out, and look what happened. It’s a shame but there’s plenty of opportunity for the small guys like Bomb Snow, Mountain Gazette, Adventure Journal, Ski and Snowboard Journal, Freehub Mag, and the likes. 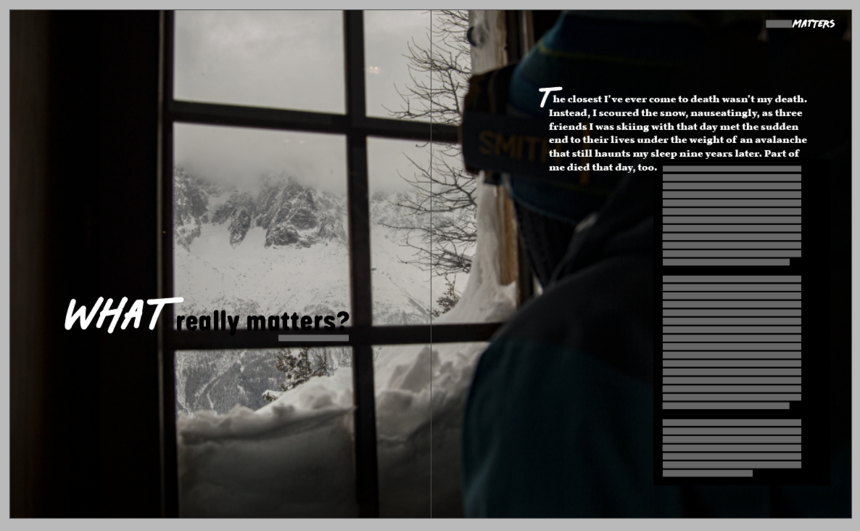 Bomb Snow stays relevant because we offer high quality, well designed articles that are relevant (Thanks contributors, you guys are awesome). They are relevant because they offer real life stories of people living and playing in the mountains. Mountain culture may be a trendy term these days, but it’s the lives we are living and the lives of our readership that we represent. Real stories about living out our dreams in the mountains...and knowing that being outside doing what we love is more important than wealth.

TGR: What are the kinds of stories you think are important to tell, and how do you approach them?

TH: I have always been interested in covering news about environmental issues affecting our region. It’s been a running joke of mine that Bomb Snow has always hidden relevant stories behind pretty ski photos. It’s obviously important to talk about the destruction of the places we love without getting too political or opinionated. Letting our readers decide where they stand without too much hyperbole is hard to do. 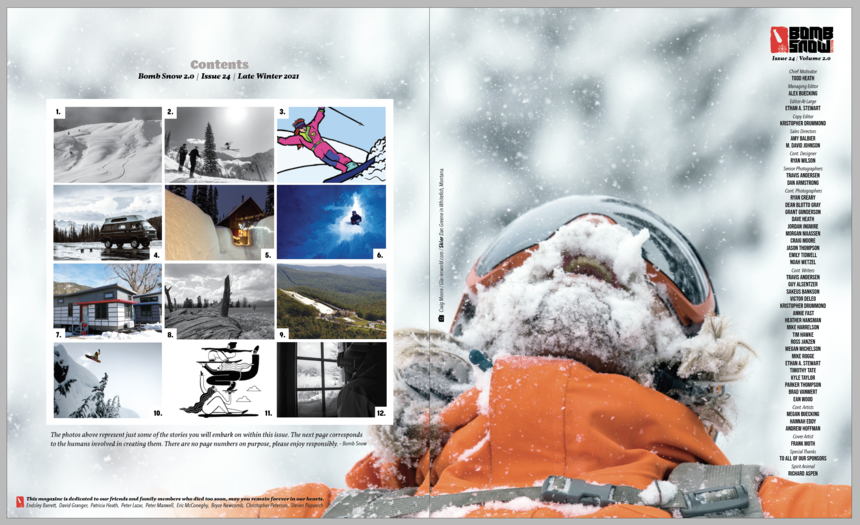 I’ve always loved a good interview with entrepreneurs or artists and icons in the industry. Asking questions outside of people’s comfort zones is always fun. Having interviewed Scot Schmidt, Greg Stump, Jeremy Jones, Jamie Pierre (RIP), Mike Parillo and others has been a real joy as someone who grew up idolizing these guys. I look forward to interviewing and branching out even more as we continue.

I appreciate a journalistic approach with call’s to action involved. What’s the point of making a magazine if you can’t inspire people to do good?

TGR: What’s your favorite aspect of snowsports media? What about other mountain/adventure sports?

TH: My favorite thing about snowsports and other outdoor media is that I have best friends who are making bad ass content in this space who continually inspire me to do better. Both Freehub Magazine and now Mountain Gazette are run by lifelong homies of mine and I wouldn’t have started Bomb Snow up again without their efforts in this space.

I love that all of the people in this industry are a tight unit. Having contributors from the Ski and Snowboard Journal, Freehub, Powder, Backcountry, Surfer’s Journal, Transworld and others coming together to help Bomb Snow 2.0 become a reality is pretty fucking rad and I think the more we can give shout-outs to each other and help one another along the way, the better print media will become. There’s room for all of us to make cool stuff. Thank you all, we couldn’t have done it without your support and dedication to this lifestyle!

TGR: Beyond just media, what’s your favorite aspect of the culture around our lifestyle?

TH: The shared experiences we have while enjoying the outdoors. When you grow up in the mountains or move to the mountains at a young age, you do it because you are passionate about skiing or riding. School and jobs typically come second. There are so many creative people following their passions living “Out West.” It takes a certain driven individual to decide to pack their bags and head for the hills. It’s a lifestyle for sure, and the intensity and excitement for it run deep. Pow days are obviously still the best thing ever. TGR: You mentioned some challenges you’ve faced with the mag in recent years, how have you overcome them?

TH: Well- we almost sold the magazine last fall. We were offered what we thought was a fair price but at the end of several months of back and forth, we just weren’t able to come to a solid agreement and no money was ever transferred. At the time it was a huge bummer for everyone involved and unfortunately, I believe some bridges were burnt. I wish things could have ended smoother and I learned a ton about myself in the process. I’m just glad I listened to my gut at the time.

Looking back now, I am so glad we held onto our baby because I can’t imagine what I’d be doing right now had we sold the mag. After losing two jobs because of Covid, Bomb Snow saved me. Trust the Universe baby and things will continually fall into place with the right attitude!

TGR: What’s next for Bomb Snow?

TH: Well - we are excited to be back and this is my full-time now, so it has to work! So yeah - We just printed the Late-Winter edition of Bomb Snow, so make sure to order one now if you haven’t already, and we will be bringing back Bomb Flow this summer and then another issue of Bomb Snow again in the fall. I can honestly say that we are the only quarterly magazine printed three times per year thanks to being at least two to three weeks late every time we send it to the printer.

Let’s do this! Go to bombsnow.com/store to order the latest edition today and support independent mountain town media. Much love to our snow-sliding community! We will continue to make rad content as long as you continue to support the cause by buying our (your) magazine.

Great merchandise and shots as always! I’d love to get my hands on one if I have the opportunity. Really a fan of this. Thanks for sharing this news. Tree Service Sandy Springs

TGR's own Meg Matheson and Caite Zeliff in full regalia. | Taylor Fry photo. Now that the collective dust has settled, the hangovers have fully kicked in, and we've finally changed out of all yesterday's denim, it's time to look back on Gaper Day 2021 at Jackson Hole Mountain Resort. Oh man, was it one for the ages - blue skies, warm temps, perfect corn snow, and the chance for the community to show off what they do best: partying hard, skiing harder, and spreading the stoke left and