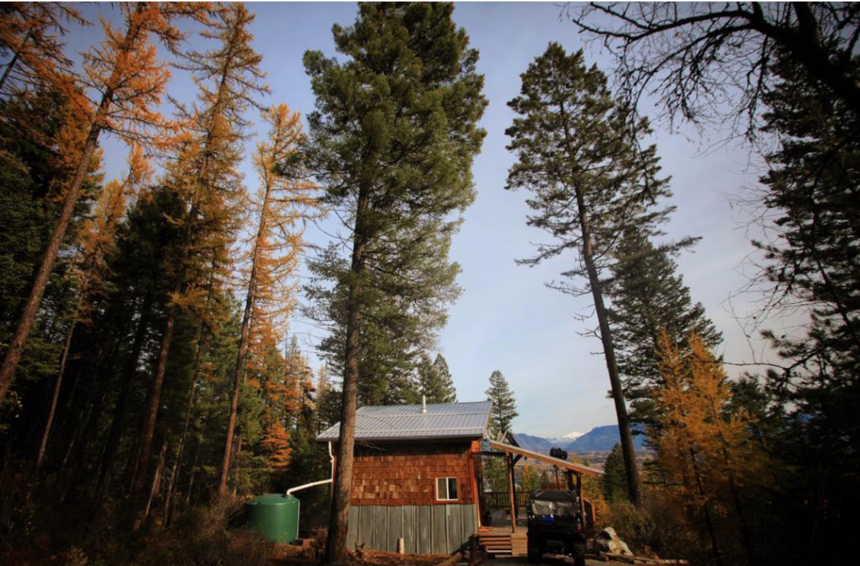 This newly built tiny house is completely off the grid in Montana.  Busby photo.

Mollie and Sean Busby live on the northern edge of the Flathead Valley in Northwest Montana. The stunning peaks and amphitheater basins of Glacier National Park lie to the northeast, and some of Montana’s best inbounds riding is just up the road at Whitefish Mountain Resort.

Sean is a professional snowboarder living with type 1 diabetes, an autoimmune disease where the pancreas is basically broken. He also has Lupus, an unpredictable autoimmune disease that can damage any part of the body at any time. Mollie runs an international nonprofit called Riding On Insulin, and the pair own two local yoga studios called Yoga Hive.

And on top of it all they live off the grid… in a tiny house. 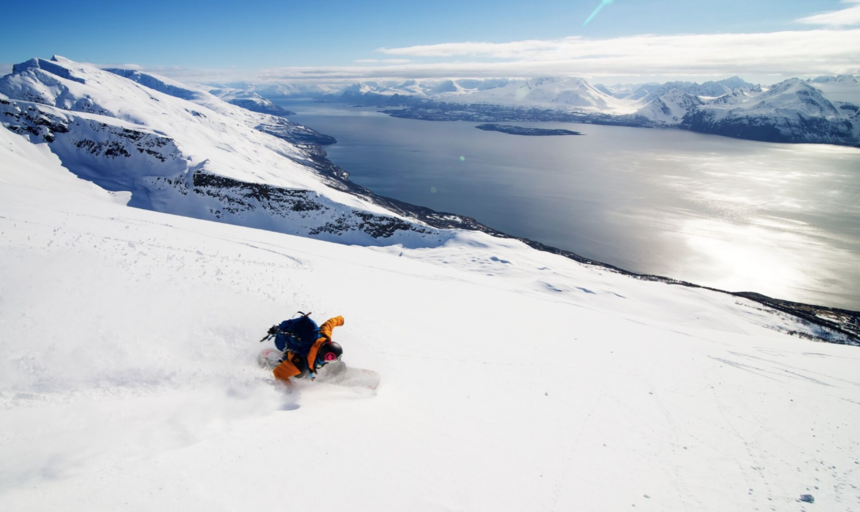 Three years ago, the Busbys pitched a yurt on the side of a mountain in the woods. They’ve lived there ever since. Last summer, they added a sizable garden, chickens, and ducks, and a 420 square foot tiny home — a mountain homestead they call “The Busby Hive” (get it?).

Living off the grid means Mollie and Sean are responsible for their own power, water, and sewage. They haven’t had a utility bill in almost three years. 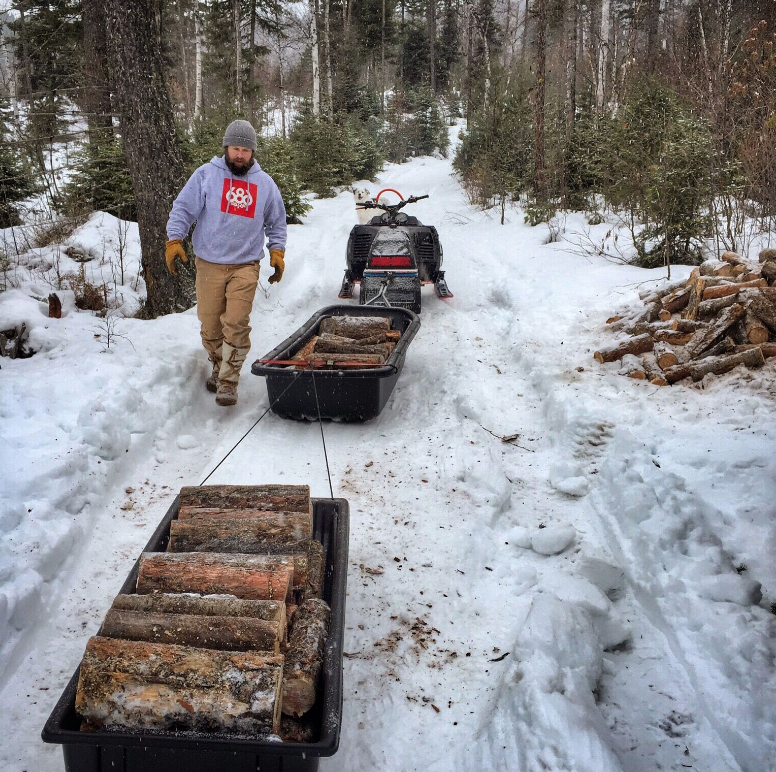 Sean shuttling firewood up to the yurt and tiny house. Mollie Busby photo.

To get to their home in the winter, they have to snowmobile or ski tour up a steep, dirt road. They haul up water to drink, or use rainwater and snowmelt. They heat the place with wood from the downed trees on the property. (They also built the tiny house with those trees.) They use solar for all of their power, and they have to follow a series of complicated and important instructions to use the composting toilet—because messing that up really sucks.

After hearing their story, I was inspired to take little pieces of the self-sustaining life they’ve built and apply it to my own.

Maybe it will inspire you, too. 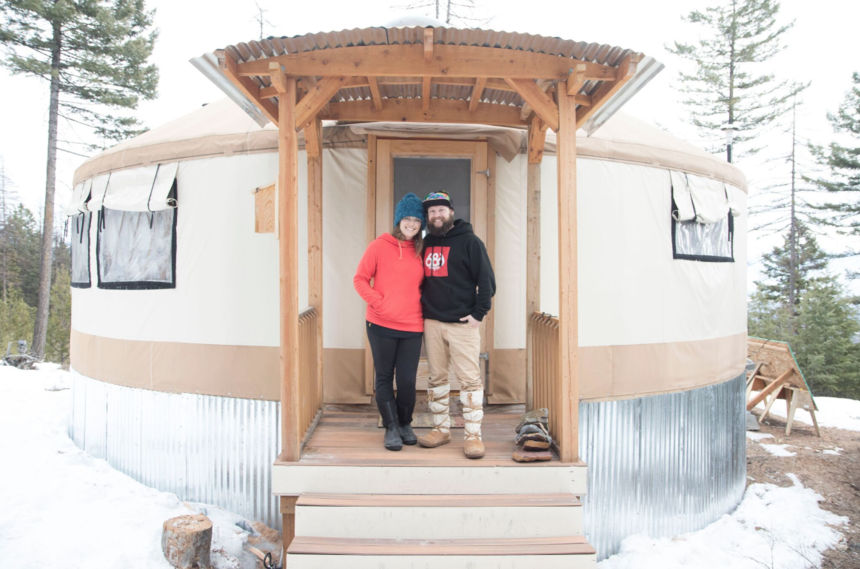 In 2004, Sean began developing ski/snowboarding camps for kids with type 1 (or T1D). Kids could come to the camp and learn how to snowboard while still managing life as a T1D. He called the program “Riding On Insulin.” And because of the program, six years later, he met Mollie.

Sean was hosting a Riding On Insulin camp in Wisconsin and had been mentoring a kid named Jesse who also lived with T1D. “Jesse loved skating and snowboarding and was a lot like me,” Sean says. “He was like my little brother.”

Jesse died from T1D at 13 years old and Sean was asked to give his eulogy. “Mollie was there because she had worked with Jesse’s mom,” Sean says. “Life’s crazy because later when Mollie and I got married the only date we could do it ended up being on Jesse’s birthday. And now, Jesse’s mom works for Mollie.”

In June of 2010, Mollie moved out West to Utah to be with Sean, where he lived since finishing up his bachelor’s degree.

"If you can build a house together, you can make it through anything," says Mollie.

That same year, she incorporated Riding On Insulin as a 501c3 nonprofit and stepped into the role of executive director. She grew the organization into a qualified nonprofit that serves over 500 kids internationally. She says it is the hardest, most rewarding thing she has ever done.

In 2011, Sean and Mollie got married and two years later they made the move to Montana. “Moving up to Montana was all about getting out of the crowded backcountry scene,” Sean says, “and getting into an area where we have access to the Canadian Rockies.” And just over a year later, they decided to switch up the daily grind.

They bought some property on foreclosure and built a yurt.

A few years ago, Sean and Mollie went on an expedition to the Yukon. They stayed in a 10x10 cabin with zero amenities. No running water, no propane stove, and of course, no service. “It was so enjoyable,” Sean says. “I would just lay in my bed and look out the window at the Northern Lights every night. We had so much time to reflect.” 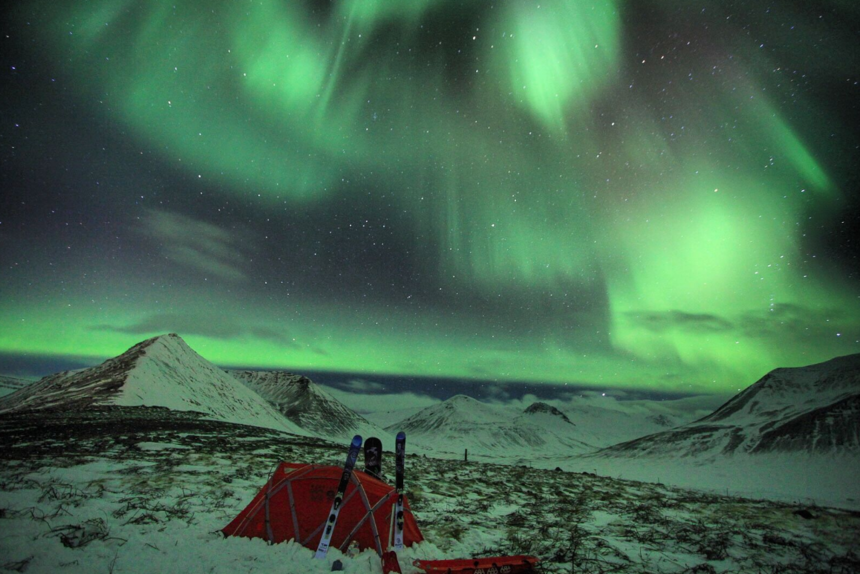 Enjoying the Northern Lights on a snowcamping expedition in Iceland. Busby photo.

Later that year, Sean and Mollie went to a Ted Talk given by Joshua Fields Millburn and Ryan Nicodemus, who are more widely known as “The Minimalists.” Millburn and Nicodemus talked about how they had six-figure incomes but still weren’t happy. They had too much stuff. So they put everything they didn’t use in boxes and got rid of it. “We went home that night and tore our closets apart,” Mollie says.

See a video of the yurt here.

In 2013, they bought the property, and the following summer, built a yurt—and have lived in it ever since. 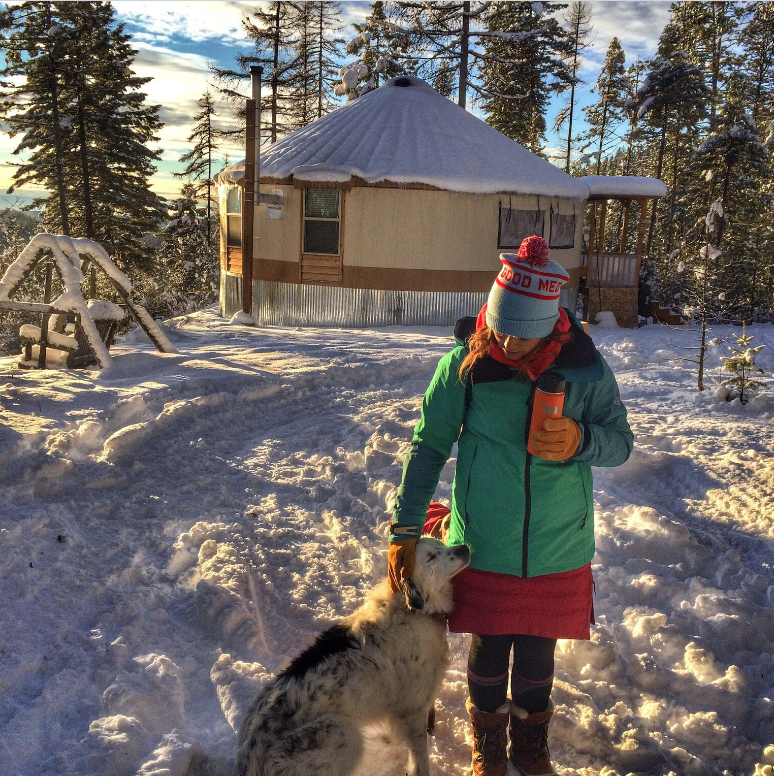 Mollie enjoying a hot cup of joe on the property with their pup, Glacier. Sean Busby photo.

“I feel like living in a yurt saved me,” Mollie says. “Back when we lived in the house, we’d come home, make dinner, watch a movie and go to bed. But when you come home to a yurt there is work to be done. And it’s healing. I can be outside and listen to the owls and be connected to nature. There’s a real rhythm to it.”

That’s why when Sean was diagnosed with Lupus last year, they didn’t abandon the yurt. They built a tiny house. 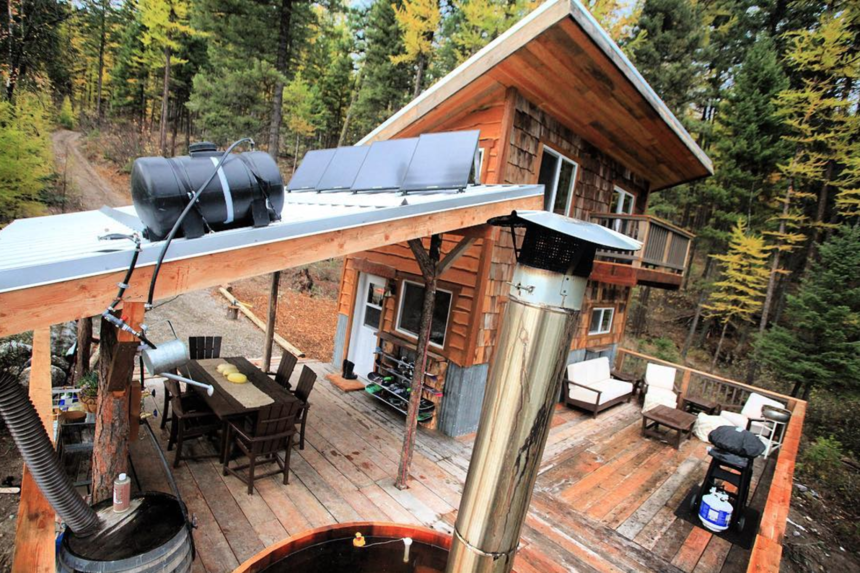 “After living with Lupus for a while, I realized being in a yurt is so much hard work especially off the grid. We appreciate and love the work, but on days where I feel sick and can’t move, Mollie has to do everything while also running businesses. There are just a lot of systems that can fail,” Sean says.

The tiny house is about a third of the size of the yurt, and they can heat the thing up with one log. The pair learned from building the yurt how to make the tiny house systems more efficient, and added a wood-fired hot tub on the deck so Sean can use it for recovery when Lupus attacks his muscles and joints. 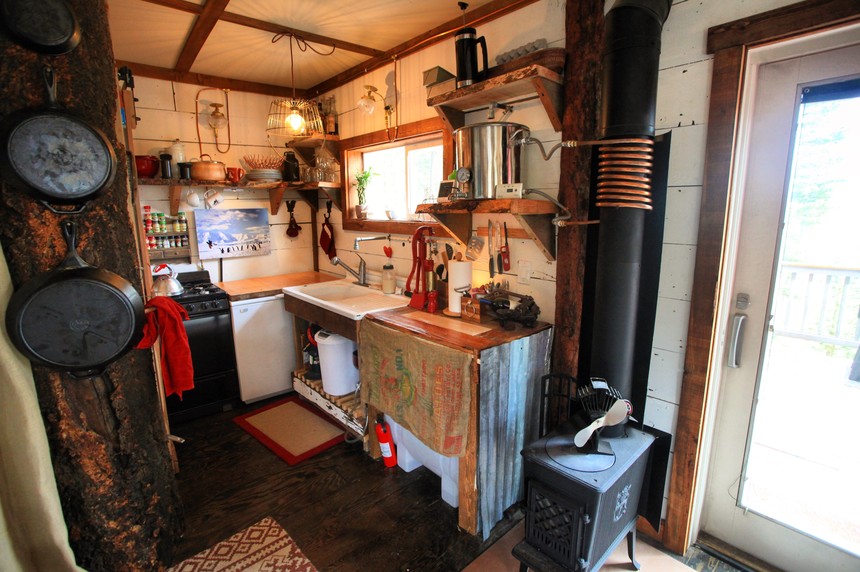 Everything is sustainable, reclaimed, and has a story. Busby photo.

“Every piece of this house has a story and that was really important to me while building it,” says Sean. “Eighty percent of the house was built from reclaimed materials. The frame and support systems were made with timber from our property.” They found the rest of the materials from houses that were torn down and their sliding glass was found at ReStore by Habitat For Humanity. 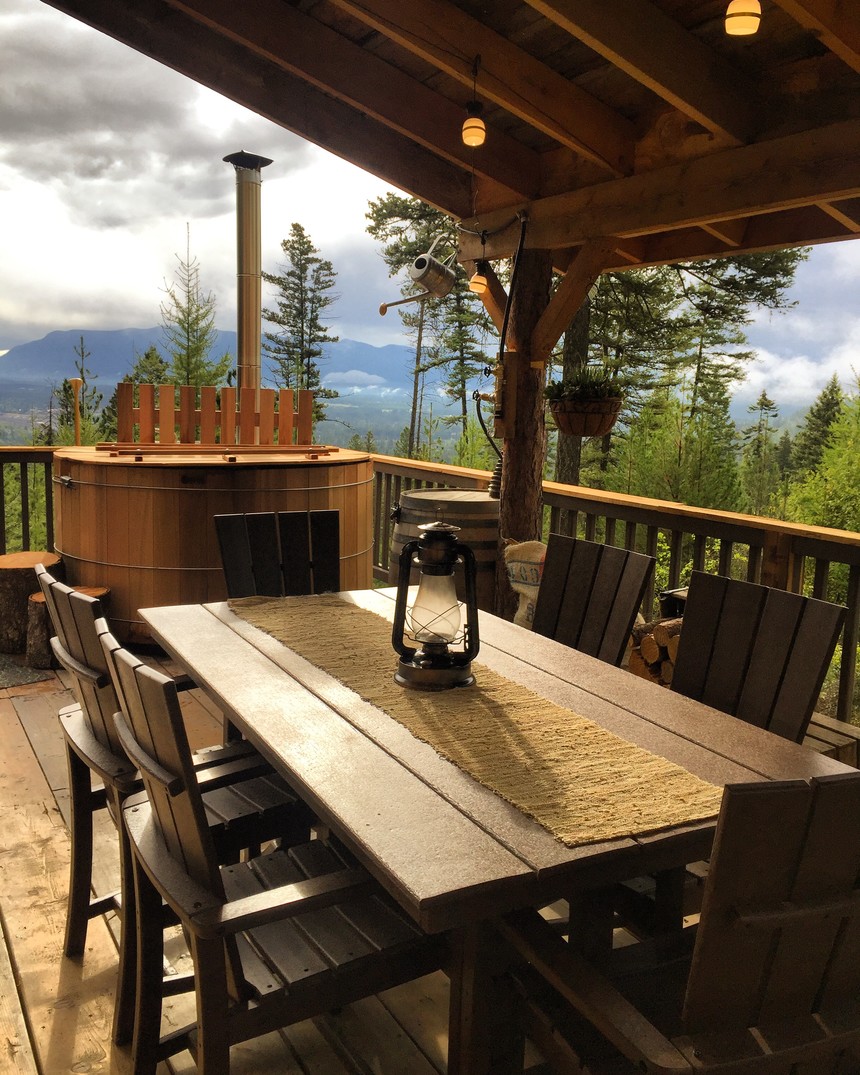 Not bad. Not bad at all. Busby photo.

Ultimately, this lifestyle Mollie and Sean have chosen grounds them. That’s why they are still doing it despite so many wrenches thrown in their show. “I can choose to dwell on the fact that I’ve been dealt some shitty cards,” Sean says. “Or I can be skinning up to the yurt and be like ‘man, this is so rad I am so grateful for everything I have and I have been given so much.’”

And as far as what’s to come? Mini Busbys perhaps, and maybe, a treehouse.

Love seeing what the rad residents here in Flathead Valley are getting into!

This is amazing, probably you should have invited us to your house warming ceremony. Anyways Great to see !!

I all the time used to study paragraph in news papers but now as I am a user of web thus from now I am using net for content, thanks to web.

Even in these circumstances they are living a happy life. Salute! Its a beautiful Valley.
Happy Fathers day Wishes are really important.

So neat! Enjoyed this article.
B | Owner of drywall repair Columbia SC