A few months ago, my husband, Sean, handed me a brochure with the headline: Wilderness Woman Competition of Talkeetna Alaska.

“Check this out,” he said. “Too bad we’re married. You could have competed.”

I rifled through the pamphlet and read about the weekend-long event in Talkeetna: The 31st Wilderness Women’s Competition (WWC) and 36th Annual Bachelor Auction and Ball.

The premise is simple: Single women from all over Alaska (and a handful from the lower 48) descend on the tiny town on the edge of Denali National Park for the chance to compete for the Wilderness Woman title, and — even more alluring — attend a Bachelor’s Auction to bid on 20 or so eligible Alaskan bachelors. Reviews online rave about the weekend as a cornerstone event for the community. Not to mention in 2015, the event — which is hosted by The Bachelor Society, a local nonprofit — raised over $22,000 for Alaskan charities and supporting women and children that have been victimized by domestic violence and/or sexual assault, an incredible feat for a town of fewer than 1,000 residents. 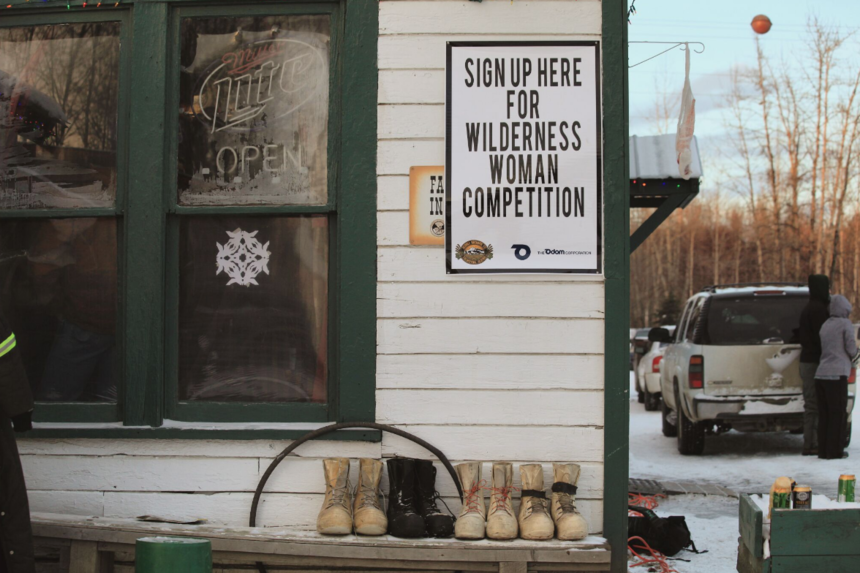 Each woman would don a pair of Alaska’s signature bunny boots (pictured above) to level the playing field in round one of the comp. Mollie Busby photo.

A few of the events in the competition sounded quite like my own life off-grid: Hauling water, sawing and transporting firewood and driving snowmobiles. The kicker — and what any feminist without a sense of humor would consider appalling — is making a sandwich and delivering a beer to a bachelor as he relaxes in a recliner. I scrunched my nose and chuckled, but my curiosity was piqued. I had to see it for myself.

A month later, we found ourselves in bitter-cold Talkeetna, lodged at a nearby B&B. After grabbing a bite at Twisted Creek downtown, we cruised over to the VFW. The “Meet & Greet” is a chance for women to scope out the bachelors before Saturday’s big auction. The bar was packed with typical mountain folk, sprinkled with what I could only assume were local Talkeetnans, whose proud, weathered faces told me they’d been there a while. Eventually, the sea of Carhartt jackets, flannels, and puffy-coats-repaired-with-duct-tape headed into a side room for “The Mating Game,” the town’s version of the gameshow, “The Dating Game”. Each of two rounds featured a bachelorette and three bachelors. She asked pointed questions, and without seeing the bachelors on the other side of a screen, the bachelors answer. Then she picks a winner based on their responses.

At one point, a friendly girl sitting next to me who had driven from Anchorage with her girlfriends, asked me, “Are you competing tomorrow?”

“Me? Oh, no! Of course not.” She lowered her voice and leaned in, “There are women that train all year for this. I wouldn’t stand a chance!” My anticipation for the following day’s festivities reached its peak — and I seriously considered taking my ring off and joining the fun. 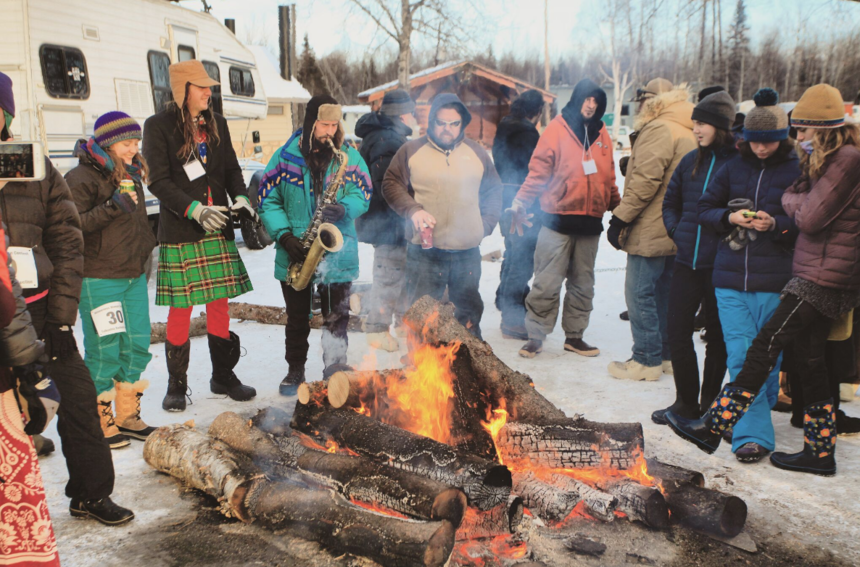 A group gathers around a bonfire before the competition gets going.

The next day brought clear skies and temperatures in the single digits. The wind had a bite, promising to up the ante for the competition. Armed with our cameras and hand warmers, Sean and I ducked back into the dimly lit Fairview Inn to check out the scene.

Women from all walks of life — in addition to a good number of the bachelors — packed the place out. The crowd was downing drinks, shots and bloodies like a mid-morning college tailgate party, snapping selfies on their phones, pinning on their competition bibs, and doing exactly what I was doing: scoping out the competition.

Outside, groups of women huddled somewhat nervously in anticipation around a huge bonfire. A tall woman stood out from the crowd with colorful unicorn leggings and a bright smile. I heard a bystander ask her, “You won last year?” The girl — who I later learned was reigning champion Trina Pastarr — nodded, with a big smile as her friends let out a cheer. They had returned from Anchorage for a second year to watch Trina (hopefully) take home the championship again.

I approached a group of particularly hard-core looking women, all wearing thick Carhartt overalls, and asked if this was their first time to the event. They nodded and told me they’d driven from Healy, where they all work for the Park Service. When I asked if they thought they stood a chance, to my amazement they shook their heads and one added, “If any of us stand a chance, it’s Molly.” Their blonde friend shook her head humbly with a smile. I confessed that they all seemed like they could kick ass with the gear they’d donned.

“These?” one of the girls gestured to her Carhartt snowsuit. “These are just our actual clothes!” 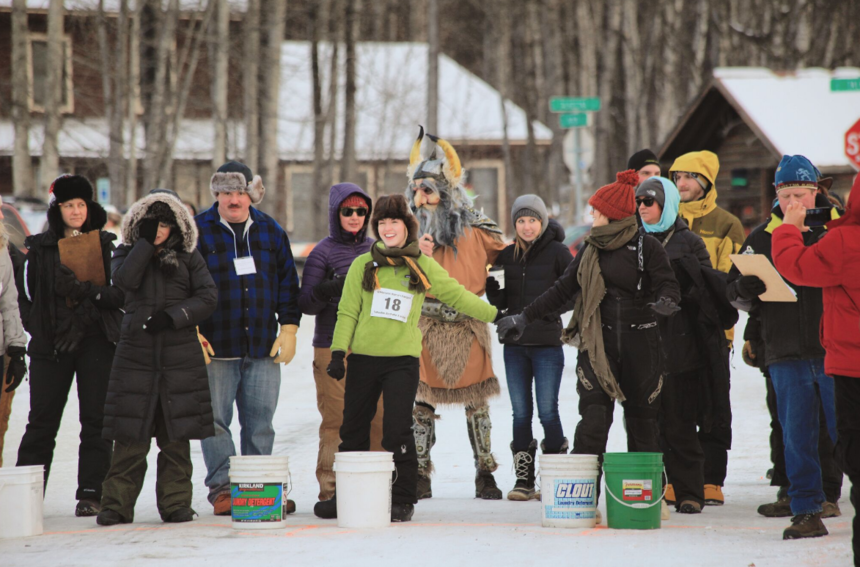 Round one. Mollie Busby photo.

Right on time, Todd Basilone — emcee and President of The Bachelor Society, rallied the contestants in heats of four. Each woman would don a pair of Alaska’s signature bunny boots to level the playing field, and take her place on the start line in front of the Fairview. On go, they were instructed to grab their two empty pails from the ground, and sprint as fast as possible to the opposite end of the street, between the historic Roadhouse and Mountain High Pizza Pie, where they would trade for two full pails of water. Carefully but swiftly, contestants would carry one in each hand all the way back — judged on speed and amount of water lost en route.

Standing at the start line, Todd took a quick interview with one of the competitors, asking her why she was competing. She responded with a war cry, “This one is for all the girls who have put their warm butt cheeks on a cold outhouse seat in the middle of winter!”

That is a war cry I can get behind. (Pun intended.) 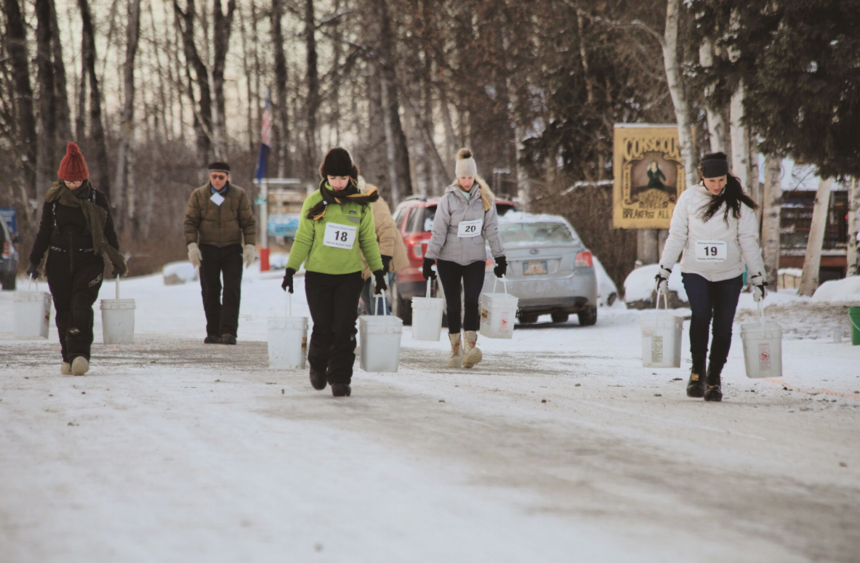 Round after round of women tried their best to haul water and cross the finish line (only to be handed an ice cold beer); in the end, only the top five made it to the final two rounds of the competition. After the final heat, Todd announced each finalist. Instant respect for the finalists among each group of friends materialized — some amazed that her own name had been called, and others expecting nothing less, including our friend in the unicorn pants.

From the crowd huddling around the fire, I overheard a bystander ask a friend, “Did you hear Trina set a new record? 58 seconds!” 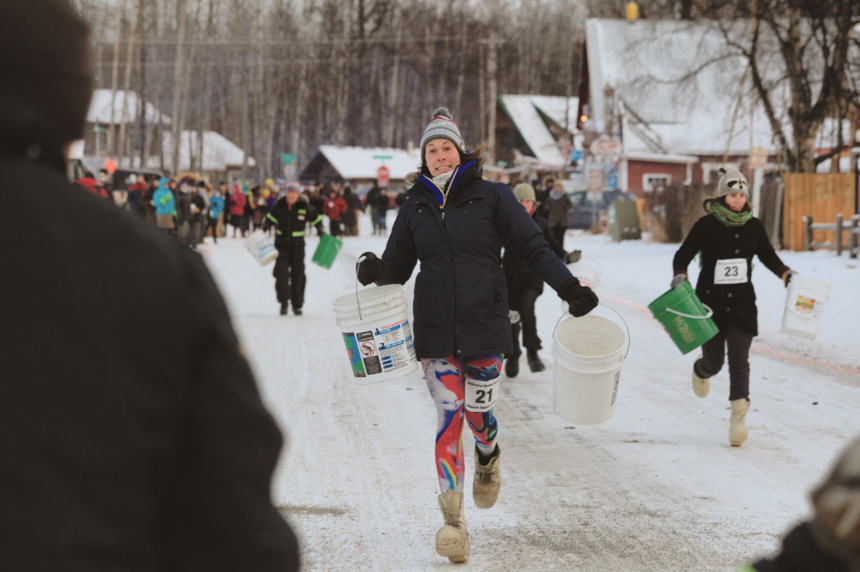 The one in the unicorn leggings is the one to beat.. Mollie Busby photo.

Round two started with the aforementioned feminist nightmare, with a Wilderness Woman twist that can make anyone smile. After making a sandwich and cracking a beer, the contestants deliver the “meal” to a bachelor in a recliner in any fashion they choose, including tossing, dumping, or throwing. The lucky bachelor on the receiving end was offered a trash bag to wear, and happily donned on the plastic barrier. 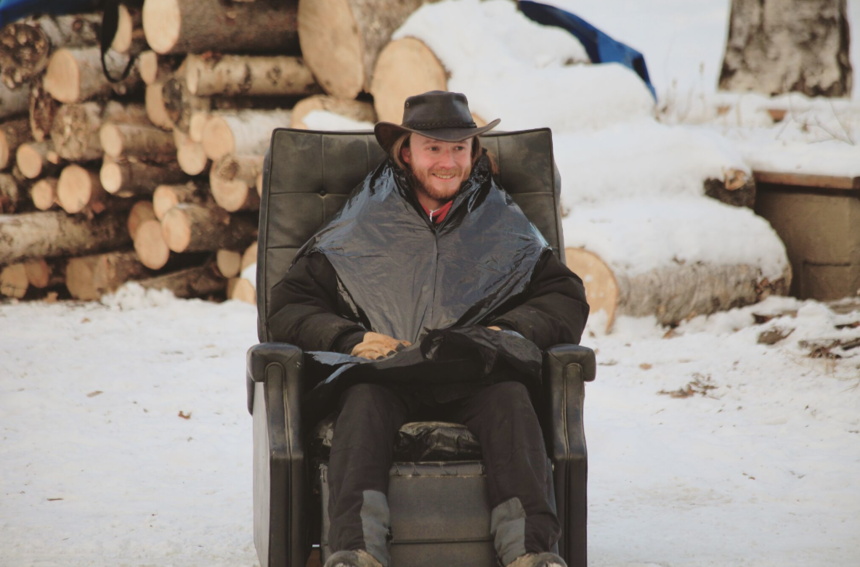 After the meal prep, contestants ran onward to hand-saw a log for firewood, and toss it, along with a few other logs into a sled attached to a snowmobile. Most of the girls showed incredible prowess for this skill, but when one competitor struggled, the men in the crowd yelled with encouragement.

Once complete, each woman drove the snowmobile for a lap around the park as fast as possible before hopping off the sled and unloading the firewood into a spray painted rectangle in the snow. 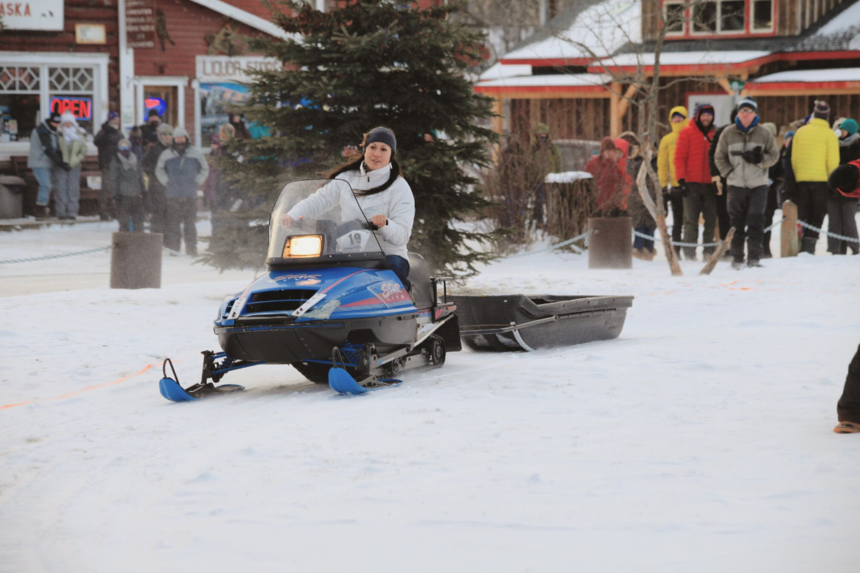 No times were revealed after the second round — it was early afternoon and it was onto round three.

A multi-phase event, round three started by strapping on a backpack, running to the fishing hole—a spray painted line in the snow, adjacent to a spray painted “pond” with magnetic stuffed fish. After “catching” a fish, she would the fish in her pack, dash to the next station and strap on a pair of old fashioned snow shoes. Tromping through the snow, the third station involved a BB gun, and Ptarmigan shooting —simulated by shooting small white balloons on a plywood board. After shooting three successfully, the bachelorette continues along in her snow shoes, climbs a tree (or a ladder leaning against a tree) to ring a bell. Before dashing across the finish line to give a bachelor a kiss, she must point a laser gun at another bachelor in a moose costume — demonstrating her capacity to defend her own safety in the Alaskan Wilderness. 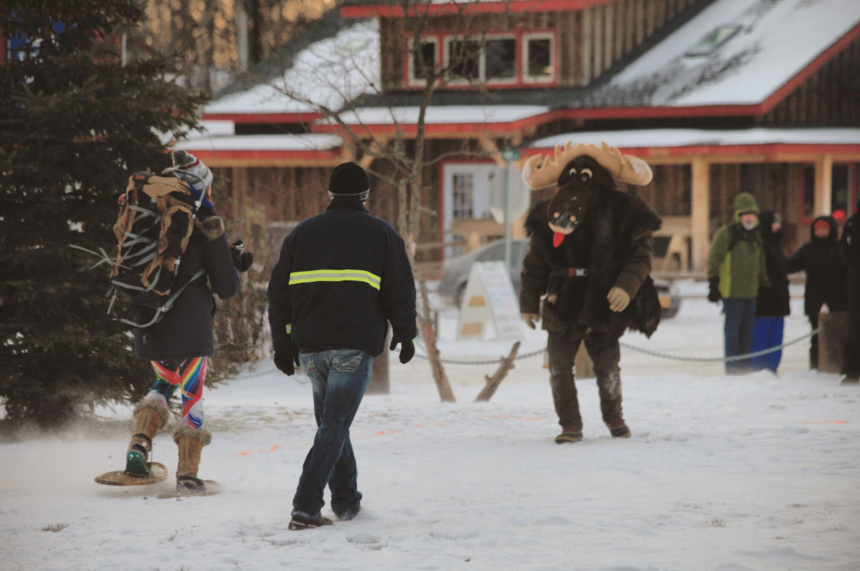 Trina completing the final round for the win. Mollie Busby photo.

While there were struggles with the ptarmigan obstacle for a few of the women, each contestant made it through the course with remarkable ease — the crowd groaning at their perils, and cheering as each moved to the next hurdle.

Although I wasn’t able to attend the infamous Bachelor’s Auction later that evening, it was no surprise to hear that Trina had, indeed taken home her title for another year. However, it was a surprise to hear the whole event raised nearly $25,000 in just one weekend.

As Sean and I merged back on the road after an incredible Talkeetna experience, I reflected on the good spirited, well-run, and extremely well-intentioned fundraiser benefiting women in need. It was truly a testament to the power of community, hard work and preparation, and perhaps most importantly, unicorn leggings.

For 1 Week Single Women in AK Gather to Compete in…

After closing lifts and mountain access on March 14 to help prevent the spread of COVID-19, Washington’s Crystal Mountain will re-open skiing and snowboarding on June 1. Following models first used at spring ski destinations like Oregon’s Timberline and Colorado’s Arapahoe Basin, Crystal will use a reservation system to limit the number of guests on the mountain at the same time. Season passholders and Ikon Pass holders will not be given priority, but will still get to ski for free if they