Editor's Note: The following is TGR Senior Contributor Sam Morse's recounting of true-life events that transpired two summers ago on the Hoback River. A strange experience to say the least, the story details the depravity some people will resort to in order to exclusively possess a coveted spot. A note of caution to the intrepid adventurer: legends of the poopetrator endure, and many believe he is still out there, pooping and preying on the campground's of the innocent. This story was originally published in June 2016. 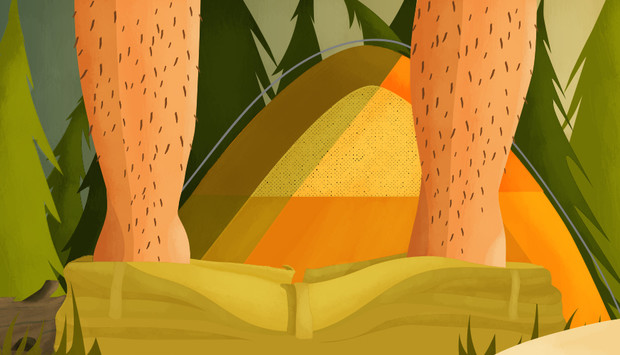 A brutal action; a power display; an unholy desecration — by any name, a shitty situation. Katherine Lozancich illustration.

Once upon a time, someone shit on my campsite.

Annie was a climber and I was a raft guide. Two summers ago we dated. Like ski town star-crossed lovers from different sides of the bike path, I wanted to show her what being on the river was all about.

Few experiences bring people together like a river trip — even crappy ones. Charlotte Best photo.

A few weeks into our 90-day union I decided to take Annie on an overnight rafting trip down the Hoback River to consummate our relationship. The Hoback, a class III chill-fest with plenty of fun rapids for a beginner, also had what I’d noted on previous runs to be a very “romantic” cave-like campsite just downriver of the appropriately named Stinky Springs.

She had housing, I had a Honda — it was perfect.

Fate would assure that it was extra stinky for us on this occasion.

We set off late, dropped a shuttle car at the Astoria boat ramp, then drove up Hoback Canyon to rig our trip at Granite Creek. Along the way, we stopped at the “romantic” campsite to deposit some extra dry bags and a box of firewood for the night’s sensual ambiance.

The shadows lengthened and the breeze began to bite, and very soon, we rowed into an eddy just above our temple of temptation. 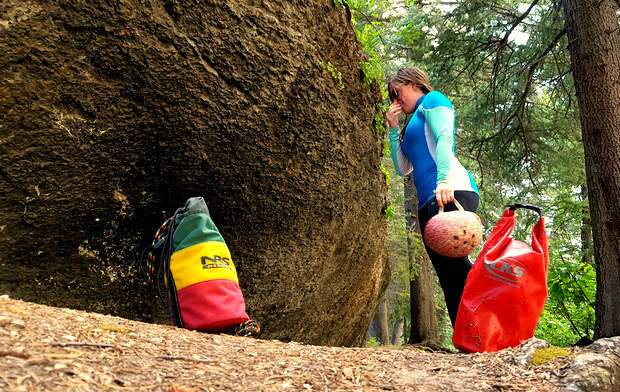 "Annie" struggles to reconcile the pile of steaming human feces that is sitting on where she was planning to sleep. Sam Morse photo.

Soaking wet, we climbed out of the raft and began unloading. I sent Annie to the site with an armload of gear as I tied off the boat. She returned with an acute sense of panic emanating from her eyes. She was horrified.

Shivering from the cold and shaking with hysteria, she struggled to reconcile what she had found downriver.

“Someone. Pooped. On our campsite…” she choked.

Inside, I laughed. Surely this was some discarded dog shit we hadn’t noticed earlier. I said as much, and she became deathly serious.

“No. Sam. Someone. Shit. On. Our. Campsite!” Her eyes growing wider with each word.

I followed her down the riverbank to our spot. There, in the middle of the site, in the middle of our two dry bags and box of firewood, sat a huge pile of fresh human feces. A soiled piece of toilet paper capped a puddle of urine. 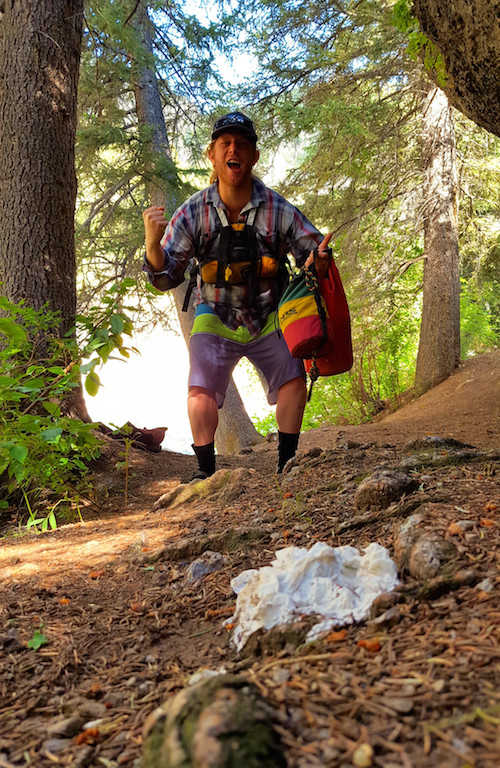 Someone had, quite literally, just shit on my idea of romance and of sharing a wonderful experience with my beautiful girlfriend.

Time to cut our losses, load the raft back up and continue on downriver. We wanted to get the fuck out of there. But we couldn’t. Darkness descended. We were cold and wet. My car was 10 miles up the river. Annie’s was 10 miles downriver. It wasn’t safe to continue.

We had to camp with the shit.

This realization and a thousand other questions slammed into me like 20,000 CFS of fecal matter.

I explained our predicament to Annie, and told her I’d deal with the shit. She walked back to the boat to retrieve gear. In her absence I flung the crap into the river with the aid of a piece of cardboard ( Leave No Trace gods please forgive me). To mask the visual evidence of our site having recently been a stranger’s toilet, I kicked around some dirt. Camp clean, I helped Annie unload the boat, all the while wondering if 1.) a meth-head was watching us from a hidden spot and 2.) if we were in real danger. 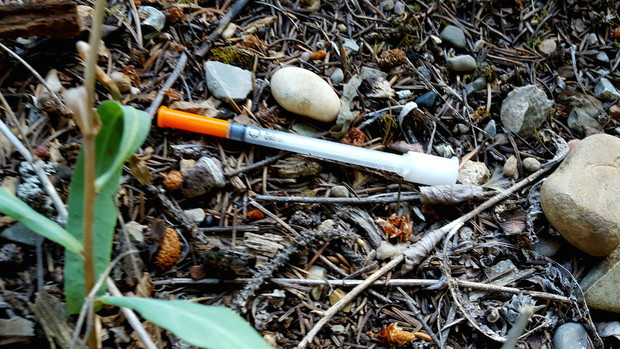 On the menu: vegetables, curry, fine microbrew — and the smell of urine. Mmmm.

Dinner was actually delightful. In spite of the extremely weird situation — was a psycho shitter/killer going to come and murder us at any moment? — we enjoyed our protected campsite and the enchanting illumination of fire’s glow.

Bedding down, my knife close beside me, I laid awake long after Annie fell asleep. Constant fear gripped me, and questions tore at my psyche. 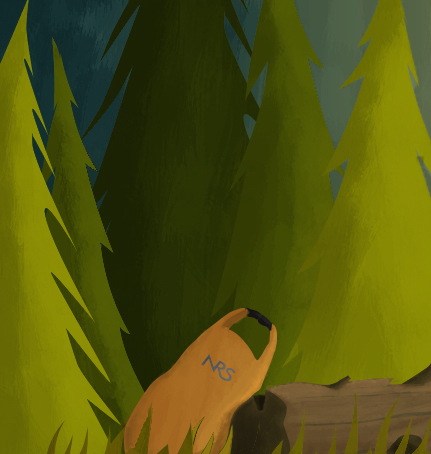 What kind of person shits on another’s campsite? Is that a thing? Why had someone done this? Why poop, but not steal anything? Who was this poopetrator? Were we in danger? Had we unknowingly claimed a site someone else had planned to use and this was their retribution? What would drive me to shit on someone’s campsite?

It made no sense.

RELATED: Between Two Walls – The Story of a Grand Canyon Evacuation

Sleep was impossible. Each new imagined scenario drove me further down the soiled rabbit hole to madness. All night, I just laid there, tripping out — staring at the limestone roof…

What if the poopetrator came and tried to kill us? Would we end up as that cliche young couple murdered under mysterious circumstances? If someone did show up, would I fight if I had to — and potentially kill — was I capable? What if they poop on me? How will I recover from that?

Is it possible that Annie was the poopetrator?? Nooo! But maybe…What if she had to poop really bad, but didn’t want to tell me because she was self conscious? Was she going to shit herself on the river? Maybe she pretended it was someone else to save face…? That’s fucking weird!

Maybe a jealous ex-boyfriend did it. That kinda makes sense. Maybe the guy found out we were going on this overnight and attempted to sabotage the whole thing…? Dude, that’s fucked up!

Maybe a bunch of deuschy frat bros did it. This is just one of their “cool” pranks they pull on people. God I hate frat bros!

There was no justice — or clean way to roll up our awful experience. Katherine Lozancich illustration.

As it turned out, we survived the night, and none of my darkest thoughts came to fruition. But honestly, this story might have been cooler if something crazy had happened. An epic struggle with a meth-head, or a confrontation with an impassioned ex makes for much better reading than reality actually provided.

The truth is, some stranger really did poo on my campsite, but I don’t know who, or why — and I was never able to claim my vengeance for the unholy desecration.

In a good book or a Hollywood movie, I’d have wrestled that meth head into the Hoback and sent him to a watery grave, or at least a cold-hard lesson. But in real life, sometimes people just shit on your day, or your plan, or surprisingly, your campsite. Some loose ends aren’t meant to be tied up.

When the poopetrator shit on my camp, there was no closure, no way to paint it into a pretty picture and enjoy a satisfying ‘The End.’ I’ll never know who the fuck did it, and unfortunately, all I’m left with are questions like a steaming pile of shit in my hand that can’t be washed clean.

Someone Shit On My Campsite: A Tale Of Ski Town Woe

Snowed In at Silverton: The Best Damn Week of My…

Getting Our Skis Confiscated – Twice – On…

Check Out This Splitboard Expedition To The…

DPS Cinematic Shreds DEEP Pow in the Olde Alps in…

The Youth Will Save Us–One Pro Skier’s…

Storm-Chasing in Northern BC: A Smithers Trip…

How To Become A Fugitive In Bali

Finding a Key in Summit County

Glass Half Full: The Neutrino Couloir at 21%…

Big Lines, in September, in the Canadian Rockies

Splitboarding 4 in 1 Day in the Aussie Backcountry

Measuring Melting Ice: A Summer In The Field

Skiing Patagonia After A 4-Foot Storm

The title you have put for this blog post is so catchy. I like the way you present your blog here. Creativity can be seen at this post. Good and do more work and the blog posts here.