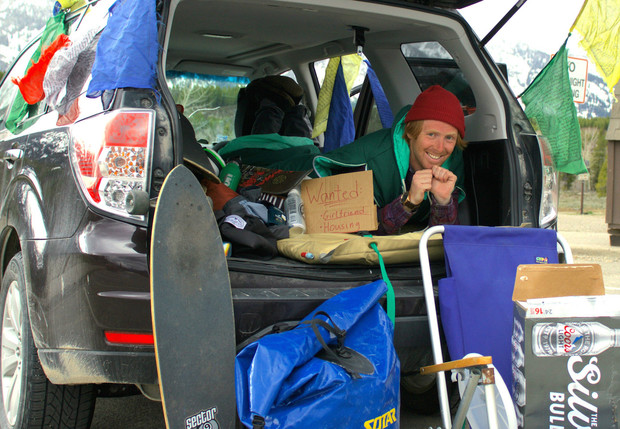 Tommy Johnson starts the day with a Silver Bullet on the doorstep of his offseason residence, aka his Subaru. Sam Morse photo.

The seasoned TGR intern, oriental rug expert and veteran pizza tosser said he was really excited to get to know someone intimately for "no longer than 3 months," as long as he can be assured of the ability to sleep in a real home a minimum of four nights a week.

The ad ran in a variety of Jackson Hole publications including the local newspaper, Buckrail, Craigslist, JH Media, E-harmony and Grindr, although as of press time, Johnson insisted he’s only seeking female respondents.

“I’ll do anything for love,” the intrepid ginger told TGR during a Skype interview. “As long as it’s the type of love that I can bail on in September. And there's a roof I can sleep under.”

Koekkoek’s calls for affection came as no surprise to a plurality of Jackson locals, as recent summers have yielded River Rat invasions, construction of shanty village workforce housing, and a municipal relaxing of laws governing car camping on public streets. But the amorous lothario made clear to TGR that he’s not willing to settle for just any summer fling.

“Ultimately, my standards are pretty low,” Johnson explained. “I’ve been pissing in a Nalgene bottle for over two weeks now, and ever since a can of bear spray went off in my Subaru, everything I own sets my skin on fire. So, I think I’m finally in a place to be a great boyfriend!"

As part of the deal, the ad promised endless back rubs, shuttle duty up the pass, an unlimited supply of Pinky G’s pizza, and ecstatic sex lasting “well over 10 minutes.”

Is this jerk for real?? Go big or go home.  Or to the used Subaru dealer.

I would love too, too bad it’s too far.

Is he serious hahaha who would agree?!