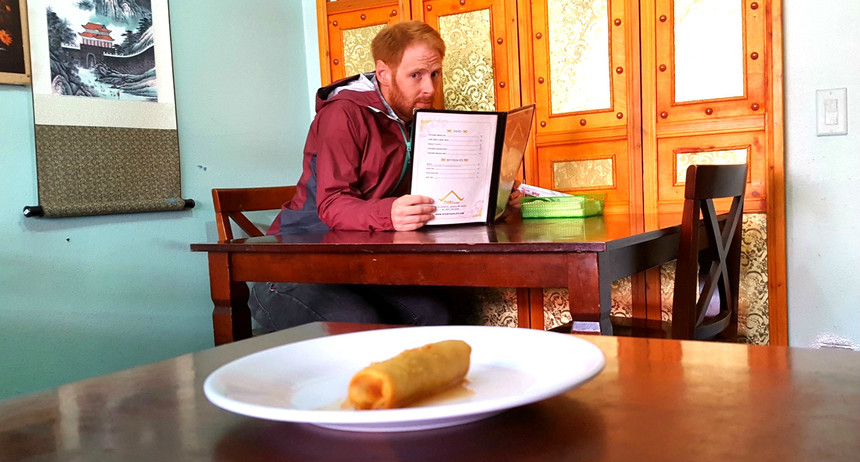 JACKSON, Wyo. — A hungry ski bum was banned from his favorite Thai restaurant Wednesday after what was intended to be a quick egg roll theft snowballed into a “5 star” public shaming.

Famished and low on funds due to a lack of off-season work, local housing entrepreneur, Tinder survivor and infamous cougar hunter Tony Koekkoek, 24, was allegedly planning to order a low-dollar item at local perennial favorite Thai My Shoes. But sources indicate his plans were thrown into disarray when a visiting Chinese family at a neighboring table discarded several half-eaten dishes, as well as a "delicious-looking, untouched” egg roll.

Peeking at the second-hand bounty over the top of his menu, the enterprising Koekkoek spent approximately 37 seconds mentally deliberating if he wanted to be “that guy,” before shrugging off his inner shame and lifting the unwanted portions of yellow curry, pad-see-ew and, of course, the lone egg roll.

According to eyewitnesses who were dining at an adjacent table, the bro consumed the dishes as quickly as possible to avoid the judgment of the restaurant’s wait staff. However, the “Thai Spicy” food quickly caught up to — and overwhelmed — the hungry ski bum, sending him into a coughing fit that left him sweating and crying in a fetal position on the floor of the establishment.

“The dude went into convulsions,” witness Russ Billings told TGR. “If those leftovers hadn’t almost fucking killed him, no one would'a known he's moved on that."

Koekkoek’s anaphylactic shock alerted the wait staff to his nefarious activities, causing them to dump water on his face, kick him in the nuts and then promptly 'throw his ass out the door.'

Billings asserted that the commotion caused by Koekkoek’s anaphylactic shock alerted the wait staff to his nefarious activities, causing them to dump water on his face, kick him in the nuts and then promptly “throw his ass out the door.”

“I hate it when skids come in here and try to take advantage,” Thai My Shoes owner Panit Mongkut said. “If someone can’t pay $18 for an entree — rice not included — then why are they here in the first place?”

TGR sought an interview with the on-the-mend Koekkoek, but as of press time, he was still under observation at St. Johns Medical Center undergoing milk-capsaicin therapy. In a written statement, attending physicians insisted the lovable ski bum is expected to make a full recovery, albeit sans thai food for “no less than the duration of the winter ski season.”

Mongkut has since banned Koekkoek from Thai My Shoes, but the bro’s friends and family assure TGR that he’ll eventually learn to live with and enjoy one of Jackson’s other 11 thai-themed restaurants.

This is really awesome for those who want some thing awesome and good as you know.
http://apkhook.com/

This is amazing one out of a genuine presence time understanding. A significant’s buddy of mine who visit troyallschoolreunion.org daily or two back. he is expecting to invite me like the one communicated beforehand. The desire I can make it!

Mind blowing concept are this website, and you will enjoy the most useful article are there if you are choose the article firefox for windows  are you are edit and add the more best content are this website you are connect the follow some easy instruction.

Black B3 Bomber Shearling Jacket is available in our store, you can easily buy from Instylejackets. hight quality leather with Soft Internal Shearling jacket, Front Branded Zipper Closure,
and Shearling Shirt Collar. Its warm jacket and so comfortable to wear.

Nice and great to see about this cool updates Jennifer Lawrence played the role of Tiffany Maxwell, a recently widowed young woman. We have on offer the Tiffany Silver Linings trench coaton our online store for all the female fans of the star with Jennifer Lawrence Tiffany Coat

This is one of the best option to update the information regarding the interesting sport so I am a follower of this site and I was excited to know about the sky diving in such adventurous types of sports https://www.doescbdhelp.com