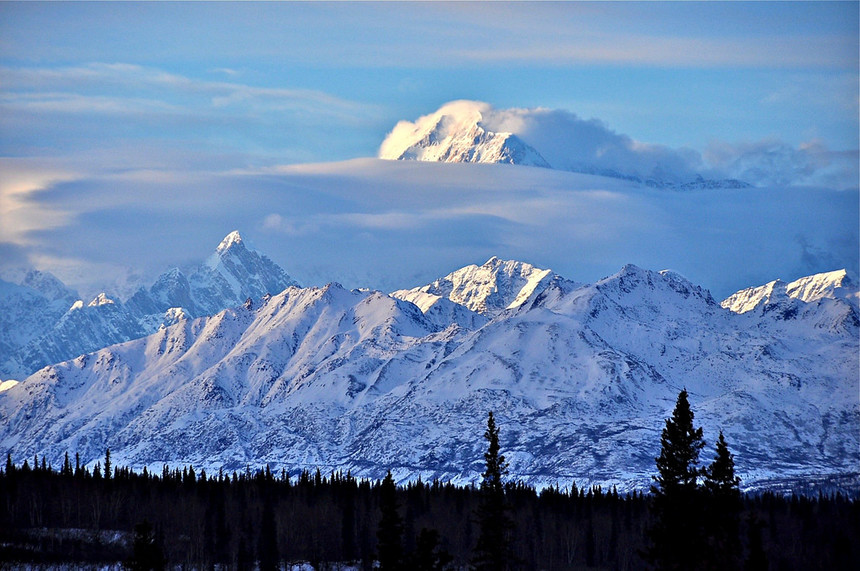 Pictured here: The majesty of Denali in all of its towering grandeur. Not pictured here: The literal tons of human waste contaminating the glaciers on the mountain. Cecil Sanders/Flickr photo.

The summit of Denali looms more than 20,000 feet in the air. It is the centerpiece of Alaska’s 6,000-acre Denali National Park and Preserve. Reaching the top can take skilled mountaineers weeks. The routes are long, technical and arduous, and to make matters worse they are all peppered with human feces. Truly.

From 1951 to 2012, 36,000 climbers have set out to summit Denali. Michael Loso, a National Park Service geologist, has calculated that in that time those mountaineers have left behind 215,000 pounds of poopy. That’s more than eight-and-a-half school buses worth or the equivalent weight of 16.5 African elephants or 3,307 golden retrievers. Any way you cut it, that’s a lot of poop.

So, why so many plummets near and around this famous summit? Well, a “pack it in, pack it out” policy has only been in practice since the late 1970s, and laziness effects all humans, even mountaineers. In recent years, the NPS has been requiring mountaineers to remove all of their waste and has made efforts to clean up historically gross locations on the mountain, like the West Buttress camp at 17,000-feet. In the early 2000s, ranger Roger Robinson created Clean Mountain Cans, or CMCs, a portable toilet system. Basically, it’s a biodegradable bag inside of a bucket. The policy has been to do your business in the CMCs and pack out the number twos or dispose of filled bags in designated on-mountain locations, like tossing the turds into a deep crevasse. Seriously. 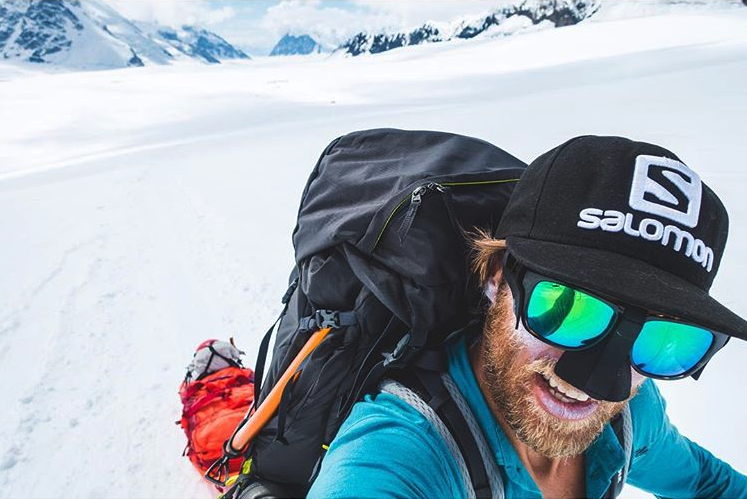 Cody Townsend seen during a recent trip to Denali. No word on whether Townsend had to pick up after climbers on this ascent. Cody Townsend/Instagram photo.

Yet, there are some that leave their boom-booms behind, which is more than a slight hassle for other climbers, as pro skier Cody Townsend found out when he became a part-time poop transporter during his ski expedition to Denali last year.

“Luckily, our encounter with other people’s poor poop management didn’t involve free range poops,” says Townsend. “At 14,000 camp, the people before us decided to just leave their cans and tied up bags buried under a few inches of snow instead of carrying it out or chucking it in a designated crevasse. They were just lazy a-holes. We ended up carrying their poo to the crevasse to chuck it in.”

Other than poop being gross, the real issue is contamination. Climbers melt snow for drinking water and if that snow is­–ahem–soiled, well, drinking doo-doo water causes major illness. So, who in the hell are these delinquent deucers mucking up the water supply? Well, it’s not just the novices. Into Thin Air and Into The Wild author Jon Krakauer is one of them. In 2016, the Anchorage Daily News reported that a NPS ranger caught Krakauer with his pants down. He was climbing with Conrad Anker. Yes, THE Conrad Anker. If the most knowledgeable and well-known climbers are dropping bombs on Denali, then it’s safe to assume regular folks are following suit.

However, sometimes nature calls at an inopportune time. Brody Leven, professional skier of snowless and grimace-inducing ski descents, has a handful of Denali expeditions under his belt. Suffice to say, Leven is well-versed in the national park’s crevasse chuck-a-dump system. During a Denali National Park expedition last year, Leven was attempting the first ski descent of the classic ice climbing line “Ham and Eggs.” Halfway down, Leven’s belly started to boil. Corking it wasn’t an option. It was go time.

“I had to stop in the middle of a super narrow ice couloir, use my adze to try to make a small stance at a steep anchor, and do my business,” Leven says. “With firm ice as the only surface, there wasn’t much of a place to hide it. Point is, you don’t always have the CMC when you need it.” 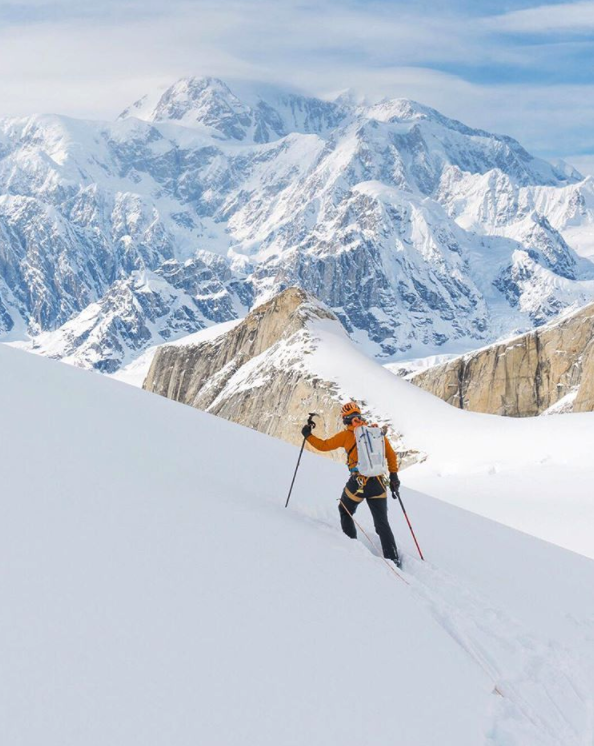 Leven climbing up Denali. Lucky for Leven (and readers) there were no cameras present during his, shall we say, compromising Ham and Eggs ice climbing moment. Brody Leven/Instagram photo.

Luis Benitez, former professional Everest guide and current director of the Colorado Recreation Industry Office, says that dealing with other people’s poop is a historic climbing issue, albeit unfortunate.

“Climbers from different parts of the world have different ideas of where to dispose of it,” says Benitez. “Could you find a line smeared with shit every once in a while? Yes. Would you find poop bags just off the trail? Yes.” Benitez has even been privy to some calamitous climbing craps. “A friend of mine who shall remain nameless,” Benitez explains, “pulled off his down suit on Everest to drop a number two and [unknowingly] pooped into the hood of his suit. Then he put that down suit back on and then, well, I bet you get the picture.” It would seem that summiting isn’t the most difficult part of mountaineering.

But for Cody Townsend, the deuce dilemma on Denali is solvable. 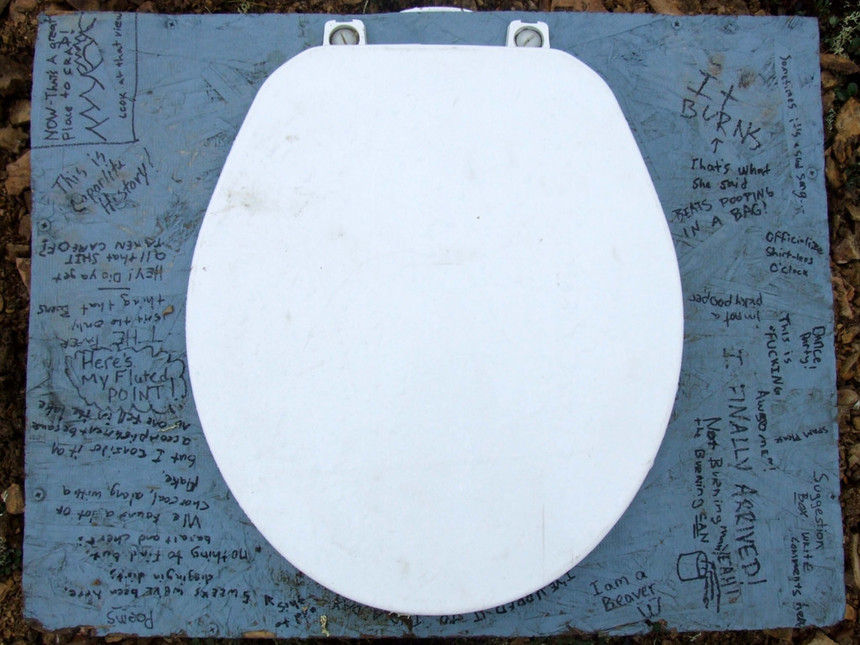 A toilet adorned with poems and graffiti in the northern reaches of Denali National Park. Unfortunately, once you begin climbing Denali, basic luxuries like this spartan toilet are nonexistent. Travis/Flickr photo

“With the new information, it seems like there is only one crevasse, the main one at 14,000 camp, that scientists believe will properly crush, pulverize, and subsequently push your poo off a 2,000 foot cliff into no-mans-land,” Townsend explains. “I’d carry all my brown trout up to the proper place and dispose of it in the proper way or just bring it on home to make sure we leave that mountain and that route as pristine as it should be.”