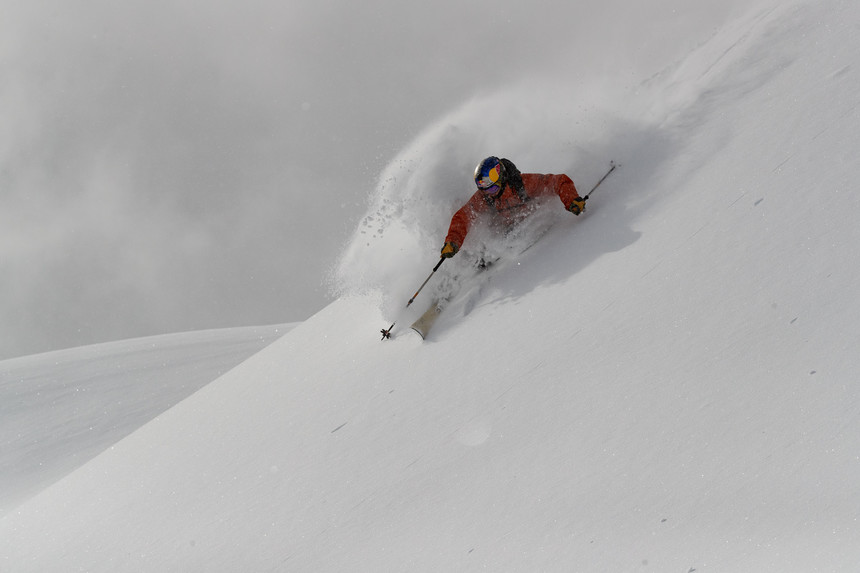 John Collinson has made this kind of turn in the Wasatch over and over again - but are we coming to a point where the future of skiing in Utah is at risk? | Jeff Cricco/TGR photo.

Imagine this: you sit in immovable traffic, waiting to go skiing. You sip your cooling coffee, take a bite of your local on-the-way coffee shop burrito, and curse both the snow and the traffic gods for not blessing you with either plentiful snow or clear passage. Your car idles as you turn up the radio and settle in for the long haul. This car that idles and burns the fossil fuels that contribute to the climate crisis which leads to less snow and more rain which means less skiing and more runoff that doesn’t make it to the waterways which leads to less crops and less available fresh food and struggling avian populations…. Oh, the irony.

This is a tale as old as (recent) time, and nowhere is it more apparent than in the Great Basin of Utah, which encompasses the Wasatch mountains, Salt Lake City, the Great Salt Lake, and of course the famed ski resorts of Utah. Since 2018, the average low temperatures during the ski season at all of Utah’s 14 ski resorts has increased an average of 2.6 to 6.7 degrees Celsius and the Great Salt Lake has already shrunk by two thirds. This will have huge ramifications throughout the Great Basin Area, from agricultural industries to the migratory patterns of countless shorebirds to the precipitation that bring our sweet, sweet powder. The lake contributes an estimated $1.3 billion annually to the Utah economy through mineral extraction, brine shrimp harvesting, and indirectly through recreational activities like our beloved ski resorts. What happens if it continues to dry up?

This is not a new story in the grand scheme of climactic clickbait, but some of the ramifications of the Great Salt Lake’s desiccation are certainly unique. The lake bed contains high levels of arsenic and, should the lake continue to dry up, the infamous Utah winds could easily pick up arsenic dust and carry it into the lungs of nearby Salt Lake City residents, who comprise three quarters of the state’s population. The second irony of this story lies in the fact that some of the minerals extracted from the lake are used to make dust suppressants. Go figure. This is all to say nothing of the impacts on skiing in the Wasatch.

“It seems like it's not the way it used to be according to the real local folks,” explained Ben Smith, a Salt Lake-based skier known for such things as skiing all 48 4,000-footers in New Hampshire in one season. “I moved here in one of the lowest years on record so I'm just happy to be skiing. Based on the water levels in the reservoirs every year it seems like things are just not right.”

These ‘not right’ reservoirs, lakes, and other large bodies of water provide passing storms with much of their moisture, however this typical moisture uptake will decline as the Great Salt Lake continues to shrink. This means less precipitation will make it to the Wasatch mountains, also known as the home of such big shots as Alta, Snowbird, Powder, Deer Valley, and Solitude, among a few other heavy-hitters. With less snow in the mountains, and often with a higher percentage of rain from increasing temperatures, there is less runoff that makes it to the shrinking Great Salt Lake, not to mention that this runoff is what Salt Lake City primarily relies on for its drinking and agricultural water supply. Skiing in the area has already suffered from less and wetter snow, and the problem will continue to perpetuate as the area grows. “The population is growing fast, there's no doubt about it. Skiing is a luxury and it ultimately isn't that important,” conceded Smith as we chatted about the bigger picture.

One option is to allow more snowmelt to enter the lake: seems simple enough. The issue with this idea, however, lies in the expansive agricultural industry that sits between the mountains and the lake. Fill the lake, drain the fields. Water the fields and the towns, and the lake dries up and speeds the process of total ecosystem collapse.

Climate change will continue to threaten ski resorts, the ski industry as a whole, and the mountain communities that rely on this ski tourism. Skiing in Utah alone garners over a billion dollars a year which is a huge amount of revenue for the state, not to mention the priceless value of recreating at one of the most popular ski resorts in the country. “Ski Utah recognizes the importance of protecting its greatest asset, The Greatest Snow on Earth, and water is a big part of that,” explained Ski Utah’s Director of Communications, Alison Palmintere. “Moreover, we're proud that the Utah state legislature recognizes the changes in The Great Salt Lake as a bipartisan issue and has set aside funding to study and come up with a plan.” Being aware of the issue is only half the battle, and arguably the less important half, at that. Putting such plans into place is obviously more important, but also much more difficult.

We are fast approaching a crossroads. How quickly are we willing to enact important changes, and which changes are we actually willing to make? Or will we continue with the status quo, taking climate change and its impacts in stride, watching our ski resorts and all their benefits dwindle?

“Water in the west is a super tricky subject and we'll be seeing a big correction within our lifetime,” Smith said. As the saying goes, wars in the West are fought with water, not guns. The battle to save both the planet and skiing soldiers on.