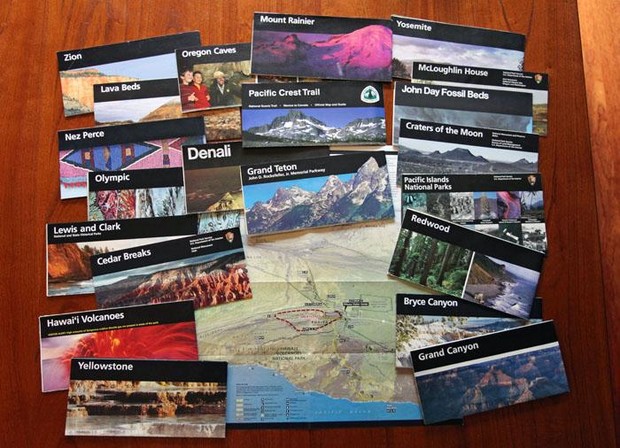 Maps from all 59 parks are available on Holly's website. Scott Johnson photo via National Parks Traveler.

If you’re planning a trip in any National Park, you’re probably going to want to bookmark this. It’s your first souvenir of every visit to a National Park: you pull up to the entrance booth, and a National Park Service ranger greets you and hands over the park’s newsletter and a map. The map’s familiar black stripe with the park’s name across it in white type and iconic photo entice you to unfold it, unveiling the adventures within, ready to be had.

“There’s a sense of pride and ownership that goes with the map the ranger hands over,” National Park ranger Matt Holly told National Parks Traveler. The maps got their iconic look from acclaimed designer Massimo Vignelli, who is probably best known for designing New York’s subway signage and the modern subway map.

During the federal government shutdown of October 2013, Holly put his time to good use: he created a site containing every National Park Service map out there—organized, easily accessible, and available for your use for free.

As told to backpackers.com, during the shutdown, Holly couldn’t work, couldn’t recreate in the park, and couldn’t travel, so he needed something to keep himself busy.

A LABOR OF LOVE

Grand Teton National Park has the most maps, currently, at 38. NPS photo.

It’s been a labor of love—Holly has added over a thousand maps to the site, available for you to view, save, and download. Holly makes the maps more viewer-friendly, too—removing excess text, improving image quality, and creating thumbnails and descriptions of every map. In addition to the maps, he links to nearby parks to help with trip planning.

Beyond the full park maps, the site features detailed maps of specific components of the parks—hiking trails and campgrounds, or a broader view of the area surrounding a park. Some of the more interesting maps illustrate the underground network of passages and tunnels at Jewel Cave National Monument, or the depth of Crater Lake.

Nothing compares to unfolding the map, spreading it out on the table, and plotting your day’s adventure.

So far, Holly’s site features 91 of over 400 Park Service units—and beyond that, there’s Forest Service, Fish and Wildlife Service, BLM lands… looks like Holly has his work cut out for him.

Holly has some words about physical maps — something that you should definitely take with you as you head into the parks, out of cell range. “Even though electronic maps are useful and convenient, I think there will always be a place for physical copies,” he said. “Nothing compares to unfolding the map, spreading it out on the table, and plotting your day’s adventure.”

Wow… This is amazing. It is often difficult to get the maps of these national parks both online or offline. I thank whoever that has worked behind this and what they have created is something amazing. A lot of people are going to get the benefit of this.
catalina island inn

Nelson went missing just below the summit after skiing off the top on September 26. Separately on Monday, a large avalanche killed a climber and buried scores of others between camp three and four at around 7,450 meters. Three helicopters were mobilized to assist in rescue operations on the mountain. Nelson was one of the most prolific ski mountaineers of her generation, with over 40 expeditions and dozens of first descents including the first ski descent of Lhotse in 2018 and several other

Yet another mountainside in the Alps has collapsed this summer due to extreme heat waves. This time, a massive rockfall above the Brenva Glacier on Mont Blanc destroyed the Bivouac de la Fourche, a tiny mountain refuge that granted climbers access to the wild side of the Alps’ tallest peak. TGR athletes Jeremy Jones and Xavier De Le Rue stayed at the refuge while filming for as they attempted to ride the North Face of the Aiguille Blanche de Peuterey. The mountains around Mont Blanc have