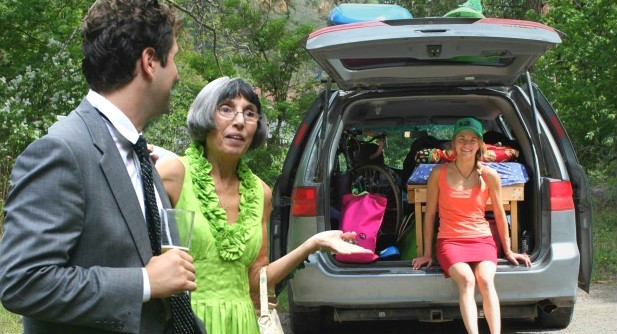 Daisy Alistair rocks the #Vanlife as her parents look on in confusion and dismay. Brooke Hess/Quinn Dombrowski photo

GREENWICH, Conn. — Complaining loudly at a GOP fundraiser Thursday that she’d wasted hundreds of thousands of dollars on her daughter’s Ivy League education, WASPy mother Regina Alistair, 53, declared that she was “not at all pleased with this vanlife shit.”

The uproar came after her daughter, 24-year-old Daisy Alistair, confirmed via Instagram that despite earning her highly expensive M.A. from Yale, she was “stoked to be homeless, unemployed, and living in a van down by the river! #Vanlife #BrokeAF #Blessed #Whiteprivilege.”

Shocked at the level to which things had gone wrong, the WASPy Mom struggled to understand why her daughter wasn't interested in pursuing a career in finance or political consulting, but instead seemed content to live in incredibly beautiful places and develop into a happy, well-rounded human being.

According to her Instagram handle, @Vantastic, Daisy spent the entire winter in Jackson Hole where she subsisted on foraged ski-lodge food, hustled for couch space, and only accepted temp work that could be immediately abandoned to go skiing at a moment’s notice.

Currently spending her offseason kayaking the Grand Canyon, Daisy reached out to TGR via satellite phone mid-trip to address her mother’s disappointment, but also made clear that she has no intention of going back to a “normal life,” and instead plans to double-down on her #vanlifestyle.

“Recently I met someone, he was homeless too — so we had a lot in common,” Daisy said. “We moved in together, well, he and his three dogs moved into my van, but whatever ... I really think we have a bright future together!”

Glad you liked that Dunfee