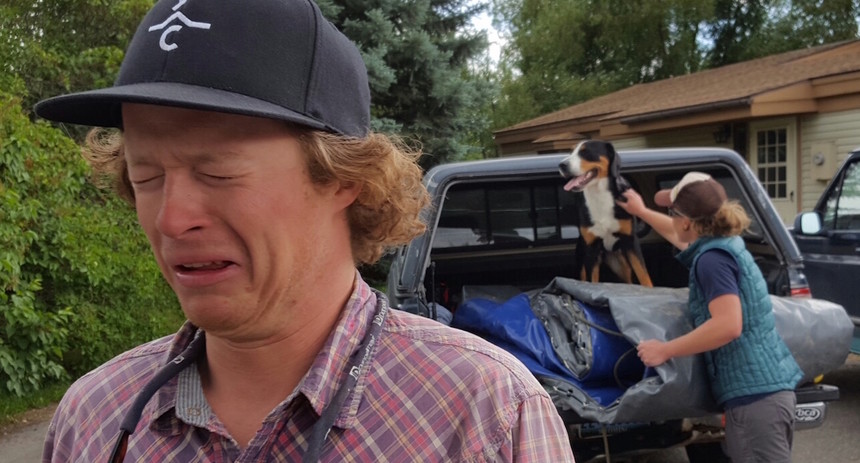 As part of the ruling, river rat  Sam Rooney, 29, was ordered to surrender the boat and beast to ex-girlfriend Monica Lily, 27, by the end of the month. Despite getting the dog together, Lily was granted full custody of Piper, while Rooney was ordered to pay monthly puppy support.

According to close friends of the estranged couple, Rooney and Lily were “hot and heavy” for just over four months, which on the dirtbag relationship metric scale (DRMS) equates to about 3 1/2 years in normal communities where adults act like adults.

Witnesses at the trial described a passionate and emotional defense that saw an overcome Rooney begging the jury not to take his dog and boat away.

“At least not during high water!” he sobbed passionately to the unsympathetic jury.

The ill-fated bro is reported to be working four jobs and over 16 hours a day to pay doggy support.

In his defense, Rooney’s legal team cited long back rubs and that their client had provided Lily with a National Park pass and a sick Jetboil camp stove as reasons he was actually supporting a more equitable relationship.

In a written statement to The Bumion, Lily conveyed regret, but also mentioned that she’s been making great use of the 14-foot-raft with her new/old boyfriend, Chad, who she was incidentally dating immediately before Rooney.

“Having Sam’s raft has really brought me and Chad back together,” her statement reads. “We get on the river almost every evening and bring Piper along most of the time — she barely misses Sam at all.”

Rooney’s legal team plans to appeal and fight for joint custody of Piper, but as of press time, the ill-fated bro is reported to be working four jobs and over 16 hours a day to pay doggy support, and get a new inflatable "hopefully by next summer."