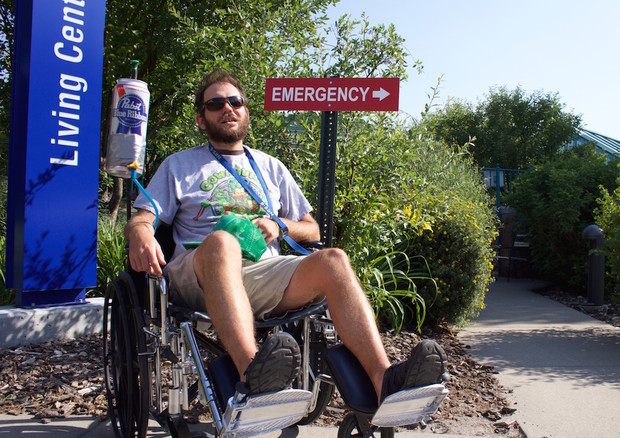 Peter Pan Syndrome sufferer Yale Brown, 31, wheels himself around St. John's Hospital while slowly regaining memories from the prior 12 years of his life. Sam Morse photo.

SKI TOWN, USA — A new study commissioned by the Centers for Disease Control and Prevention indicates that Peter Pan Syndrome, the condition best known for afflicting 20-to 40-year-old males in American ski towns, is becoming exponentially more common. The landmark study, published Thursday in the medical journal Clinical Dirtbaggery, suggests that the coming-of-age of millennials, coupled with the onset of the Great Recession, has provided the perfect storm for young people in mountain towns to reportedly “not give a fuck.”

The study also finds that Peter Pan Syndrome (PPS) closely corresponds to activities such as drinking, smoking weed, ripping pow, traveling, having a dog, as well as being on a river for any significant amount of time.

Numerous test subjects were part of the study, but CDC doctors indicated the most profound and disturbing case was that of Jackson Hole resident Yale Brown, 31, who, according to his attending physicians was “the worst case we’ve ever seen.”

“Oh. My. God. We had to rewrite the book when we found that guy,” St. John’s PPS specialist Greg Masters told TGR via Skype, detailing Brown’s deteriorating condition. “He needed to get hooked up to a PBR IV immediately. I’ve never seen anything like it. His roommates brought him in. They said they were worried because he was sleeping past noon every day of the week, only seemed interested in temp work and was irritable every day he failed to get on the river.”

when TGR reached out to Brown — now recovering in a grad program in Denver — he seemed relieved, rested and refreshed. But he was still apprehensive about leaving behind all the good times of his youth.

“I don’t know what happened. The last thing I remember, I was a bright-eyed, bushy tailed 18-year-old checking into the dorms at Fort Lewis College in Durango. Next thing I know, I’m waking up as a hairy 31-year-old smelling like stale beer and neoprene. My joints ache and I can’t remember anything. What the fuck happened?”

Study authors touched on possible causes for the affliction, but also indicated that the onset of PPS may be closely related to FOMO, which appears to largely affect the same young demographic.

FOMO seems to be a symptom of the FML disease which has been seen going one of two ways; full blown PPS or the dreaded mental disorder YOLO.