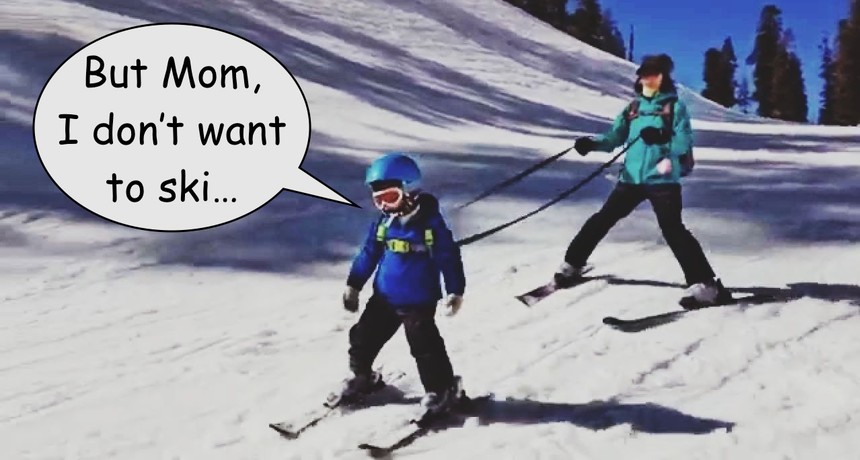 Little Billy learns how to ski–and doubt his worth as a developing human being. Creative Commons mashup.

MOUNTAIN TOWN, USA — A 10-year-old’s psyche slowly crumbled Friday as his mother forced him into a leash to learn the basic fundamentals of downhill skiing. Both juice boxes and fruit roll-ups were reportedly used to coerce the child into submission.

Saying it’s “for his own good” and that “he’ll thank me someday,” grom mom Alicia Winston maintained that despite her child’s whimpers, cries, and loud, wailing sobs, her son will eventually benefit from donning the leash like an animal and having his will crushed.

Eyewitnesses confirmed that the scene was horrific. Local skier Jenny Ripstone told TGR that she felt bad for the little buddy, and hopes that someday he’ll get to learn how to ski on his own terms.

“That mom was just screaming commands like her kid was some sort of pack animal,” Ripstone remembered, horror still refracting across her face. “She kept playing up gender roles and every time the boy started crying she’d tell him to ‘man up’ and ‘act like a big boy,’ I’m no psychiatrist, but that kid’s gonna have serious mommy issues!”

Sure, I learned pizza and french fries, but I also learned that, despite my desires, my parents’ idea of who I should be is more important to them than my own.

Former TGR Grom Contest winner Shreddy McShredface told TGR in an emotional, groundbreaking interview that he too was once forced into a leash, and despite learning to ski, the negative psychological consequences weren’t worth the payoff.

“Sure, I learned pizza and french fries,” McShredface told TGR in between sobs, “but I also learned that, despite my desires, my parents’ idea of who I should be is more important to them than my own. Now, all I’ve got is skiing. I can’t hold a job, I live in a van and I’m beginning to show early onset symptoms for PPS...”

As of press time, reports confirmed that Winston’s son is still in recovery from the emotional hardship of donning the leash. But in an emailed statement, the mother refused to acknowledge her son’s psychiatric trauma, and said that “little Billy is doing great and is stoked for his next lesson–in the leash.”