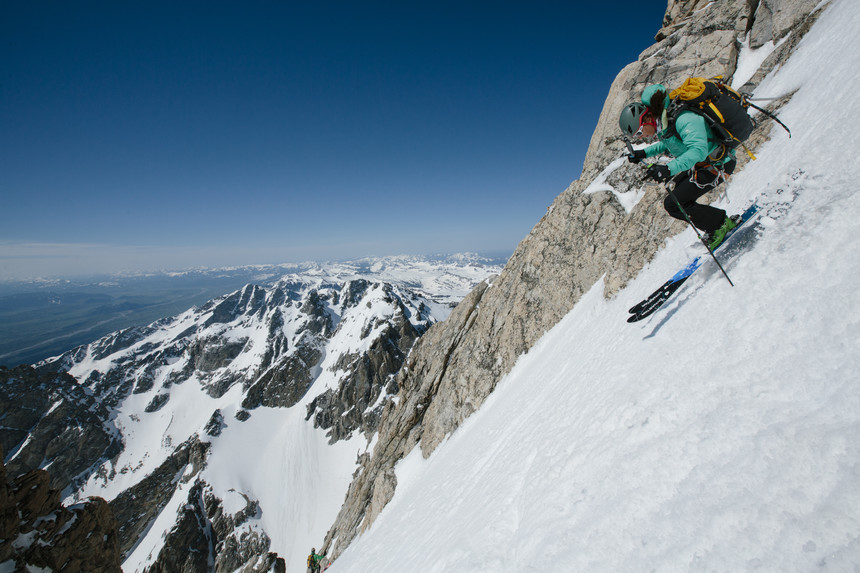 She has one of the most impressive ski mountaineering resumes of anyone on the planet, male or female, although DesLauriers humbly describes her life as "doing what I love within my limits."

When I caught up with DesLauriers she had just returned to her home in the Tetons after a four-week trip to Japan.

"I'd never been before," she gushed, bubbling with excitement. For someone who's travelled to some of the furthest corners of the Earth with her skis on, it's refreshing to still see such giddy enthusiasm for each new adventure.

I ask her about her introduction to skiing.

"That'll be quick" she laughed. "We didn't really ski."

Growing up surrounded by farmlands in New England, Nordic skiing was the only type of skiing DesLauriers knew. "I would just love to go out there and walk around in the woods in the winter. I immediately fell in love with the peacefulness."

Her family relocated to Arizona when she was 14, and DesLauriers got her first taste of alpine skiing at Telluride. She was hooked immediately, and promised herself that the minute she graduated from college she'd move to a ski town.

Where it All Began

DesLauriers got her degree in French and environmental politics at the University of Arizona in Tucson. Throughout her college career she worked and went to class Tuesday through Thursday, then drove 12 hours through the night to Telluride. On a fall semester abroad, DesLauriers became enthralled by the lifestyle she discovered while hitchhiking through Chamonix and Verbier. "It was an important realization" she remembers, "that I could just go anywhere and do anything if I really wanted." It was there that a friend gave her a pair of climbing skins, and she discovered the magic of skiing uphill.

After graduating, DesLauriers did exactly what she'd resolved to do at the age of 14: She moved to a small cabin in Ophir, Colorado and started her new life in the mountains. 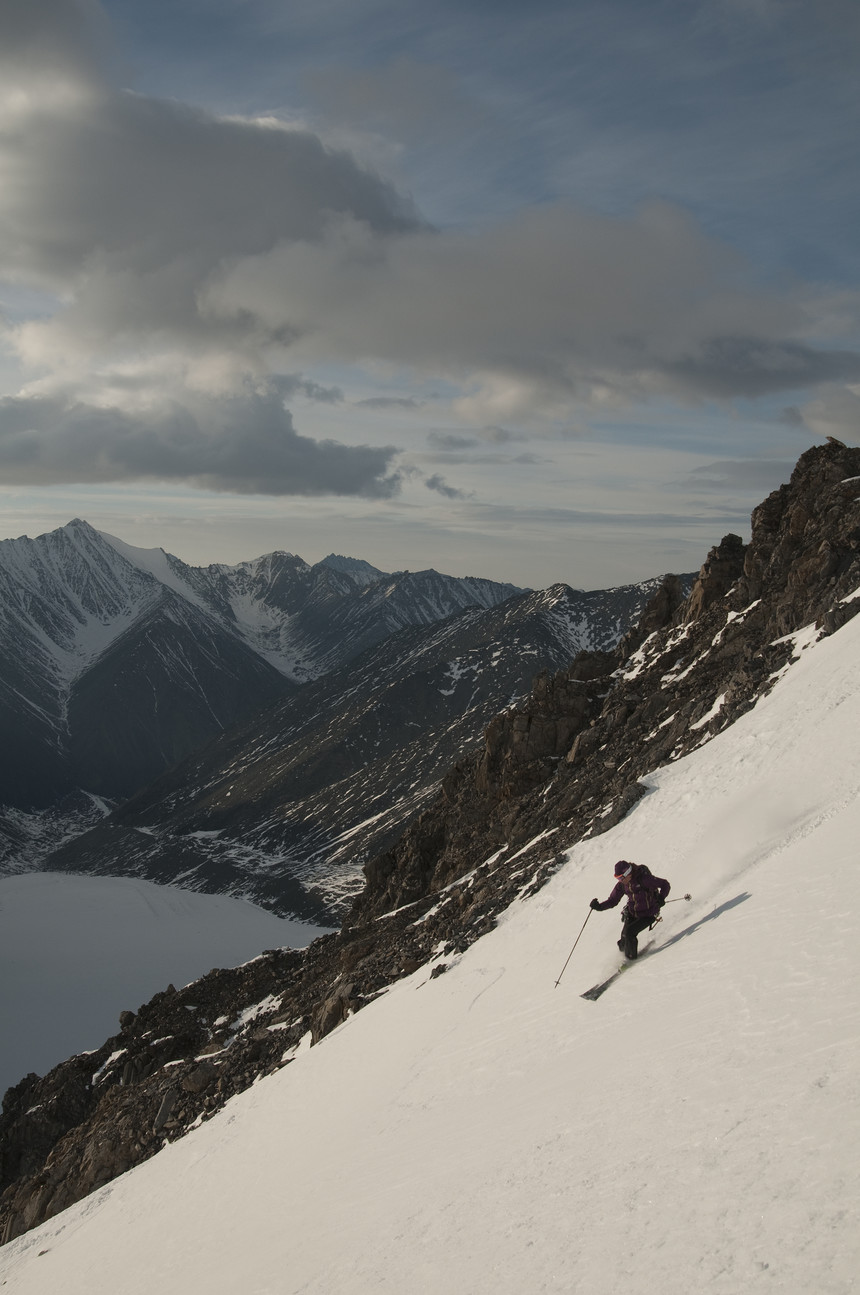 "I saw ski patrollers and said ‘Hey, they're getting paid to do that. I can do that too.’" So she started patrolling at Telluride and volunteered with search and rescue. She also developed strong rock climbing skills that would serve her well in the next decade.

Not one to take the conventional road, DesLauriers spent her 20s raising a wolf pup named Alta. She brought him home right before moving to Telluride after she finished college. In her book, Higher Love, DesLauriers describes how the experience truly shaped who she became as a person.

After almost 10 years in Telluride, she moved to Jackson, Wyoming and turned her sights to freeskiing. Stimulated by the technical lines and bounty of inbounds features at Jackson Hole Mountain Resort, DesLauriers started skiing in a way that she felt was more freeing and expressive.

To prepare, DesLauriers would rip 4,000-foot tram laps bell-to-bell, even when bulletproof conditions cleared the mountain of all but a few brave skiers. "I had my set of features I would have to hit and I would visualize that there were judges all over the mountain watching me,” DesLauriers told TGR. “I skied 4,000 feet like I was in a competition over and over until it was time to go home."

It takes all but a few minutes with DesLauriers to understand how incredibly motivated she is— DesLauriers sets out to do something and she goes all in. She doesn't shy away from a challenge, and she isn't about to half-ass anything.

"I like to be good at what I do," she told TGR confidently. That’s a bit of an understatement.

DesLauriers remembers getting ready to ski her run in Kirkwood at one of the final events of the FWT in 2004. "I knew I was going to Denali in a few weeks and didn't know if I should hold back a bit. I was really torn because I didn't want to give up on this, but I also didn't want to ruin my trip."

The result was sending a gnarly line, winning the tour, and becoming the first American female to ski Denali just a few weeks later. It worked out, but after her second FWT championship in 2005 she felt that the time and energy she had put into competing was drawing away from ski mountaineering. She was ready for a change.

During the 2005 tour, DesLauriers and her husband Rob had dinner with Dick Bass while visiting Snowbird. That was where the Seven Summit wheels started to turn in her head. When she checked out from the Cliff Lodge the next day, Bass had left her a signed copy of his book, Seven Summits. A year-and-a-half later, she dropped in at 29,035 feet and made history.

It wasn't an easy road. She battled unfathomably cold conditions in Antarctica, clung for dear life on the 45-degree blue ice of the Lhotse Face, and spent almost two years up to her neck in travel and trip planning to reach the highest point on each continent.

DesLauriers says the mentality she developed in from competing became invaluable in her pursuit to ski the Seven Summits. It takes patience, perseverance, and an extraordinary amount of bravery.

"When I'm scared I make a plan," she told TGR plainly. "We dropped into the Rescue Gully on Denali really late on our summit day in 2004. It was steep, bulletproof ice and the first time I'd ever skied down with an ice axe in my uphill hand. Visualizing an entire line can be daunting from the top, so I made a plan in small, achievable increments and worked my way down turn by turn. The beauty of something like that is that there's really very little in my head—I'm so focused that I'm not focused at all."

When DesLauriers returned to the States after her completion of the Seven Summits, everyone wanted to know what's next? "I told them, can I just sit with this one for a minute?" she laughed. "I felt like I'd earned a break."

Deep down, DesLauriers knew what was next but she wasn't quite ready to share it publicly. When they arrived at Everest Base Camp before the climb, DesLauriers and Rob had decided to take a step in an entirely new direction. "I said ‘Rob, if we get off this mountain alive I would like to start a family.’"

"Facing my own impermanence so intensely made things really clear," she said. "It was something I'd always wanted to do, but hadn't felt it was the right time."

Now eight and 10, the DesLauriers kids have already trekked to Everest Base Camp, skied deep powder in Japan, and begun to explore the backcountry in their home in the Tetons. "We're trying to let them do whatever makes them happy, but they've definitely got the bug for skiing." 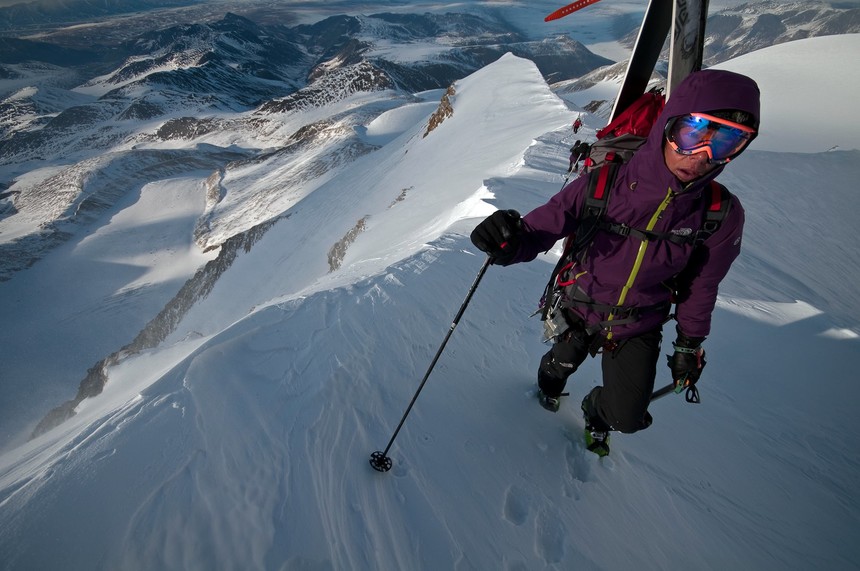 After a short hiatus from big expeditions, DesLauriers turned her sights to the Arctic National Wildlife Refuge. With two young kids at home, she was looking to achieve that feeling of being deep in the remote and peaceful wild, without the time commitment of a Himalayan expedition. The Brooks Range in Alaska was somewhere DesLauriers had always had on her radar—pristine, untouched, chock full of first descents.

So in 2010, DesLauriers led a North Face team of four women and two photographers to climb and ski some firsts in the region. They accomplished the first descent of Mount Isto, a new route down Mount Michelson, and an unnamed peak at the time–Mount Okpilak–the fifth highest.

On her third trip up to the Arctic Refuge, DesLauriers met Dr. Matt Nolan, PhD, a glaciologist from Fairbanks running a research station on the McCall Glacier. He had been out there for over ten years and was intrigued by the terrain that skiers could access. 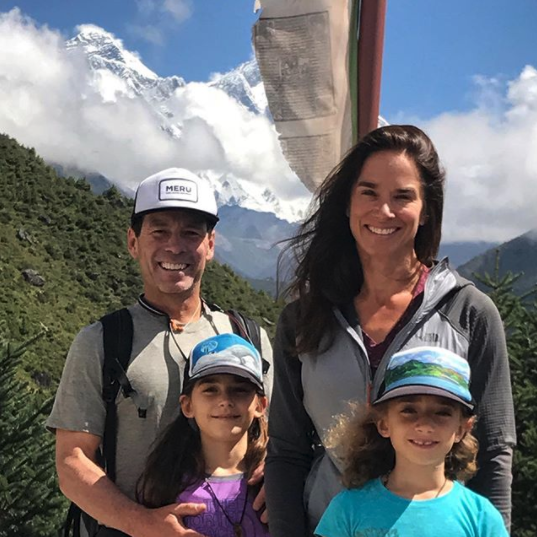 DesLauriers and her family during her children's first trip to Nepal, with Everest in the background. Kit DesLauriers photo.

An ecologist at heart, DesLauriers jumped at the chance to collaborate with Dr. Nolan. Using her mountaineering skills, DesLauriers climbed and skied all over the Brooks Range to help him prove the accuracy of a new and less expensive way to map the topography. This enabled them to settle the debate over the true highest peaks in the range, as well as mapping glacial recession. DesLauriers co-authored a scientific paper with Dr. Nolan stating their findings, a feat which earned her an Adventurer of the Year award from National Geographic in 2015.

Her laundry list of accomplishments is jaw-dropping. But DesLauriers is mum on what’s next.

"What I do, I do for myself" she explained. "I'm happy to share my story, but I'm not going to share what I'm going to do next. Anytime I've ever publicly shared what my next goals are I've either lost my mojo, not actually done it, or been unsuccessful."

She also admitted that travelling the world for her own skiing pursuits can feel self-centered at times.

"It can feel like a pretty selfish pursuit" she reflects. "I've thought a lot about it and struggled with it a bit. But I've realized that if you can inspire people, if you can inspire them to look beyond the boundaries of what's possible, then that can be a huge gift and I'm proud to be able to share that."

Wow, this is a really awesome experience, I have been a long time dreamer for such awesome skiing, but I am not able to achieve it.

This is really one in a life time experience. Actually there’s a friend of mine who visit us the other day. he is planning to invite me similar to the one stated above. Hope I can make it!

As you realize that when we move in this kind of spots then we pick the all riggings for it. The economic-niagara make a total rundown which you can see and purchase on the off chance that you go the first time.