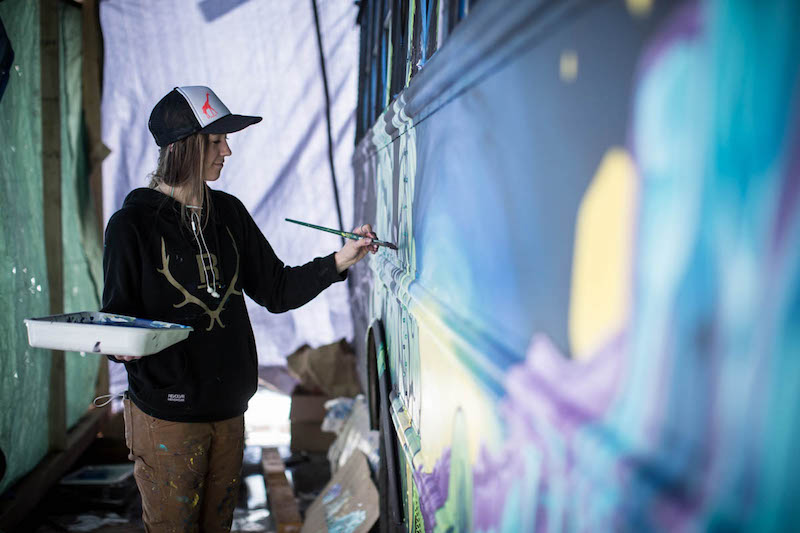 Gianna Andrews anxiously waited for the results of her CATSCAN at the ER in Bozeman, Montana. Flooded with pain and nervous to find out if she'd need surgery, she couldn't push the thought from her mind: What's going to happen to me now?

Just after returning from a NOLS course in Nepal in 2015, Andrews had a terrible mountain biking accident in Big Sky. She went over the handlebars, knocked out her front teeth and broke her back. Completely incapacitated for months, the mountains that she held so dear were ripped away from her and replaced with long days inside with nothing to pass the time.

"What am I going to do now?" Andrews remembers asking her friend Rachel in the waiting room of the ER.

"You're just going to paint," her friend responded. "You'll see."

Andrews flew home to stay with her parents in Washington State during her recovery and slowly begun to spend day and night at the easel, trying to escape the dreary idleness that would be her life for the foreseeable future. Andrews has come a long way from the ER in Bozeman back in 2015. Gianna Andrews photo.

What started as a way to stave off boredom has now turned into a profession and a huge part of who Andrews considers herself as a person. Almost three years later, Andrews now runs her own art business out of her home in Port Angeles, Washington, painting the mountains she dreamt about while she patiently waited for her body to recover.

We caught up with her about her newfound career.

TGR: Where did you first learn to paint?

Gianna Andrews: I was raised in a creative household, growing up my mom and I would do arts and crafts days, but I never really thought of myself as an artist. I took a few classes in high school but never really had confidence with it or gave it the time it needed.

That's one thing I learned when I really started to paint—art takes time, it doesn't just happen overnight. I never really gave it the time it deserved until I actually didn't have anything else that I could do.

How did painting help you through the months after your accident?

GA: When I started painting during my recovery, I wanted to paint the places that make me feel free. 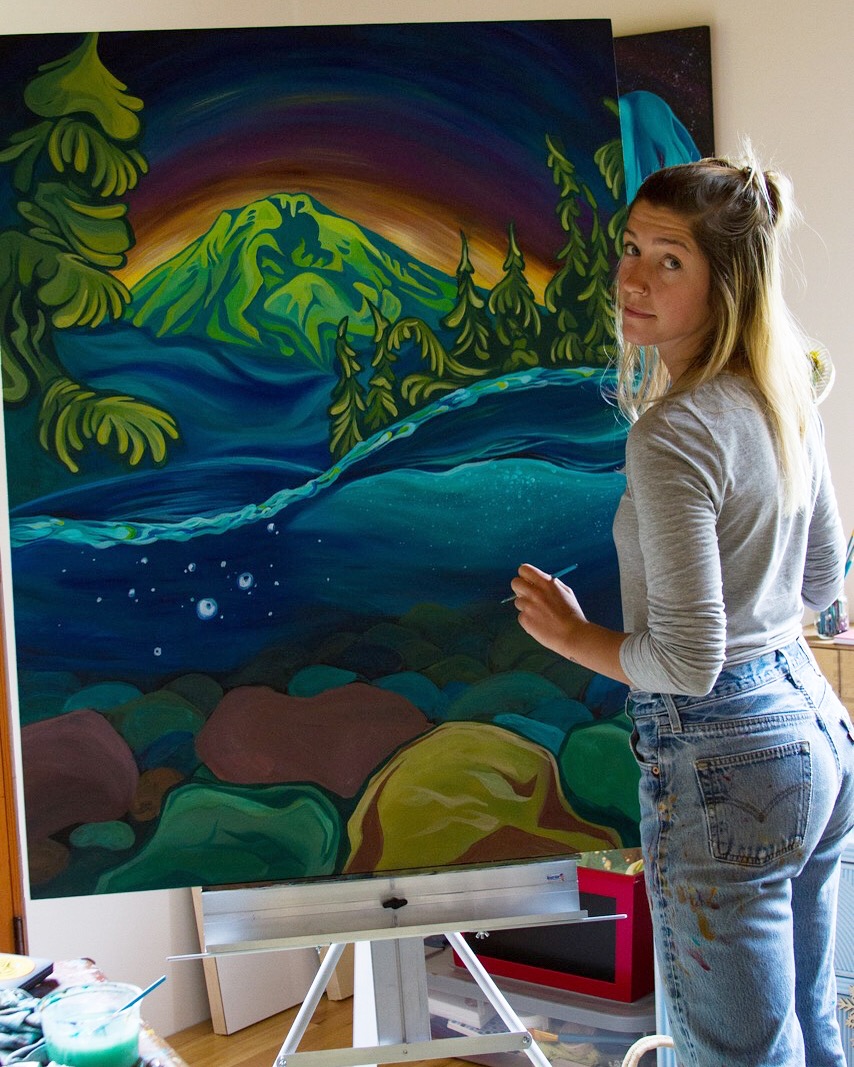 Andrews says her newfound art career has helped her reclaim some of the landscapes she lost access to her post-injury. Marc Napoli photo.

When you're skiing, biking, climbing or whatever you're doing outside you're fully in the moment, responding to the elements and taking it all in. That's what I love about it so much and what I would miss the most. Being able to paint those pictures let me go back to the places that I love even when I couldn't. It was a way for me to put myself back into the mountains.

Were you able to make a full recovery?

GA: Yep, I've pretty much made a full recovery and am slowly getting back to doing the things I love. My back still bothers me now and then, but I'm able to bike, ski, climb, and I'm actually learning to surf now which was something I'd never thought I'd do.

I was really lucky, though. The broken vertebrae was, like, millimeters away from my spinal cord so that could have been a really different story.

Tell us about what inspires your art. 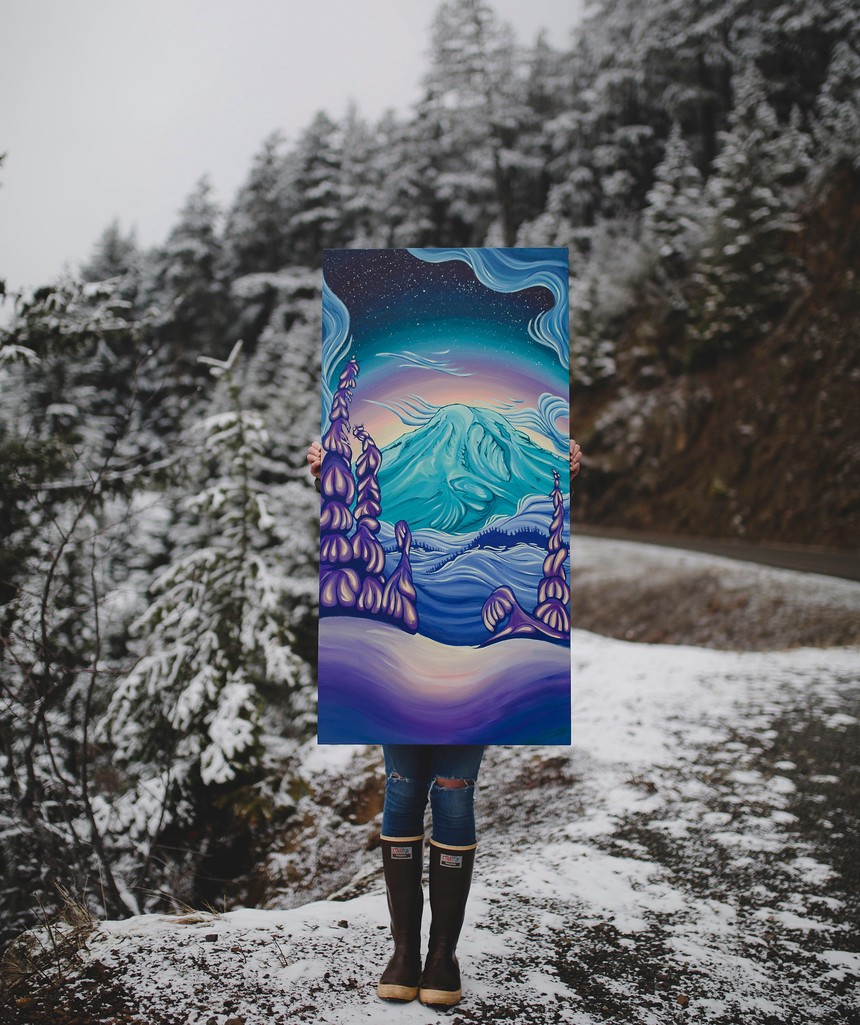 I really like to incorporate the theme of twilight in most paintings. You'll see a lot of stars in the upper sky and you can't really tell if it's sunset or sunrise. I like that transition time—the early morning or early night where the colors are more vibrant. Those are definitely the most memorable moments to me.

I also do some with what I call a "GoPro-esque horizon." It lets me create a wider lens and show more of the landscape. It also puts you in the painting because it's like a picture you might take yourself.

You did an astounding job of finding the positivity in a really tough situation, what would you say to someone going through a long recovery or season-ending injury?

GA: It's really easy to immediately just feel left out, scrolling through your Instagram feed seeing your friends skiing lines, biking, or surfing. But the mountains aren't going anywhere. Life is so fast paced that it forces you to relax a little bit. Maybe it's a greater sign that it's time to decompress and take a step back.

With down time you really start to discover things about yourself you never stopped to think about. It became a really introspective time and I tried to embrace that. It's nice to have something to channel your energy into and for me that became painting. When I had finally recovered I came out of my injury with a clear vision of my life as an artist.

After you recovered and started get back to skiing and biking, do you feel like it's changed your relationship with the mountains?

GA: Art has definitely made me more thankful just to be alive and be outside.

There's sort of this imperialistic way of looking at the outdoors like it's something to gain or conquer—we're all guilty of it at some point. Now when I go ski touring I feel much more inclined to look around and be more appreciative of everything around me instead of just rushing through it. It's taught me to slow down and be patient with myself and that's something I really value.

We are Like Waves by Jordyn Romero: A Film to…

SKI LIKE A GIRL: A COMMUNITY BASED BRAND WITH GIRL…

John Collinson has made this kind of turn in the Wasatch over and over again - but are we coming to a point where the future of skiing in Utah is at risk? | Jeff Cricco/TGR photo. Imagine this: you sit in immovable traffic, waiting to go skiing. You sip your cooling coffee, take a bite of your local on-the-way coffee shop burrito, and curse both the snow and the traffic gods for not blessing you with either plentiful snow or clear passage. Your car idles as you turn up the radio and

, a documentary by Jordyn Romero that's out now, follows the story of Sanu Sandeepani, one of the first local, female surfers from Sri Lanka. On the south coast of Sri Lanka, surfing is everywhere, yet local girls are discouraged from participating in the sport. Instead, they’re expected to stay home and concentrate on housework, getting married and caring for children. Sanu is challenging the strict gender roles of her village and dreams of becoming the first woman surf instructor in her