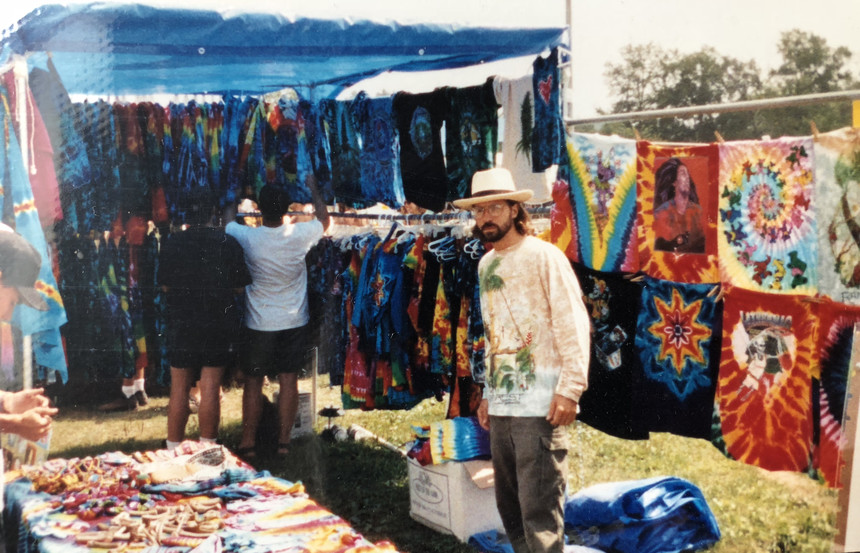 Designer and artist Peter Forsythe carved out a unique niche in the rock and roll industry, designing t-shirts for some of the most prolific bands. Peter Forsythe photo.

We’ve all been asked this same question: What do you want to be when you grow up? For Peter Forsythe, the answer came to him at his first Grateful Dead show in 1981. The music, the culture, and community fascinated him, and more importantly, as a fledgling artist, he saw other artists making a living by selling their artwork on t-shirts at the shows. It planted the seed in his brain that he could make his own. With no formal training in silk screening or graphic design, Forsythe started cranking out t-shirts in his basement and sold them to high school classmates. By the time he was in college studying printmaking at SUNY New Paltz, his printing process was dialed and he was churning out all kinds of custom Grateful Dead apparel.

One of those t-shirts was Forsythe’s big break. He was wearing it while walking down the main street of New Paltz, New York, and out of nowhere, a voice called to him. It was the owner of a local Grateful Dead clothing shop, and he really liked Forsythe’s design. As luck would have it that shop owner also happened to be the main producer of Grateful Dead shirts for their tours. When he learned that Forsythe was the designer, he offered Forsythe a job on the spot. The rest is history. For the next decade, Forsythe made artwork for the Dead nonstop up until 1995, the year Jerry died. Following Jerry’s death, Forsythe launched his own business and successfully carved out a unique niche in the rock & roll space by working with not just the Dead, but a few other bands you’re probably familiar with: ACDC, Pink Floyd, Bob Dylan, and many, many more.

With over 30 years of design experience with the Grateful Dead, it only felt appropriate for TGR to work with such a legendary artist in the music industry for our next round of t-shirts. In his latest apparel collaboration with TGR, Forsythe combined his iconic intricate hand-drawn style with the mountain culture of Jackson Hole, Wyoming, and you’re going to love what he came up with. 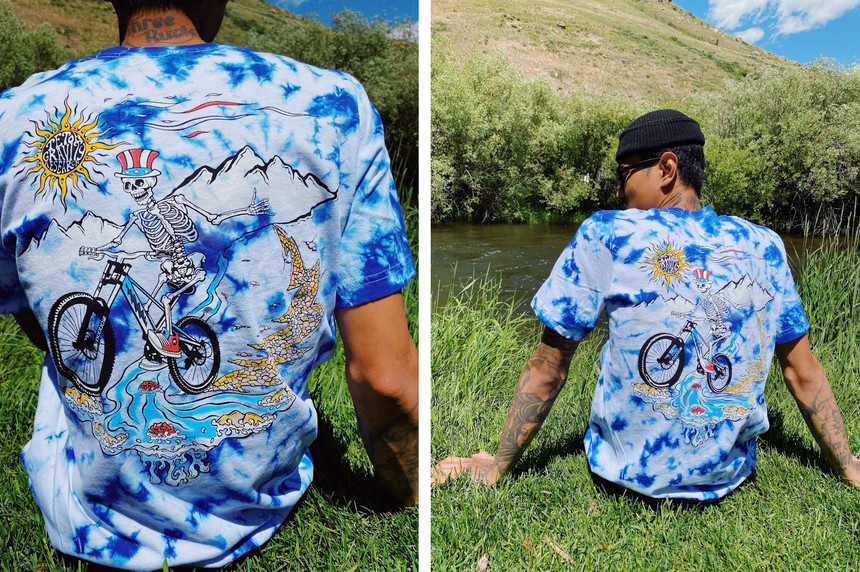 Introducing the new Uncle Sam 4th of July Collab with Peter Forsythe. Find yours at shop.tetongravity.com

We sat down with Forsythe to learn more about his career and the inspiration behind the TGR collaboration.

Where did this love of music stem from?

PF: When I was a kid, I always just wanted to be a Grateful Dead artist. I think I started drawing in the late seventies. I had no idea how to silkscreen, so I just created my own system of doing things in my basement. I was a kid and just figured it out. In high school, I was already selling t-shirts, and my parents thought I was crazy. I would always tell my parents, “someday, I'm going to be a Grateful Dead Artist” and they’d just laugh and say “sure, sure.” But here I am now.

I mean, looking back, does it feel surreal to have achieved that goal?

PF: It worked out. It hasn't always been great, because the life of an artist is constantly up and down. It's not a get rich quick thing for sure, but it’s pretty satisfying. I've seen a lot of things. I've met a lot of rock stars. I've hung out at some pretty cool shows. It's been a pretty interesting life.

Bill Walton even has a few of Forsythe's designs from over the years.

It sounds like your passion really opened some doors for you. What other bands have you designed for over the years?

PF: I’ve made designs for a variety of other bands: The Allman Brothers, Bob Dylan, The Rolling Stones, ACDC, The Black Crows, Levon Helm and The Band, Blues Traveler, and Pink Floyd. I've also done a few cool projects like a t-shirt design for the Lithuania Olympic Basketball Team.

What about the Grateful Dead resonates with you so much?

PF: These shows felt like a giant family reunion. When I was a kid, I was fascinated. For most concerts, you go there, and you gotta find parking. You pay 30 bucks to the parking attendant and go to the show. After the show, you go home. At a Grateful Dead show, you get there in the morning, find the best spot in the parking lot, set up your booth. Everybody else is doing it. All of a sudden, it's like, it's an all-day kind of flea market where everybody's selling things they made. I was like, wow, this is a real event. This isn't just like a concert that you just go and try to avoid everybody and you don't really talk to too many people. It's not just a nighttime event. It's like an entire day, and that day turned into weeks and months and years.

It eventually turned into: this is just how I want my life to be. I make my art. I see my friends. I travel around. These shows weren’t really a concert for me at that point. It was just life. 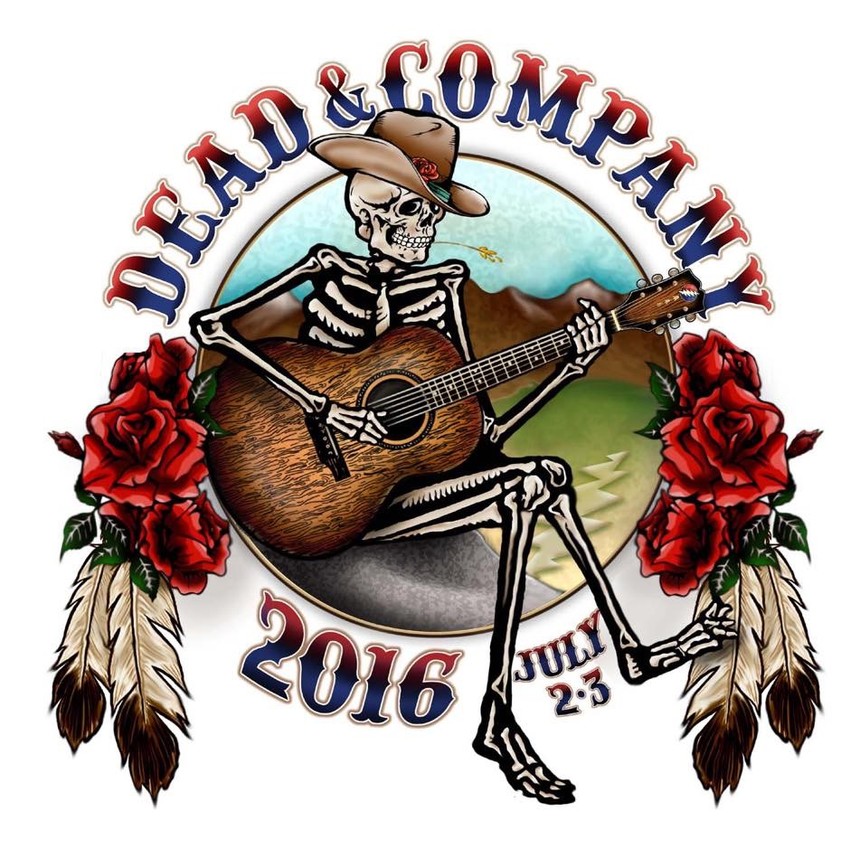 One iconic part about Forsythe's work is the incredible level of detail he brings to his designs. Peter Forsythe design.

When it comes to your work there’s an incredible level of detail to it. What inspires this intricate style of artwork?

PF: I’m just a really detailed person. I'm not like a loose kind of artist, you know? I mean, originally I wanted to be edgy and rough, but I couldn’t help but be detailed, which turned out to be a style. For most of my pieces, I start by working with a couple of shapes and then build from there. I’ve found if I start with no idea, I tend to work faster than if I came into a project with an idea.

When did you start incorporating tie-dye into your work?

PF: The tie-dye really helps the overall design in most cases. For me, the artwork is only a part of the t-shirt, and the tie-dye helps kind of create a scene. It kind of gives the artwork a place to live, rather than just floating on a shirt., It makes the whole thing more interesting. I usually layout like a pattern of what my borders will be. A lot of shirts I design are the African pattern, which is that V pattern. So I’ll often design things that work with the tie-dye pattern, so they look cohesive.

How did you end up connecting with TGR to work on this awesome collaboration?

PF: Probably a year or so ago, I got a Facebook message from a picture of one of the first dead shirts I ever did. It was the yellow bear snowboarding. It's a real simplistic design that I think I made in 1989. I was just getting out of college and I didn't even have an art studio yet. I basically drew it at my kitchen table with like a Sharpie.

Anyways, Brian Francis, who handles all of TGR’s apparel reached out and asked “Hey, did you do this design?” And I was like, “Yeah, why do you need one.” He explained that he was looking for an old school, Dead designer, and we’ve been collaborating since.

I'm really having fun. Working with TGR is like the fast-paced days back when Jerry was alive, it was like draw t-shirt designs until you pass out. And now I feel like I'm sort of back cause Brian's brain's going 90 miles an hour. He’s always thinking about some new ideas.

Spotting fans in his t-shirts is one of his favorite perks about his job. Peter Forsythe design/photo.

What’s it like seeing your ideas out in the wild?

PF: It’s still wild to think about all the different people all over the world wearing these shirts. Friends will send me pictures when they spot my work. I’m always fascinated by the people who tattoo shirt designs on their bodies.

When my family goes on a vacation, we find shirts everywhere. It’s cool, and the kids have gotten good at spotting my work or their mom’s artwork. So between the two of us, we're always seeing stuff everywhere. That's always a cool feeling.