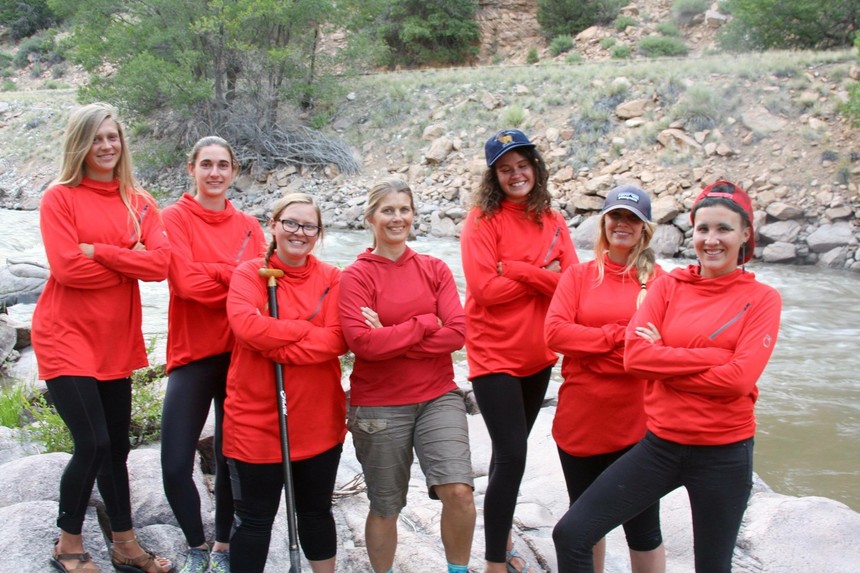 Under the tutelage of Sutton (middle), a group of six women who had never met before became the first U23 whitewater team from the United States to compete in the World Rafting Championships. Julie Sutton photo.

Texas Creek, Colorado—population 11—is far from a riveting summer home for most 20 year olds. But for serious whitewater paddlers, the region is an ultimate gateway. And this summer, Texas Creek and the idyllic rapids of the Arkansas River that run adjacent to it became the training field for six young women who vied to become the first-ever U23 (under age 23) female team from the United States to compete at the 2017 World Rafting Champs (WRC) in Japan. And, against all odds, the rag tag group–who call themselves the Salida She-Ra’s—succeeded.

Three years ago the Salida She-Ra’s Captain Hannah Walker–then 20 years old–became a river guide for Journey Quest, a wilderness and whitewater company based in the Arkansas River Valley. During the season’s peak traffic, Walker occasionally helped to guide trips for a neighboring company, Arkansas River Tours (ART)—which proved to be pivotal: Walker met ART guide Julie Sutton, a pioneer of whitewater raft racing in the U.S.

Sutton, 43, has raced whitewater for a decade, raft guided for two decades, and is a five-time WRC competitor. Yet throughout her career competing, she noticed something was lacking from the US whitewater scene.

“At Worlds, I saw other countries had introduced girls to the sport at a younger age [compared to the U.S.],” Sutton told TGR. “We need to pass down what we’ve learned to help grow the sport. When I started racing, I was almost 40 years old and most girls on the Open teams were in their twenties.”

Unfortunately, getting to the WRC start gate isn’t exactly a walk in the park. In order to consistently train, a team’s paddlers need to live in close enough proximity to the same river. And, somewhat counterintuitively, having a raft guide background isn’t correlative to competitive rafting: To work as a teammate, guides need to abandon their dominance as the lead paddler. In other words, an already slim talent field is narrowed down even further, and when considering the costs associated with traveling and competing in the WRC, creating a team can be impossible.

“Worlds is the best of the best in terms of rafting racing and the rafters,” Sutton said. “The International Rafting Federation [IRF] is trying to make raft racing an Olympic sport, but some countries don’t have funding and even outdoorsy people in the U.S. don’t know about the sport, yet.”

After the 2016 WRC in in the United Arab Emirates, Sutton and two of her teammates—Bre Rocksund and Mia Carrasco-Songer—returned to the U.S. with a mission to get more young women involved in the sport. Their biggest tool was word of mouth: they connected women who were interested in raft racing so as to establish more teams and encouraged newcomers– raft guides or not–to give the sport a shot. Carrasco-Songer—the captain of Durango, Colorado’s Animas Amazons team—and Sutton introduced two of their mentees, Teal Lehto and Walker, to create a team to compete at this year’s WRC qualifier in Oklahoma City.

Captained by Lehto, the San Juan Sirens became the first-ever women’s U23 team to race at the National Championship in May 2017, and earned their bid to compete at the 2018 WRC on the Alumine River in Argentina. Prior to the competition, the Sirens had only paddled together four times with the exception of Walker–who met them for the first time in Oklahoma.

Sutton sparked the Sirens to set their sights even higher. She proposed that they also compete at the 2017 WRC in Japan—in October. Initially, the team balked on the idea and decided to focus on the 2018 WRC. There was just one problem with that: Walker would be too old to compete in 2018.

“After Nationals, Hannah reached out and asked if it would still be possible to train a team for Japan,” said Sutton. “I said, ‘In the next week, if you can get six people in a raft and we can do a practice together, we’ll go from there.’” 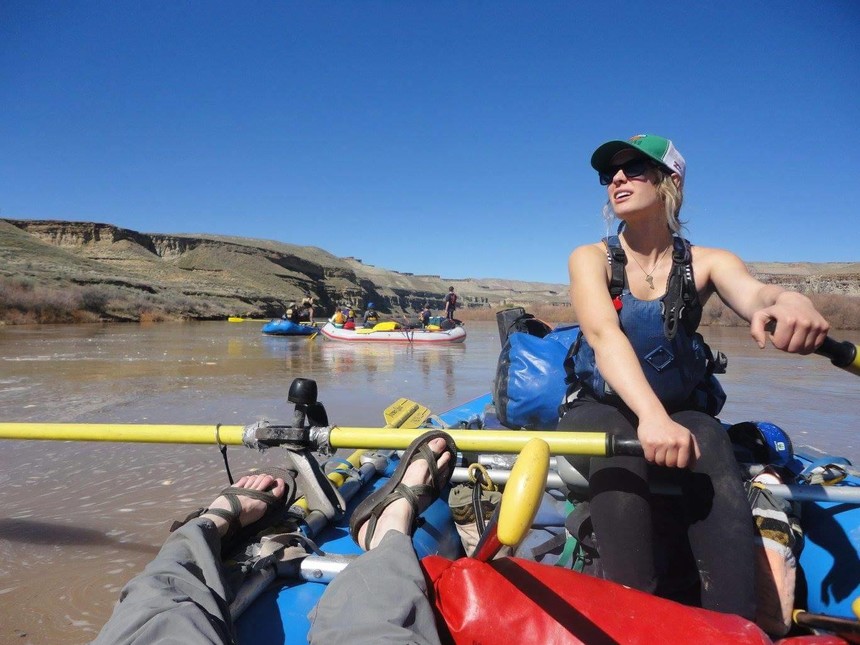 Walker (above) became the catalyst that drew the She-Ra's together. Julie Sutton photo.

“After we practiced for a couple of weeks I saw the potential of our team and knew that we were capable of competing at Worlds,” said Walker. It was July. She wrote a proposal to the United States Rafting Association to request a WRC bid for their U23 team.

“They voted unanimously for us to go,” said Walker. “You have to start somewhere. I’m so thankful we had Julie—someone who is so renowned and experienced—as a coach and mentor.”

With college classes resuming in mid-August, the six-woman squad lived and breathed whitewater everyday for two months to prepare for Worlds. Hoffman and Walker roomed together in Texas Creek, Carl lived near Buena Vista, and Price was based in Salida. House, Zipperer, and Sutton set up tents at the Itty Bitty Lakes campground near Cotopaxi. 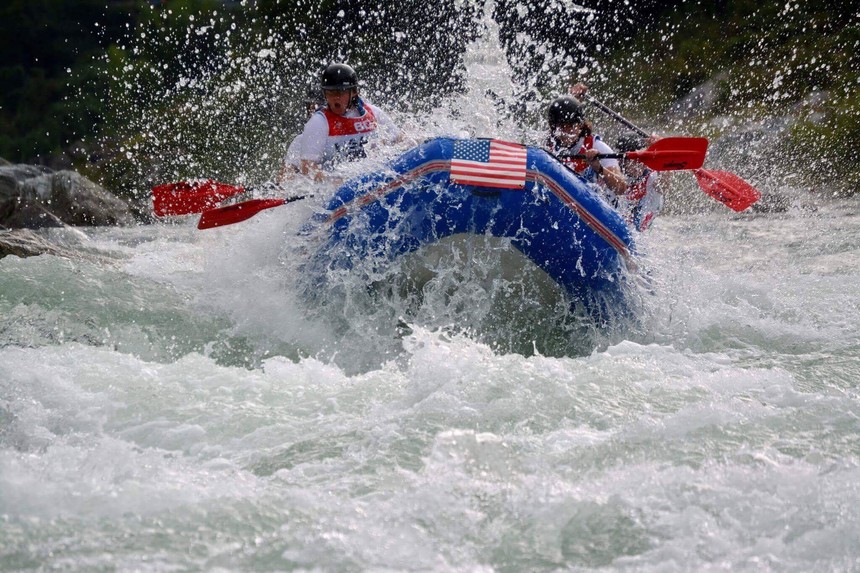 The She-Ra's competing at Worlds in Japan. They may not have won, but their journey to get there was nothing short of monumental. Salida She-Ra's photo.

The majority of the team worked for a few hours daily as commercial guides. Practices were held 3-4 times a week, and on off days everyone exercised individually for an hour through strength training, paddling, running: anything to improve endurance.

“It was so cool to see these young women progress in ways that took my Open team five years to figure out and to pass down those lessons on technique,” said Sutton. “The progress they made was phenomenal.”

The Salida She-Ra’s fundraised $2,000 of the $20,000 investment that would be needed to cover their team’s flights, housing, food, transportation, and race fees. The remaining $18K came out of their own pockets, while a handful of sponsors thankfully jumped on board to help supply gear: Sawyer Paddles and Oars, Atmosphere Mountainworks river skirts, Shred Ready USA helmets, and MTI Adventurewear PFDs. Lehto joined the team as their alternate paddler.

“I was really proud of Hannah,” Lehto told TGR. “I wanted to learn from her [as a captain] and from the Worlds’ experience, so that I could refine the process for [my] team.”

After their successful trip to Nationals, Lehto (top right) is hoping to take her experience from life with the Sirens and apply it to a new team for 2019 Worlds. San Juan Sirens photo.

In October, the Salida She-Ra’s became the first U.S. U23 women’s team at WRC in Japan—which also served as their first-ever competition as a team. They finished in fifth place–out of a total of six teams–but the mere fact that they made it there was an accomplishment.

“They were strong and came a long way. It was an eye-opener for them. I told them to not compare themselves to other teams,” said Sutton. “They were laying a foundation for other youth teams to return to Worlds. They all had a willingness to throw a cross in the wind and go for it.”

Ultimately Sutton and Walker’s efforts worked: In 2018, Lehto is launching a women’s whitewater raft club team at Fort Lewis College and hoping to qualify for WRC 2019.

Stoked for you ladies!! Thanks for shout out!!

Heated outdoor seating provides another solution to current social distancing guidelines. DragonSeat photo. The great outdoors have made a comeback during the COVID-19 pandemic. National parks have seen record visitors, bike companies are completely sold out, and many restaurants have made large expansions to their outdoor dining options. But what does the arrival of winter mean for happy hour on the patio? While some restaurants are opting for things like semi-permanent heated geodesic