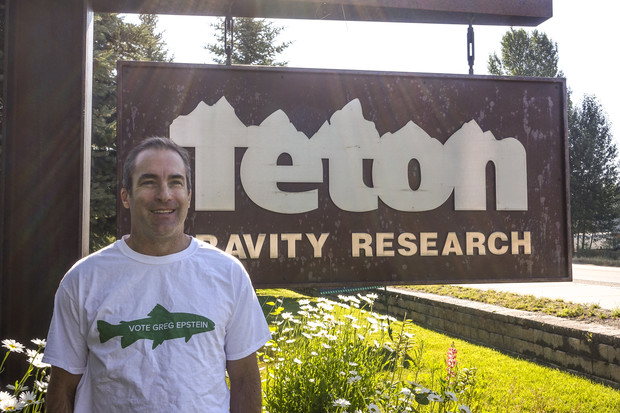 Greg Epstein outside of his place of employment. Jonathan Desabris photo.

In 2014, Greg Epstein, Head of TGR'S Physical Production, was skiing Granite Canyon off of Jackson Hole Mountain Resort when he got caught in an avalanche. We’re not talking just a small one; Epstein went for a thousand-foot ride, cliff included, that should have killed him. Through this experience and the events that followed are what inspired Greg to run for Teton County Commissioner.

Teton County Search and Rescue landed Epstein in the local hospital, but not in one piece; one leg was shattered, his pelvis broken. My ski patroller self pried for the gritty on the avalanche, trauma and rescue, but his recount headed elsewhere. Epstein zeroed in on something I wasn’t expecting: community.

Between bite-sized descriptions of his battered body, Epstein indulged in hearty ones of the supportive folk of Jackson Hole. Epstein’s no stranger to the majority of Jackson’s populace, having been born and raised in the area, but what touched him most was that passerby he recognized from grocery store aisles and trailheads flocked to his bedside. This outpouring of support inspired Greg to become more involved in the community he already loved. 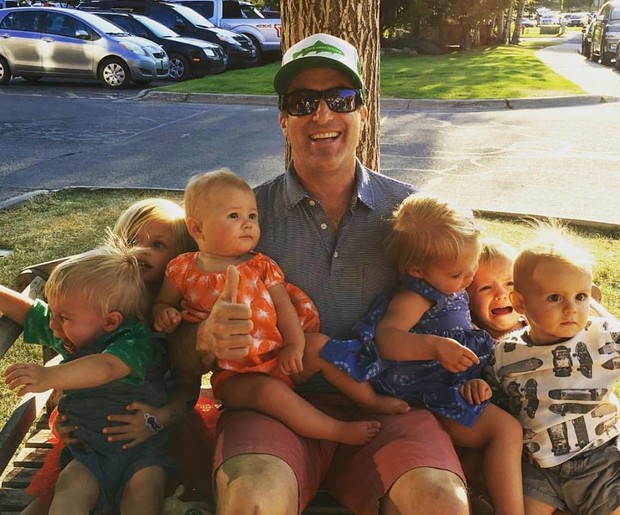 Greg works to inspire the next generation of Jackson Hole. Greg Epstein photo.

Here’s what you need to know about Epstein: he is a lifelong long fan of all things outdoors. He’s Jackson though and through. But above all, Epstein’s a community guy, and he’s working doggedly to stop Jackson’s core from crumbling. He's running for Teton County Commissioner.

Billionaire vacation-home owners have made Teton County the richest nationwide, simultaneously gentrifying it into a worsening housing crisis. Rents are rising (while new housing developments are not) and your average Jacksonite’s being asked to cough up San Francisco sums on mountain wages. They have a couple words for that: effed up. 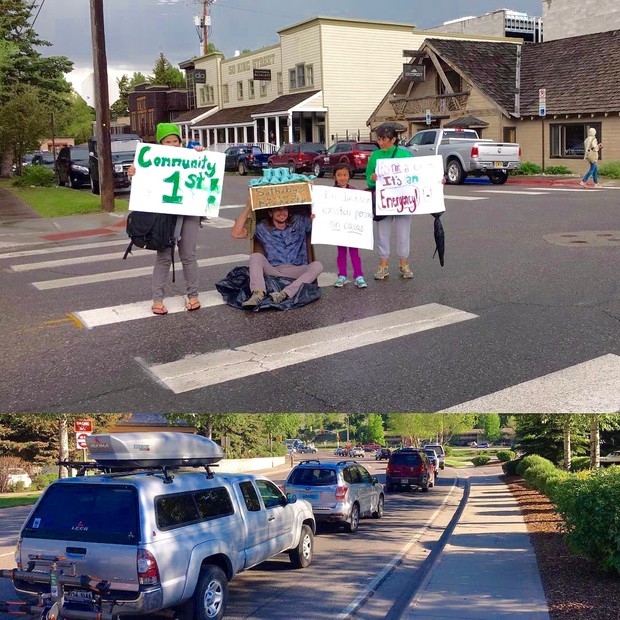 There's a reason mountain dwellers are hardcore, and not just because bears are their cohabitants. Let me introduce you to two of Jackson Hole's troublemakers: traffic and sparse housing. Greg Epstein photo.

But dot-commers and the TV series Silicon Valley that’s turned Jackson into a household name can’t be blamed for all the area’s woes. Along with housing, Epstein believes that traffic is another problem that is equally plaguing Jackson Hole. He’s pushing for an exhaustive reworking of the transportation system that would include more routes and buses (equipped with bike racks), as well as a reliable and frequent schedule. He also suggests adding roundabouts and daycare centers in public transportation hubs.

Jackson and Epstein face balancing a tourism-based economy with enough affordable homes, all while maintaining the area’s unique charm—even the town’s sidewalks are rustic wood. Jackson rightfully focuses on nature and conservation, and while Epstein’s ideas fall fully in-line with both, not butchering old-world beauty’s hard. Just ask Park City; their growth post-olympics defaced much of the town.

Epstein grew up ski racing, and mountain biking was, and still is, his main summer activity. Post-avalanche, however, fishing was all he could do. Anything to be outdoors. Greg Epstein photo.

A man of mountain towns, Epstein knows what makes a good one tick in spite of overcrowding, and he says Aspen’s pretty much nailed it. How? They created a bus system that was worth changing your behavior for, and that willingness is what it all boils down to. Are you willing to change your behavior to help the community?

Having moved from a city where I spent half my firstborn on parking, it’s refreshing to hear charging to park in the urban core isn’t one of Epstein’s preferred solutions. “But,” he says, “sometimes a heavy stick is needed to change behavior.” It’s time to reconsider your unnecessary car trips. It’s time to think about consequences, about how your actions are affecting your people.

Another plus is that he’s anti-road growth. Widening roads would be Epstein’s last resort; Jackson’s two-lane system is a large part of what’s kept the area so darn handsome, gorgeous, and everything in between.

“My vision of jackson is that people start to embrace other modes of transport besides cars, and use them consistently, thus removing a healthy portion of the daily traffic, and all without creating five-lane highways everywhere.” 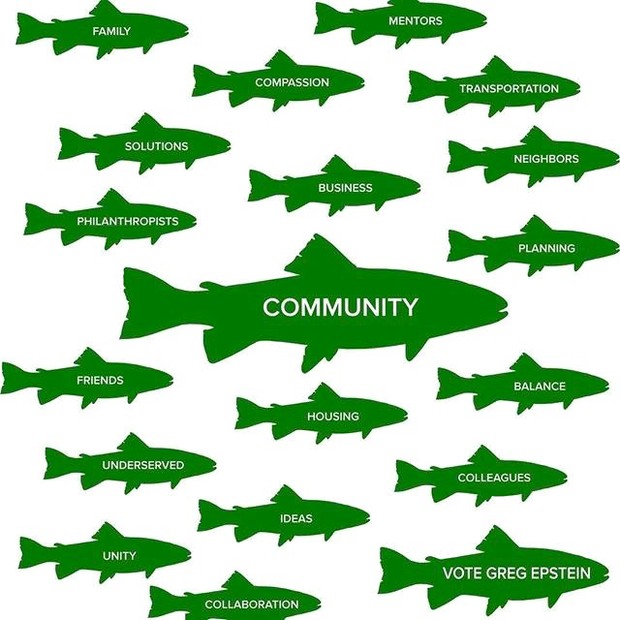 Community means everything to Epstein, hence his logo; schools of fish stand for coming together, and working as a unit. Greg Epstein photo.

Epstein says it’s a “simple reality” that not everyone will be able to live in Jackson, but says, “The people willing to put in the time—the people not weeded out—should be able to.” He explains that persistence should be rewarded, especially for those who give back the community.

To avoid the community of commuters Jackson’s on the road to becoming (pun very much intended), Epstein speaks of strategic housing developments. In other words, complete neighborhoods with efficient transportation plans. The key: density. Epstein reassures there are developable places, but says, “At the end of the day, there will always be some sort of housing crunch…We’ll still be talking about it as a problem in ten years…It’s always been a problem, and always will.”

You might be thinking, “Screw that,” but Epstein’s a realist, and he’s lived here long enough to know what’s up. Painting everything rosy isn’t on his agenda. What is is securing the community and preserving the mountain town charm. 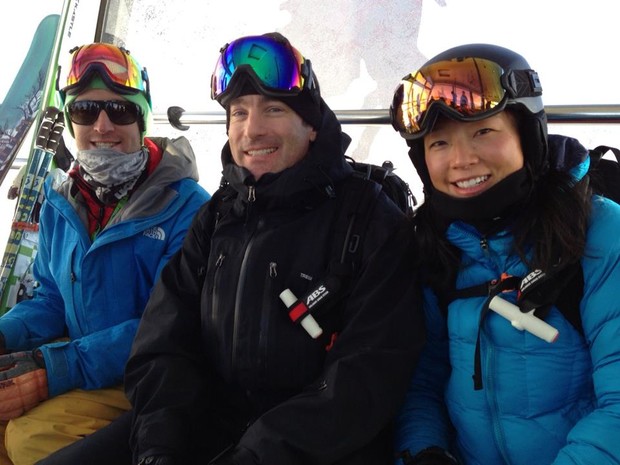 Epstein also suggests businesses step up to the plate, saying, “We can't just rely on the public sector of our community to come up with solutions and money…As a community, we will need to collaborate with private investors to help with the housing issues, and streamline the process for businesses to manage their own housing needs.” He suggests businesses provide housing for transient employees, instead of making it the responsibility of the tax base. But if that doesn’t sound good to them, they could just raise wages. It doesn’t take rocket science, just a willingness. Again with that word.

Epstein says there won’t be a quick fix to the housing and traffic dilemmas, but smarts, passion, patience, and perseverance will preserve the Jackson community we love so much. Everyone gets derailed; Epstein’s got the perspective and intuition Jackson Hole needs to get it back on track.