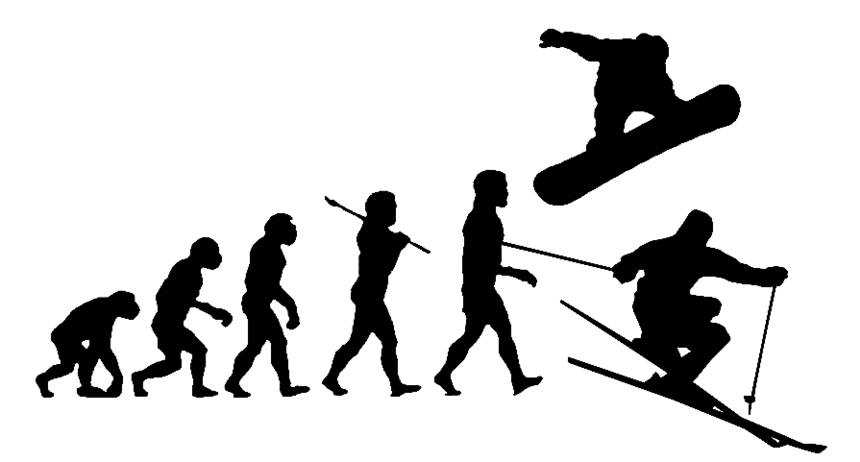 A graphic released with the university study diagrams the chronological phases leading to the evolutionary mutation. Creative Commons photo.

CAMBRIDGE, Mass. — A groundbreaking academic study commissioned by Harvard University’s Department of Anthropology sent shockwaves through the action sports world Friday when preliminary findings confirmed what many have long suspected: Skiers and snowboarders share common ancestry — and have been interbreeding for over 45 years.

Co-funded by Harvard University and the Ski & Snowboard Reconciliation Foundation, the study traced the genetic divergence back to a particularly raucous 1977 wet t-shirt contest held in Northern Michigan, where an arcane mixture of booze, neon lycra and psychedelics catalyzed the freakish mutation.

“It all started with the love of sliding downhill — and drugs,” Harvard anthropology professor [and skier] Tim Davis told TGR during a Skype interview. “Skiers and snowboards have been estranged for much of their collective history, but the truth is, had it not been for the perfect combination of bad Grateful Dead cover music and debauchery that night in '77, we would likely all still be skiers.”

The professor hopes the findings will lay the foundation for a new era of understanding and compassion between skiers and riders, and believes that the time for tribalism, condescension and “sandbagging” should now finally be at an end.

Had it not been for the perfect combination of bad Grateful Dead cover music and debauchery that night in '77, we would likely all still be skiers.

The news sent the skiing and riding communities into crisis. Now bereft of a definitive tribal group, many on both sides were left to question their own identities. Study participant and 21-year-old research subject Marci Hannah, a snowboarder, discovered to her shame, that her grandparents were in fact, skiers.

“I don’t know who I am anymore,” Hannah said between sobs. “It turns out my uncle Ronny was part two-planker — I haven’t spoken to my parents yet — we haven’t had ‘the talk’ — but what if they want me to start skiing? It’s too much — I’m scared TGR!”

As of press time, mobs of skiers and snowboarders were protesting at Harvard University, but winter sport peace activists sought to dull the sharp edges, encouraging open dialogue and reinforcing the shared gratitude that “at least we’re not all snowbladers.”

Hello. Just wanna say that your article is really interesting. I really like ski and plan to follow those in my future. But i’m worry about my education coz of lack of time so seems like i’ll have to use some sort of custom writing help or something. Any suggestions how to improve my time magement ? And once again, your article is really great, thank you for it!

Do you want to apply to Ivy League? You can write an essay on skying as well. Why not? Have a look here https://essaydragon.com/blog/cornell-supplement-essay-writing for some interesting examples.