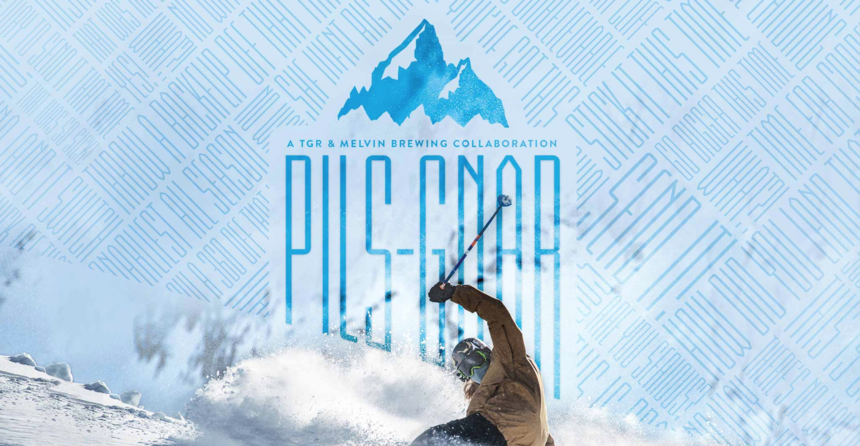 The Pils-Gnar is a new beer from TGR and Melvin.

The social fabric of every ski town is usually held together by a few institutions. Bars and restaurants where like-minded ski bums flock to bask in the glory of the day's turns and commiserate in the challenges of living in the mountains. In TGR's hometown of Jackson, Wyoming, Thai Me Up and by extension, Melvin Brewing, is a hub where locals flock to indulge in food and libations.

Melvin Brewing, which was originally started out of the Thai Me Up storefront, has been gaining more notoriety in the beer world over the past five years. The company has won gold medals at the prestigious Great American Beer Festival and recently opened a large brewing operation in nearby Alpine, Wyoming. 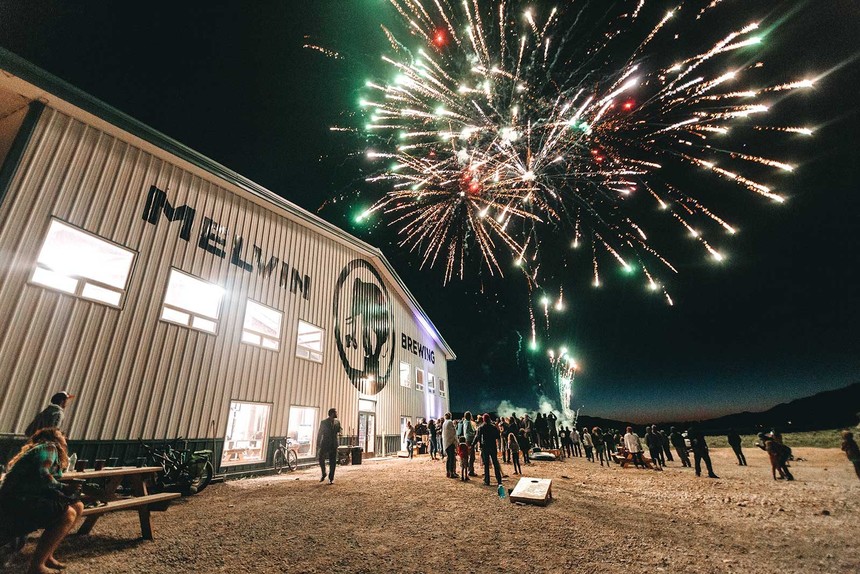 When you start comparing the history of TGR and Melvin the similarities are apparent. Both were started by individuals who moved to Jackson with a dream of riding big mountains and fresh powder. These dreams led to other projects that blossomed into something unexpected. Because of this shared passion, Melvin co-founder Jeremy Tofte reached out to TGR with the idea to collaborate on an epic new beer. As a result, TGR Pils-Gnar was born.

We sat down with Jeremy to talk about his early days as a ski bum, how he started his brewery and what the TGR Pils-Gnar means to him.

What brought you to Jackson? 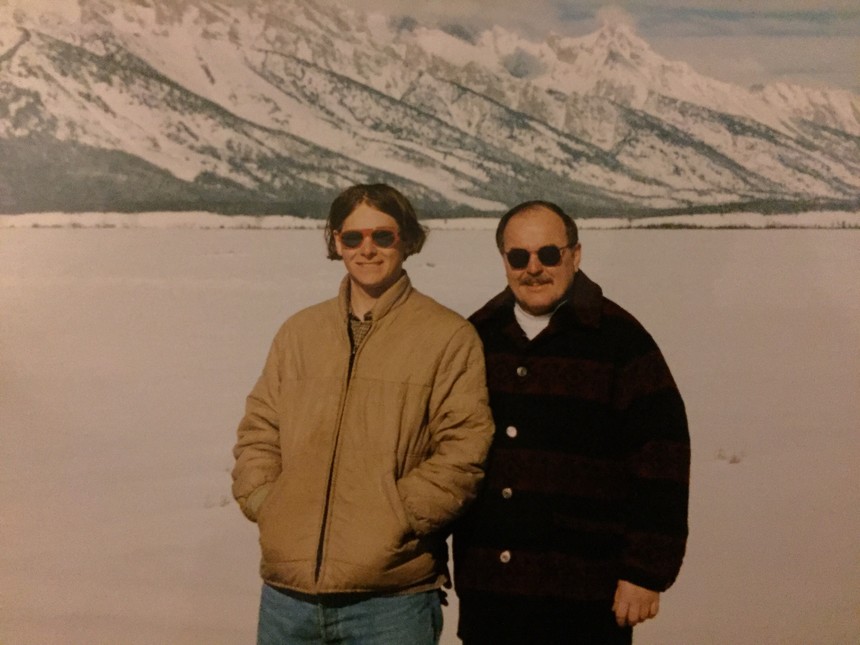 Jeremy in his dad in the Tetons. Jeremy Tofte photo.

I grew up around Mt. Baker, which is in northwest Washington and it's really steep and we get a lot of snow. So growing up, we got really good really fast. Then I went to community college in Bend, Oregon. That was fun, but it was really flat–however, it was the first time I experienced dry snow in my life and that changed everything. Mt. Baker is just wet and sloppy. At lunch, you would go in and change your clothes and get an entirely new set for the afternoon session. This was before the internet, so I didn’t know that there were different kinds of snow–to us it was just snow.

I had a friend in Bend who kept on talking about the Tetons. There was an old snowboard movie that showed the JHMR tram and I didn’t put it together that the Tetons and Jackson Hole were the same place.

I tried moving with my Volkswagen Bus to Salt Lake, but Salt Lake just wasn’t being cool to me. So I went to a pay phone and called my best friend's mom, who was named Hubert, a.k.a Hub, to ask where he was.  She said he was in Jackson, Wyoming. I went to the library and looked up Jackson, WY. I said, “Oh, I think that’s Jackson Hole." I jumped in my car and drove up from SLC up to Jackson. His roommate moved out, and that’s when I figured out that Jackson was Jackson Hole, which is also in the Tetons. This was in 1994.

What were the first couple of years in the valley like? 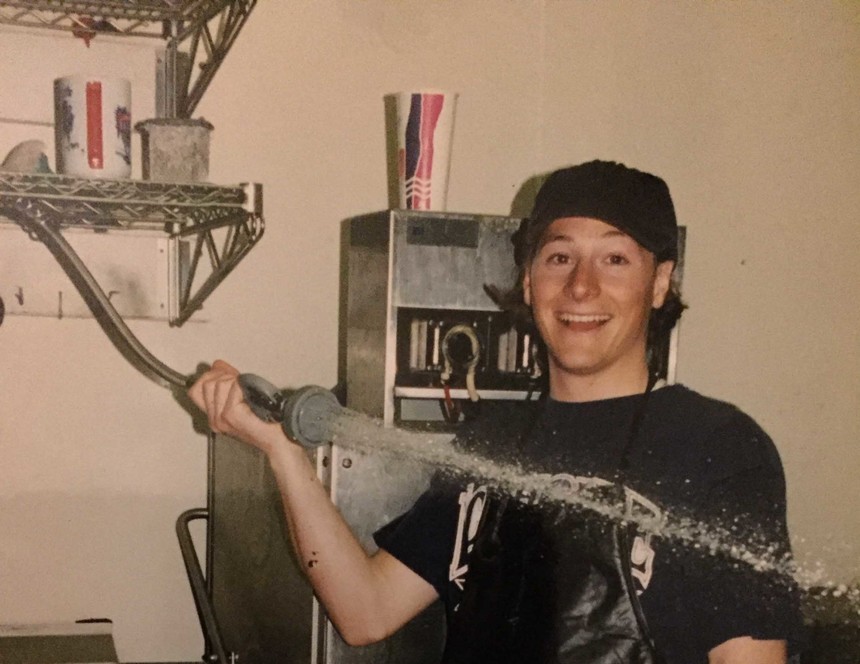 I was just loving it. We all love steeps, but I LOVE steeps. It's what I grew up doing, so when I got to Jackson, I was thrilled. They had dry snow and steeps. I worked at Casper restaurant two days a week as a dishwasher because I proved to the manager that I didn’t need to come in at nine o'clock in the morning like everyone else. I could come in at noon and bust ass so hard that I could get caught up in the dish pit and that ‘s what I did. It let me ride powder even more.

What was your first introduction to the TGR crew?

That first summer I was working at The Bunnery as a waiter. I remember this little dude named Sick Rick came in when I was working as a host. He asked if I mind if I put a poster up for this ski film he was in. It was just so cool to see guys out there filming and realize it's for this movie.

Back then it was just Warren Miller. I love my dad and I love dad jokes, but I don’t need to watch a movie full of dad jokes. I remember the first TGR party–all of the buzz and excitement. These local kids made a movie, and it was a good movie. I have been so proud to be from Jackson ever since.

How did you go from working in restaurants to owning one?

I was writing this business plan for a Mexican restaurant that I typed up at the library and shopping it around to people I thought were wealthy at the time. I ended up working at a restaurant that went out of business in 1999. I kept harassing the landlord, asking him for the space. He basically said I had no money and that I couldn't have it. Six months later, the space was still empty and he finally said I could have it. I had only two months to prove that I could pay rent. It was my friend's dad's idea for the place to be a Thai restaurant. That was 18 years ago. I pulled it off! Every single restaurant after Thai Me Up were people coming into town with a ton of money and dropping coin. I started Thai Me Up with less than $10,000, which was actually loaned to me by a former TGR athlete.

Where did the idea for a brewery come from?

I grew up in a beer family. My dad was a beer distributor in Western Washington. I grew up working for him in grade-school at eight years old. Beer is part of who I am and I just fell in love with it. It tastes really good and can give you a buzz. What's not to love?

When I was 19, I lived in Bend, Oregon. At that time, there was one brewery in Bend called Deschutes. I had a fake ID, so I'd go there. Those beers were a game changer! I started home brewing and applied to Deschutes as a brewer when I was 20. I didn’t get the job, but at that point, I knew I could be a brewer. When I moved to Jackson, I knew I wanted to start a brewery. I knew that starting one would cost money–at least a million dollars.

I knew that nobody in their right mind would loan me a million dollars–so I started out with a restaurant to prove to the world that I could run a business. I knew I could raise the money to start the brewery, and that I'd have a track record that showed what I could do and that people would believe in me. It was a long, long process, but it worked!

When did you realize that Melvin had succeeded?

Nobody knew who we were when we entered the Great American Beer Festival for the first time in 2012. We were some small brewery in Jackson, Wyoming. The festival is the largest brewing awards show in the world. It’s the Olympics of beer. That first year, we won a gold medal for our Melvin IPA, 2x4 IPA and silver for our Cherry Bomb beer.

Nobody had ever heard of us, and to take home the two most coveted awards in the entire beer industry was surreal. When we were getting on stage to accept the award for the Melvin IPA in front of 5,000 people, our minds were blown. I knew then that we could turn this into something real. We were just doing it so we could ski all day! That’s when the wheels started turning for what is happening now.

Where did the idea for the TGR Pils-Gnar come from? 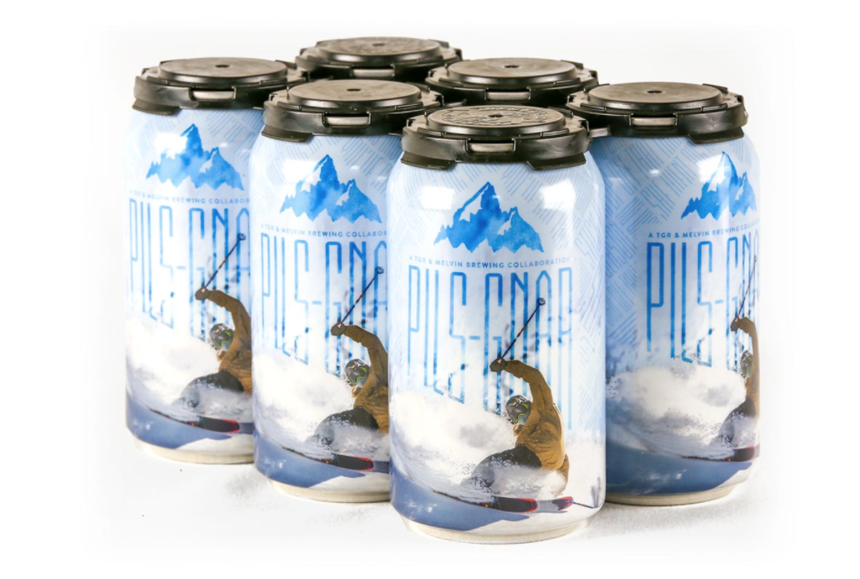 I've got a friend from South Dakota that's a brewer and we were throwing around beer names one night, coming up with names–and all of sudden, he said, "Pils-Gnar." I thought, "That’s the most badass name in the history of beer." We copyrighted it the next day. I got a hold of TGR co-founder Steve Jones and told him I had an idea. I had him come down to the new facility in Alpine. Once you see that place, you realize we're all about the business and getting our great beer to the people. As soon as Steve got there, he was like, "Let's do this."

We wanted to make a beer that everyone can drink. Melvin is infamous for making high octane beer, so we wanted to make something you can drink all night and ski hard the next day. And so, the TGR Pils-Gnar was born.

We wanted to make a beer that everyone can drink. Melvin is infamous for making high octane beer, so we wanted to make something you can drink all night and ski hard the next day. And so, the TGR Pils-Gnar was born.
muslim holidays 2019
sample of authorization letter
letter of intent graduate school
w-9 request letter
chase business credit card
calendar 2019 printable
love letters for girlfriend

Come join TGR’s iconic Tangerine Dream on tour this summer! The 1980 Dodge Power Ram pickup truck steeped in TGR lore will be making the rounds, starting at the GoPro Mountain Games in Vail, Colorado on June 7. Back in the 90’s, Todd and Steve Jones bought the truck while adventuring in Alaska before driving it back to the Tetons. These days the Dream has a top speed of 55 - it might not run perfectly anymore, but it sure has character. The bright orange paintjob comes from the truck’s