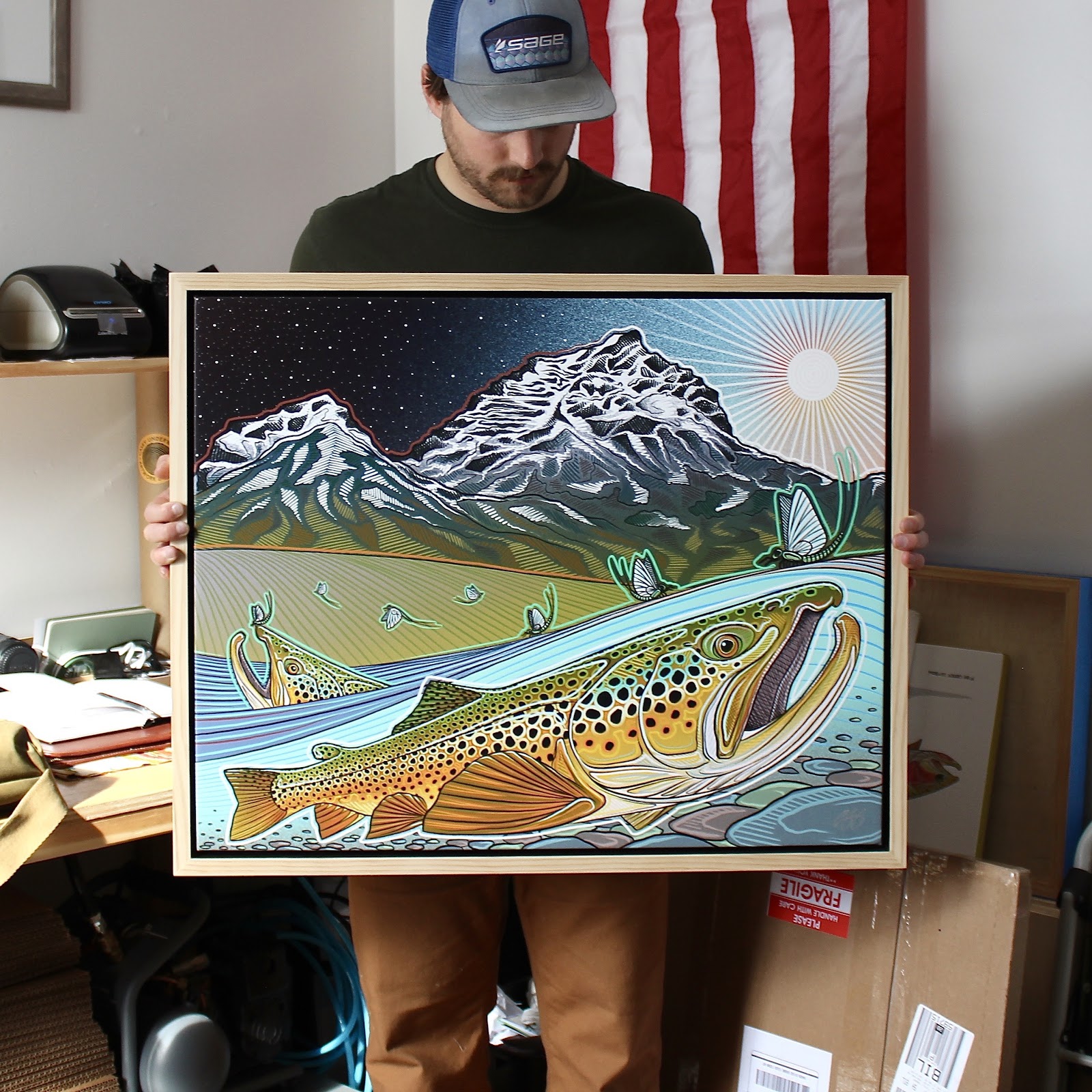 It’s a classic post-grad move: get your diploma, pack your bags, and go see the world. For artist Casey Underwood, this gap year rite of passage was an opportunity to explore the American West. There wasn’t much of a set agenda, except to fly fish in as many rivers he could find. His station wagon served as a makeshift home and was bursting with fishing rods and art supplies. Prior to leaving, Underwood had just begun the arduous journey of getting his artwork into galleries. Quickly, he realized that it wasn’t easy pursuing fine art as a career. This three-month road trip was meant to be a much-needed break before he dove back into that hustle. Well, that was the plan until fly fishing ultimately steered him off course.

Right before Underwood left for the trip, a gallery in Fort Collins, Colorado asked him to showcase a body of work. For the fun of it, he took a break from the abstract and conceptual work that he was known for in college and made a bunch of intricate illustrations of fish instead. The show was such a success that Underwood decided to make more pieces in that style. That show blossomed into more shows, and then a part-time job making art. Now Underwood is a full-time artist with serious chops with the fly fishing industry, doing collaborations with brands like Simms. But Underwood, who’s now based in Bozeman, Montana, is more than just a fisherman. Like most people based in mountain communities, he’s become a jack-of-all-trades who simply loves to be outside hiking, hunting, and skiing. And once again his artwork is evolving to reflect his passions, which is why he couldn’t be more excited to collaborate with TGR.

His latest body of work isn’t a complete departure from his iconic fly fishing style, but it sure captures that magical feeling of being outside. We caught up with Underwood to learn more about his career and the inspiration behind his new TGR t-shirts.

What’s your background with art?

Casey Underwood: I pretty much grew up North of Santa Barbara, California in a town called Goleta. In terms of art, I did a lot of art as a kid. I have a few artists in my family, so I think that played an influence growing up. My mom always told me that when I was an inconsolable toddler, she’d give me a pen and paper and that would be the thing to calm me down. My first art memories were having these art shows in my grandma’s driveway, and instead of having a lemonade stand, I’d sell these drawings of birds and fish. It’s funny because that’s what I’m doing now for a living. I’m super thankful that I had art instructors that encouraged me to pursue art throughout my upbringing. I ended up going to college for art and my emphasis was oil painting and printmaking. 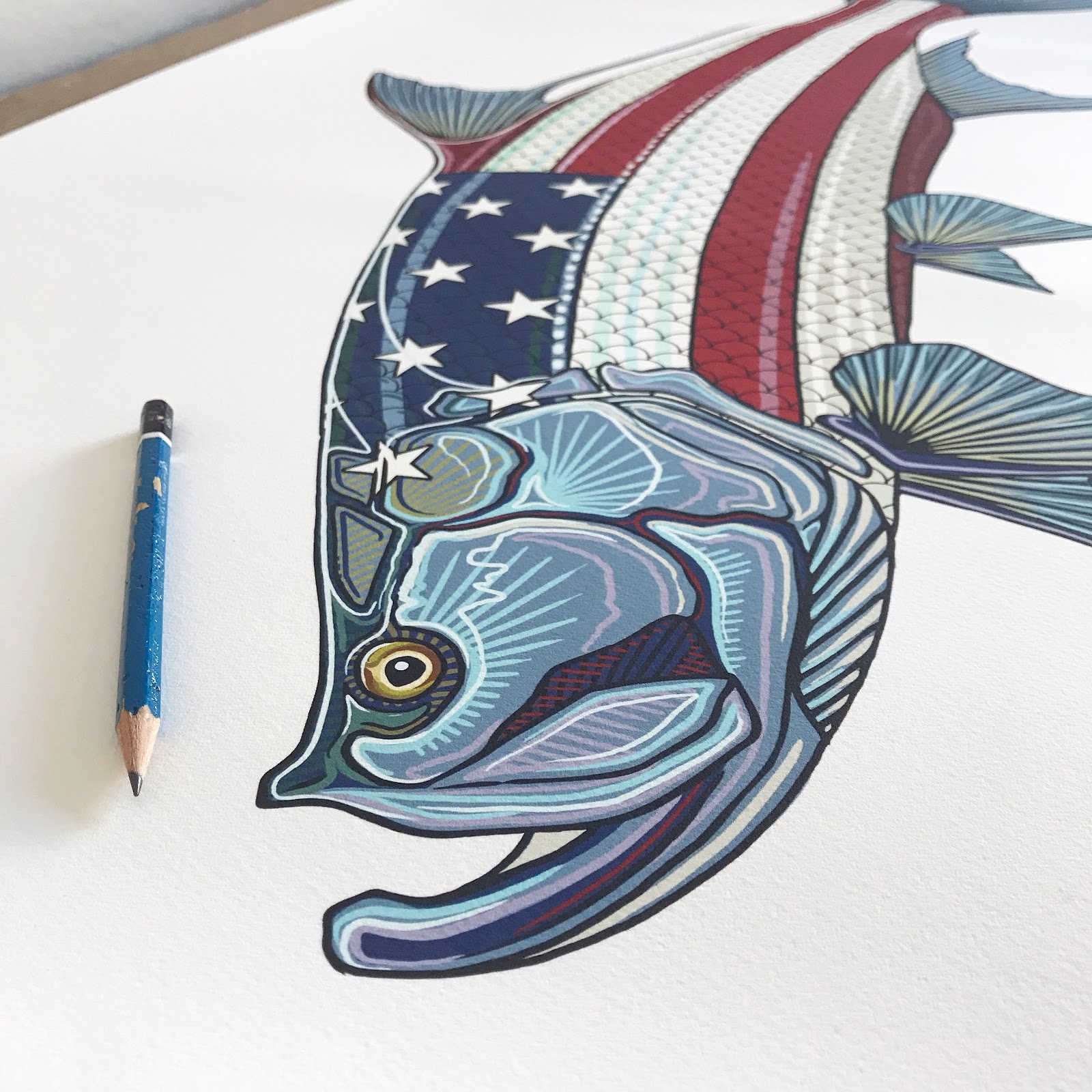 When did you make the decision to do art full time?

CU: Well after college, I had a part-time job and would do art on the side. In 2016 I made a New Year’s resolution to do art full time. I was getting to a point where I couldn’t juggle things anymore. I ended up quitting that part-time job on January 10th, so I made it happen real quick. It was a good decision from the start.

CU: Yeah! Both sides of my family fly fish, so I just grew up around lots of fly fishermen. The older I get, the more I appreciate the ocean, especially in Santa Barbara where the mountains pretty much meet up with the water. But these days, I’m much more drawn to the mountains. I also love rivers, and I think growing up in California where drought is a real issue pushed me to seek out rivers and bodies of water that are thriving. That’s part of the reason why I love living in Bozeman. 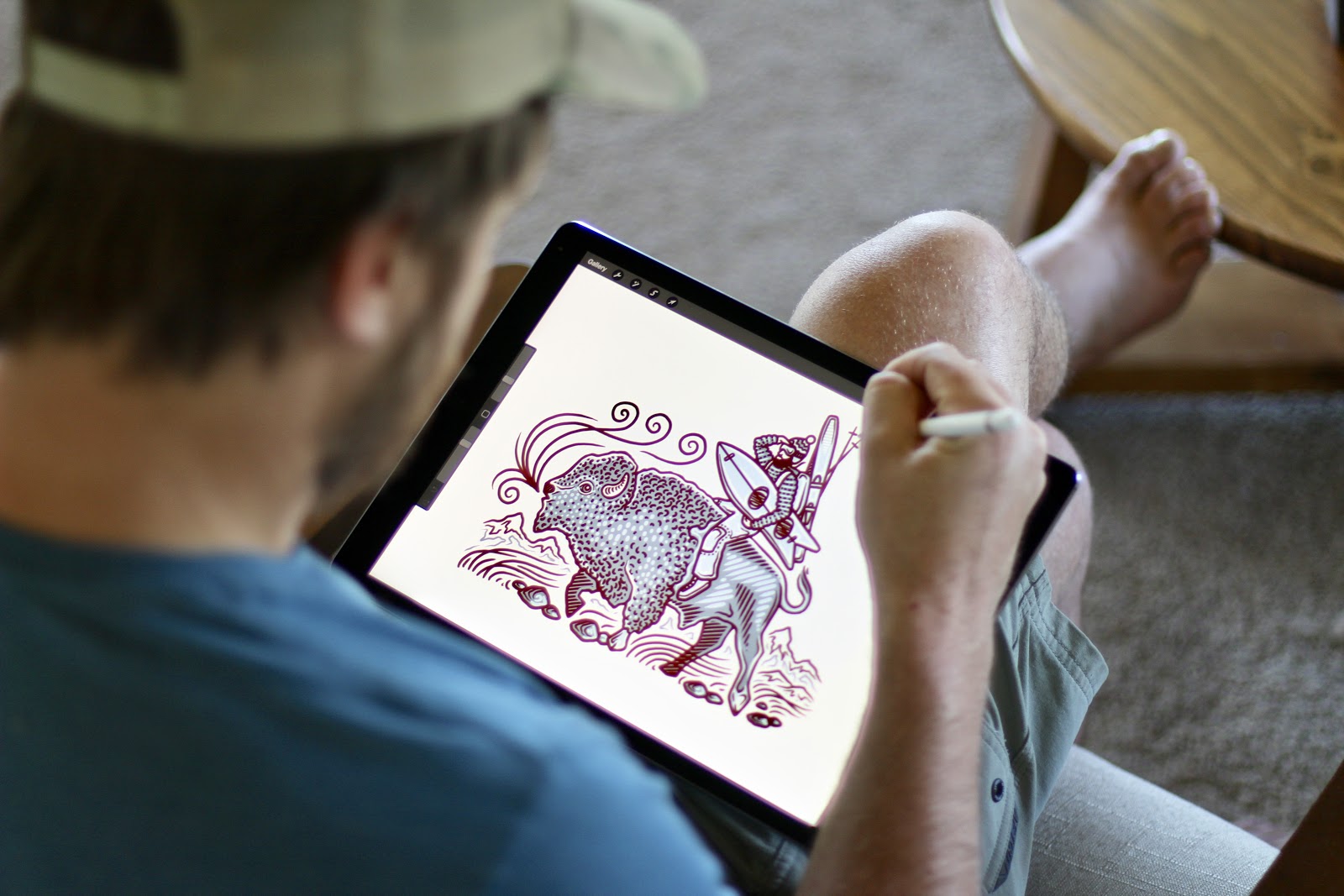 In college, you described your work as being more abstract and conceptual, what pushed you into the style that you have now?

CU: Honestly, I found myself pursuing this kind of accessible artwork because I thought I could make a business with it. I did the gallery thing and found it to be a tough realm in which to make a living. The people within that scene weren’t my kind of people too, so it’s awesome that I now get work with hunters, fishers, or just the outdoor industry as a whole. It’s cool to know that the people in the outdoor industry share the same passions as me.

There’s an incredible level of detail to your pieces. What drives you to create these super intricate pieces of artwork?

CU: Every artist has their own preferred stroke to create shadows or gradients, and I just love using the technique of cross-hatching. My work has always been very line-oriented and in college the reason why I loved etching and printmaking was that it relied on clean linework. I think that really inspired the current style I have now. Instead of just using lines to create shadows, I’m now using layers and layers of lines to create different colors. A lot of these illustrations can be made with anywhere from five lines to over 10,000 marks. 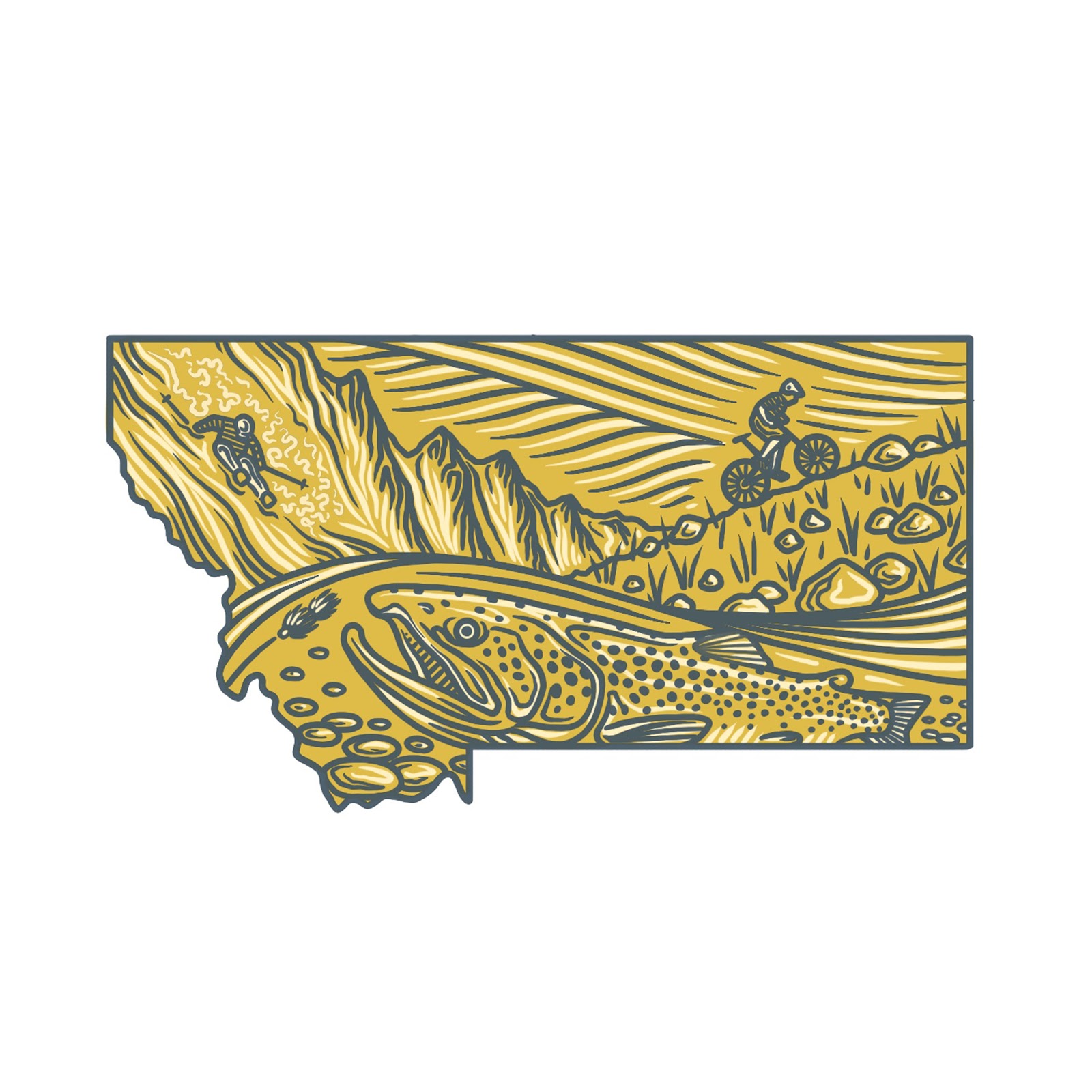 Skiing, biking, and fly fishing? We can't think of better things to do in Montana. Casey Underwood Art.

You’re starting to branch out and do more than just fish illustrations, what was the motivation behind that?

CU: I really enjoy fly fishing, but there are just so many other things in the outdoors that I’m passionate about. I like to bird watch, hunt, and ski. I want my work to reflect what it means to be an outdoorsman. My first step has been dabbling in things like bird and mammal illustrations, which brings in a whole new market for me. That’s why I’m so excited to be collaborating with TGR. I certainly want to be thought of as an outdoor artist, not just a fish artist.

RELATED: How Artist Peter Forsythe Landed His Dream Job with the Grateful Dead

What was the inspiration behind the illustrations you created for TGR?

CU: I did four pieces, and they’re four pieces that would resonate with any outdoor enthusiast really. A couple of them feature some wildlife, particularly this one called “Bison Shuttle”, which has this skier hitching a ride on the back of a bison. It was a fun one. There’s this other one that’s in the shape of Montana that’s got a whole scene of people skiing and mountain biking.

I heard you gave the Tangerine Dream a little makeover too.

CU: Yeah before the TGR collaboration I was doing this series called Dream Rigs, which are these vehicles that are absurdly decked out with outdoor gear. I wanted to do one of those for TGR, so I turned the iconic Tangerine Dream into this dream rig with a camper. There’s skis, a bike, and a fishing pole strapped to it as well.

This series I’ve done with TGR is exactly what I was to do more of as my career evolves. 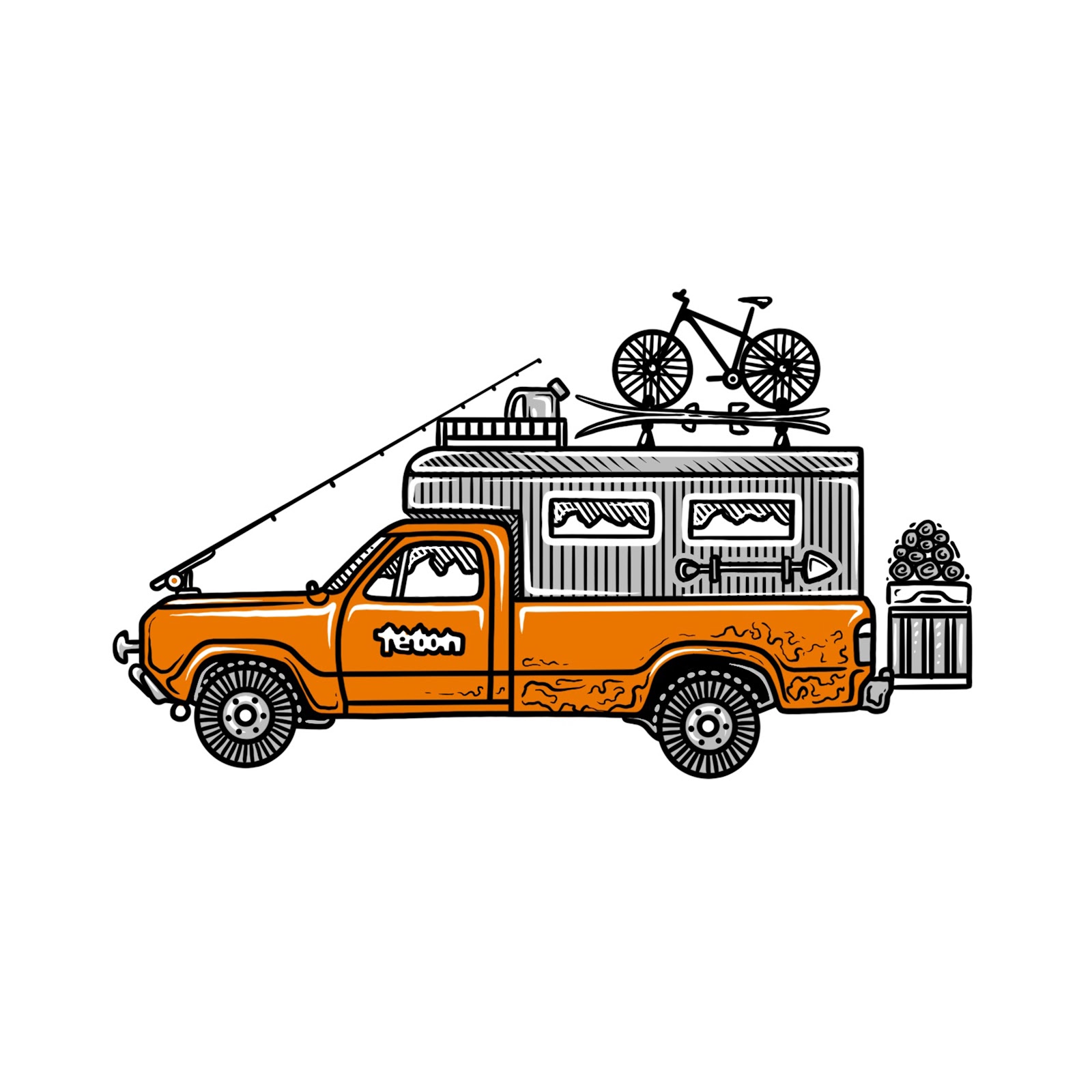 The Tangerine Dream just got a major upgrade thanks to Underwood's creative imagination. Casey Underwood art.

Like science fiction, diverse worlds of the future?.. like gloomy cyberpunk, neo-modern utopia, then take a look at this blog - SCI-fi arts. There you will find many new beautiful science fiction artworks from the most famous authors. Meet the Colombian Teen Fighting For Her Island’s Coral Reefs

Meet the Colombian Teen Fighting For Her Island’s Coral Reefs

This week in Women in the Ocean, we connected with activist and aspiring marine biologist Yassandra Marcela Barrios, who is fighting to protect her island's delicate coral reef. The Right to Roam photo. There’s a whole hidden world along the coastline of Colombia’s Tierra Bomba Island. Underneath the crystal clear water lies a labyrinth of coral reefs, hosting a multitude of marine life: fish, anemones, sea lilies, and sponges all in colors brighter than most artists' palettes. The first