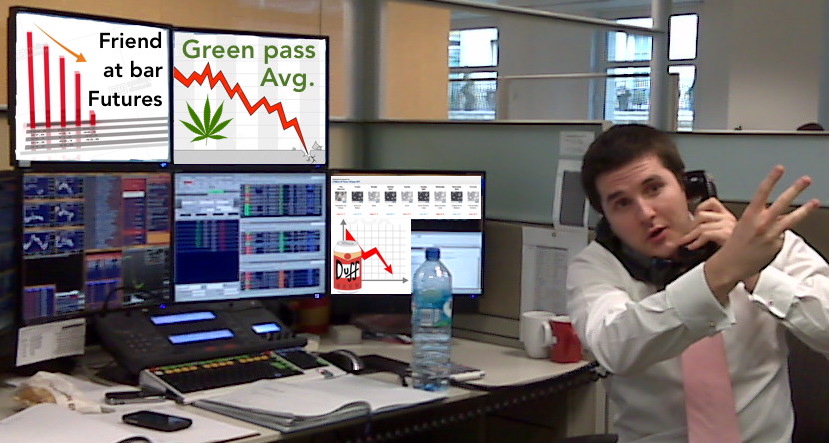 Also affecting the markets, beer conglomerate Ski Town Brewing (SKBR) announced another round of acquisitions, leading analysts to predict inflated prices at the tap for the coming winter season. Reactions to the deals were mixed, with many regional ski bums saying they’re “totally pissed" that their favorite brewery sold out.

In response to the disappointing NOAA data, ski manufacturers cut inventories in a bid to minimize losses, but many have already produced their 16/17 lines, making the possibility of heavy deficits likely for the coming calendar year.

Low-level bro-deal currency speculators were hardest hit by the NOAA numbers, with those trafficking in cases of beer and green passes seeing “enormous portfolio losses.” Low tide snow years have historically pushed down the value of most traditional mountain town commodities.

According to market-watchers, other factors such as ski town gentrification, a bad herb crop out of Northern California and inflated housing costs have also conspired to push up the average mountain town cost of living.

People’s beer and weed is going less far than in the past — ski town inflation is real.

“People’s beer and weed is going less far than in the past — ski town inflation is real,” bro-deal market analyst Bob Schilling told TGR. “A 30-rack is the new 12er in today’s bro-deal currency markets. With this year’s bad snow numbers, we’ll be seeing a whole generation of bartenders — people who’d normally be giving out free drinks — relocating to get real jobs and start families.”

Schilling, while optimistic about the long-term outlook for billionaires and seasonal homeowners, was vehement that the old days of dirtbagging through life on bro deals have pretty much ended.

“Green pass speculation is underwater and has been for a decade,” he said. “The market has spoken — and it’s clearly saying: ‘fuck poor people.’ The only good investments left are cheap, dilapidated vehicles, or as millennials call them, ‘homes,’ to flip for a healthy profit.”

Tetongravity is a very interesting website and This website provides accurate and useful information for me. I have enjoyed reading many of the articles and posts contained on the website, keep up the good work and hope to read some more interesting content in the future. http://ssapptricks.com/aliexpress-apk-download/