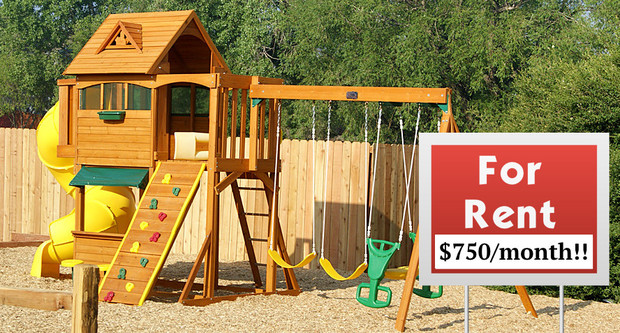 The school is asking a reasonable $750/month, plus no less than three “mandatory daycare volunteer shifts a week,” according to the property ad displayed in Jackson Hole News, Buckrail, Craigslist and several other community media outlets.

Regional demand is high, and as of press time, there were at least 57 different housing applications for the single playground rental, good for two-person occupancy, as well as up to five imaginary friends and/or make-believe acquaintances.

Local ski bum and freelance web develop Charlotte Rogers, 26, was ecstatic to hear of the playground’s availability, and has already prepared to move out of her ’97 Honda Civic that she’s been squatting in for the past 3 1/2 years.

“I’m f**cking stoked,” Rogers told TGR in a FaceTime interview. “Despite earning over $40k a year doing my freelance, not having a stable place to live, taking hippy showers in rural irrigation ditches, doing laundry once every two months — it takes a toll on your self-esteem. I mean, everyone jokes about having Peter Pan Syndrome in a ski town, so, at least if I get the playground, I’ll be able to authentically own my pathological immaturity.”

Not having a stable place to live, taking hippy showers in rural irrigation ditches, doing laundry once every two months — it takes a toll on your self-esteem.

In light of the rezoning, town officials have quickly branded themselves as powerful benefactors for the town’s working class.

“Once again,” Mayor Cara Sutter said, “town government has stepped up. With the unveiling of Town Square Shanties last summer, and now this, I think it’s becoming obvious to the working class that their elected officials care deeply about the optics of caring.”

The ad for the affordable rental made clear the playground has no electricity, lighting, kitchen or bathroom, however it specified that a construction site close by has several Porta Potties that may be inaccessible after 8 p.m. Notable perks include fresh tanbark installed in the last six months, a six-foot climbing wall leading to the second story as well as a misplaced TYCO plastic chair that “one of the kids may have peed on a while ago.”

Additionally, the rental will feature a built-in wake-up call Monday-Friday that directly correlates with recess times beginning no later than 7:35 a.m.