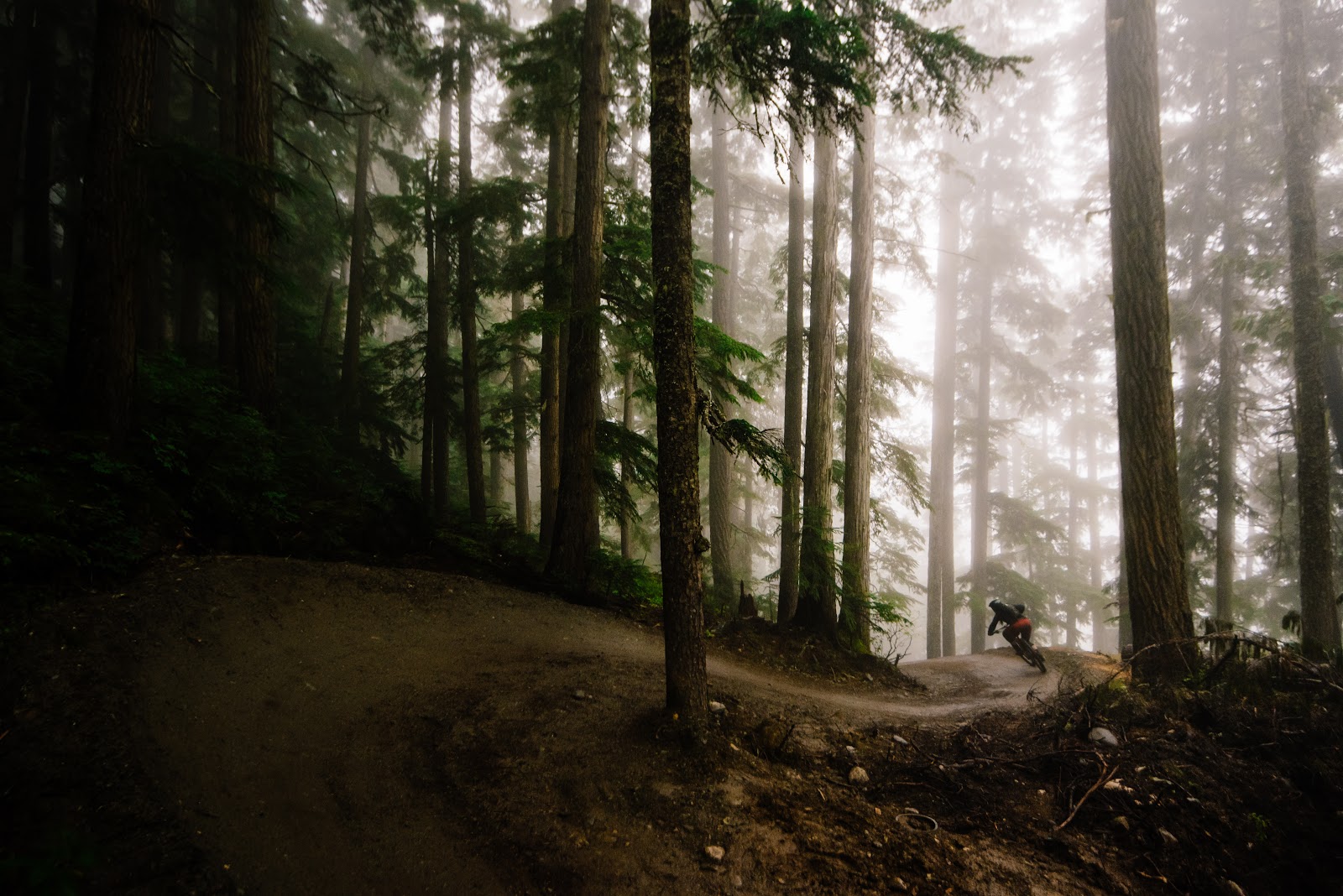 If you could photograph anywhere in the Whistler Valley, where would you go? Here's what caught my eye for the Deep Summer Photo Contest. Katie Lozancich Photo.

In April, my inbox finally had the email I had been eagerly waiting to receive. It was from the Crankworx media team and it happily revealed that I would be competing in this year’s Deep Summer Photo Challenge. Initially, I was ecstatic. 72 hours to shoot with a team of elite mountain bikers in one of the best riding zones in the world? That’s what photographers dream about! But the reality of the contest began to set in. Before I could relish in the experience, I needed to start planning—a lot. Cue the anxiety.

For those who are unfamiliar with Deep Summer, it’s an annual photo showdown that takes place during the Crankworx mountain biking festival in Whistler. For the past ten years, six photographers are selected to create a photo slideshow within a 72-hour window. The main theme of the challenge is to tell a unique story about riding in the Whistler Valley. Drawing from my background as a fine artist, I decided to celebrate creativity and imagination because it plays a huge role in our sport. 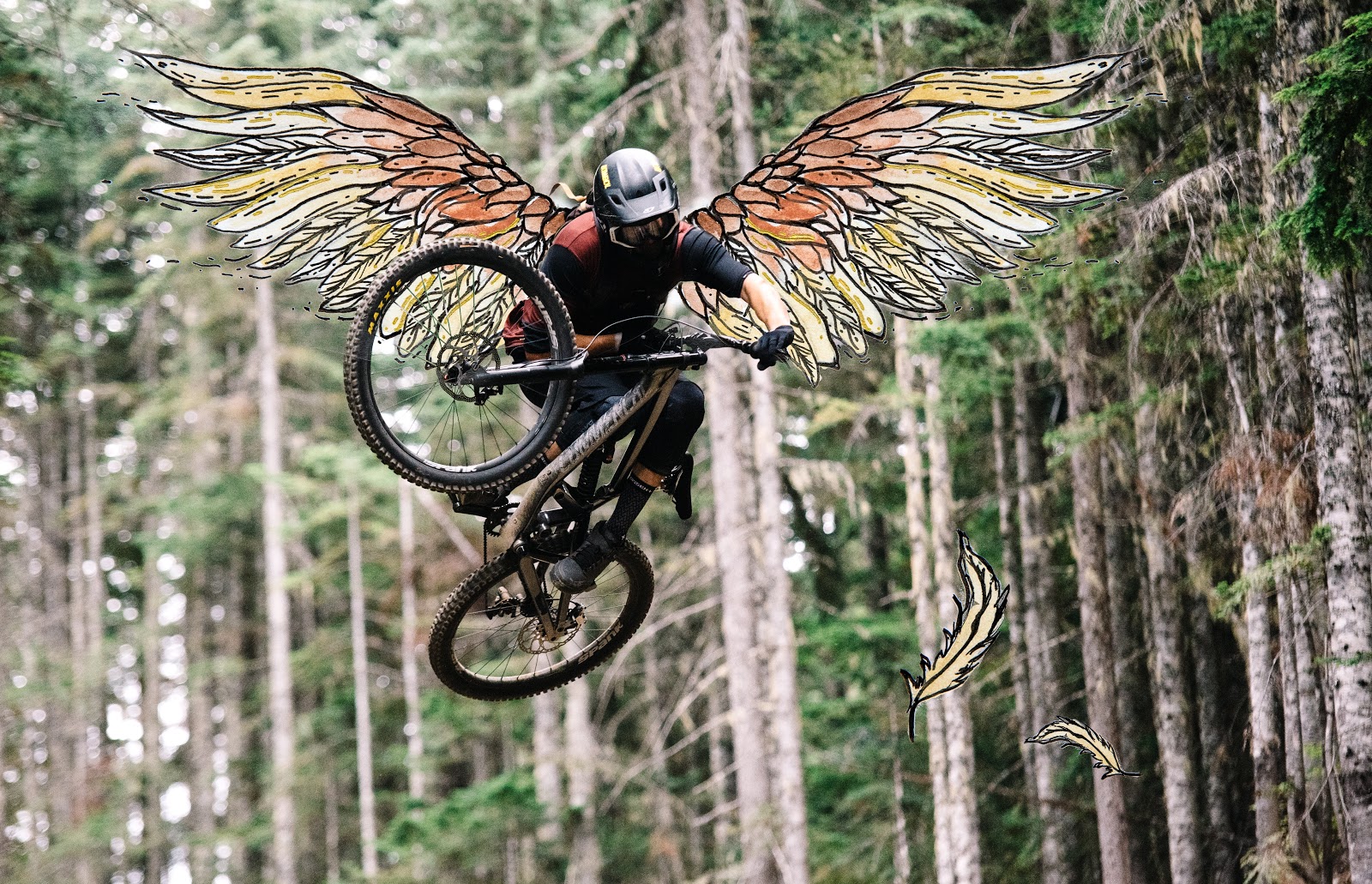 I took a different approach to the photo show by blending my illustrations into a few of the images. Katie Lozancich Photo Illustration.

Sleep is secondary, shooting is the priority. When the slideshows are completed, they’re debuted in an outdoor amphitheater while an eager crowd watches. The competition is a grueling endeavor, but it’s worth the hard work. It's rare for us photographers to see our images beyond the confines of an Instagram post or magazine spread. By far my favorite moment from the experience was hearing the crowd “ooh” and “ahh” as my photos lit up the big screen. It certainly made the long days with a heavy camera bag worth it.

Logistically, the contest requires a great deal of pre-production. By far the toughest element to coordinate was actually picking where to photograph. Aside from the rule of shooting 25 percent of the show in the Whistler Bike Park, we had a lot of freedom. Contest boundaries stretched from Horseshoe Bay to Joffre Lakes. That’s roughly a hundred-mile zone, and we only had three days. That’s like trying to pick the best Mexican food from San Diego to Los Angeles—it simply can’t be done. There are too many options.

Instead, I focused on certain features and landscapes I wanted to incorporate into my show. By creating these guidelines it made it easier to cross off objectives and enjoy the experience—because if you’re not having fun, what’s the point? So, with the help of a few of my favorite frames, here’s how I planned and photographed my Deep Summer show: 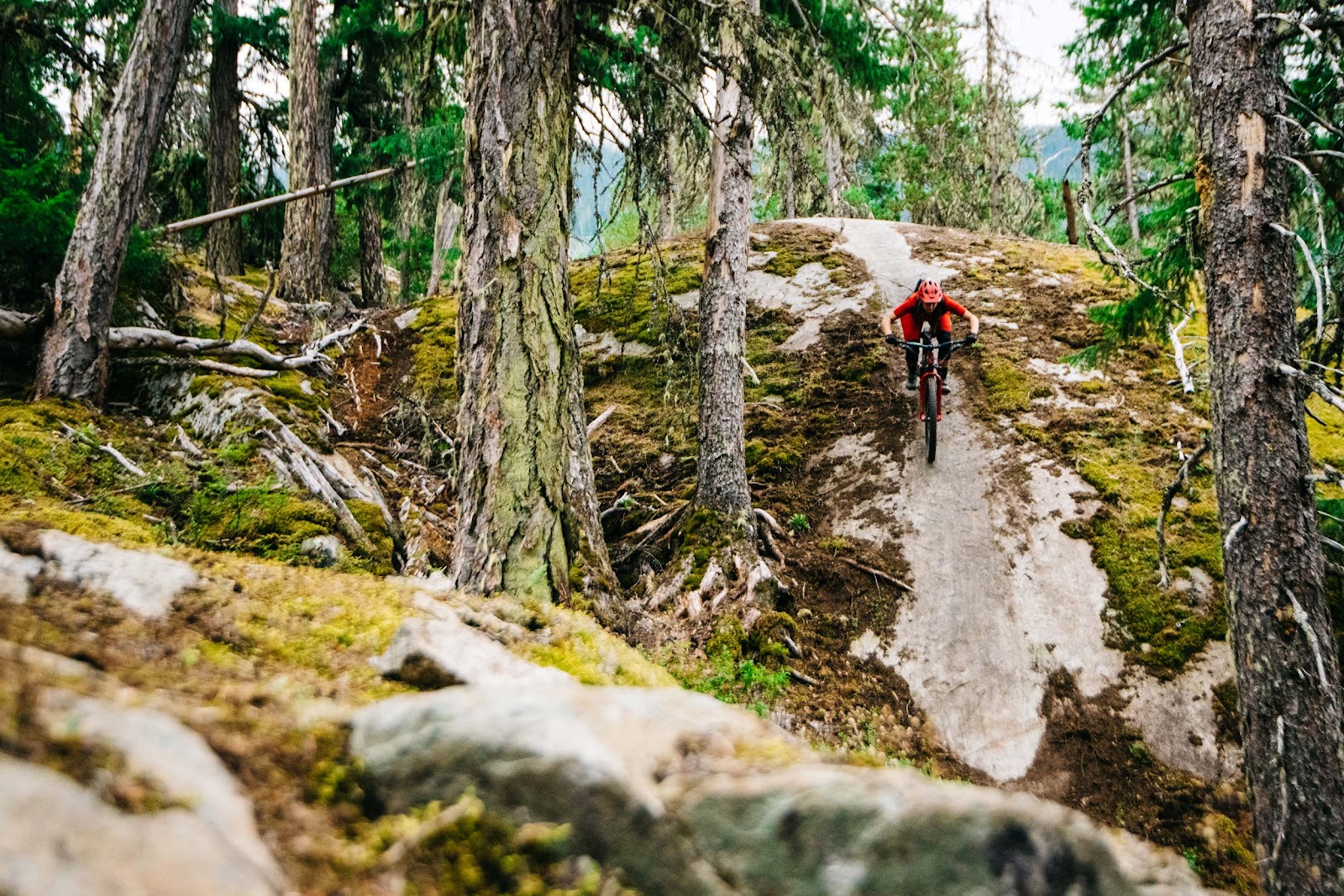 It wouldn’t be Whistler without big, beautiful, and burly slabs of granite. This kind of riding is iconic to the area, and there are lots to choose from. Our team explored a trail that was a quick drive from the bike park. It had no shortage of rocky features to play around with and that variety gave me plenty of options when I was in the editing stage. To our surprise, many of these big rocks were coated in a fluorescent green moss, which added nice pops of color and texture to the images. When shooting these kinds of features I tried to focus on highlighting how technical and gnarly they can get. Trust me, they were steeep. 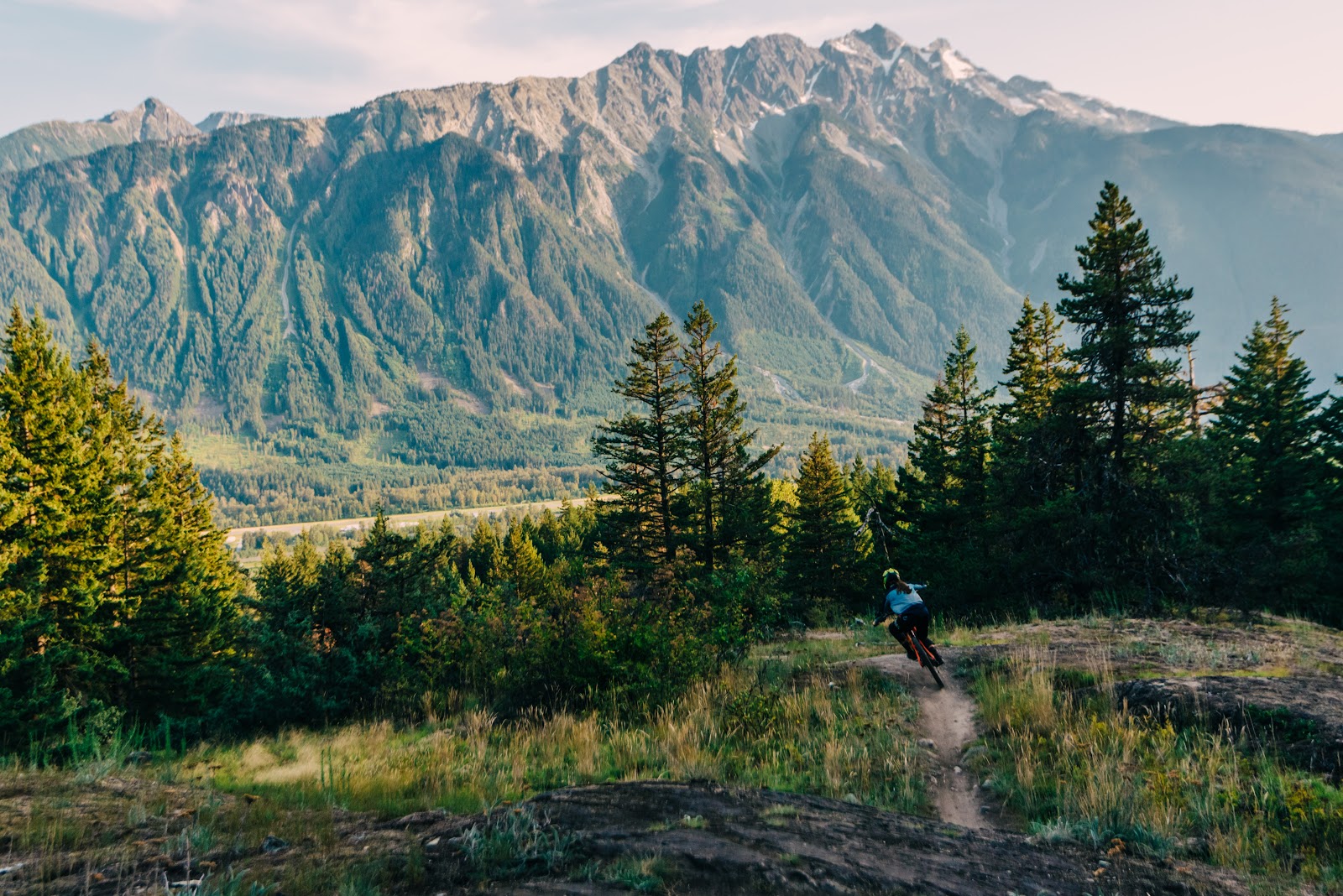 Whistler is a great basecamp if you want to explore its neighboring riding zones. Keeping this in mind, we made a small day trip to Pemberton. Despite being a mere 30 minutes away, it felt very different from Whistler. Pemby caught my attention over Squamish and the Sunshine Coast because of its sweeping alpine views. Out here, Mount Currie (Ts’zil) is the star of the show. The 8,501-foot mountain dramatically rises 7,000 feet from the valley floor, and on a sunny day, you can see her showing off from practically anywhere in town. Thankfully, the weather was clear, allowing us to appreciate the landscape in its full glory. 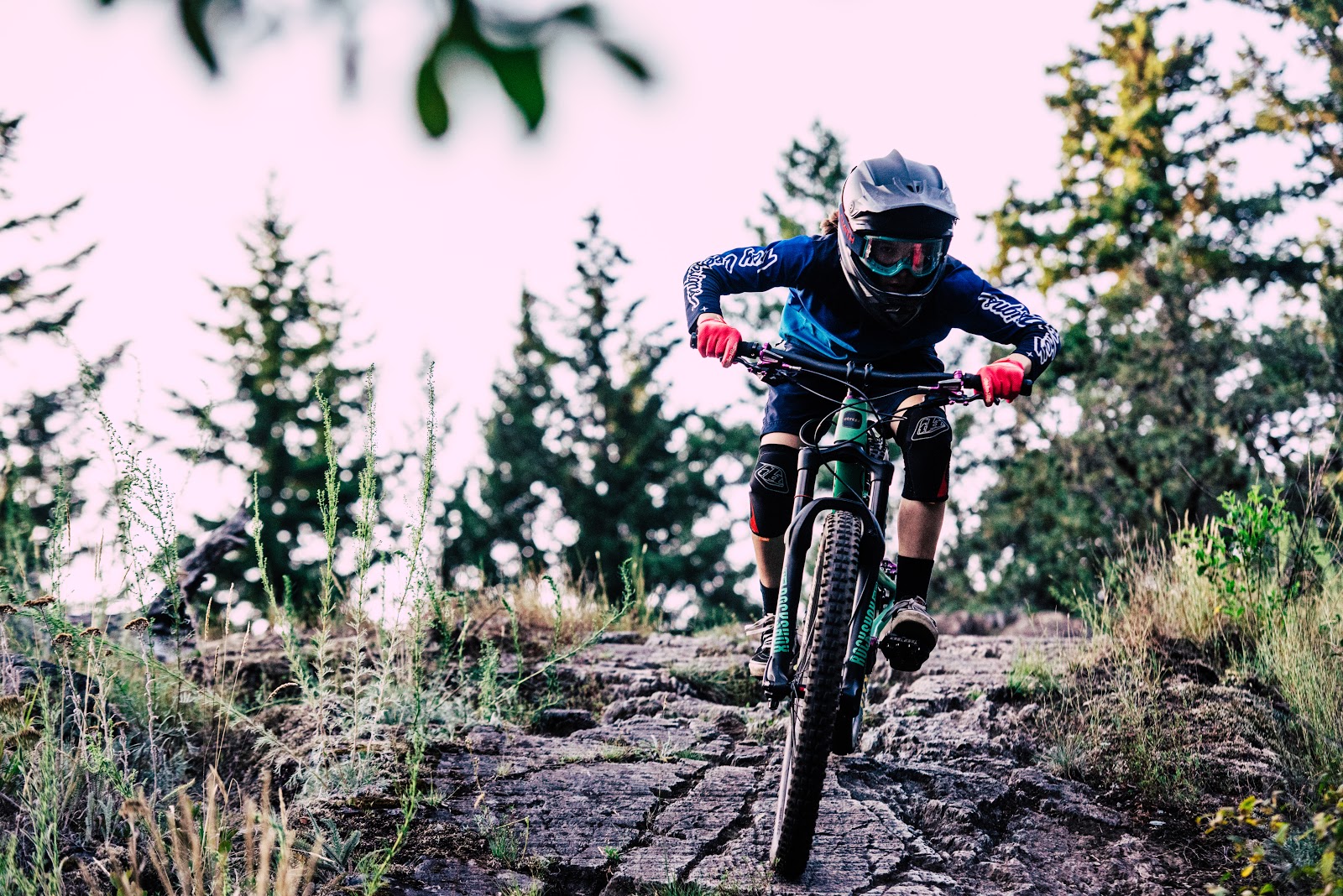 Brooke Anderson charging through a section of rock in Pemberton. Katie Lozancich Photo.

We hoofed it up to a local classic, which awarded us with what felt like CGI-like views of the mountain. On top of endless breathtaking views, the trail was chock full of B.C. style rock rolls. In fact, often we weren’t even riding on dirt singletrack, most of the time it was that good ol’ slabby rock. You just can’t escape it out here.

The other zone on our list for grandiose views was back in Whistler at the Bike Park’s iconic Top of the World trail. Unfortunately, the weather didn’t feel like cooperating. We stepped off the lift into a cloud of fog so thick that you could cut it with a butter knife. We hoped to see jagged mountains and icy glaciers but ended up getting stuck in a ping pong ball. That’s the game of risk you play with these kinds of photography contests. But all wasn’t lost. The fog, while difficult and annoying, creatively pushed us and the images. 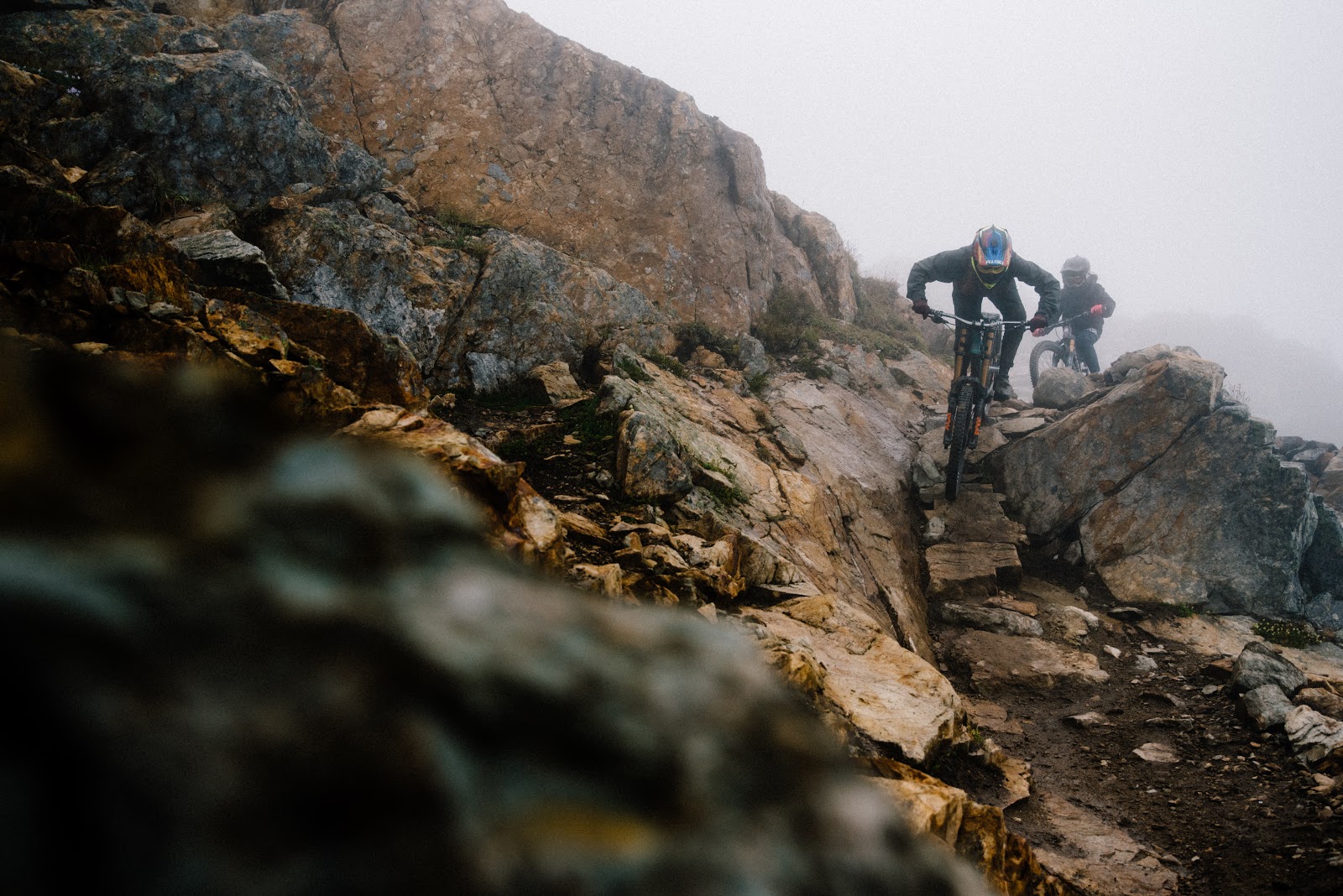 rKyleigh Stewart leads the way through the thick fog. The cloud made for a different perspective on a classic Whistler trail. Katie Lozancich Photo. 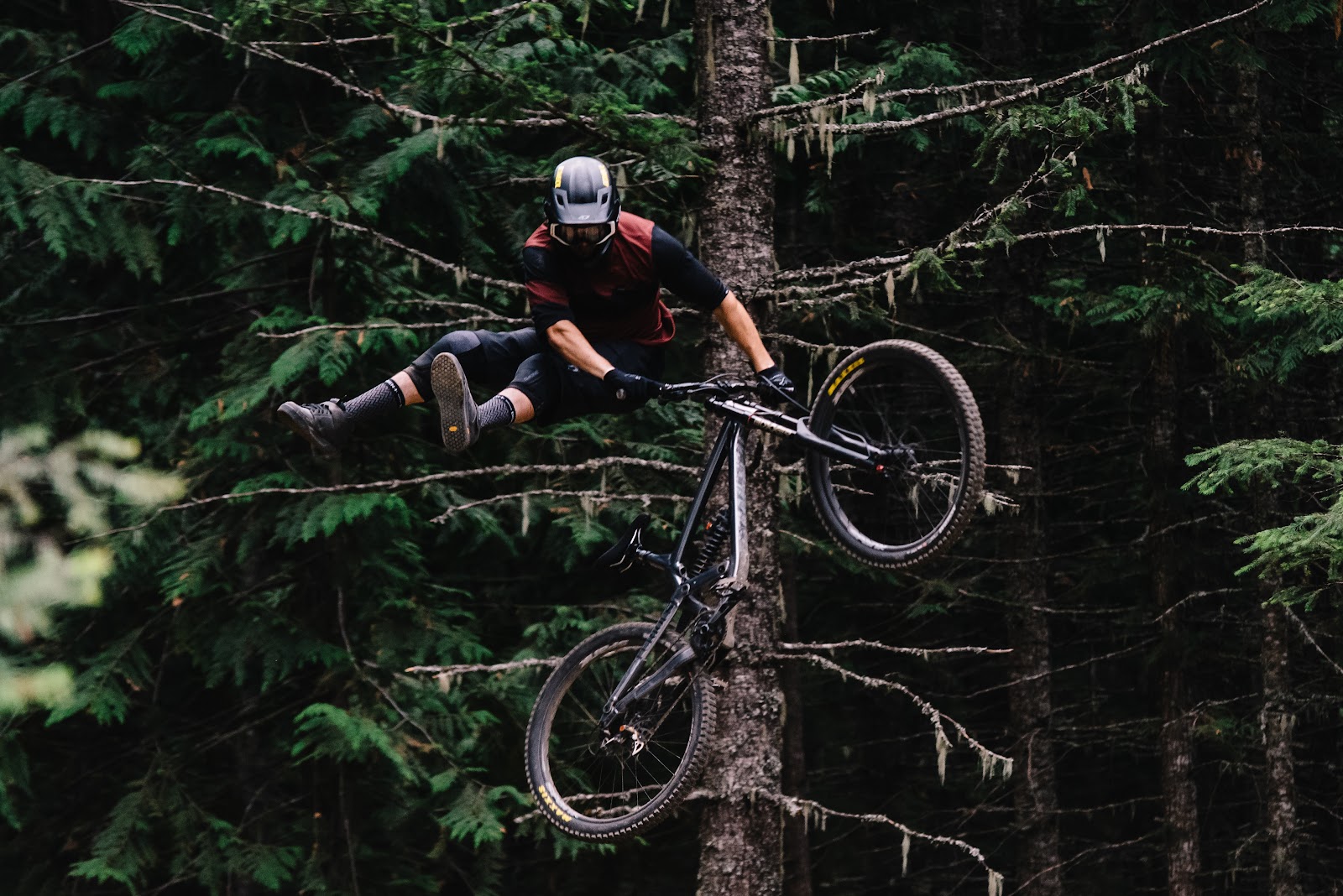 People come to ride the Whistler Bike Park because it’s arguably home to the best machine built jumps in the world. In fact, the locals boast that if you can conquer one jump, you can conquer them all. This trail craftsmanship pulls in the creme de la creme of mountain biking, and it creates this contagious environment to just send it huge. It’s the Hollywood of mountain biking and this feeling of playfulness is what I hoped to capture while shooting in the park.

Luckily, I had a team of rippers who were eager to push themselves. To keep things simple we focused our time on Whistler classics: Dirt Merchant and A-Line. Both trails are iconic for their jump lines and allowed for my athletes to have fun and go big.

Another great aspect of shooting in the bike park is the variety you have to choose from. If you’re not loving a particular shot simply ride to the next feature and start fresh. The creative opportunities are endless. 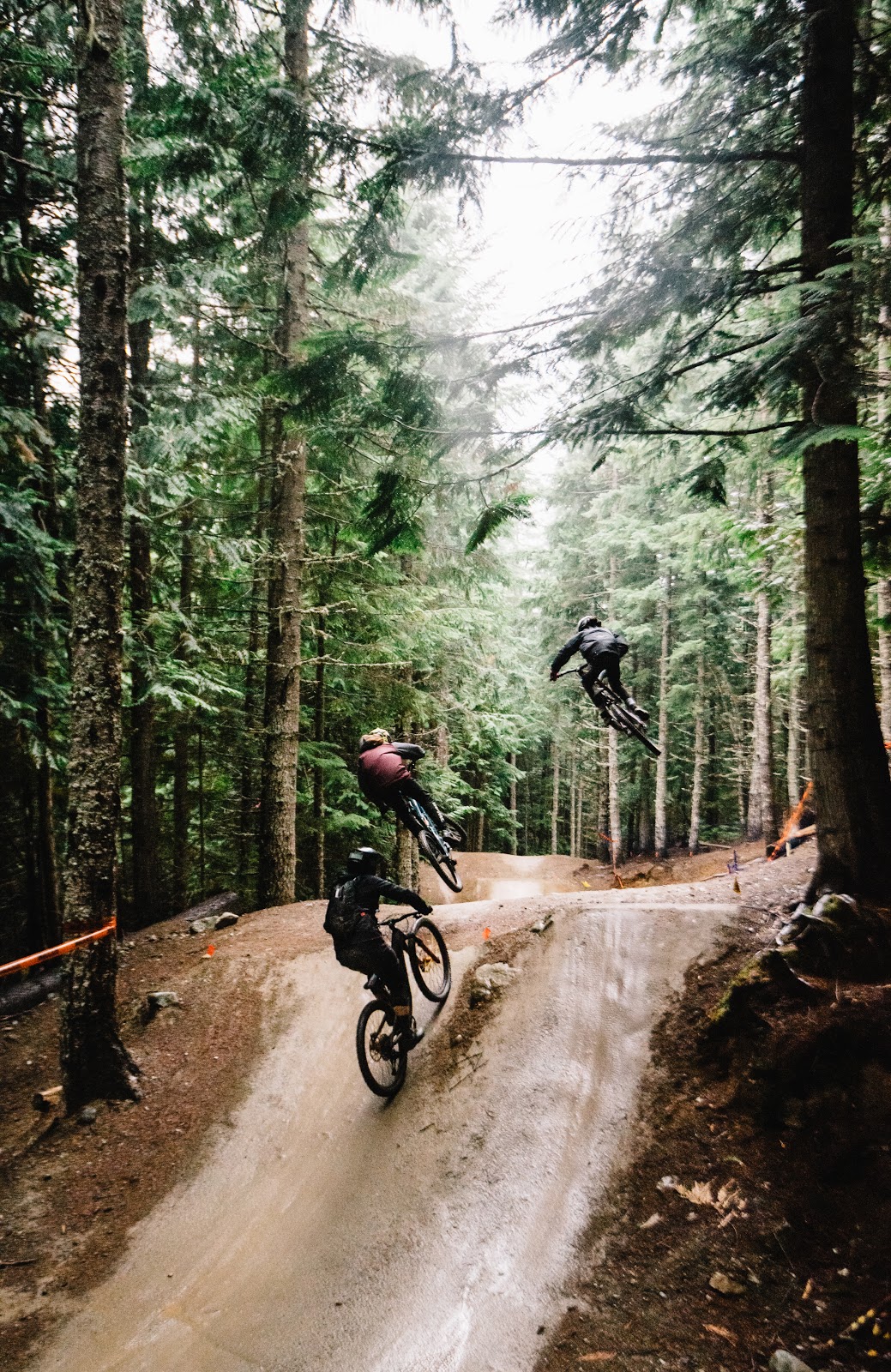 All in all, the Deep Summer Photo Challenge was a whirlwind experience. It gave me the chance to peel back a whole new layer to the Whistler Valley in a creative way. There were hiccups here and there, but that was all part of the fun. And now that I’ve caught up on sleep, I’d definitely give the contest another whirl. Be sure to check out the final result below!