It's hard to imagine that anyone that rides bikes hasn't heard about Bentonville, AR at this point. From hosting Outerbike, to countless articles from Pinkbike, Outside, and just about every outdoor recreation medium praising their trail networks, it seems like the most unavoidable place in the bike industry at this point. After a few summers of not mustering up a good enough excuse to make it over, Bentonville became the perfect middle point from Angel Fire as it is from Johnson City, which made it the ideal meeting place to swap our daughter off for her month with her mom back in Tennessee. 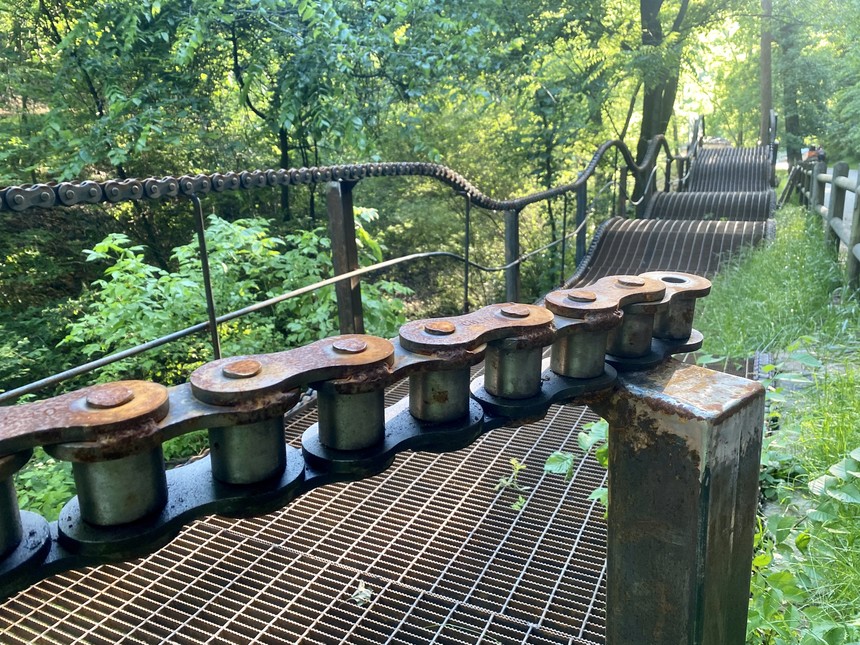 The plan was to leave Angel Fire on Thursday morning, and arrive at the AirB&B that evening so that we could ride the Coler Preserve area. Unfortunately, about 5 hours into the drive I felt the Aura's of a migraine coming on while filling up at a gas station. I panicked and took 1000mg of Ibuprofen an empty stomach. Between the headache itself and the Ibuprofen now in my system, Olin and I only made it about another 3 hours before we had to stop for the night  unexpectedly. Allie and her dad met Olin and I at a hotel about 180 miles west of Bentonville, and she would drive my car the remainder of the way the following morning.

We left the hotel at 8am on Friday morning to finish the last 3.5 hour leg to Bentonville. It was hot, so hot. We arrived at the AirB&B about noon and unloaded all of our gear. The first thing I like to do when I go to any new place, is go right to the local bike shop. So Allie and I hopped into back into the car and headed over to Mojo Cycles.

I knew I was in love when we pulled in and saw a badass Ford Bronco wrapped with their logo. We headed in to get the lowdown as to what to ride. The original plan was to ride Coler Preserve on Thursday night, Slaughter Pen on Friday, and Back 40 on Saturday. Unfortunately Thursdays sickness really threw that into the swamp. It was hot, so hot, so the guys at Mojo told us our best plan would be to check out the Slaughter Pen trails around 5:30 when this started to cool down. I bought a “B is for Bentonville” book by Buddypegs for Olin and Allie grabbed some chain lube before we set off to get some lunch to bring back to the house. 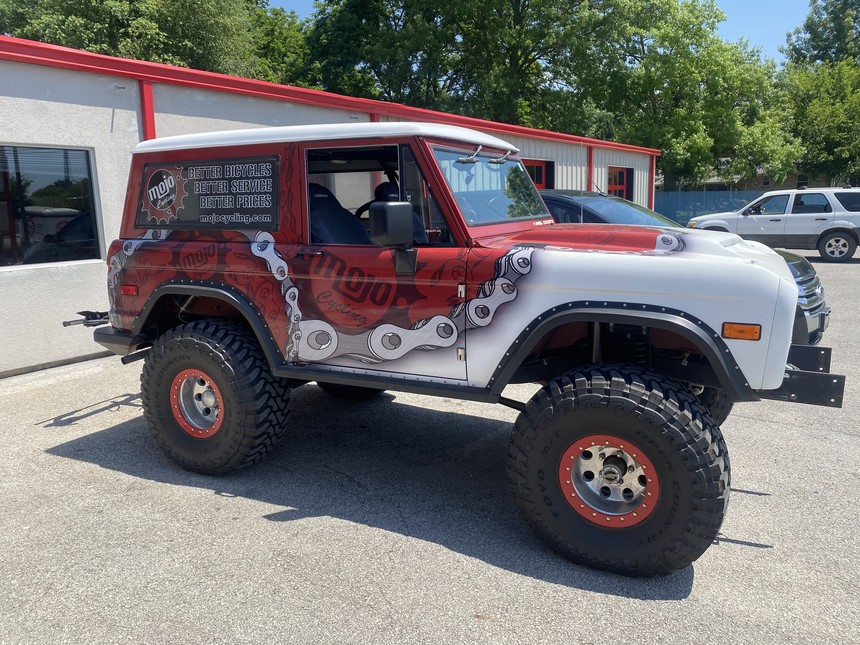 If you’re a mountain biker, the best way I can describe Bentonville is like going to Disney World. Where the average family is arguing over whether to go to Magic Kingdom or Hollywood Studios, a mountain biking couple will have to decide between a Back 40 loop, Sugar Hollow, Slaughter Pen, or Coler Preserve. The amount of riding in each of these zones is mind blowing, and the trails and stash parks that serpentine through the town to each area are even more impressive. The fact that there’s a flow trail that literally parallels the road to take you into town blew my mind.

After a few hours, it finally cooled down to a balmy 90* so we geared up and headed to the Northern most parking for the Slaughterpen Trails. After a quick section of bike path, we were able to hop on the All American trail and finally get on some of that Bentonville dirt. Maybe 30 seconds into the trail I noticed a jump line to my left on the other side of the bike path, so we headed over and got inline to check it out. For me, this is where Bentonvilles secret sauce was. The way the sprinkled little free ride stashes and jump lines between XC loops that are all accessible without the need to get into the car and drive. We kept working our way south and hopped on a Schroeder Train. This was a trail a I had seen videos of a few times and really wanted to check out. The rock gap jumps in addition to wood bridges and a few tech sections made for an awesome little bike park feel. 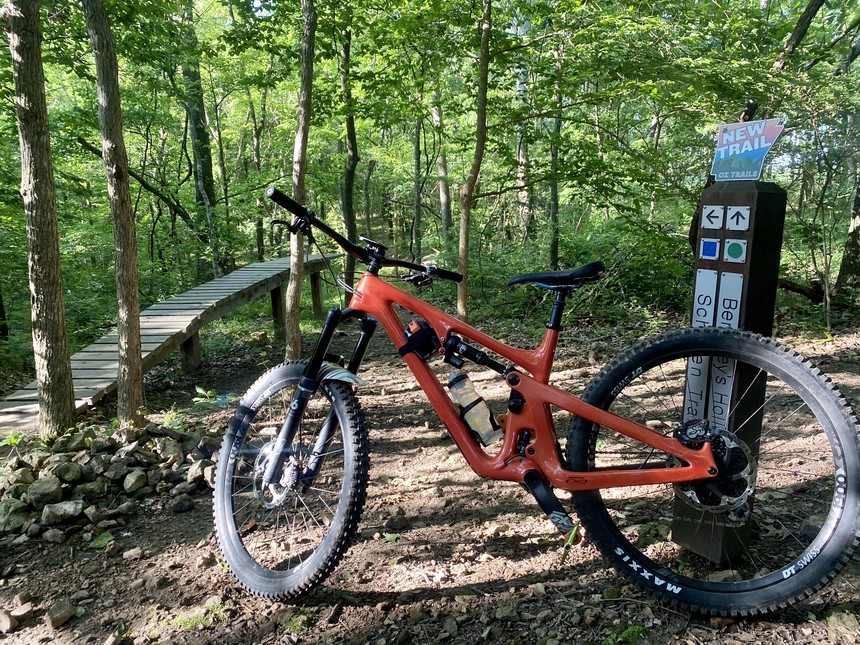 From there we made our way down to BooBoo, Another little section of flow trail with rock drops & ChooChoo, a fast bermy descent. We finished the ride by checking out the drop zone before connecting Tatamagouche to Medusa, 2 awesome single track sections. Medusa finished at the top of the Downhill Connector, and this is where my mind was really blown. The rock gap to 20ft wallride, followed by a toilet bowl berm in which you then rode under the same feature was not something I expected. The germs and jumps on this trail were some of the smoothest I’ve ever ridden and the jumps had almost no tendency to buck, they were absolutely smooth senders that I really felt comfortable with letting it rip off of. 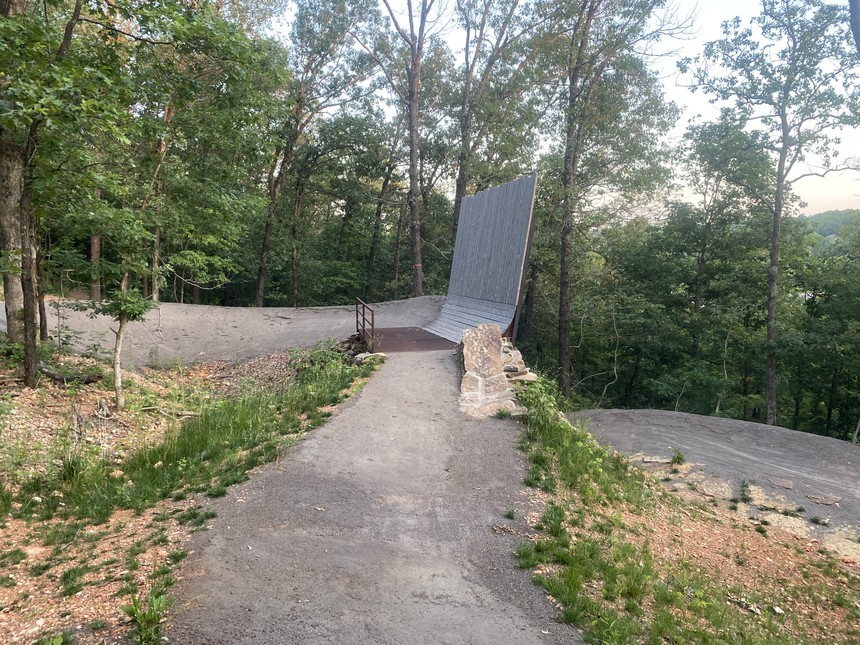 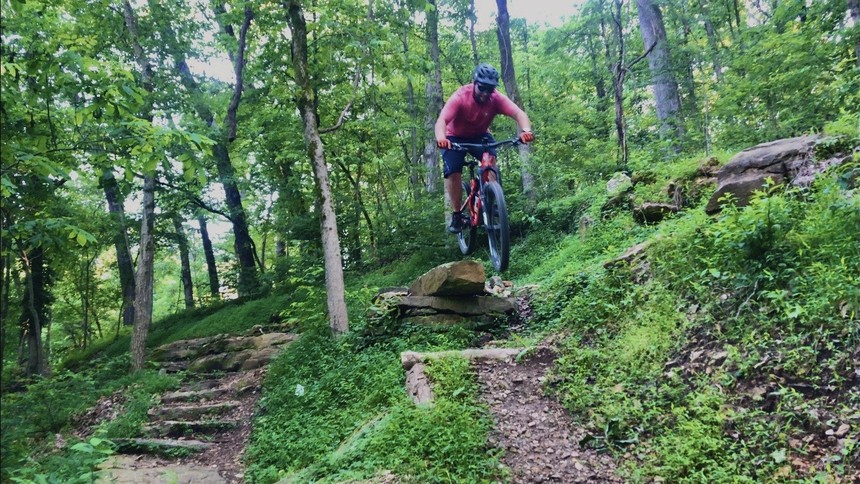 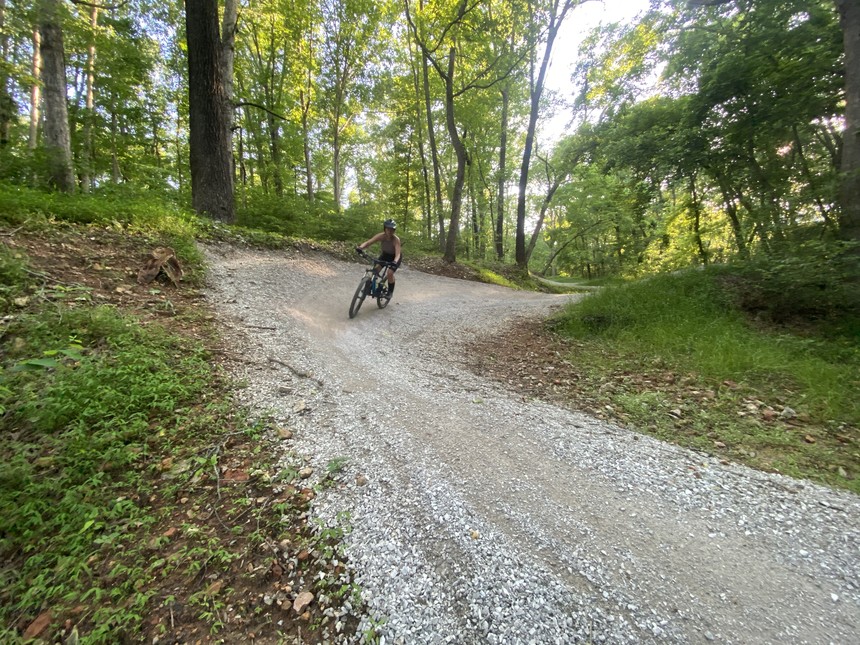 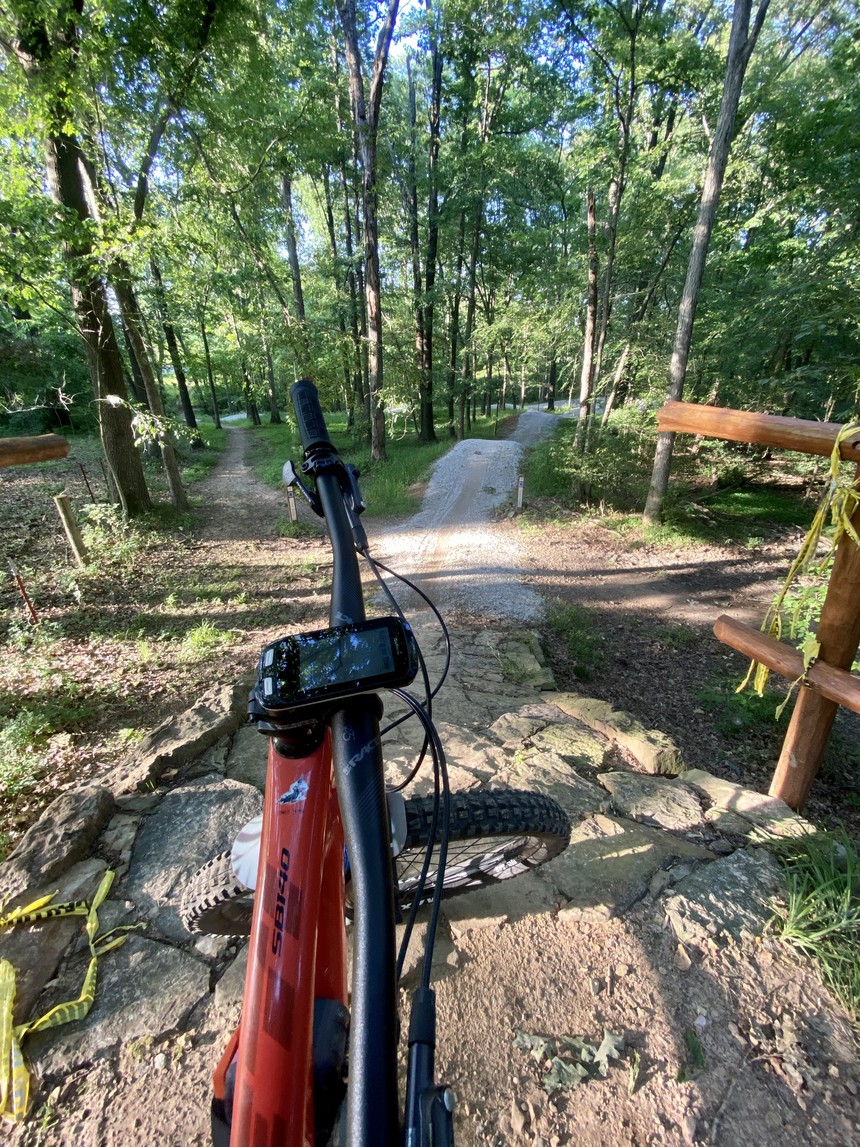 After about 2hours and 11 miles later, it finally cooled off to 85*. We felt that we received enough bang for our buck and headed back to the house for the night. 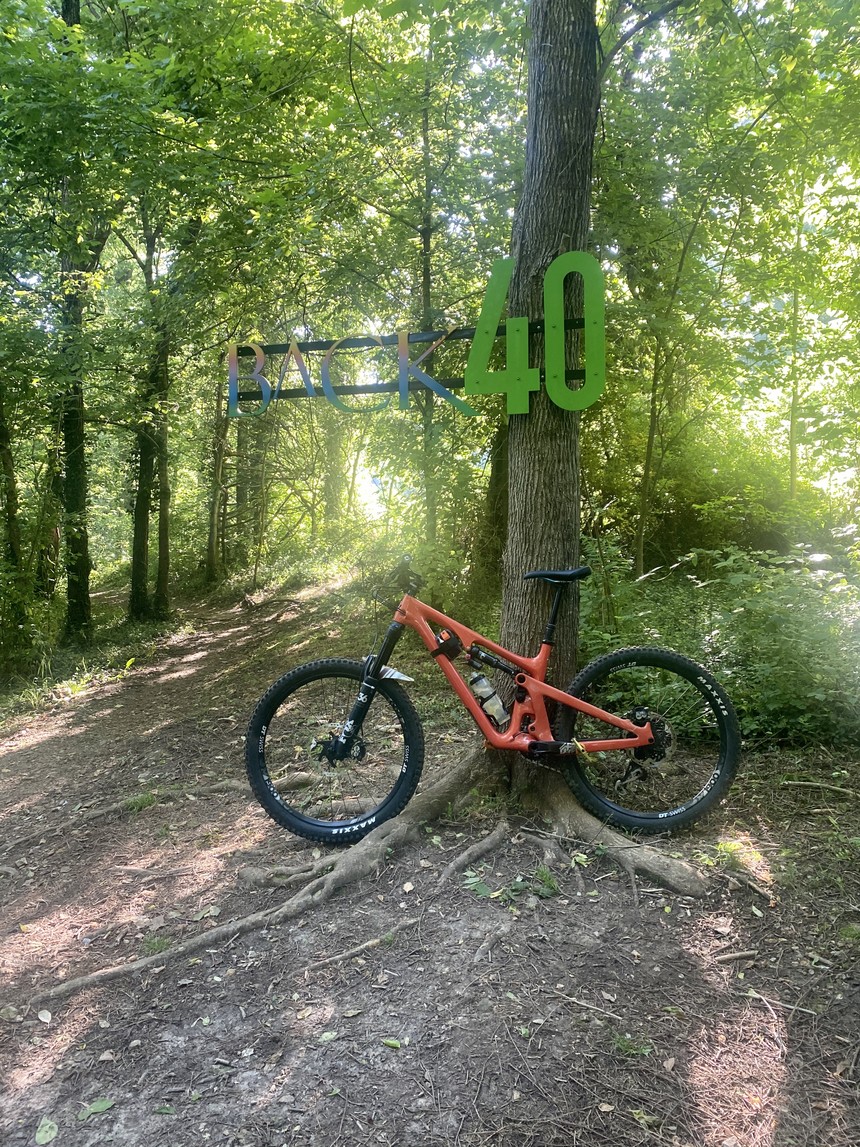 The guys at Mojo told us that if we were going to ride the Back 40, we had to start at Blowing Springs loop, and finish there too, as that was where the heart of Bentonville really was. We were at the trail head at 7:30 on Saturday morning and stoked to tackle a 15 mile ride in the 90* heat. The Blowing Springs section of trail offered some old school feeling single track with a healthy mix of rock drops and tacky dirt. This was a great little 2 mile section that got us on the Back 40 trail which would we use to get to The Ledges. 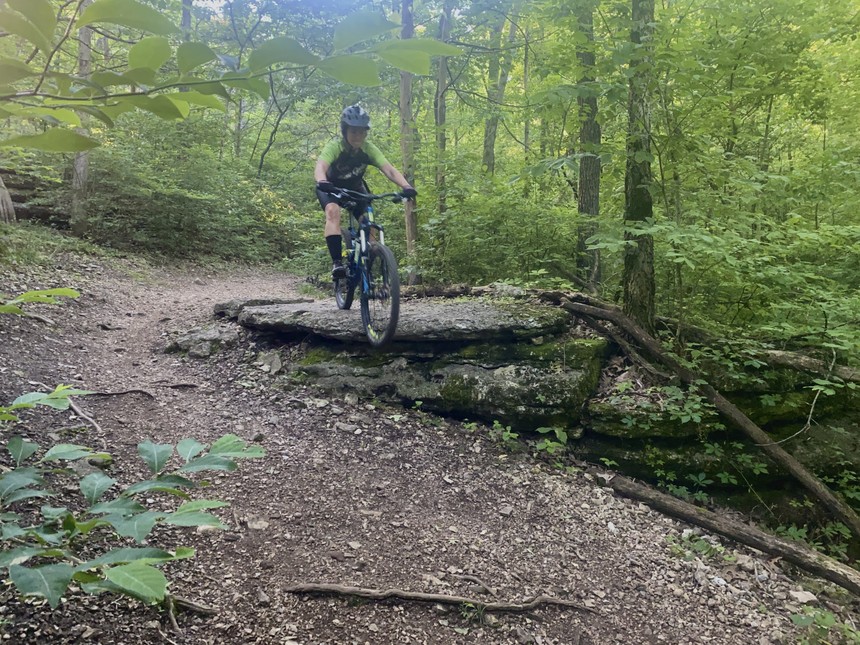 What really stood out to me was the half mile section when we were literally on a golf course. In Marquette we had a trail that paralleled a golf course, but the fact that for a few minutes we not only were on the greens, but crossing a cart path was pretty cool. There can’t be too many other trails in the country where that happens, the thought of even pitching that idea to a golf course almost triggered another anxiety induced migraine right there. Serious props to whomever got the green light on that. 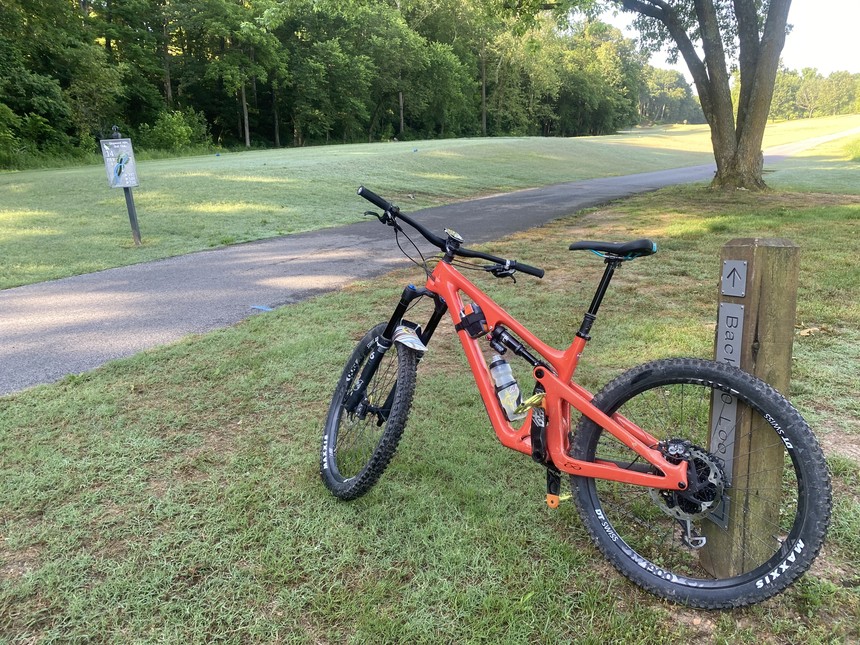 The Ledges section offered some awesome wet rock sections of trails that made me feel like we were riding in Tennessee again. We hopped on Pinyon Creek and took that to Summit School which was a nice little single track section looping us back to the Back 40 trail. It was getting pretty hot by this point and I have never sweated as much as I did the last 2 miles on Back 40.All in all we did 15 miles with over 1300 ft of climbing which I have to say is impressive. That’s pretty comparable to a day of XC riding in New Mexico, to get that amount of vert in Arkansas was unexpected but welcomed, especially because we weren’t at 8000ft. 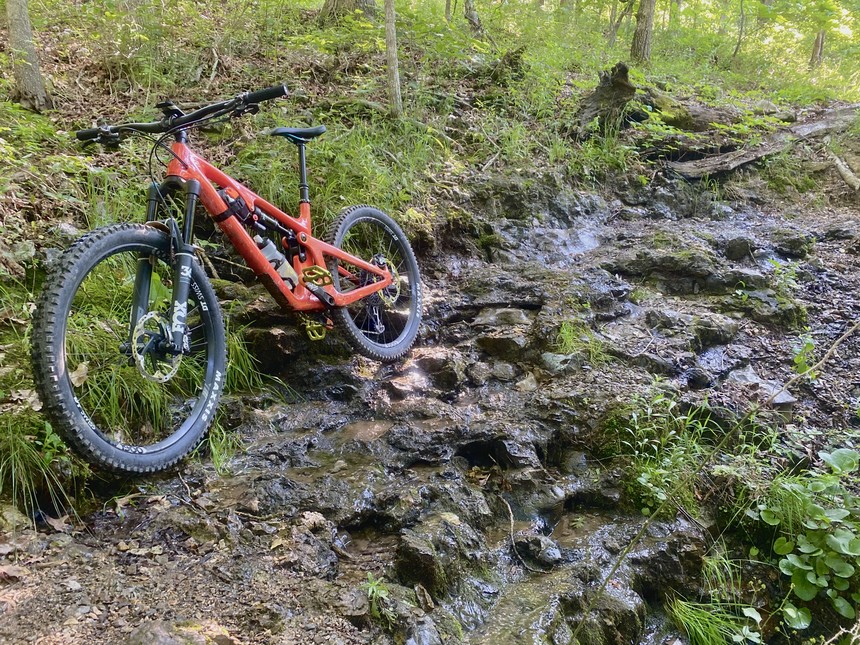 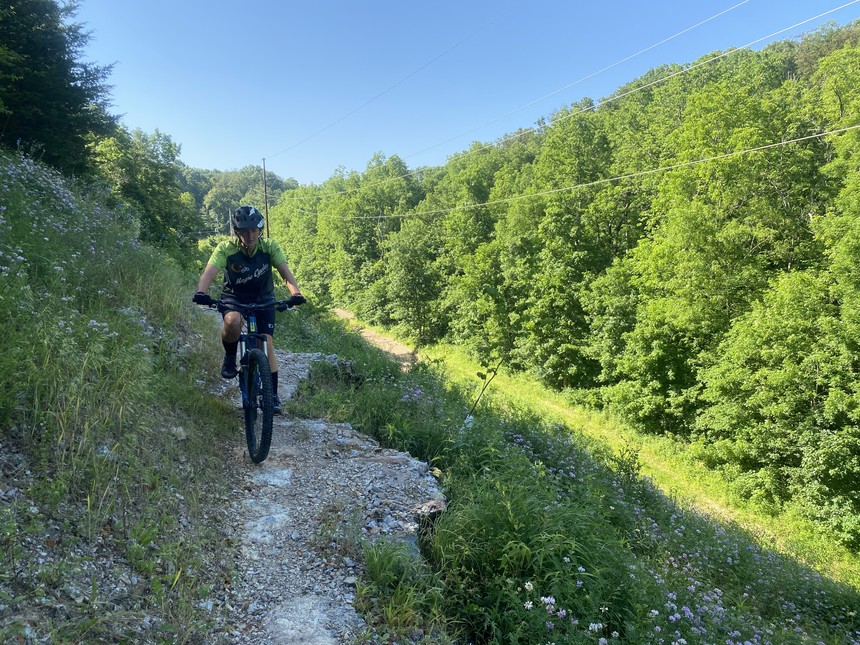 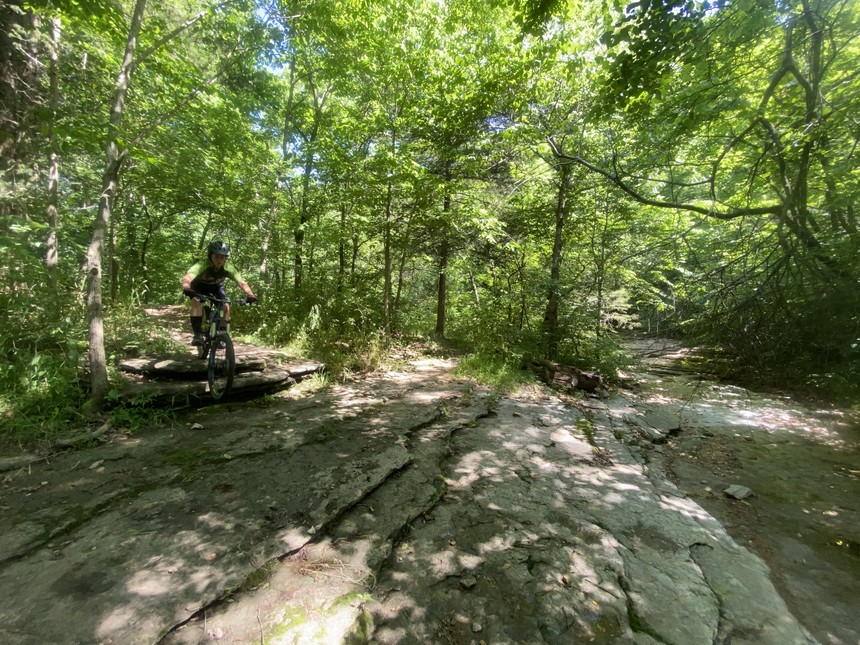 We headed to the house and took showers, then took Olin downtown for the obligatory photo in front of Walton’s. Without this family, these trails would not be here. Whatever personal feelings you may have regarding Wal Mart, set those aside for a minute because this family is truly dedicated to not only building trails in their community, but really providing a sense of place for the region. 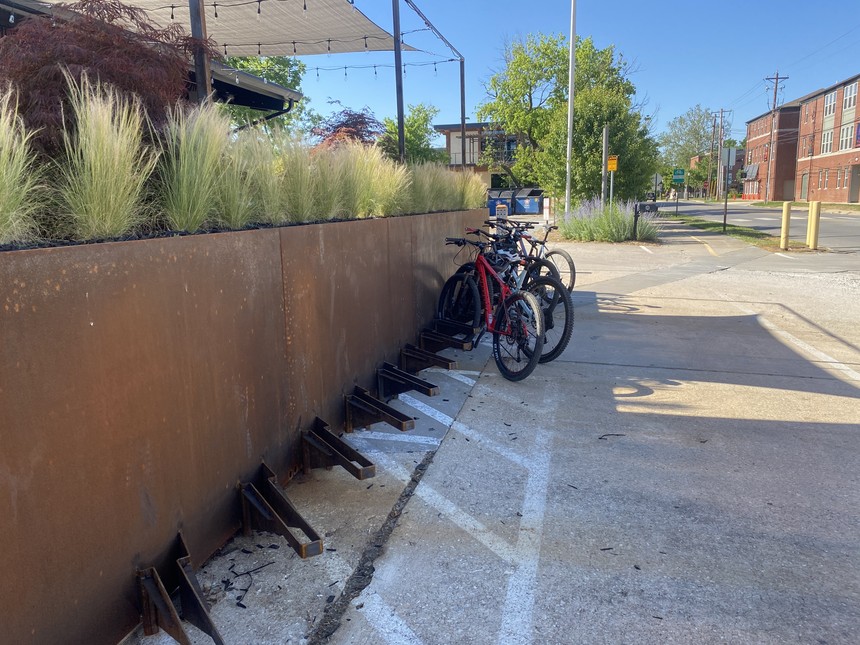 We made one final stop that evening at The Hub Bike Lounge which was hole to a brewery and a cool little boutique bike shop. It was far too hot for my Michigan raised body to sit on the porch and drink a beer, so I grabbed a six pack of their DRTSRFR IPA to enjoy while I wrote this from my comfortable, 65* living room in New Mexico. 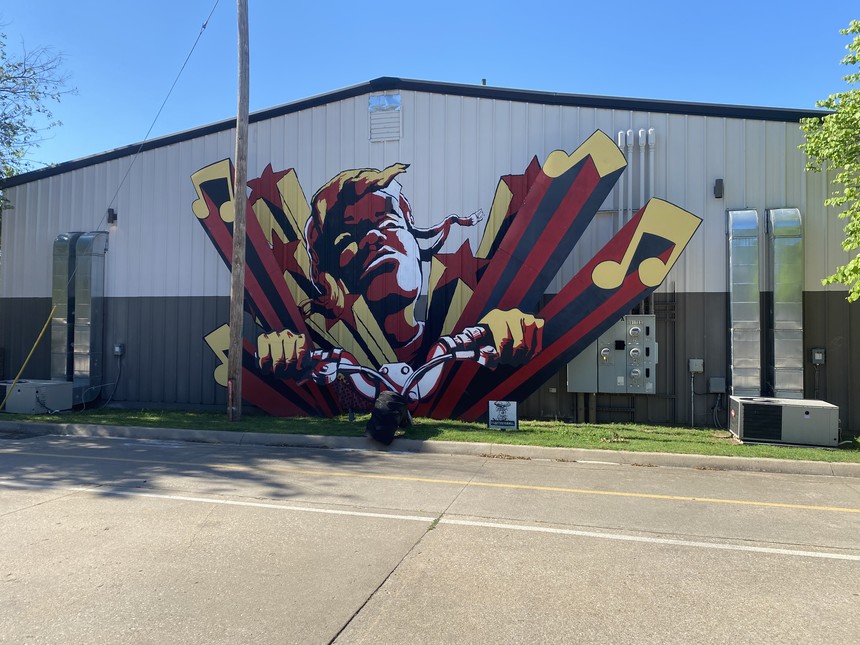 We’ll be swapping of Olin again in early July, and the plan will be to get to Coler Preserve, Sugar Hollow, and possibly Eureka Springs. 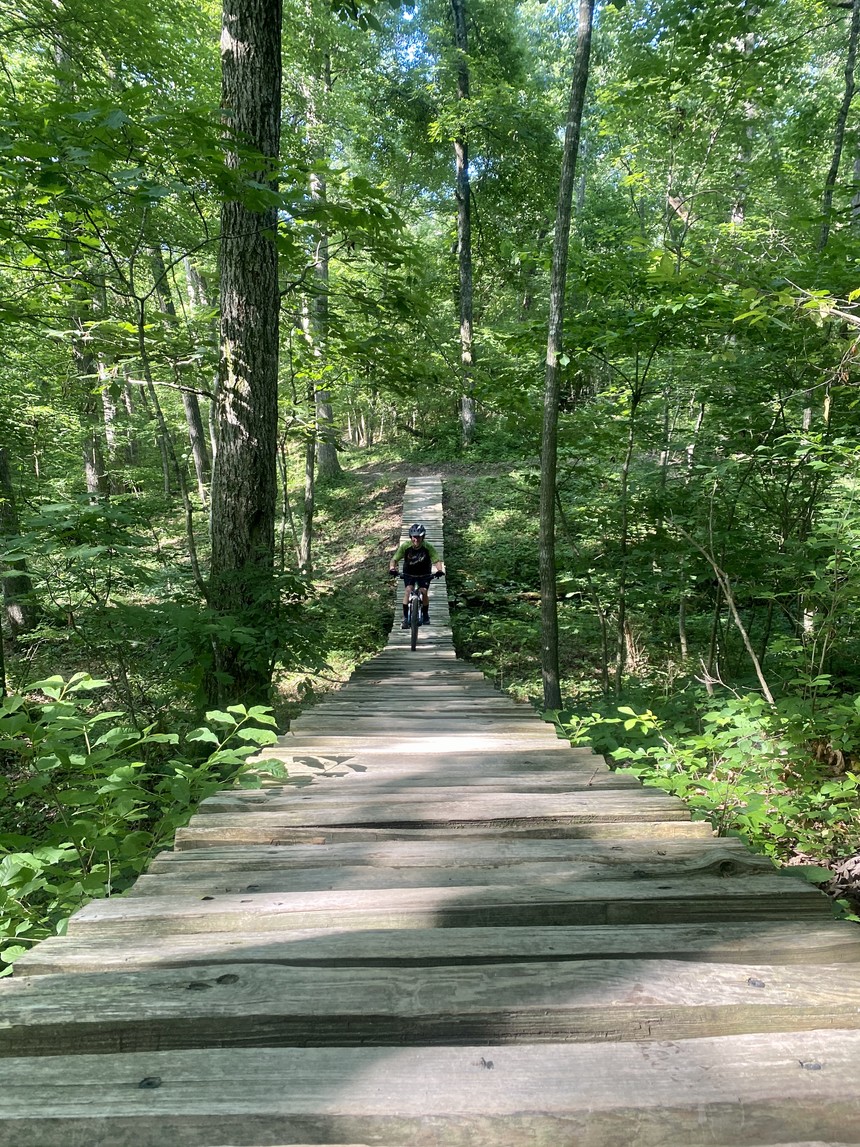 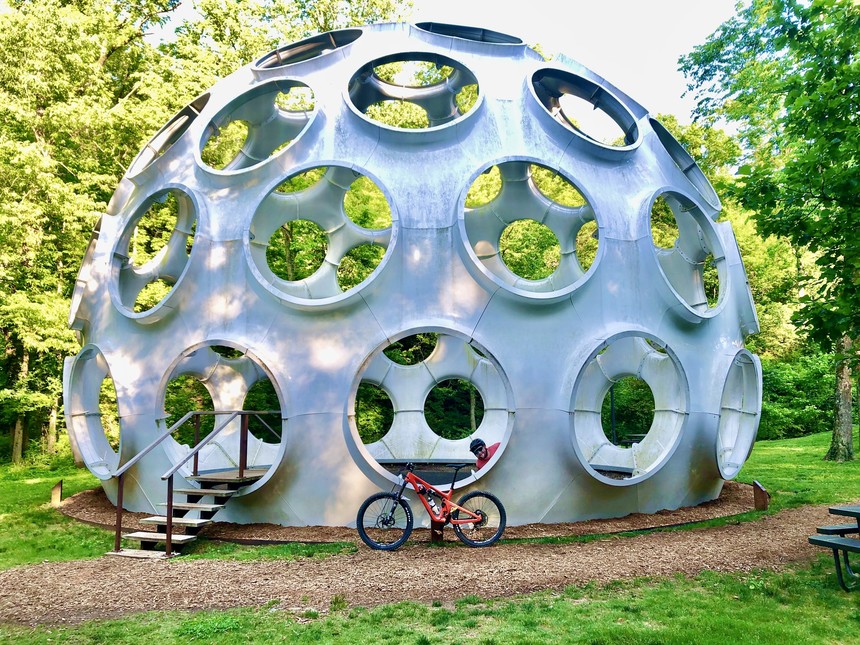 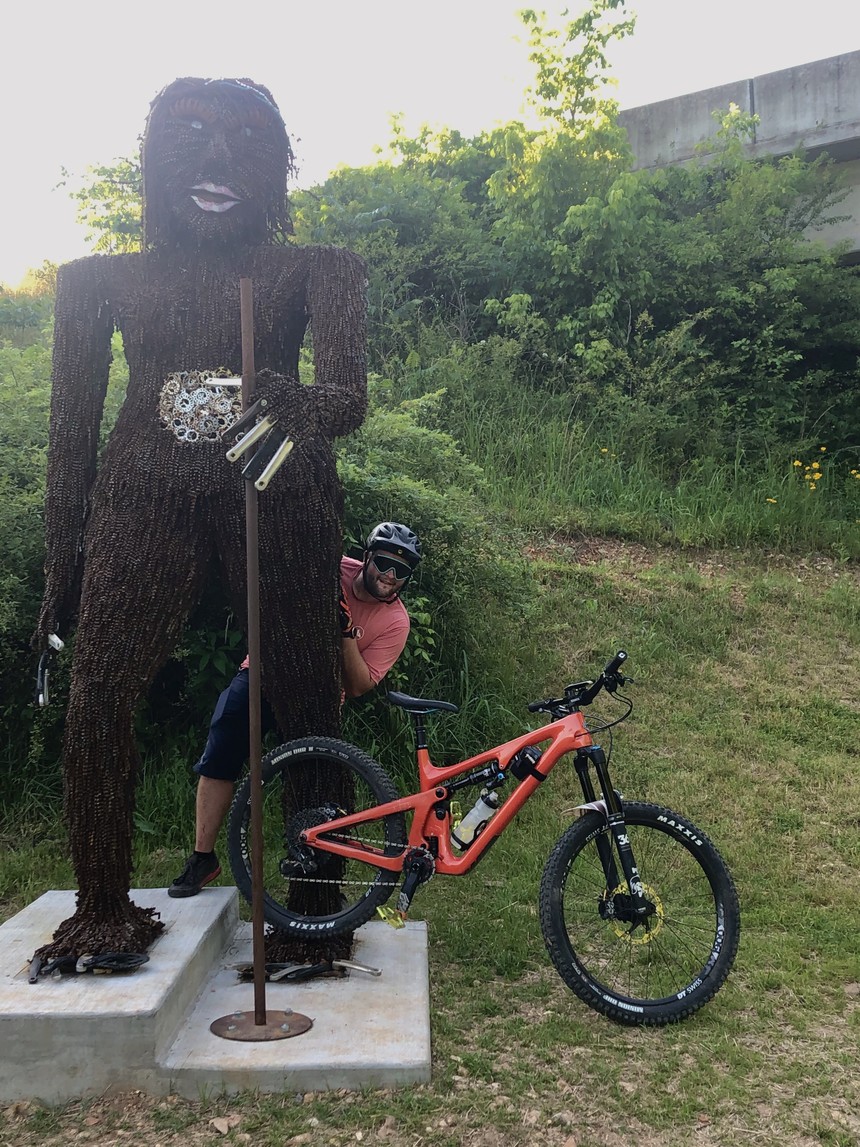 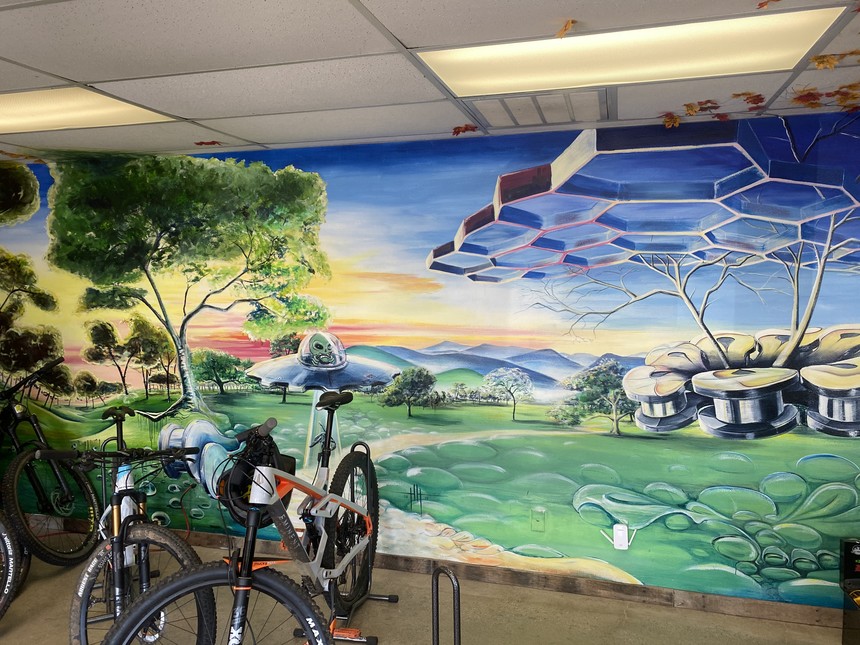 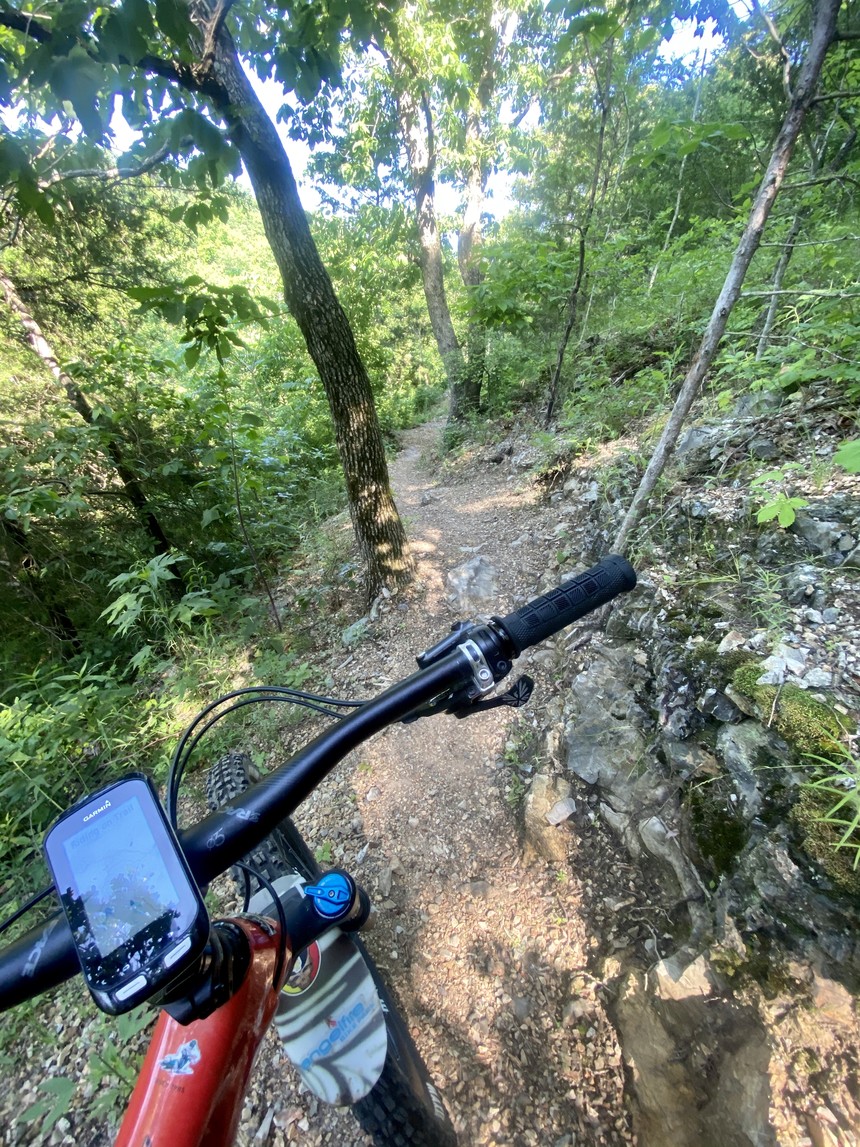 Red Bull Formation Is Back, Dropping this May

Red Bull Formation Is Back, Dropping this May

Red Bull Formation is back and it's going to be bigger and better. Katie Lozancich photo. The most highly anticipated women’s freeride mountain bike event is returning to the Utah desert on May 24th-31st. Following in the same format as the first Formation back in 2019, the event will be a big-mountain progression session, bringing together the industry’s most promising talent to push women’s freeride onwards. The event’s goal is to further develop the women’s freeride scene, and