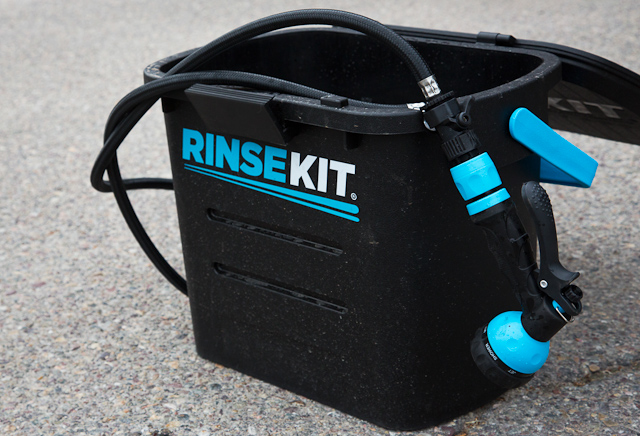 A self-pressurizing, portable hose system for the daunting and dirty. Jon Grinney photo.

We here at TGR get pitched with all kinds of random “non-core” products that manufacturers want coverage of. Highlights have include beanies with their own beards, mittens custom-tailored for smokers, and skateboards made of bulletproof glass. We delete most of these emails, but when a pitch came for the RinseKit­–a portable, pressurized hose system that requires no batteries, no plugs, and no motors of any kind–we thought we’d give it a whirl and see if it would wash mud off our bikes. 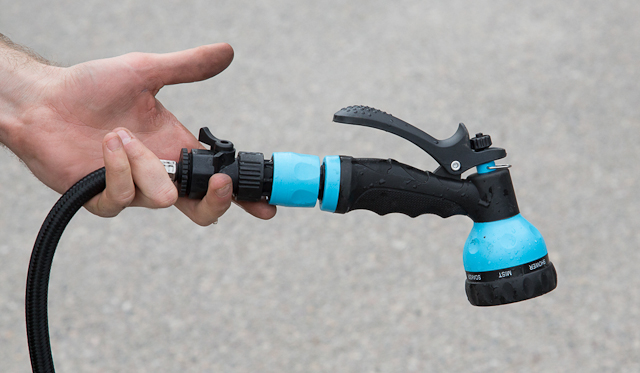 Choose from one of seven spray settings, from the sensual "full shower" to the mud-clearing "jet" setting. Jon Grinney photo.

The RinseKit is a pretty simple, ingenious idea: screw one end into a standard water spigot, turn it on full blast for 20-30 seconds, and water fills a two-gallon chamber that pressurizes itself using just the pressure of the spigot. RinseKit claims the water, which then sits in a box the size and weight of a small cooler and which is durable enough to be stood and stomped on, sits pressurized at 65 psi. It sounds like something you’d see on an infomercial, but given how many people responded by saying “Cool!” when we showed the black box with the hose on it, we figured this was not just another ShamWow. 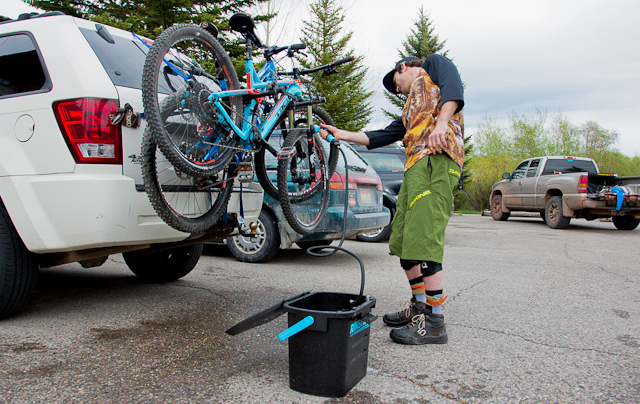 We put this to use mostly to shed our bikes of spring mud, but surfers will get a lot out of having a portable shower to hose down themselves and their wetsuits after a salty session. Using the attached nozzle’s most powerful of its seven settings, the narrow-stream “jet” mode, we were able to get about a minute’s worth of high pressure water, with a few minutes more of a less powerful blast.

All in all, we were able to give two bikes a decent washing after each ride; not the same result as having a stronger garden hose with more power and infinite supply, but certainly enough to be impressed. 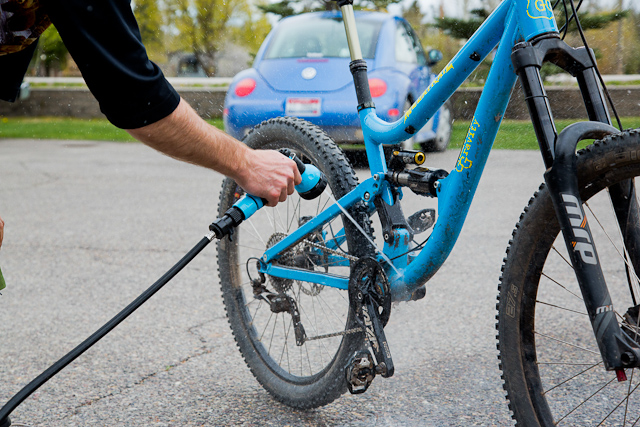 The most powerful "jet" setting was ideal for hosing down bikes. Jon Grinney photo.

While you could imagine something similar coming out of a Sharper Image catalog and costing $800, the RinseKit retails for about $90. Given the simplicity, durability, and performance of the kit, we feel pretty comfortable saying the price is justified. While mountain bikers looking to zap every lick of dirt off their favorite toy might bring the RinseKit to the edge of its performance, folks who don’t require maximum water pressure–for rinsing off after a surf, or for hosing the dogs down after a romp in the woods–will be stoked. We could see urban dwellers who don't have garage space and can't be bringing back muddy gear to their apartments getting a lot out of this system as well. Mahalo!