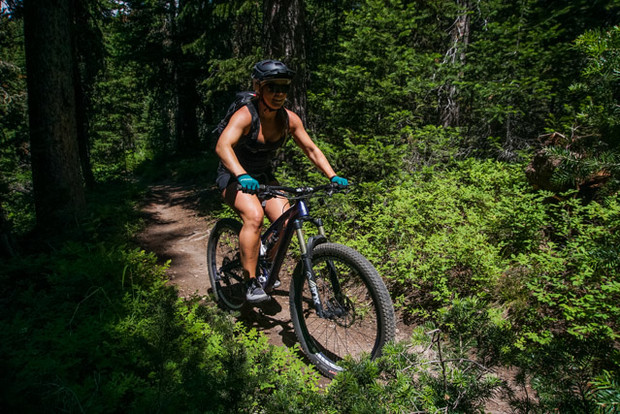 What the deal is, and who stands to benefit, from mountain biking's sort-of-fat-ish wheel size. Ryan Dunfee photo.

If you have engaged with the biking portion of our small corner of the internet universe this past year, or consumed much bike media at all, you’ve have seen all the marketing rage over plus bikes. Just a touch – maybe at most, three quarters of an inch – wider than your regular mountain bike tires, plus tires, mostly mounted on a 27.5” rim, introduced some of the ground-sopping traction of 4-5” fat bike tires, which have been around a bit longer, but with handling that more closely resembles that of the bikes we’re used to riding.

Since their introduction, they’ve been perhaps the most flexible new technology in the bike world, and have shown up on everything from beginner hardtails to expert-oriented enduro bikes with 160mm of travel, and can even, in some instances, be ridden on the same bike with the same rims as a slimmer, "normal” tire.

For the many who’ve yet to try a bike with the plumper wheels, the huge diversity in applications has made it hard to understand what exactly they’re good for. 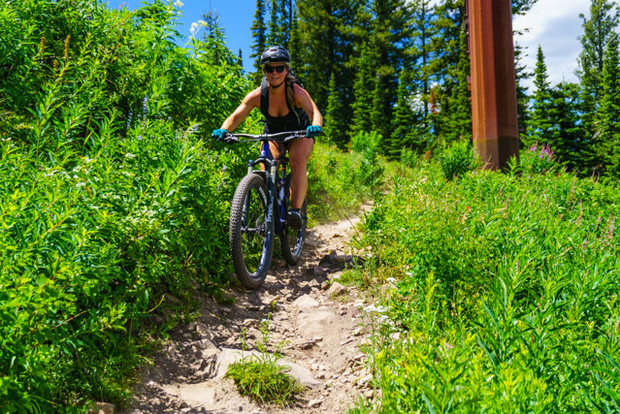 True novices stand the most to gain from plus tires. Ryan Dunfee photo.

The first and most obvious group of riders who stand to benefit from plus bikes, wheels, and tires are rapt beginners. While it’s not hard to get someone up and running on trails resembling a dirt highway, once technical sections – ya know, roots and rocks, the kind of stuff that comes into play on mountain bike trails – come into play, the learning curve tends to slows way down. But because you’re able to run so much lower of a tire pressure on a 2.8-3.25” tire compared to your normal 2.2-2.5”one, the tires are softer, and mold around those rooty bits instead of bouncing off of them, offering noticeably more traction on bumpy climbs while also deflecting side-to-side less on technical descents. They are also, on their own, a bit of suspension, and tend to calm down the feel of a ride on rocky trails. 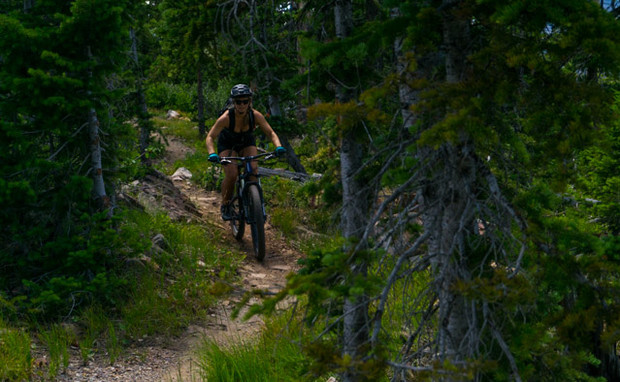 The progress my fiancee made in a few short rides on Diamondback's new plus bike, the Catch, was truly incredible. Ryan Dunfee photo.

By tacking in a straight line more naturally and smoothly, even despite technical junk on the trail, plus bikes are a boon to newer riders who’d otherwise tighten up, slow down, or come to a stop altogether when the trail starts to get a little rough. I had my fiancée on one – Diamondback’s Catch plus bike, with their new Level Link suspension and 3.0” Kenda tires – all summer and, being a fit but not always confident rider, I was blown away with her progress over the course of just a few short rides.

She was motoring descents, flowing through rock gardens, carrying more speed in and out of corners, and, thanks to the extra tire on the ground, cleaning technical climbs that required my best riding. It was clear that the predictability of the Catch’s tracking as it came down the trail, and all its extra grip, was pushing her confidence to an entirely different level.

It’d be really easy to see a plus-sized hardtail becoming the de facto beginner bike, as not only would you get the all the across-the-board benefits of a plus tire, but you’re able to give a novice a little bit of the feel of full suspension without making them pay for it. Of course, this would require shops giving their customers a serious education on proper tire pressure, which is absolutely the most critical factor in getting the most out of these new bikes.

Adding or dropping just 1 psi – something really hard to suss out with a standard floor pump – makes a significant difference in ride feel and whether or not you’re at that perfect junction of a tire supple enough to provide the traction and smooth ride that plus tires promise, but not so soft that the tire’s going to flex unpredictably in corners or falter in preventing a ding on your rim when coming through the rocky bits. 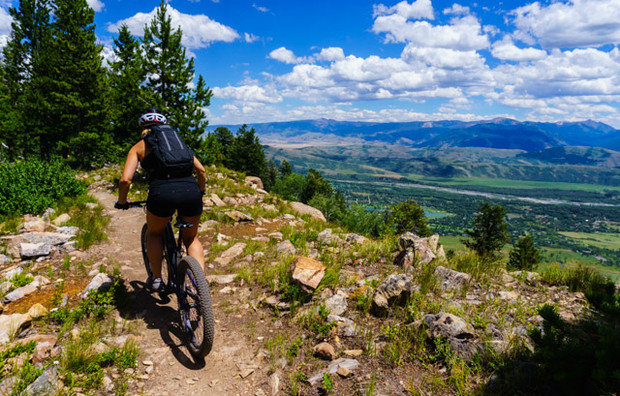 With extra grip and a smoother ride with less deflection, plus bike technology will do for beginners what rockered skis have done for novice skiers. Ryan Dunfee photo.

Like rockered skis that have helped thousands of beginner skiers more easily initiate turns, I’m hopeful that plus bikes will keep more first-timers keeping at it, avoiding some of those terrifying, exasperatingly unpredictable first instances in technical terrain that turn so many folks away after their first outing on the trail. 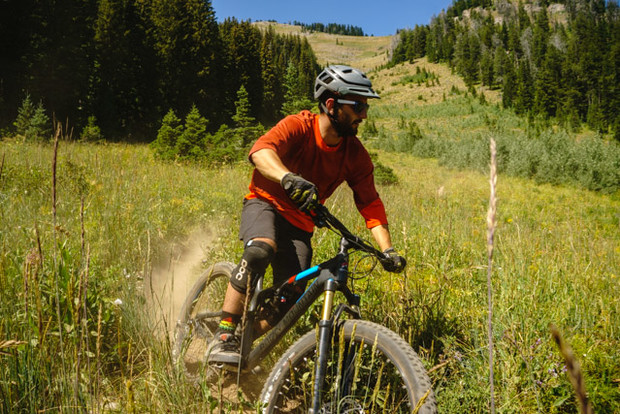 But novices are not the only folk who are getting something out of the latest macro bike tech trend. Many popular trail frames are coming out to be simultaneously friendly to regular 29” wheels and 27.5”+ ones, and many brands are nailing the design to provide rides that are just outrageously fun.

Rocky Mountain’s Pipeline, for example, runs on Maxxis’ skinnier 2.7” Rekon tires, which feel more like regular tires, with a beautiful grip when wanted and predictable drift when really laid down in corners, and still stiff enough to push as hard out of bermed corners as a Minion. Yet the extra width and lower pressures mean that, when taken down the blown-out former horse trail known as Phillips Canyon up in Jackson, with innumerable unforgiving rock gardens, the Pipeline tracked straighter and with less deflection than a normal bike, providing that noticeable step up in predictability without feeling anything like a bulbous fat bike tire. 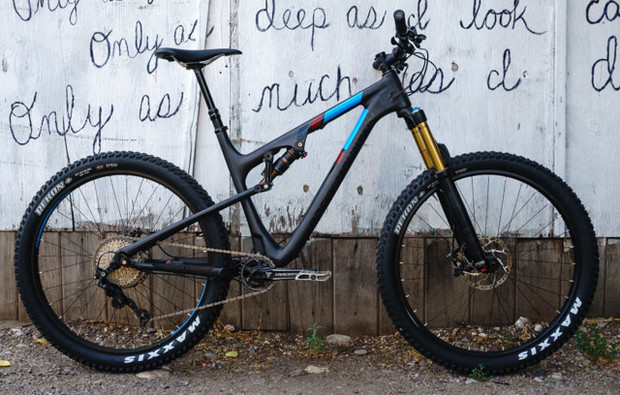 The Pipeline is a hell of a fun bike that just happens to have plus tires. Ryan Dunfee photo.

Outside of its tires, the bike is just so goddamn fun to ride. Yes, you get the calm increase in climbing traction and comfort like with any plus bike, but the descending was a complete riot. Insanely playful and poppy, I spent half the ride in the air just inventing trail gaps I had never quite considered before, and when turned into a whip, the bike was facing fully sideways before I even knew what happened.

On a rough trail like Phillips Canyon, the feel of this more aggressively-designed plus bike, with wheels on the skinnier end of the plus spectrum, was addicting. Incredibly, my Stravasshole record shown that I’d PR’ed the entire bottom half of the trail, so speed can’t be cited as a limiting factor for these squatter tires.

This was the kind of bike I wish I’d grown up riding back in New England, whose endless churn of rocks and roots both up and down would really be served well by tires that deflected less, had more grip on bumpy climbs, and for the love of my tailbone, simply felt less jarring. 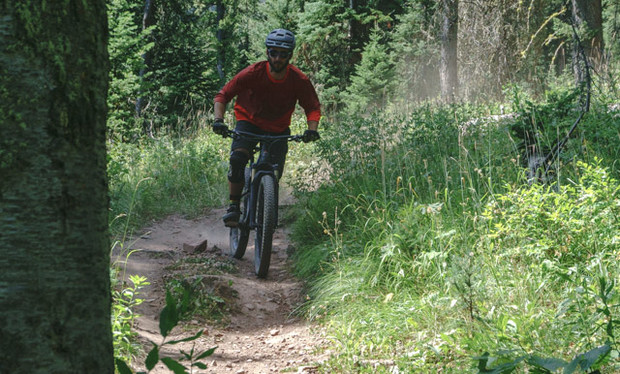 Taking the edge off of nasty trails, plus bikes are something I wish I could have grown up with in the endless tech of New England. Ryan Dunfee photo.

As it stands now, the limiting factor with plus bikes for more experienced riders is the tougher balance between weight and durability that manufacturers have to pull out the Abacus to arrive at. In order to keep the rolling speed of the bigger plus tires reasonable, you gotta cut some weight, but slimming the walls of the tires down to do so leaves them more susceptible to big tears from sharp rocks. It’s no doubt going to be a design problem all those professional bike nerds with engineering degrees will be spending Monday through Friday trying to figure out. Until then, they’ll be bikes that, as Rocky Mountain’s Brian Park put it, “can turn it up to 10… just not to 11.” 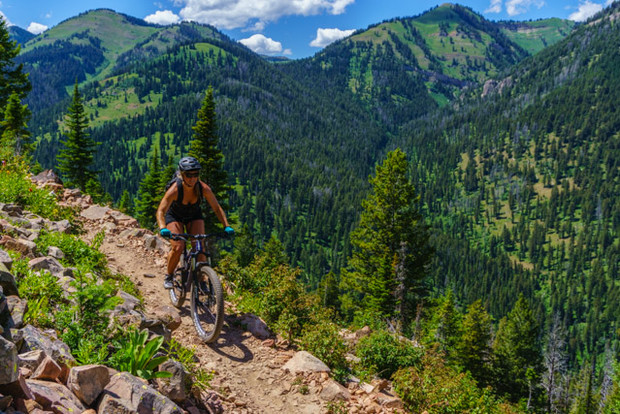 Killer for beginners and fun as hell for everyone, you should really give plus a chance. Ryan Dunfee photo.

Having appeared on so many different bikes since they were introduced, plus tires have been hard to understand for folks who haven’t tried them. But, if you haven’t had a chance to experience them – especially at the right tire pressure – you really should. The feel, especially of the narrower versions, is so close to that of a regularly-tired bike, while still offering significant boosts in traction, that super expert bras and bros should give up raising their noses at them. Really, really fun bikes are coming out with these wheels.

However, expert riders don’t really need any help having fun these days. As long as they have bank accounts deep enough to bail out Venezuela, there’s fifty million ways to spoil themselves splendidly riding a bike(s) these days. The real winners, as was mentioned earlier, are beginners. Plus wheels calm the trail down, boost the traction, and make hay of technical sections whether you’re coming up or going down. Any of us who’ve had a frustrating time getting a friend, mom, dad, or spouse into the sport should rejoice.

View All
Sign in to comment
tags: Jackson, WY, United States | wheels |tires |the goods |plus bike |plus

The formation team celebrate after an incredible week of learning and riding in the desert. Katie Lozancich Photo. There have been numerous calls for a women’s Rampage, but to progress women’s freeride the industry needs to think beyond just a singular event. They need to build a community. So following the 2018 Red Rampage event, a group gathered to discuss the future of women’s freeriding. It was clear that lone wolves like Casey Brown existed and were fighting hard for their seat at

It’s been a ground-breaking year for Hannah Bergemann. After an incredible performance at Red Bull’s Formation last fall, things simply snowballed for Hannah B. She became a full-time media athlete and racer for Transition bikes and even traveled all the way to India with a TGR production crew to film a segment for . Bergemann recently sat down with the Hangtime Podcast—a new podcast highlighting rad people on bikes—to shed light on her many season highlights. The episode covers