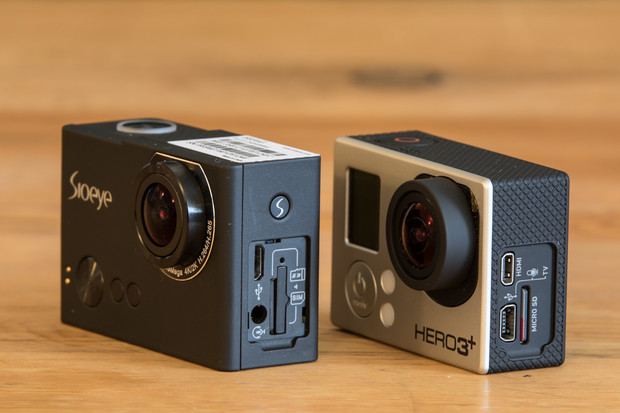 The Sioeye Iris4G action camera offers the functionality of a phone in the form factor of a GoPro, resulting in an action camera that looks virtually identical on the outside while offering the ability to stream your footage, on the go, in real time through a cellular data connection.  There is no denying that Sioeye had a specific form factor in mind when designing this camera.  However, while they look similar on the outside, Sioeye packed their camera with several additional features on the inside.

The marketing appeal of this action camera is that it has a cellular radio built in. So a microSIM card can be inserted to broadcast your gnar directly to followers in real time. Of course, just like a cell phone, this will require a data plan with a mobile provider.  If the thought of adding another device to your cell plan is a deterrent, know that there are prepaid plans out there with no commitment or monthly fees.  If even that's not good enough, there is a way to live stream without paying for an additional mobile plan at all. More on that later. 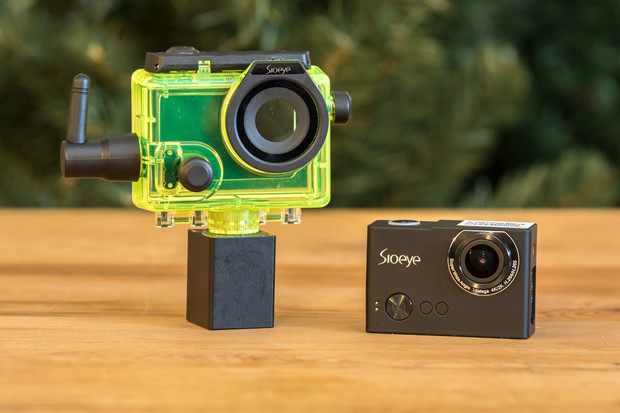 When thinking of this camera, think of a phone running Android. The hardware features include Bluetooth, WiFi, GPS, microSD, microSIM LTE-FDD/WCDMA, 2" LCD screen, 1160mAh battery, and a mic input jack. The camera shoots 4k @ 30fps and 1080p @ up to 120fps.

Just for the hardware alone, the camera is a decent value at $429 , which is comparable to GoPro's current 4k camera at $499.

I have a GoPro Hero 3+ with an assortment of mounts. The GoPro mounts seem to be compatible with the Sioeye camera, which is a plus. 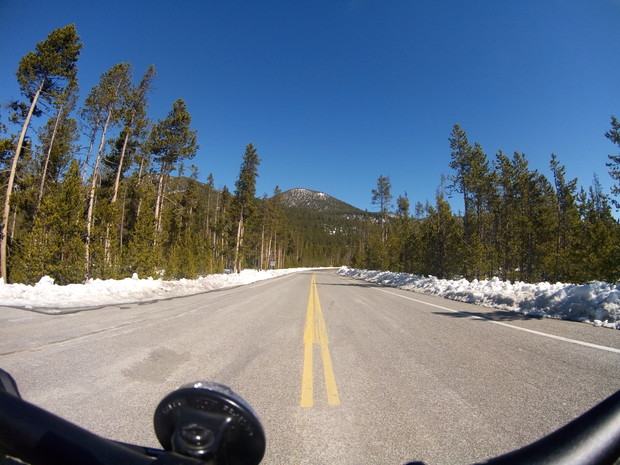 Sample image taken with the Sioeye. 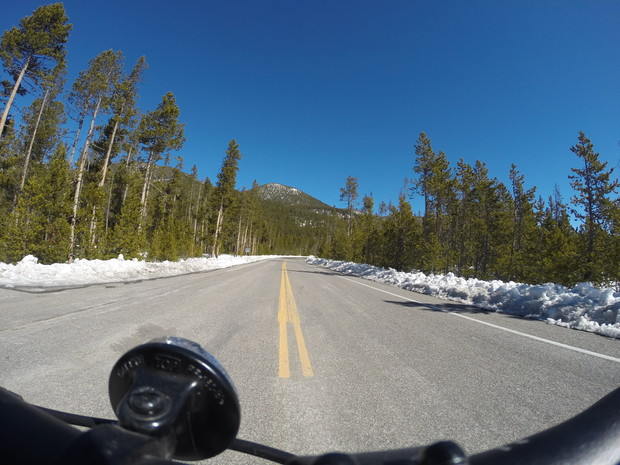 Sample image taken with the GoPro.

Zooming in 1:1, I was surprised to see some purple color fringing with the Sioeye camera.  The same is not present in my GoPro image, but it's hard to say if it's a difference in the lens or in-camera processing.  The ISO noise in the sky is about the same in both. 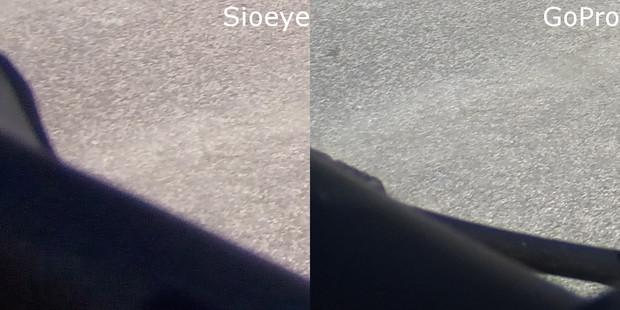 One other hardware feature that is different from a few other action cameras out there is the built-in LCD screen.  Useful? Yes. Battery drain?  Yes. The screen is also more difficult to see in direct sunlight, as expected. 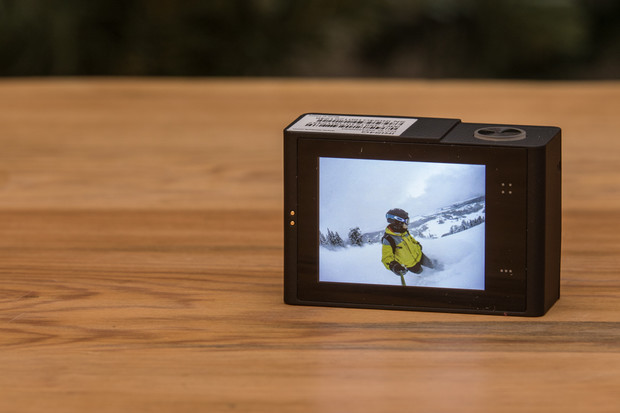 The camera does overheat pretty easily.  I was streaming my drive to work (about 30 minutes), and the camera overheated before I got into town.  The camera was even outside its case at the time, too.

First, let's cover the Sioeye app. It's OK. It's simple in that all you have to do is hit the 'S' button on the side to start streaming.  It's stable and works when in good reception of WiFi or cellular. They run a free streaming service that presents the live feed to followers. Followers can include anyone that uses the Sioeye app, Twitter, or Facebook.

The Sioeye app is a mobile-only and new platform, so I personally don't expect it to grow a huge following overnight.  It's functionally cool but requires widespread adoption in your social circle to be useful.

The Sioeye app also includes the ability to share your live stream to Twitter and Facebook. When enabled, it posts this spammy "watch my feed" message w/ link.  The message is currently not able to be customized, and there is no other way to get this video link other than copying it from one of the automated social posts.

While I might pick on the app a little bit, it's not a huge deal.  Apps get updates, so bugs can be fixed and features improved.  The hardware is solid, which is more important.

The better news is that we are not limited to the Sioeye app.  This thing is a fully functional Android device, complete with the Google Play market.  Almost anything that can be done on a phone is also possible on this action camera.

If you already have a following on  Periscope, now you can broadcast your epic skiing, kayaking, etc. while leaving the phone safely in your pocket or dry bag.

Have some fun with  IP Webcam by dropping this around somewhere to be monitored.

Most of the camera users out there are not going to be using this enough to justify the separate cellular data plan. But in order to live stream, it's not a necessity to have a cell data card in this camera. Most people these days have smart phones with data plans that support tethering. Enable tethering on your phone, and connect the camera to the phone's wireless network. The downside is that you are now draining battery on two separate devices, but it might be better than the extra data charge.

The 2" screen is pretty sweet for swiping photos and hitting quick settings.  The fun ends when anything requires the on-screen keyboard. 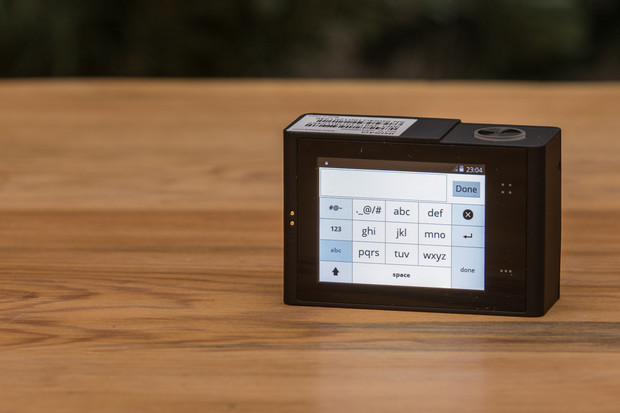 Serious question: who is going to want to follow your adventures live?  In order for live streaming to work, you have to be doing something cool while your followers want to watch something cool.  If you only have a local following and it's a powder day, all your friends are probably going to be on the slopes with you and not interested in a live feed.

On the other hand, if you are competing in a popular event where you want your fans to have a live POV, now we are talking about a potential use case.

The software works pretty well, but it has some quirks that fit it into the early adopters category. Be aware that you might be fiddling with your camera trying to get the cellular radio to connect while your friends are just waiting to drop in. Just like any piece of gear, make sure you are familiar with it before taking it into the field so it doesn't slow you down.

With that in mind, the Sioeye Iris4G is a worthy action camera for the hardware alone, if not the streaming service.  I would recommend this camera for simply recording content in harsh environments, and if there is a reason to live stream once in a while, the camera is ready to handle it!

your account as well as you could alter it from there. Snapchat App which you send out over it have an expiry date.

Backcountry's Mid Mountain 2L Hip Pack is the perfect riding bag for a long day on the bike. Charlotte Percle photo.Product : Backcountry Mid Mountain 2L Hip Pack - $48.96. Find it here. The first time I saw Backcountry's Mid Mountain hip pack, I was a bit perplexed. A lot is going on. It's got all kinds of straps and pockets that you don't typically find on other mountain bike riding packs. Most of my other hip packs resemble sophisticated fanny packs, whereas the design of the Mid