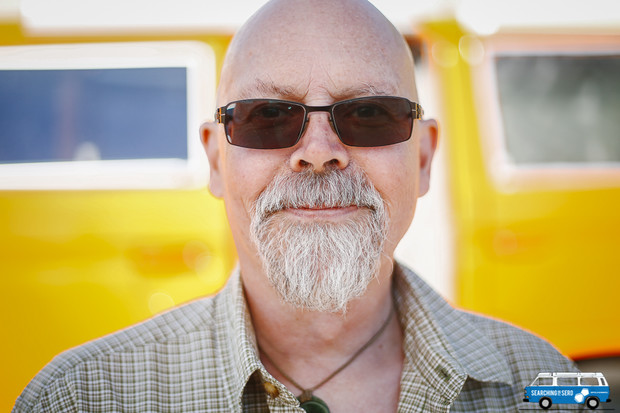 I have put in thirty years and four days at IBM. That was a big deal and it was very much a pure occupation. It had nothing to do with enjoying life, it was about being able to afford to live comfortably and have the money to do the things I enjoyed doing.

Those had to do with the outdoors mostly, like building a canoe and spending weeks out in the middle of nowhere canoeing or taking a bike to France and riding some of the mountains that the Tour uses in their event. From a very young age, Peter was destined to love the outdoors, being raised in Midland, surrounded by Goergian Bay with beaches everywhere and beautiful countryside. His family had the luck of ending up there because Gunther Leitz, from the Leica Cameras, came to Canada in the 50’s to open a factory and Peter’s family came along with him. 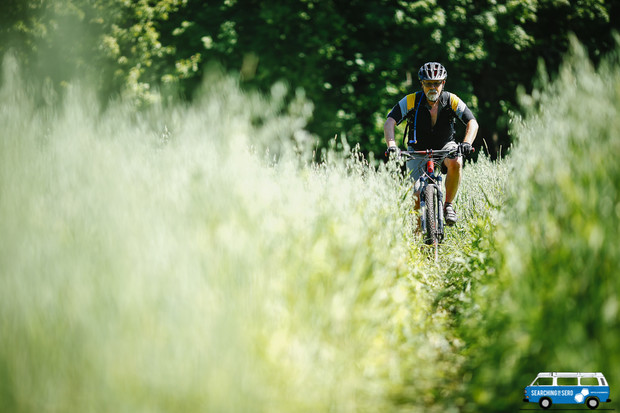 I got my passion for the outdoors from my dad. I can only remember going camping with him twice and to go camping, we borrowed a tent in order to do it because we didn’t own one. Again, it was Gunther Leitz who helped. I think we got rained out on our first trip. We did’t really care because we were out there and it was a lot of fun. Swimming, kayaking and sailing just rolled into our lives. My dad loved to fish so we would go out and do that kind of thing. It was good because it didn’t cost anything to do that.

Peter had many other passions. Cycling was one of them. He got into it in his early twenties and it had a lasting impact.

I got into biking and the first thing I did on a bike is tear it apart, rebuild it, drive up to Tobermaury and hop on the ferry to do a tour of Manitoulin Island. I never stopped after that. It was before I started with IBM. It was while I was just exploring what photography was all about. 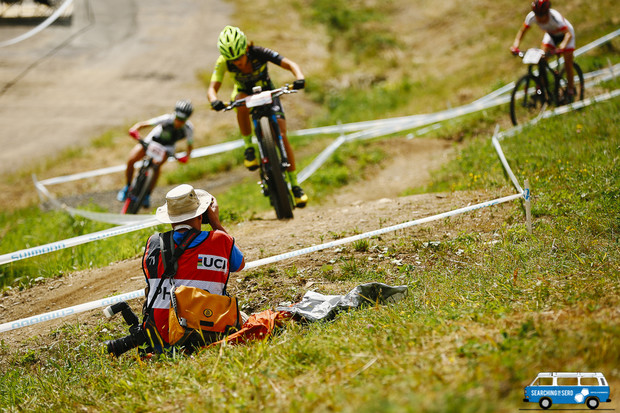 Photography was his other love. Peter went to Ryerson to study it further but couldn’t pursue his artistic career when he became a dad. He had to choose between being a starving artist or a father with a somewhat reliable income and the choice wasn’t hard. That’s when he started working at IBM. He doesn’t regret his choice at all, saying his two fabulous kids rock his boat, constantly inspire him and blow him away in all kinds of ways.

Life went on for many years this way with the ability to continue cycling, canoeing and camping when he had time off. When he turned 50, Peter quit smoking ant took up road racing.Through the LapDog cycling club of Toronto and his partner Andrea, he also got into mountain biking. He enjoyed that very much and could add a lot of new places to his list of biking destinations. Years passed and retirement got closer and closer. 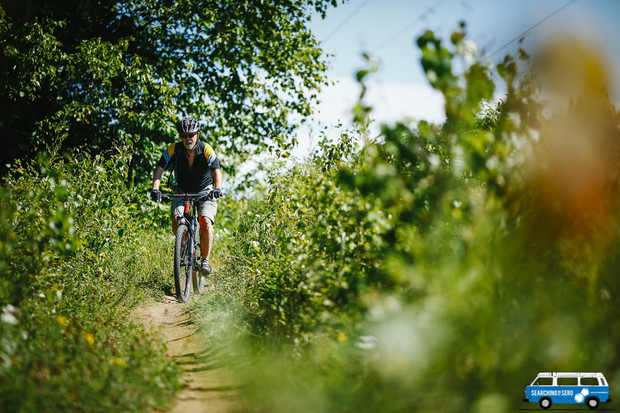 I took the idea of leaving thirty years of work quite seriously, because I know enough people who retired and it’s like their life ends. I started thinking about it as a door opening. I’ve had to commit a whole bunch of my time to somebody else and was rewarded handsomely for it, but time is really valuable. How many summers can you really expect to get in your life? So about three to four years before I was ready to pull the trigger and get out, I started looking around for how I could start a new chapter.

Peter decided he wanted to give photography another go, but things had changed a lot from film to digital and there was a lot to learn. He really enjoyed playing with the camera and wanted more. He decided to try and combine his passions together. 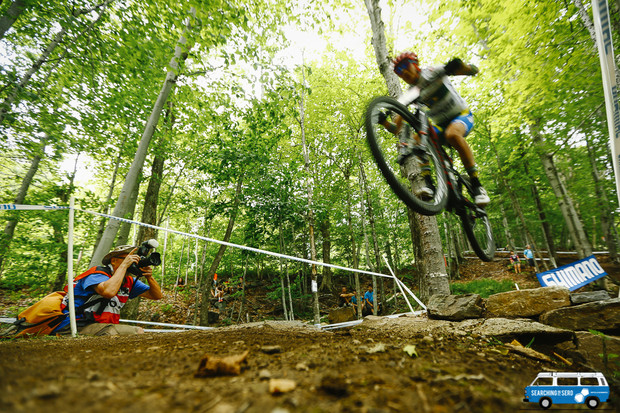 The path to retirement started to be clearer, Peter wanted to travel around photographing bike races. One day, he saw a Westfalia camper and realized it would be the perfect tool for him.

To be able to get to these events in a profession that pays very poorly, you have to figure out alternate ways of doing it. You have to figure out how you are going to eat, sleep and get yourself around. In something like this, it rocks. I don’t remember when I decided to get a Westy but as soon as I did, I was convinced there were no other options. To be able to roll into an event, pop the top with everything you need there, throw one or two bikes on the back and find a place you want to go to and do it, it’s awesome. 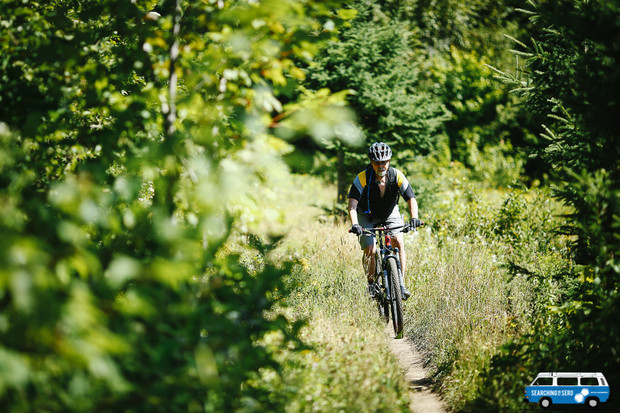 Peter found his lovely Westy, Babe. He took some time to restaure and make her as reliable as possible. He starting going around and shooting bike races and traveling to bike destinations with his partner who's also an avid biker. In 2011, he made the move. After 30 years and four days at IBM, he retired, with as much in front of him as he had behind. Peter knows how valuable life is and how it can all suddenly go away. His dad passing away suddenly at 57 definitely taught him that lesson. Another life altering moment made him even more convinced he made the right choice. On a usual mountain bike ride, he fell, breaking his neck. He spent the following months in a Halo, hoping his body would heal itself, so grateful to be alive.

It’s been three years now. It’s still fairly recent and I’m still very tentative on the bike, but I went back on it. I even went down to Moab, riding slick rocks, gnarly trails. There were places where this memory of falling down the mountain kept coming back and it’s a thousand feet down that side. Those were tentative moments and I’d get down and walk but if I’m comfortable, it’s sweet, it feels good. 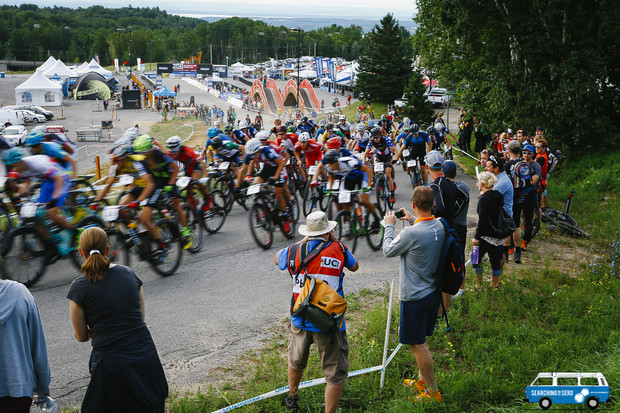 You might wonder what was his motivation to get back on the bike, why would he want to take the risk. Well the answer is simple and easy.

Women’s freeride mountain biking has some serious momentum right now, and that couldn’t be more clear after watching a train of nine ladies getting some serious air time at the first annual Thunderstruck event this weekend at Thunder Mountain Bike Park in Massachusetts. Over the past few years, women’s freeride has been making big strides thanks to progression-focused events like RedBull Formation and Hannah Bergemann’s Hangtime Jump Jam in Bellingham. Last week, a stacked lineup of 12