Most skiers are looking for that one piece of gear that can do it all. One pair of skis, bindings, and boots that they can charge almost any condition the mountain will throw at them. This is reflected in current gear and design trends. Tech bindings are available with DINS up to 16, the trend of skis with abnormally wide waists is starting to regress, and companies are putting in effort to deliver a variety of touring boot options.

To compliment this emerging trend, Scarpa has released the  Freedom RS 130 as a stiffer follow-up to their popular Freedom SL 120. The boot promises the best of every world, and according to Scarpa, “more control than your mother in law wants at Thanksgiving.” In short Scarpa, delivered on a their promises by designing a touring boot with a true downhill performance experience. 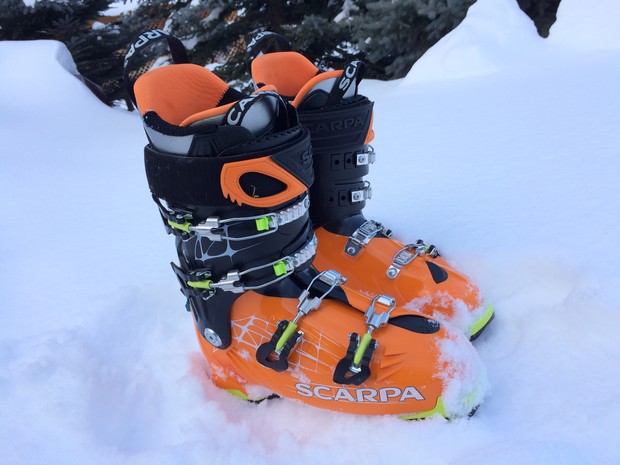 The major differences between the Freedom SL and RS is that Scarpa retuned the cuff with a stiffer polyamide material, which decreased the lateral flex, allowing for more control. Additionally, the forward flex was bumped up to a true 130 to better suit the more aggressive freeride skier. The Freedom RS is secured with four buckles and a clever oversized booster strap. Designed in collaboration with Booster, the strap has two pulley cams, instead of the traditional one, providing a great rebound, which is also adjustable, and a more secure fit.

Overlap construction molds the lower part of the boot around a carbon fiber frame for additional stiffness. The liner is a custom collaboration with Intuition that is thermo-moldable in the lower with a race-inspired, reinforced upper. The sole is a Vibram “mountain plus” that is compatible with tech style bindings. It can be swapped for the “Piste”, a straight-up alpine sole.

The boot has a generous 101mm forward last, meaning that skiers with a narrow foot might be swimming. Fortunately, I have natural flippers, so that coupled with the thermo-molded liner eliminated pressure points for a great fit around my heel and foot.

The Scarpa 130 On the Skintrack 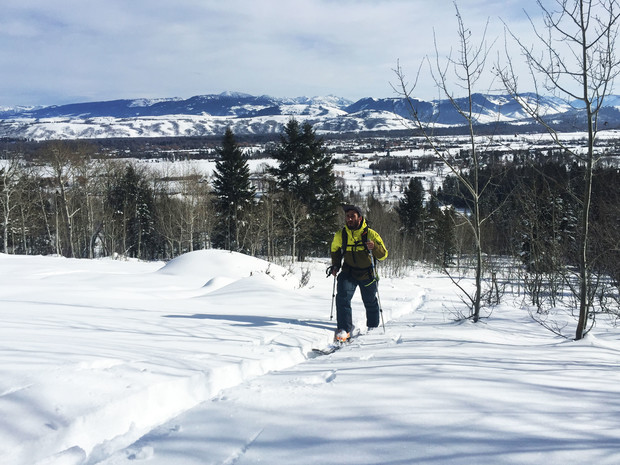 The author on a skin up Wilson faces. Ryan Dunfee photo.

With only a modest 25º range of motion, there are definitely options on the market that will provide movement than the Freedom RS. It is known, however, that this boot was not designed for the lightweight-minded, high-alpine ski mountaineers. I found that with the booster strap slack and the buckles open, there was adequate movement for shorter skins and bootpacks.

On Teton Pass the boot performed like a champ. At just under 2000 grams for a pair of 27.5 boots– one of the lightest offerings in this category – it easily crushed the 1,700-foot pre-work bootpack up Mt. Glory. The range of motion meant was fine for shorter skins, and the fit led to no hotspots or blisters. 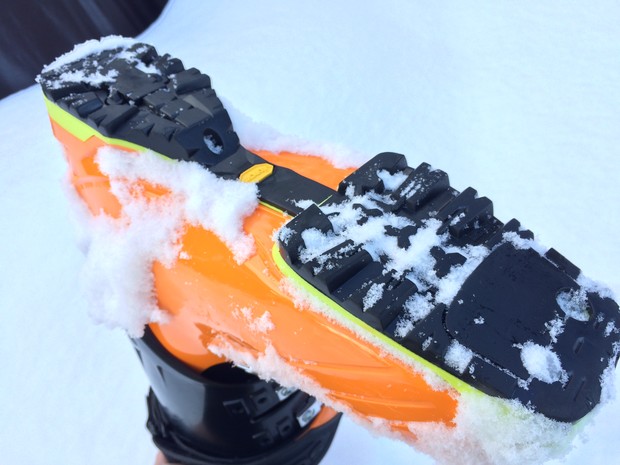 The Vibram "mountain plus" sole can swapped for an alpine one. Jonathan Desabris photo.

Anything consistently longer, or for consecutive long days, I would recommend other options. Transitioning was a breeze, just a simple satisfying click in the heel and you basically had an alpine downhill boot on your feet. 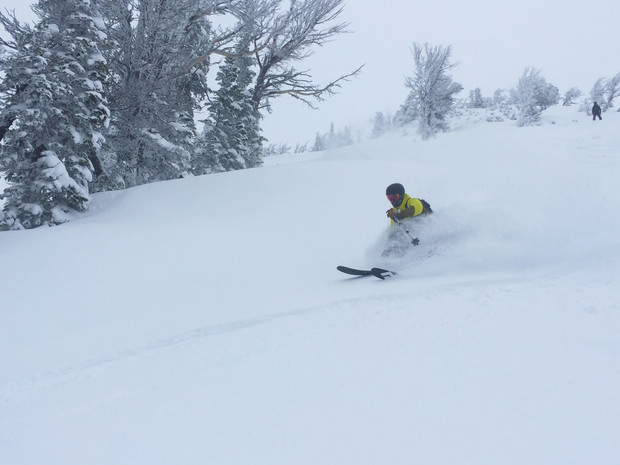 The author attempts to get pitted off Glory. Ryan Dunfee photo.

First and foremost, this is an alpine boot that also comes with a touring capacity. On the downhill is where the Freedom RS's proves their value, and then some. I was using this to ski my BD Boundary 107 with Radical 2 FT bindings, and am absolutely estatic about this combination. The double power strap is genius, providing enough rebound to transfer power on big arcing turns with complete comfort, and minimal pain points.

It is a true 130 flex, and the molding of the lower boot around a carbon fiber frame provided me with maximum stiffness. This along, with the race-inspired liner and the four buckles ensured that my foot was secure in the boot, ready for any descent. 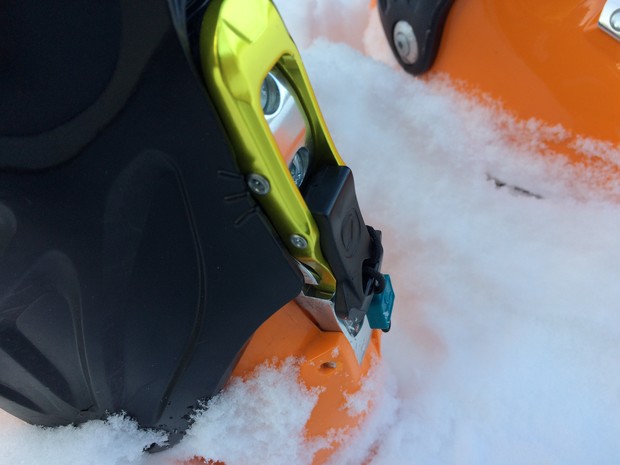 Probably the most watershed moment on the boot was skiing an early season day at Alta. With no new snow activity and only the setup described above, I was worried that my lift ticket might have been wasted. I could not be wrong and felt completely comfortable on a variety of terrain. I was able to set an edge on the old snow and navigate glades with ease. In Jackson, both on the Pass and in the Jackson Hole Mountain Resort sidecountry, the Scarpa Freedom RS's performance is what I come to expect of my heavier, burlier alpine boots. 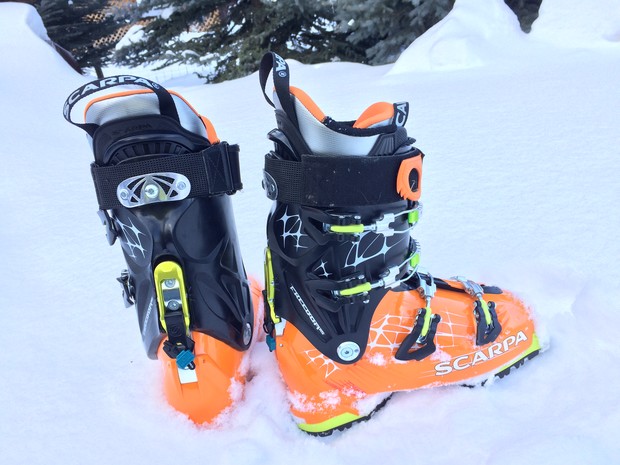 Scarpa delivers as promised, designing a boot that fits the needs of the modern freeride skier. If you are like me, and want one boot to do it all and can't stand skiing in anything but a steel-stiff race plug boot, I would seriously look at the Freedom RS as an option.

Its downhill ability will become legendary, and the swappable soles mean it can be adapted to any setup. If you are someone who values weight efficiency on longer skins and climbs, I would steer for other offerings, otherwise I would highly recommend the  Scarpa Freedom RS 130. The boot retails for $828.95 and can be had from our friends over at evo.com.

I watched many reviews of experts so that I got that I have to buy it or not. And someone write my assignment just because of this also you explain some extra features of it too.