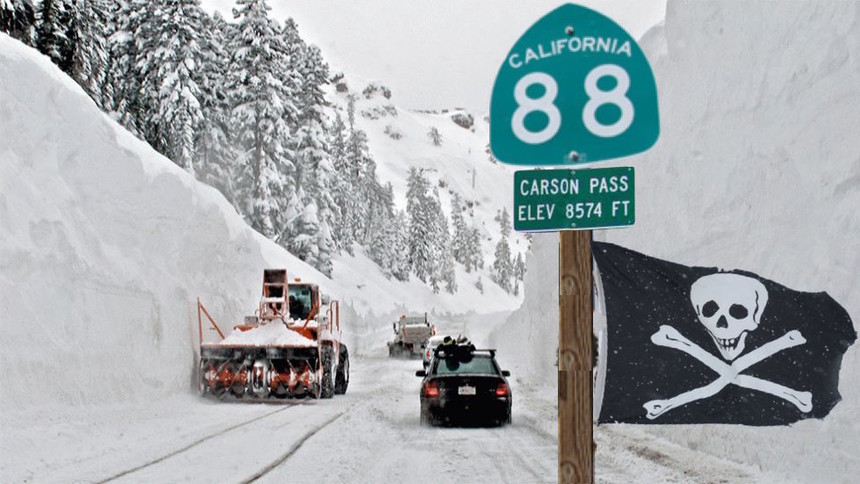 Growing up in the South Bay, it was hard not to fall in love with Carson Pass. Within a few hours’ striking distance, the narrow and often-buried alpine highway offered a stark contrast to the vast, well-trafficked thoroughfare of Donner to the North. Kirkwood — Carson Pass’ unpretentious resort — was like a sanctuary, a Shangri-La, a powder mecca that seemed lost to time — a secret that attracted like-minded people that didn’t mind waking up at 4 a.m., setting off in the middle of the night under the cover of darkness — with the promise of massive snow totals and forgotten fall lines.

RELATED: Jeremy Jones and Elena Hight Show off the Sierra in Ode To Muir

It helps that Squaw Valley — with its Olympic history — has always nabbed the lion’s share of the Tahoe limelight. Squaw is sick! KT-22! Pools! GNAR! Blaaahhhhh! You should definitely go to Squaw — not Kirkwood.

But if you’re into powder, steeps and wide open terrain that doesn’t have a lot of people on it, the choice between Donner or Carson is pretty obvious. Tahoe locals would tell you that Kirkwood sucks. It does. Let me remind you again to not go there.

The touring around Kirkwood along Carson Pass sucks as well. In fact, it sucks so much that snowboarding godfather, environmentalist,  Far Out athlete, and the visionary behind TGR’s film Ode To Muir, Jeremy Jones, credits the region as playing a fundamental role in redirecting his focus toward hiking and away from motorized travel.

RELATED: Find Tickets to a Far Out Showing Near You

As he tells it, early in his career he was spending most of his time filming movies with the support of helicopters in Alaska. One fateful day, however, while touring off the enchanted Highway 88, he strapped in for one particularly amazing run, and it changed his life.

“When I was making all the movies — usually in helicopters — I was spending almost my entire travel budget in Alaska,” Jones told TGR. “When I wasn’t doing that, I was doing more spring hiking in the Sierra, and I remember one day, it was late May, I rode this line in the Carson Pass area, outside Kirkwood. I came out of that thing screaming my lungs out, and I realized it was the best line of my year. I had just gotten back from five weeks of slaying spines in Alaska with a helicopter, but that line made me realize that I was getting more out of hiking.”

Jones’ protege in Ode To Muir, Elena Hight, grew up in South Lake Tahoe, and as a little girl, she also learned (often) how much Carson Pass sucks.

Growing up, Elena’s father was a snowboarder, so he would do everything he could to motivate his daughter to follow in his footsteps. One of his favorite spots was Kirkwood, and he’d drag her along every weekend, bribing her out of bed with the promise of hot chocolate. They would arrive early, and leave late, before the lifts opened, and after they closed.

Her first memories of powder and being in the mountains contain flashes of chasing her father down Kirkwood’s gullies and chutes. “He really instilled in me that pow excitement, like: ‘We’re getting up before the sun’s up!” she remembered.

Running on hot cocoa and eight-year-old stoke, Elena along with her father, would eat pocket snacks on the lift between laps because the elder Hight assured her that they couldn’t stop lest they lose out on fresh tracks to others.

“He would carry snacks because there was no lunchtime at Kirkwood on a pow day,” she said of her dad. “Those were my youngest years snowboarding. I think that’s what really gave me the stoke for snowboarding was seeing my dad on the chairlift with a bunch of old frothers. This was way before Kirkwood was owned by Vail. All the chairlifts were really slow and people were just hooting and hollering. That’s what really shaped my love for snowboarding — that mountain and those days.

“I just remember it being so deep out there that I couldn’t stop and my dad would just be yelling, ‘don’t slow down, don’t slow down!’ and I’d get in his track and try not to fall. If you fell, it meant you were walking — especially as a little kid.”

Alongside her father, Hight’s early zeal for snowboarding was shaped by Kirkwood’s mom-and-pop vibe and genuine authenticity as a place where people went to fall in love with the sport. But perhaps even more than the snowfall, the resort’s gullies and big-mountain terrain set her up for her competitive years.

“I think that’s where my love of halfpipe came from,” she asserted. “Going to Kirkwood and riding the natural halfpipes that they have there from such a young age. Just loving that type of snowboarding.”

In her teenage years, Hight made it a priority to come home and ride every winter, even if just for a few days. During the holidays, if it snowed, her and her little brother would always beeline up Carson Pass. “It was a family tradition — getting up super early to beat the crowds — being there before anyone else.”

Hight recalls a particular Christmas pow day at Kirkwood that stands out as one of her best ever. She had a flight to catch, but a massive Sierra storm reared up from the Pacific and locked down air travel. Far from disappointed, the Olympian thanked the snow gods, rallied her brother, and spent the holiday getting shacked in the white room. Merry Christmas!

“I was like, ‘THANK GOD!!’ “ she laughed. “That happened to me a lot during my contest career — you could guarantee it was going to snow if I had a flight the next day. It was the worst, best luck ever. ”