Back in 2014, ski photographer, avid TGR Fan, and adidas TERREX ambassador Jim Harris was paralyzed below his chest in a tragic accident while kite skiing in Chile. An errant gust of wind grabbed Harris’ kite and slammed him into the side of the mountain, breaking nine vertebrae in his back.

In the time that has followed, Harris has recovered in a way that is nothing short of miraculous. Exactly one year after the injury, Harris got back on skis for the first time. Since then, he's continued mountain biking and maintaining a successful art and illustration career. Now, he's gone so far as to make a mountain bike descent of Colorado's highest peak, Mt. Elbert.

While he has continued to get stronger everyday, Harris also says his injury has taught him how to accept and celebrate new limitations. TGR caught up with him following the third anniversary of his accident to hear what he had to say about coming to terms with his new life.

In the years since your injury, it seems you’ve been pouring yourself into mountain biking a bit more than skiing. Why is that? 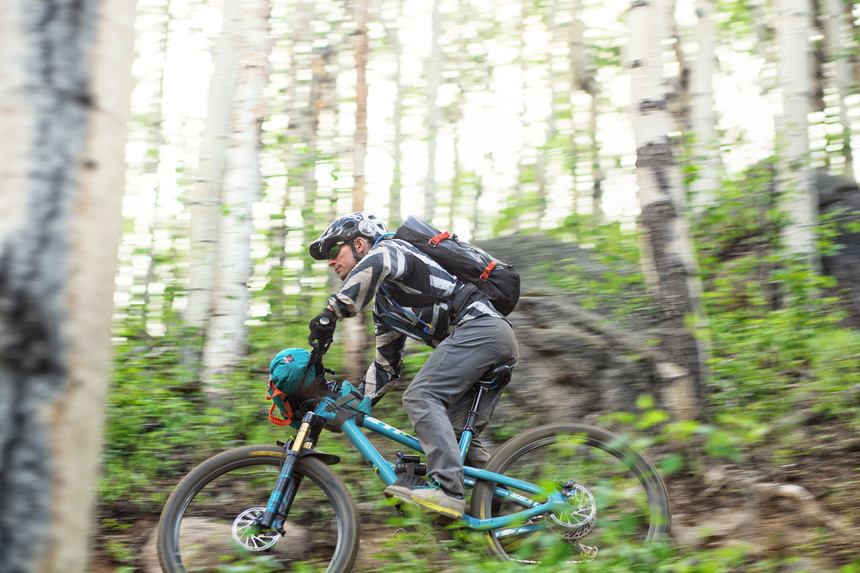 These days, by mountain biking, Harris means riding a fully loaded bike up and down a 14er. Michael Stevens photo.

But since the injury, it’s the sport I’ve gravitated towards more because it’s something I can still do well enough to the point where I’m not acting like an anchor to my friends on a group ride. I don’t necessarily feel that way about my skiing abilities anymore.

RELATED: Through the Lens - Jim Harris

That has to be hard, no? What’s it like to not be able to perform something you love to the levels you used to be able to?

Yeah, you know it was a tough thing for me. I never really consider myself a jock, but after getting hurt I realized all of my friendships are based on doing fun stuff outside. I don’t really care about football, and I’m not much of a bar star or a poker player, so immediately after I was like, “I don’t even know how to make friends if not biking or skiing.”

In that way, I’m thankful for the community that the High Fives Foundation has been able to build for adaptive sports and non-adaptive action sports, because they’ve made it easier for me to adapt to life after the injury. And look, I had a really dramatic and unlikely recovery at Craig Hospital in Denver that was made possible through Roy Tuscany and the people at the High Fives which ultimately lead to that first day back on snow in 2015. 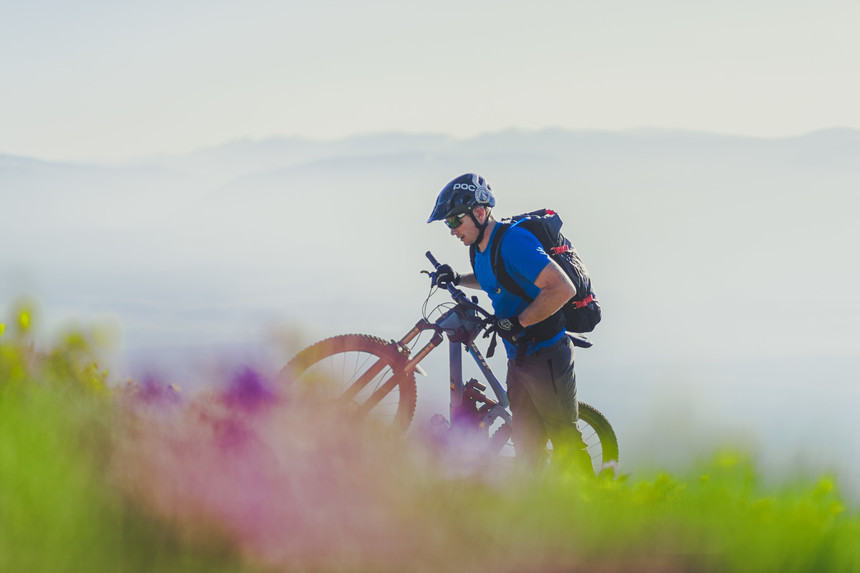 It's been just over three years since a freak accident paralyzed him below the chest. While he can walk and bike again, Jim Harris wants people to know that it's okay to accept limitations after an injury. Michael Stevens photo.

And while it has been great to get back on skis, I feel like I’m not a good skier necessarily right now. What you didn’t see was–that first day back at Alta in 2015–I only skied across the very bottom of the hill. It wasn’t even the bunny slopes. You know, I only skied seven or eight days last season and this is the first year I can remember in my life where I don’t have a season pass.

It’s funny though, because it’s been so sunny here in Colorado, that there’s actually been more snow in Moab [Utah] than here in Carbondale. So the silver lining for me in everything is that the mountain biking is still good.

Do you feel like mountain biking has replaced skiing for you? Has it filled that void left by skiing?

Look, skiing is still pretty enjoyable for me, but there’s some part of the risk factor of skiing that’s hard for me to shake. A couple months after I first got back on skis following the accident, I put a hairline fracture in my fibula skiing. I had just began getting away from walking with canes and all of a sudden everything went backwards. I think it was just part of maturing, that I realized I needed to stop taking physical risks because I won’t bounce back like I have. And I think, with biking, that’s one thing that feels much different than skiing, I feel like the risk factor is lower. 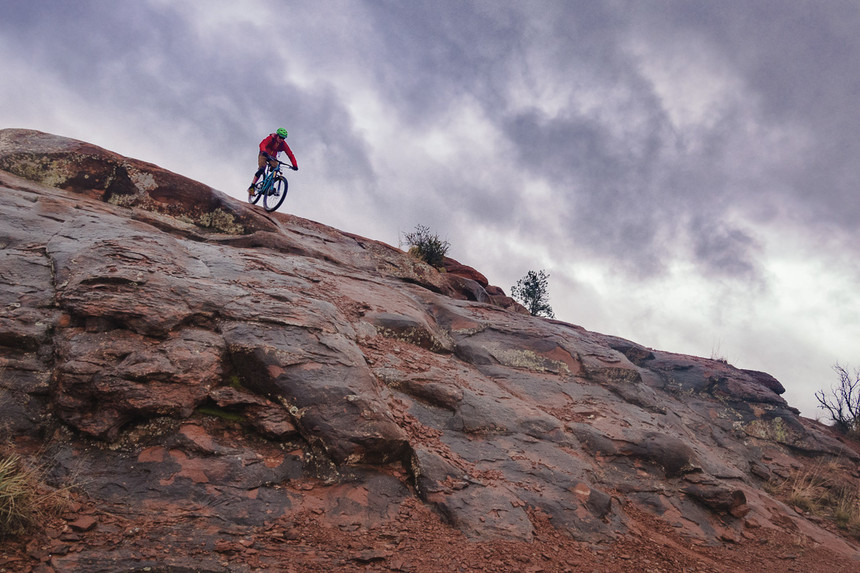 Since his injury, Harris has spent more time on his bike but says nothing will ever replace his love of skiing. Jim Harris photo.

But that said, skiing occupied such a huge part of my life for eight years, nothing could ever replace it for me. It was what I was doing for fun and for money. It was what I daydreamed about. It was the shit I’d get validation on the TGR message board for. It checked off all the boxes in my life of both income and socialization. It was my way to connect with the universe and feel blissed out.

That was the one biggest downside for me in getting hurt was I didn’t know how to replace all those feelings in different avenues. I haven’t found anything that checks all those boxes skiing did, and I’m not sure I will.

Is that the main appeal to biking for you? That you feel you’ll be able to progress further than skiing?

I think it’s nice to not feel I’m lagging. For my birthday/injury anniversary I rode the White Rim Trail on the last day of November, and that was the longest I had ever ridden a bike regardless of the accident, and I kinda did it on a whim and it was challenging and felt great to accomplish.

But that said, progression isn’t really the appeal. I don’t think I’ll ever be a super rad biker, to be honest. I think I’ll keep getting stronger and keep regaining ability, but I don’t think I’ll ever have the athleticism I had before, and I’d probably be setting myself up for failure to think I could make a living doing guiding work or chasing pro mountain bikers around.

But that’s okay; there are still a lot of enjoyable things in life.

So where does that leave you with your photography?

I still really enjoy shooting skiing and mountain biking and the great outdoors, but what was always most enjoyable about it for me was that photography was a way to connect and communicate with other people. And how I really enjoyed doing that, was shooting photos of videos in places where it felt like nobody else had ever seen. You know, getting that shot of someone just shredding on skis at sunrise when there was nobody else around, but with my camera I could share it. 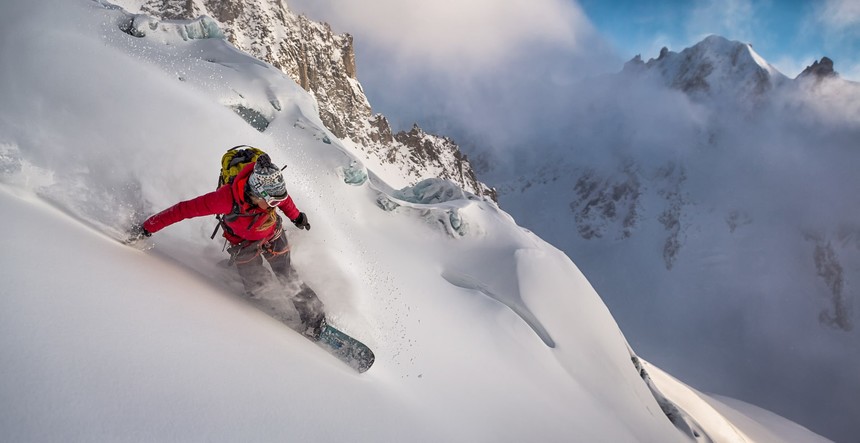 Harris says he misses being able to get shots nobody has ever seen, like the above shot of the departed Liz Daley in Chamonix. Jim Harris photo.

But now, since getting hurt, I feel like with the mobility I have, I’m not going to places nobody else has shot before because I can’t get there. And I’ve never had the drive to go get up early in the morning and take photos overlooking say, the Snake River, where it’s me standing shoulder-to-shoulder with 30 other dudes shooting it. I’d rather make something that is completely unique; it feels less compelling when it’s something people have seen before.

Do you think that’s why you have gotten more into art and illustration since the injury, the fact that, when you create art, you’re creating something never before seen?

Art has been something that’s been fun to be part of and I’m glad I have it. My opinions about how to communicate visually matured while I was focused on photo and video stuff and have informed how I make other types of art. Ultimately, art and photography–for me–are just slightly different approaches towards the same goals. 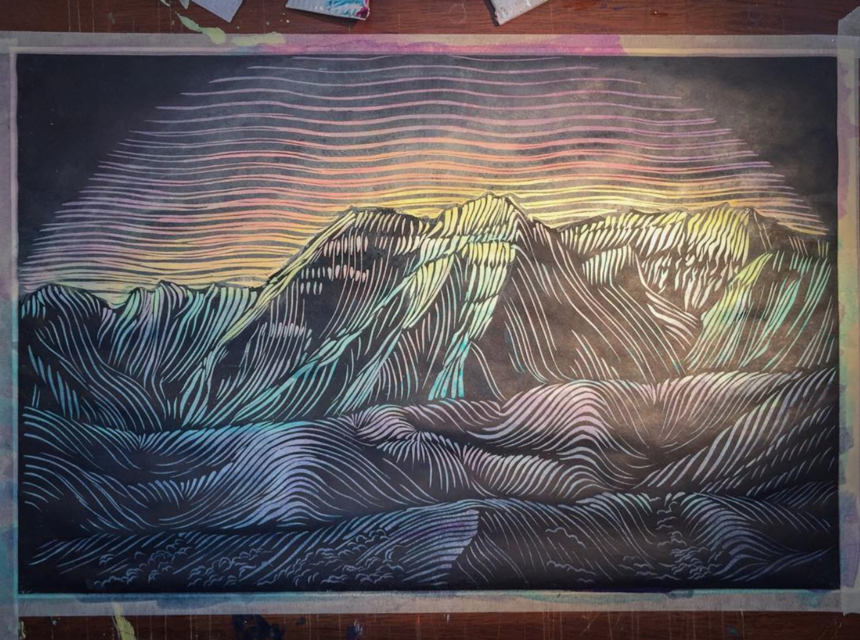 In many ways, it's parallel to biking versus skiing in my life: I've been involved in art longer than I've been into photography, but more at a hobbyist level. I got into both backcountry skiing and photography around the same time and obsessed over both in ways that I hadn't with biking or making art.

But art has really been my primary income for the past year and provided me that creative outlet, which I appreciate. And I think I'll continue to expand my art and illustration work. It's my chance to make something totally unique.

Life can certainly be unexpected! Im glad to hear your recovery into art has gone really great for you. When life hands you lemons…