Women’s freeride mountain biking has some serious momentum right now, and that couldn’t be more clear after watching a train of nine ladies getting some serious air time at the first annual Thunderstruck event this weekend at Thunder Mountain Bike Park in Massachusetts.

Over the past few years, women’s freeride has been making big strides thanks to progression-focused events like RedBull Formation and Hannah Bergemann’s Hangtime Jump Jam in Bellingham. Last week, a stacked lineup of 12 ladies competed at  Proving Grounds, moving the needle for women’s mountain biking and proving that there’s a huge demand for more opportunities for female-identifying riders. 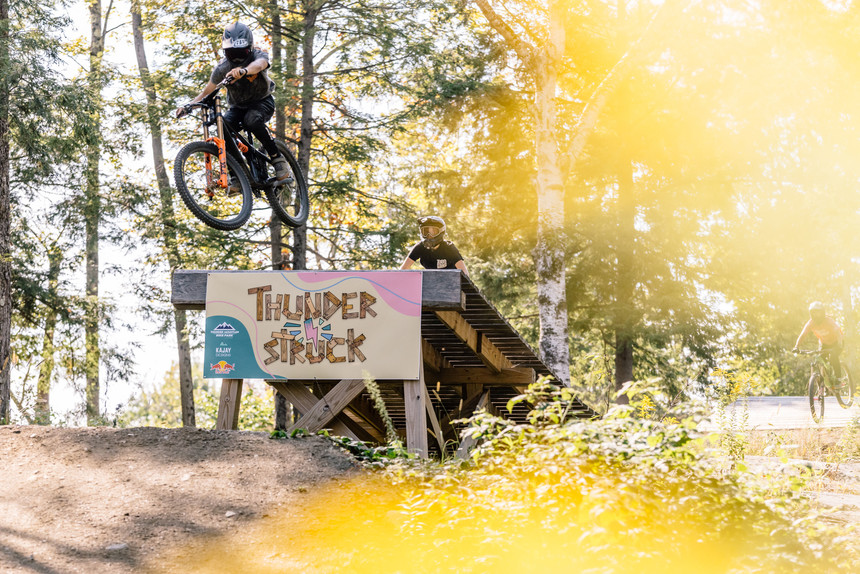 Despite that progress, New Hampshire-based mountain biker KaJay Rooke noticed that so far, most freeride events had been concentrated in the west or northwest, and she felt that the riding out east had big terrain that could challenge riders just as much as anything else in the country. Helping launch a freeride event for women was something that hung in the back of her mind for a while, but it wasn’t until a bike crash last season left her laid up with a broken back that she started making calls and turning Thunderstruck into a reality.

For those who spend most of their time riding in the Rockies or along the west coast, it may come as a surprise that one of the largest public jump lines in the U.S. is in western Massachusetts. A high speed pro line with massive drops, jumps, and wooden features, Thunder Mountain’s Fort Hill is as big as it gets, and Rooke knew that it would be the perfect stage for a ladies progression session. 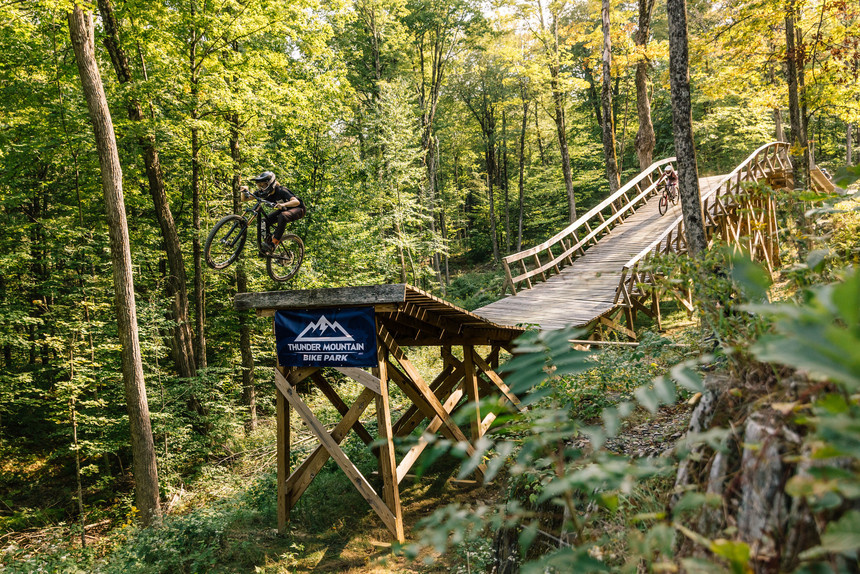 Thunder Mountain Bike Park's Fort Hill is one of the biggest public jump lines in the world. | Katie Lozancich photo.

Instead of a competition, Thunderstruck was set up as a jam-style event, an opportunity for women to ride together and progress as a team instead of against each other. “I’ve definitely admired Formation and Hangtime for that format,” Rooke says. “They’ve both been really successful and I think the fact that they both prioritize community and progression versus a competitive podium finish is really important for the sport and what I really wanted to bring to this event.”

Nine ladies spent two days sessioning Fort Hill (eleven were on the original roster but two had to drop out due to injuries prior to the event), walking the course and linking together the line as a group on Friday before hitting the jumps for a crowd on Saturday. Women traveled from all over the U.S. and Canada - and the athlete list even included Chilean rider Renata Wise and Ana Julia Gutierrez from Mexico. 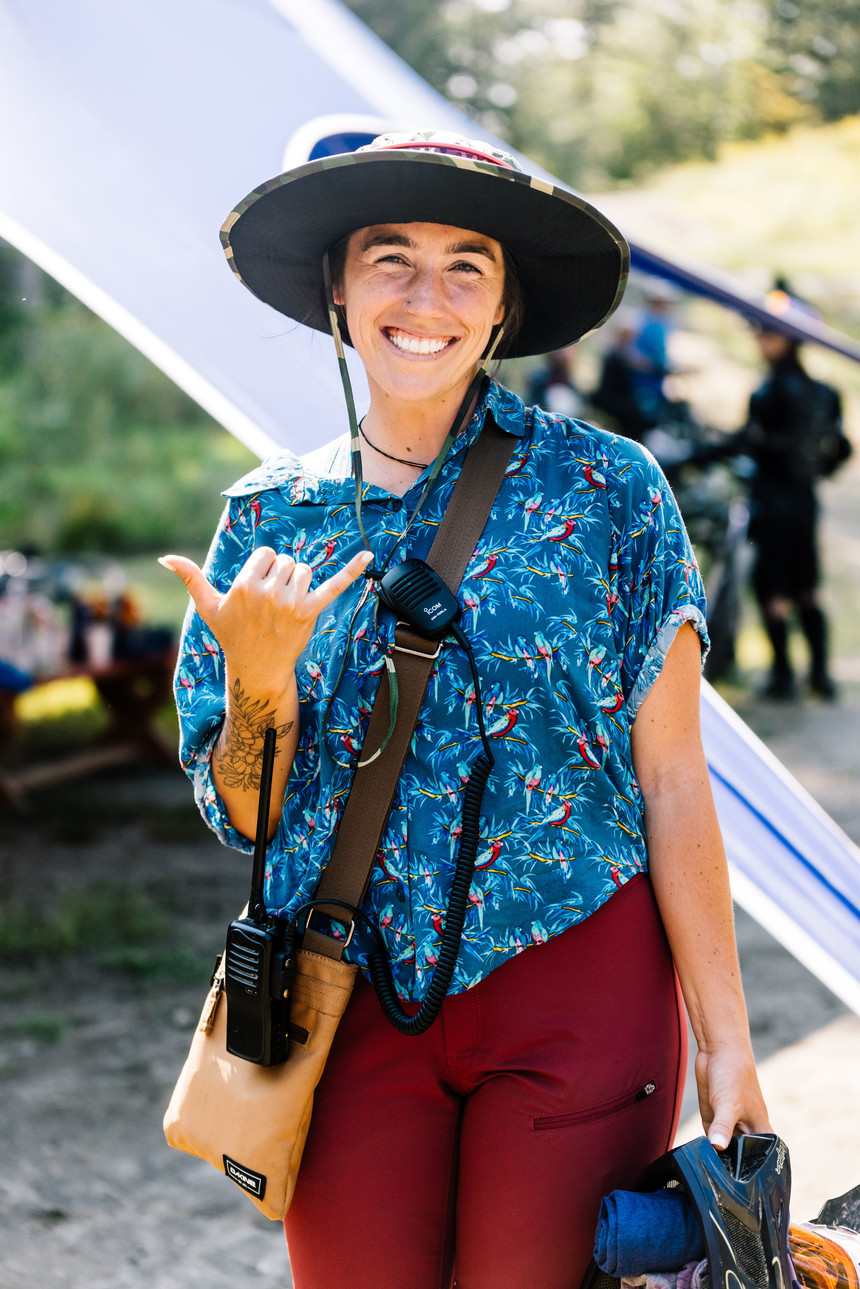 KaJay Rooke dreamt up the idea of Thunderstruck after seeing other women-focused freeride events across the west - bringing it to the east coast was a natural next step. | Katie Lozancich photo.

“Everyone got together and became really close friends pretty quick,” said Colorado-based rider Kaia Jensen. “We all talked about how if we had come here individually, we didn’t think we’d have made it as far down the line as we did in just one day.” Local athlete Laura Slavin was the only rider who had ridden the entire line prior, and two other women had ridden the first few jumps, but other than that, the line was new for the group and they spent the practice day piecing together the 14 features that gradually get bigger as the line progresses.

“I was definitely scared hitting a lot of it, and it took me a while to hit that last jump,” says Jensen. “But when there are a bunch of girls hitting it all different ways around you, you’re just like ‘oh yeah, I can do that.’ I can borrow their confidence and step up and do it.” Certain features were harder for some of the ladies, but Jensen says that every time someone got stuck on one, the group would stop and talk it through before moving on to the next one, which is the heart of what she loves about the freeride community. 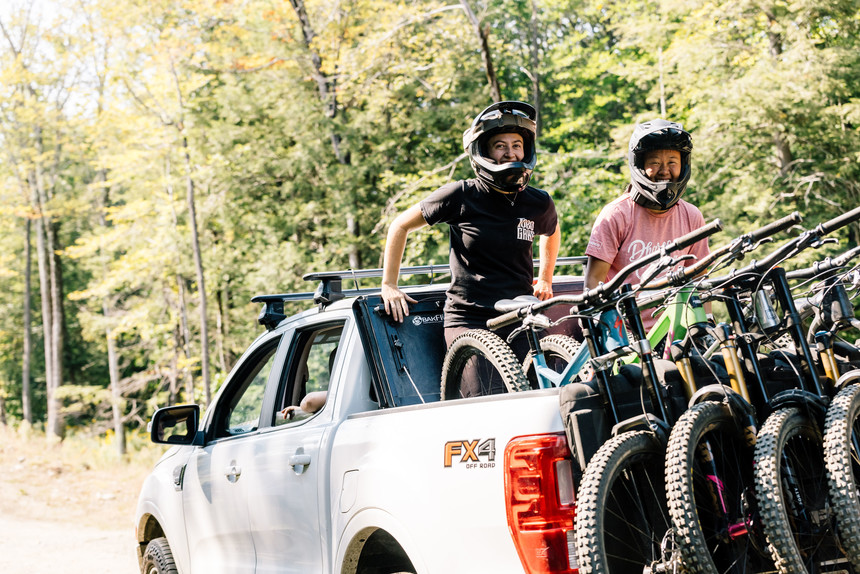 Kaia Jensen is stoked on the camaraderie of freeride events like this. | Katie Lozancich photo.

“I race EWS the rest of the year, and I usually meet a few girls, but in the competitive race scene people are more closed off. I love talking about lines and working together with other riders,” adds Jensen. “That’s why KaJay’s event was so great. I got to meet people to ride with and hit features that I otherwise might not have hit, and I have friends that I already have plans with for the rest of the year.”

Building community and showing the mountain bike world some of what the north east has to offer is exactly what Rooke had in mind when she initially dreamt up the event, which will hopefully be the first of many down the road. “I want riders out here, especially young riders, to see that in their own backyard they can progress to these next levels, that they have the tools here in the east,” she adds. 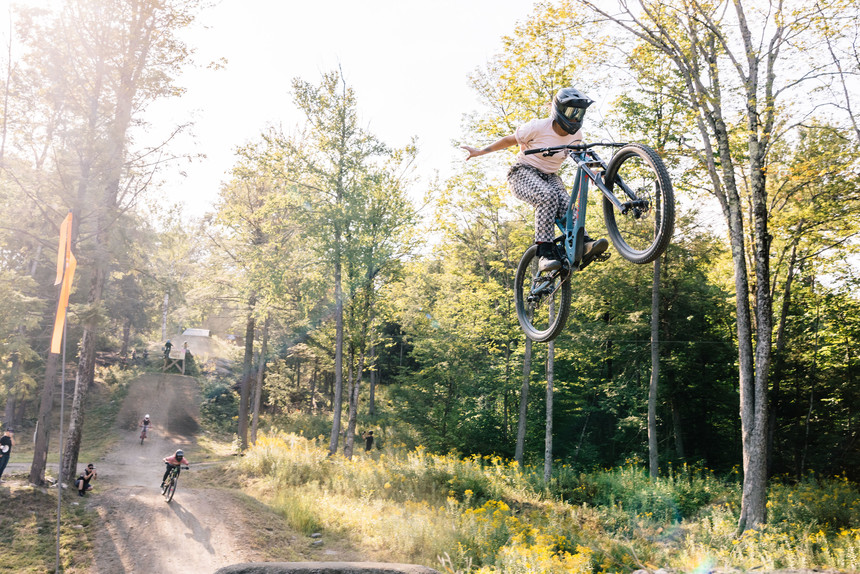 Watching train after train of the nine ladies sessioning Fort Hill—not only hitting the jumps but throwing tricks and styling big features—it’s clear that grassroots events like Thunderstruck are what the sport needs to keep its freight train-like momentum going. The riders’ skill and hunger for progression is there, now all it takes is more opportunities to bring women together and carry each other forward.

Canyon's Strive CFR is the German brand's newest race-specific enduro bike - and boy is it fast. | Lily Krass photo. It’s impressive what impact high-level enduro racing has had on bike design over the last decade. When the sport first started hitting the world stage, riders showed up to races with bikes ill-suited for the job. Reality was, if your bike didn’t completely fall apart by the end of the day, you had a fighting chance of standing on the podium. Now that it’s 2022, enduro race