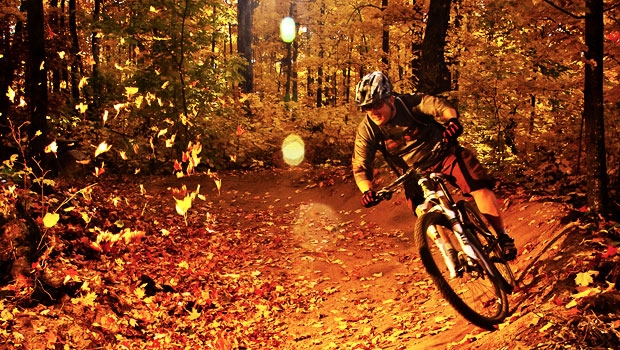 Exotic isn’t the first word many people would use to describe the freeway and skyscrapers of St. Paul and Minneapolis. My destination was only a few hours beyond these city limits, but mountain biking in Wisconsin seemed as esoteric as the start of any other journey. In a region known more for cheese and dairy cows than fat tire adventure, the anomaly of Midwest singletrack was seductive, exciting, and mysteriously different from the agrarian stereotypes that surrounded Wisconsin. As far as I was concerned, Midwest riding embodied my definition of “exotic.”

Pinned against the border of Michigan’s Upper Peninsula in the lush, northern woods of Wisconsin, the Chequamegon-Nicolet National Forest has made a silent entrance from behind the state’s cheddar curtain. A highway leads north from the Twin Cities into the Chequamegon area and filters out much of the Midwest farmland. White barns and cow pastures give way to sporadic clusters of woodsy trees and swampy wetlands—the type of whimsical backyard I always dreamed about as a kid. This mid-September drive hinted at what the next few weeks promised an autumn palette of blazing foliage. Leaves hung onto their last days before they would blank the woods in a colorful patchwork of rotting mulch. This time of year was ripe for adventure.

Mountain biking in Wisconsin seemed as esoteric as the start of any other journey.

My travels brought me to Wisconsin’s Northwoods to witness one of the country’s largest mass start point-to-point races, which takes place each year along forty miles of off-road trails. The Chequamegon Fat Tire Festival, which includes this all-out sprint on the Birkebeiner Trail, brings upwards of 2,000 racers to a rural cluster of small towns each September. With rumors of abundant biking in the Midwest—an unusual bike locale for this dirtbag living in Utah—I joined the caravan from the Twin Cities to celebrate the love of shred. Nearly 400 miles of trail lurk in this woodsy part of Wisconsin, yet barely one-third of it is classified as actual singletrack. It’s not a recording-breaking total, but it’s a surprising number for a region that boasts few stoplights. 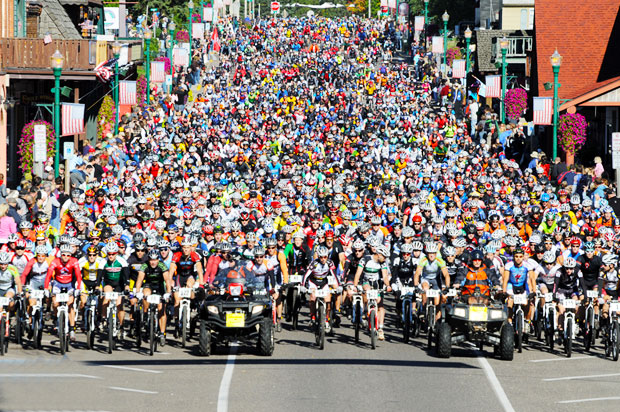 Until recently, singletrack didn’t really exist here. The Birkie Trail has seen plenty of traffic for decades thanks to massive events like the Chequamegon Fat Tire Festival and the American Birkebeiner Nordic race, but it’s more akin to a glorified fire road than all-time singletrack. A “meager” twenty feet at its narrowest width, technical obstacles take the shape of grassy hills, pebble trails, and bigger-than-expected ruts that have eroded away parts of the hills. Its reputation precedes itself across the Midwest bike community, but has prompted awkward conversations out West that go something like this:

“I was there last summer. Teton Pass has epic trails.”

“Wisconsin? Why the hell would you go there?”

Ron Bergin, the executive director of the Chequamegon Area Mountain Bike Association (CAMBA), soon explained what I had only felt since arriving to the Northwoods: this place is special. 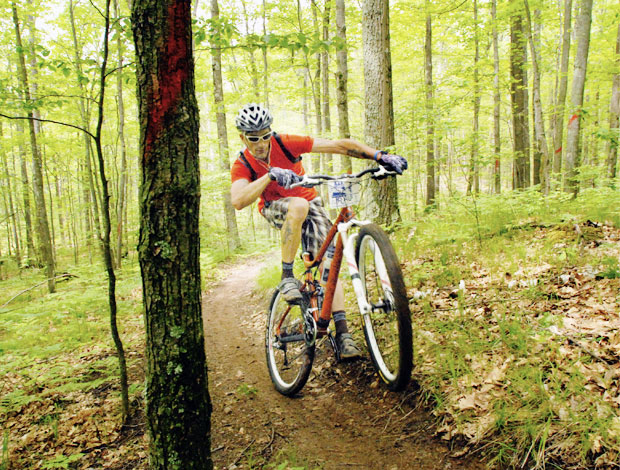 The Chequamegon area is divided into six clusters of blink-and-you-miss-it towns of Cable, Seeley, Namakagon, Drummond, Delta and, the largest of them all, Hayward. Before CAMBA was established in 1993, this silent sport community of bikers was an unincorporated clan that had little say in what went on in the Chequamegon-Nicolet National Forest and neighboring Sawyer and Bayfield County Forests. (Lumberjacks had authority over what happened in the forests for many decades before agreeing to work with the mountain bike community.) And although bikers had 300 miles of existing doubletrack, snowmobile trails and fire roads to choose from, CAMBA saw the Chequamegon for what it could mean to the sport and, ultimately, tourism. CAMBA’s vision: to create an intricate, accessible network of Midwest singletrack within these six small towns for a one hell of a fluid ride.

Head out to any cluster, and that idea has become more than just a fantasy rooted in the 90s. Pedal a few strokes beyond the trailhead and the singletrack dips into terrain that resembles a giant, continuous pump track that demands total-body rhythm for a smooth, methodic ride. Rambling trails are etched into the hillside, where beginners can learn the fundamentals of bike handling on the same sections that have solid experts leaning into soft switchbacks and unleashing the throttle.

Lumberjacks had authority over what happened in the forests for many decades before agreeing to work with the mountain bike community.

It’s flowy and fun, in the most cliché way, but navigating the Northwoods requires a tactical strategy that involves big ring pedaling and nimble fingers. Short and fast descents are followed by short and fast ascents, with equally brief lulls before punching through another wave of rolling intervals. This balance sets a pace that racks up fast miles, but delivers an out-of-the-saddle thigh-buster if you’re late to shift gears—which, perhaps, is why single speed devotees account for a good chunk of Wisconsin bikers. 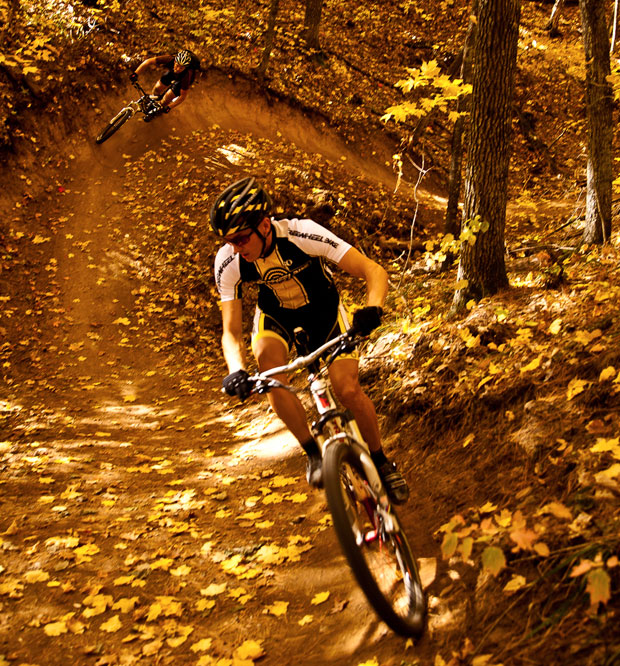 Vertical rise is maxed out at a few hundred feet, yet the CAMBA trails possess some majestic virtue that makes it impossible not to ride. Residents feel it. Foreigners seek it. And business owners, especially on this particular weekend, can’t get enough of it. Local hangouts were stuffed with visiting racers and their cheer squads for the festival. Hotels and campsites were full, and houseguests were packed fifteen people deep in cabins owned by laid-back Chequamegon locals.

This particularly busy weekend in the summer brings in a few thousand extra bodies and, what I assumed to be, equally busy trails. But as I waited one morning to meet my trail guides, Stan Walczak and Marcia Engebretson, at the Namakagon cluster trailhead, the parking lot was strangely empty. Once we ducked into the leafy woods, we didn’t pass a single rider during our twenty mile pedal.

CAMBA’s vision is becoming more noticeable, more special, as it quickly approaches a century ride’s worth of actual singletrack. An IMBA Epic Ride salutes the thirty-one mile Rock Lake-Namakagon-Patsy Lake trail loop. A five mile stretch of trail that opened on Seeley Pass will soon link Seeley and Cable together. And plans to interconnect the remaining clusters are an ongoing effort, adding another fifteen to twenty miles of singletrack to these small communities. 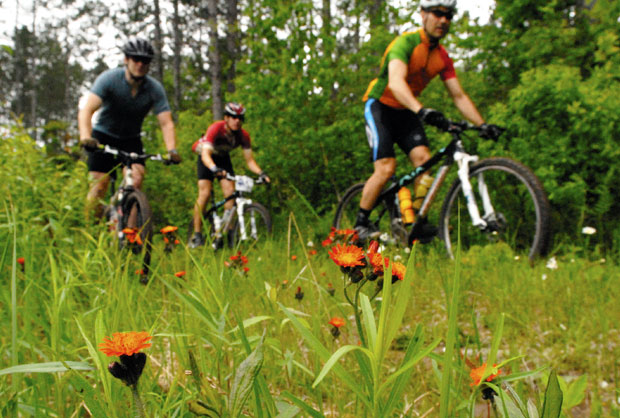 Among this special place are the people who live for the trails. Advocates for silent sports mingle with ambassadors of gas-guzzling machines, and few conflicts surprisingly ever arise. ATV and snowmobile routes intersect with the bike and Nordic ski trails, but gridlock happens only a few weeks each fall when hunting season puts a halt to recreation in the woodlands.

The two cultures are an awkward mix on the trails, but this mix dissolves into a sort of silent kinship when the purr of diesel engines and the squeal of disc brakes are greased over by the sound of clinking pint glasses. At a local dive bar in Seeley, tired racers gathered for celebratory brews after the Chequamegon 40 race. Two men, dressed in sweat-crusted trucker caps and faded camo t-shirts, sat within earshot of my barstool.

“Lotsa bicycles in the parkin’ lot tonight,” observed one local.

“I think there’s sumthin about a bicycle event in town,” his friend concluded, indifferent but not apathetic to the bar full of energetic out-of-towners.

The two cultures are an awkward mix on the trails, but this mix dissolves into a sort of silent kinship when the purr of diesel engines and the squeal of disc brakes are greased over by the sound of clinking pint glasses.

Their small talk, though, was quickly drowned out by the lyrical philosophy of a band on stage, whose lead singer waxed poetic over pensive topics like fishing with your woman and the wonders of lactic acid—a familiar topic among tonight’s Lycra-loving patrons. And, for the record, not once did he sing about Wisconsin cheese.

St. Paul/Minneapolis airport is a short three-hour drive. Browse lodging options in Cable or scheme a weekend itinerary in Hayward. Before heading out on the trails, pick up a trail guide from CAMBA and figure out which clusters you want to explore. If you’re there to ride in the Chequamegon 40, you hopefully snagged a spot during the lottery, held in mid-March. Otherwise you’ll be cheering from the sidelines September 12-14, 2013.

New Moon Bike Shop is your stop for necessities and local trail knowledge. Indulge in some bike lit at Redbery Books on a rainy day, where there’s a good selection of two-wheeled tales and guidebooks for inspiration. Cap your stay with a visit to the quirky Fresh Water Fishing Hall of Fame, the angler’s Smithsonian of rods, reels and flies, for the hell of it.

Customize a wood oven pizza at River’s Eatery, and sample from an impressive microbrew menu while your pie is bubbling to perfection. Logging artifacts dot the walls at Sawmill Saloon, which brings friendly locals to the U-shaped bar for food, whiskey and rock ‘n’ roll. Backroads Coffee & Tea serves up made-to-order deli sandwiches and java that’s been roasted in-house for a cozy lunch break in Hayward.

Nice article. Just FYI a lot of these clusters cross the North Country Trail where no “shredding” is allowed.