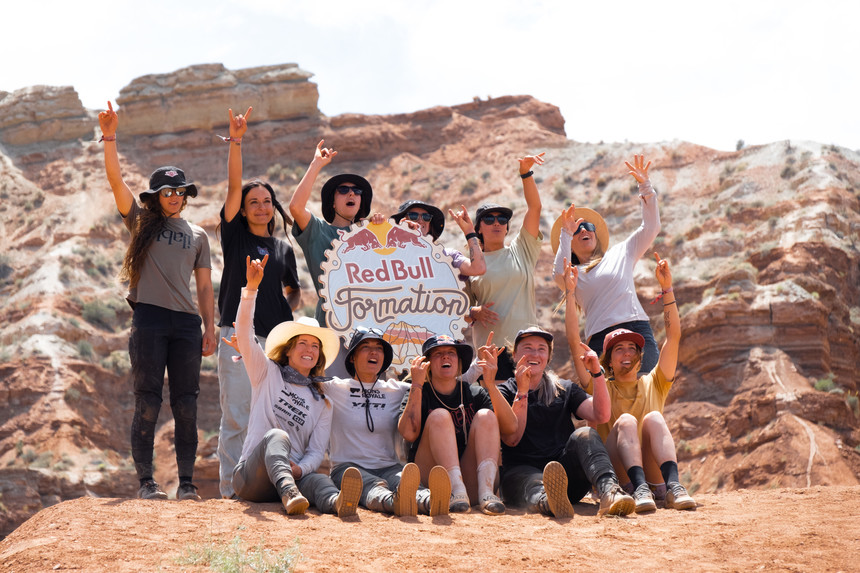 The action sports industry knows that when things go down in Virgin, Utah, they go down huge. So when the brainchild of bike industry guru Katie Holden, skier Michelle Parker, and several others came together to create Red Bull Formation back in 2019, it was bound to be special. Formation is an all women’s freeride mountain bike progression event. The women and their diggers craft lines through the epic hills of Virgin for three days before spending three days piecing together their lines in hopes of a top to bottom run. We were lucky enough to make it to Virgin for one of the dig days and all three ride days to check it out. Here are some of our favorite moments. 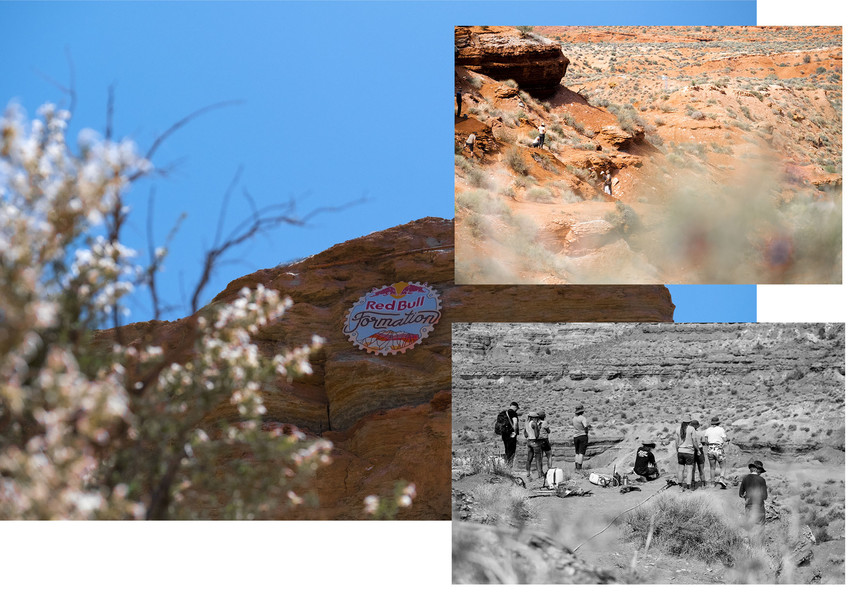 By the time we arrived on the last dig day, the girl’s lines were really shaping up. The location, just outside Zion National Park, is an unforgiving environment. Steep cliffs, loose dirt, and sweltering heat make up the event’s grounds. What first struck me as I wandered through the desert was how impressive it is for the women riding the event to look at these cliffs and find something that looks passable to them on a mountain bike. The dig took place at the 2015 Red Bull Rampage site so the women are able to use bits of old deteriorated lines from previous Rampage events. 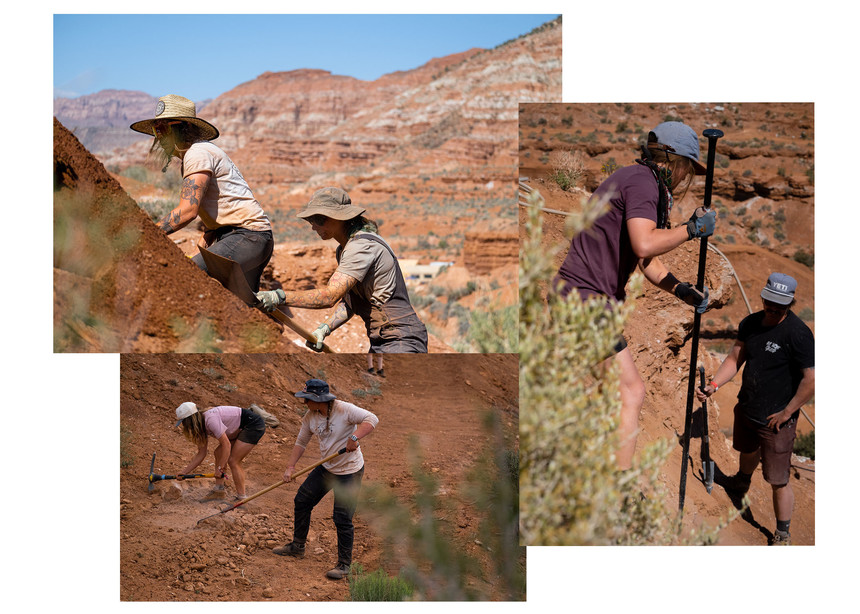 Vaea Verbeck had started her line at the top of a steep drop where it flowed along the ridge line into a huge hip and ended in a big cliff drop before hitting the ‘Snake Pit,’ a lower section of more flowy freeride jumps the women had sculpted. Helped by Michelle Parker and Brooklyn Bell, Vaea’s line was the furthest to looker’s left. Next over on the ridge was Hannah Bergemann, Casey Brown, Vero Sandler, and rookie Georgia Astle’s line. They revamped one of Brett Rheeder’s old lines and Casey was able to gather beta from him throughout the build process. A series of steep drops and exposed cliffs led them down the hillside for an absolutely puckering combination of hits. Camila Nogueira and Louise Fergusen’s lines both started in an opening in the cliff that came to be called the ‘Utah-res.’ Louise took a flowy descent out of it while Cami chose to straightline the ridge. Their lines met at a gorgeous triple drop before diverging again into step-ups and step-downs that highlighted each rider’s style. Vinny Armstrong’s line was just to the left of Cami and Louise and took a steep entrance through a spot called ‘Diagon Alley’ before hitting a massive step down. A hip where Vinny could showcase her signature whip style led to a notch called ‘the Horcrux,’ before dropping Vinny onto another trick jump in the Snake Pit. Further over along the ridge Robin Goomes, Chelsea Kimball, Sam Soriano, and Harriet Burbridge Smith (Haz) all shared a drop in. While Robin, Sam, and Haz all chose a loose straight line to steep drop, Chelsea opted for a series of cliffs that led her out to the biggest step-down in the Snake Pit. Robin and Haz also hit the step down, whereas Sam chose to build a fun, flowy lily pad with the help of TGR athlete Blake Hansen and skier Birk Irving. Each line showcased the rider’s style, strengths, and an overall show of incredible talent, creativity, and grit from each rider.

The lines. Courtesy of Red Bull.

Day one was exciting as the women began to piece together their lines. Several local riders such as Ryan McNulty, Dylan Cobern, and Reed Boggs showed up to guinea pig the lines and help show the girls how to drop into each feature. The determination from each woman to ride what they’d built as well as the encouragement and camaraderie amongst them was truly amazing to watch. Just as everyone was packing up to leave at the end of the day, a couple of us had waited for Hannah to ride her line. But to our dismay, she shouldered her bike and started hiking down the ridge. One of the other photographers called out to her that we’d been hoping she’d ride a line cause the light was so good. I’d already moved from my perch but it turns out I’d ended up in the perfect spot. Hannah made her way over to Cami and Louise’s line and gave us a holler before sending it down. It was one of those perfect place and perfect time moments and the photo results were epic. It was the best way I could think to end day one. 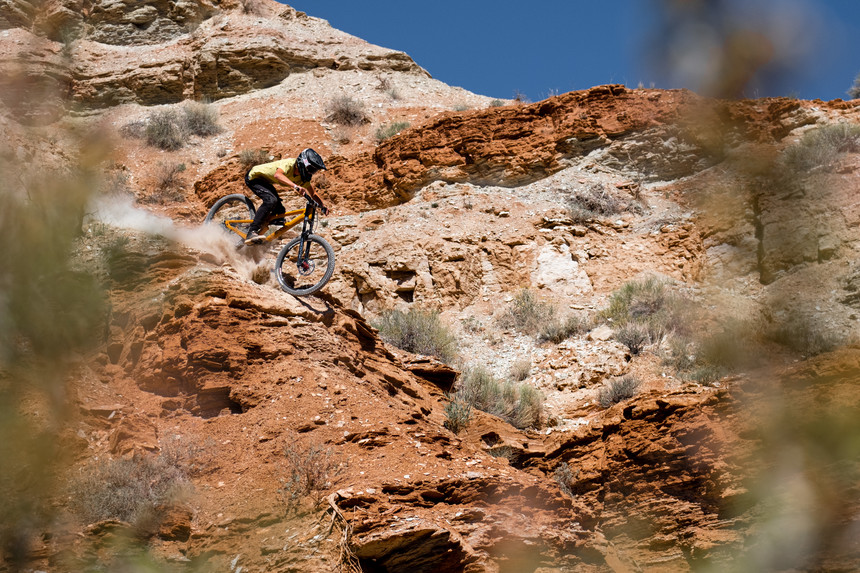 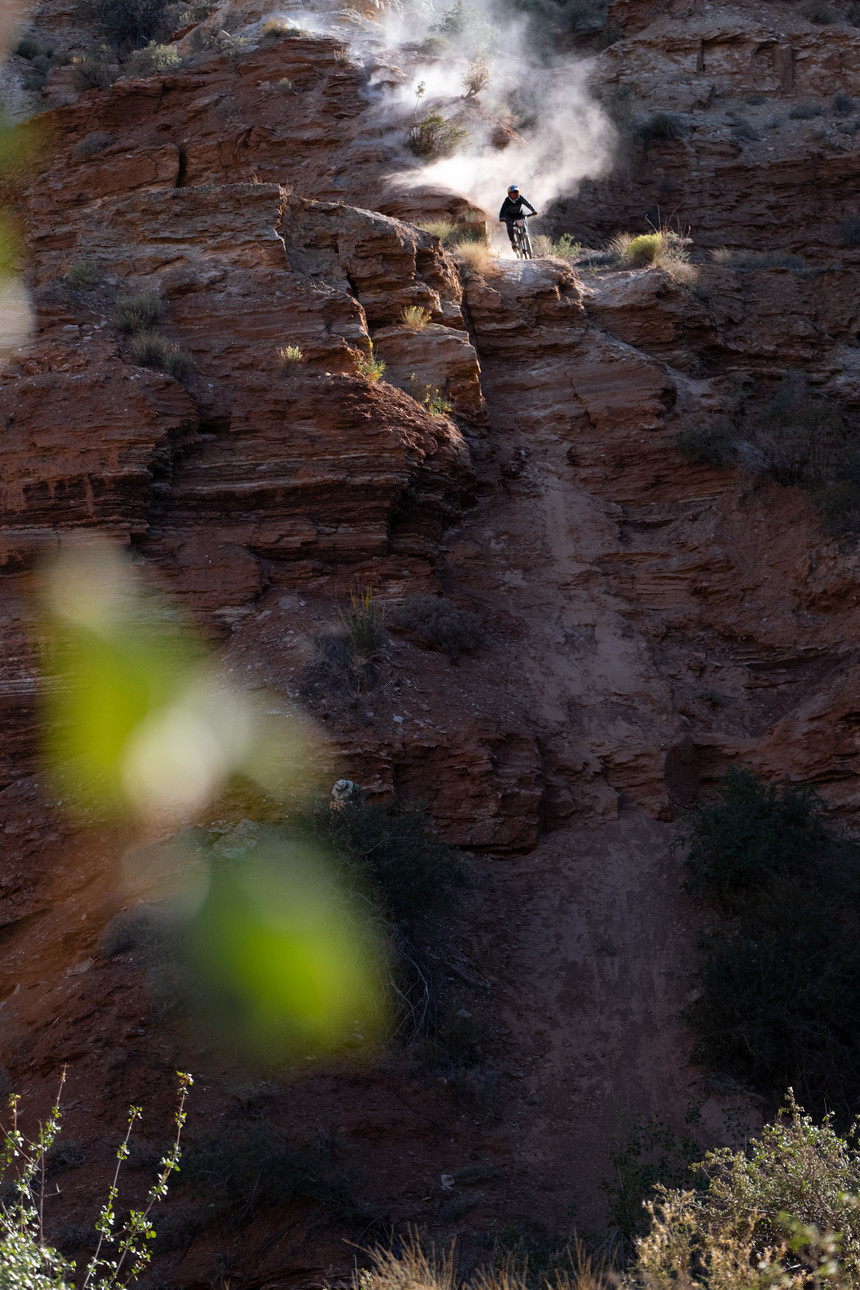 Day two began with some big crashes. Hannah Bergemann guinea pigged the step-down on her shared line and slammed hard. But after dusting herself off and getting her bike checked out, she went back up and stomped it. Vinny Armstrong spent the morning speed-checking her step down before being towed in by Ryan McNulty. She crushed the drop, and when I asked her how it felt, she laughed and told me “I don’t really know, I think I blacked out for all of it.” Similarly, McNulty helped tow Vaea Verbeck into her massive hip jump on the ridgeline. Vaea laced it a few times before taking a digger and dislocating her kneecap, which kept her from riding the rest of the weekend. As the sun set on day two of riding, Hannah, Casey, Vero, Georgia and their dig crews set back to work on the second big drop of their lines to make it rideable before the next day. 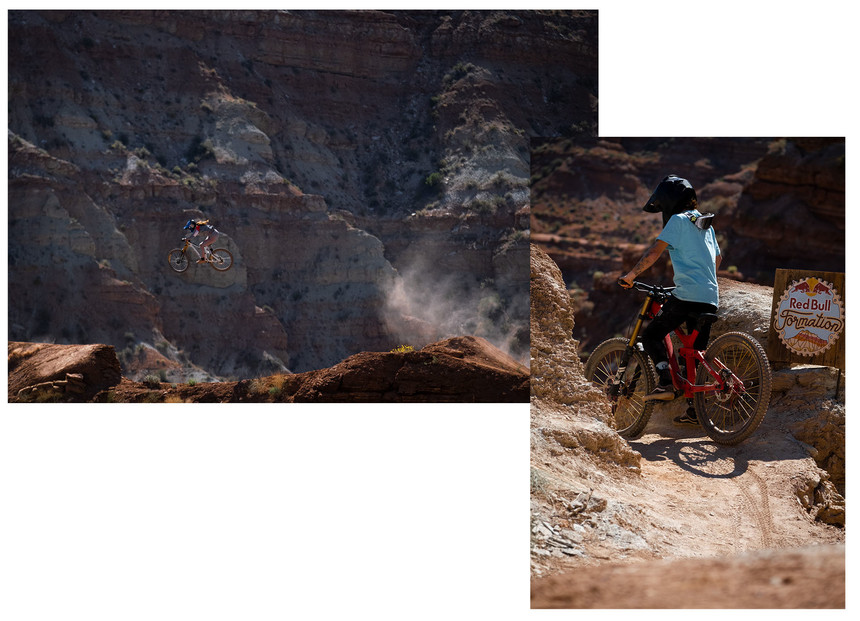 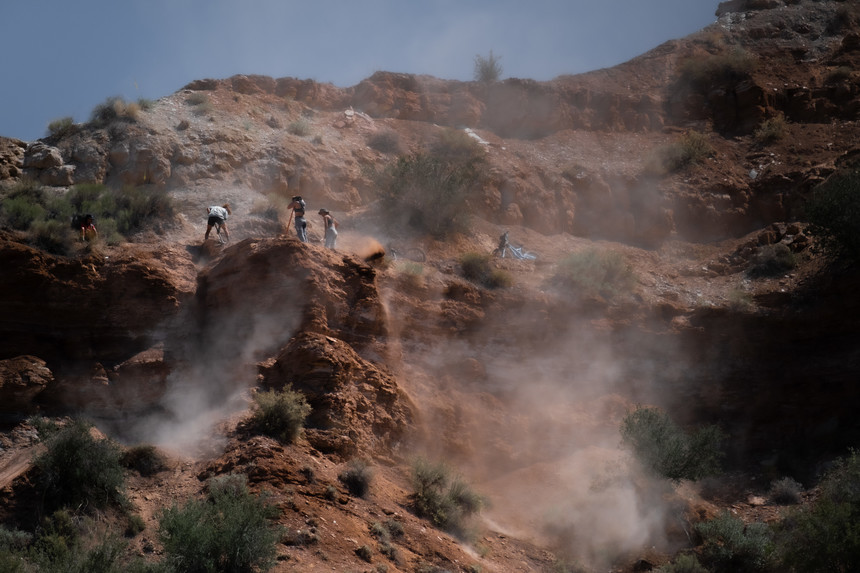 Diggers scramble to finish the step-down before the last day of riding. Izzy Lidsky photo.

The final day of riding began with high vibes. The crew of riders and diggers who had taken to fixing the step-down the night before had finished it and all four riders were able to hit it early in the morning and felt good about connecting their lines. Once the wind had died down around 10am, riders began to hike up to the top for their top to bottom runs. Haz went first, but after taking a spill in a loose section of her line, opted to hike down. Robin dropped in second and executed a fantastic line but it was really her second run that turned heads. She threw a one-footed can on her first hit before tossing out a massive sucide no-hander on the step-down in the Snake Pit and finishing up with the event's first-ever backflip. After working methodically on her step-downs the day before, Chelsea Kimball rolled out two flawless, powerful runs on her line. 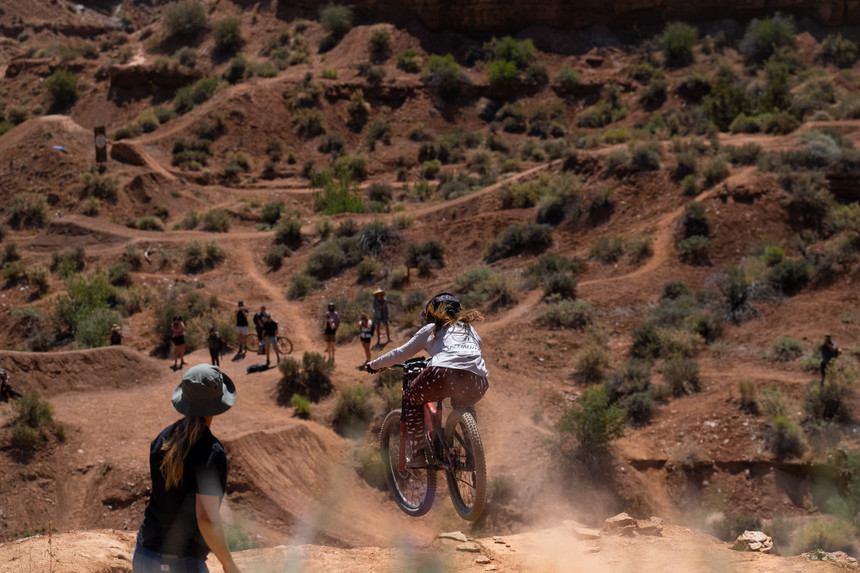 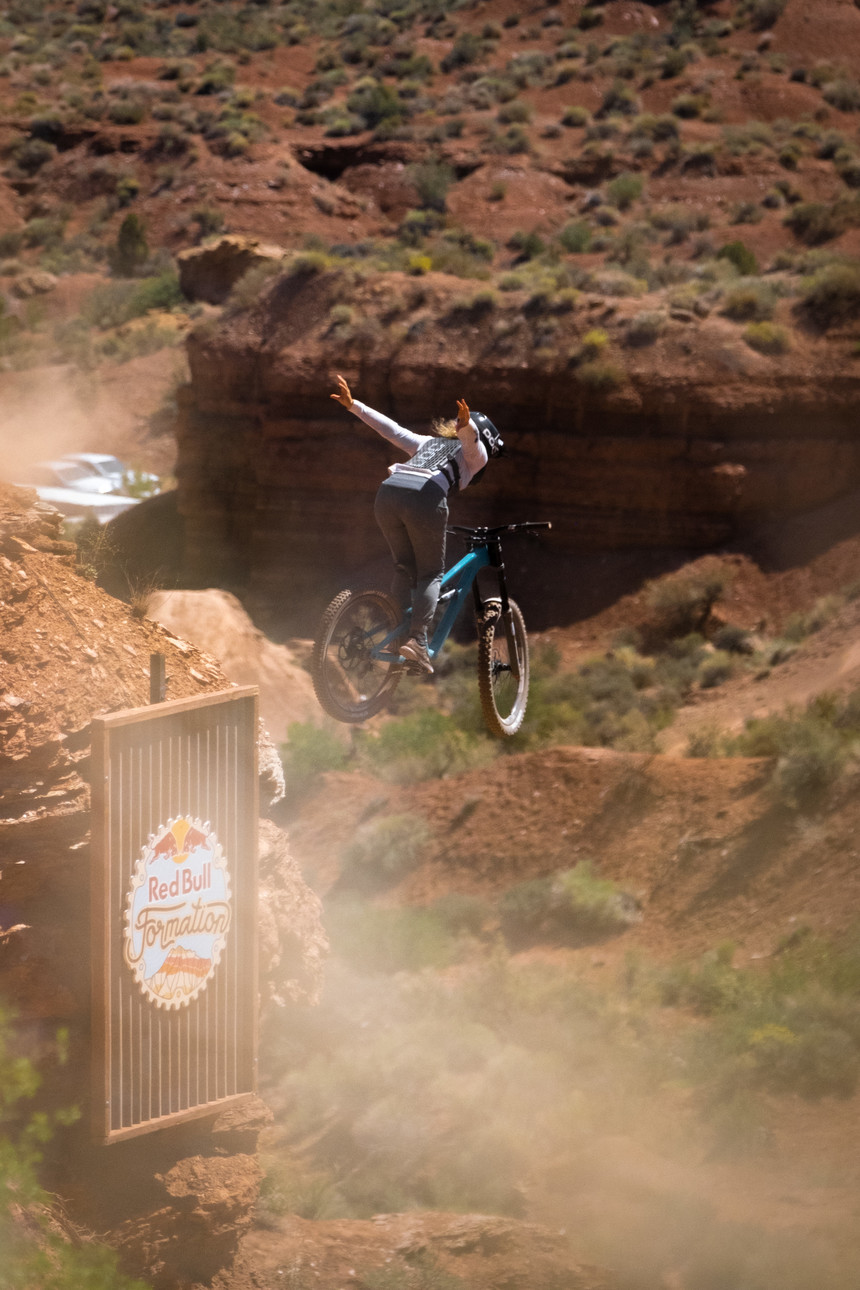 Cami Nogeuria came into her run with confidence and speed, but ended up crashing in an exposed spot on the mountain. In a show of unmatched grit, Cami hiked back up and executed her run perfectly, despite how loose some of the dirt in the line had gotten. Vinny Armstrong had tweaked an old injury in her ankle in practice that morning and was unsure if she’d ride top to bottom. But after watching other runs go down so well, Vinny made her way to the top of the mountain and executed her run with as much style as ever. 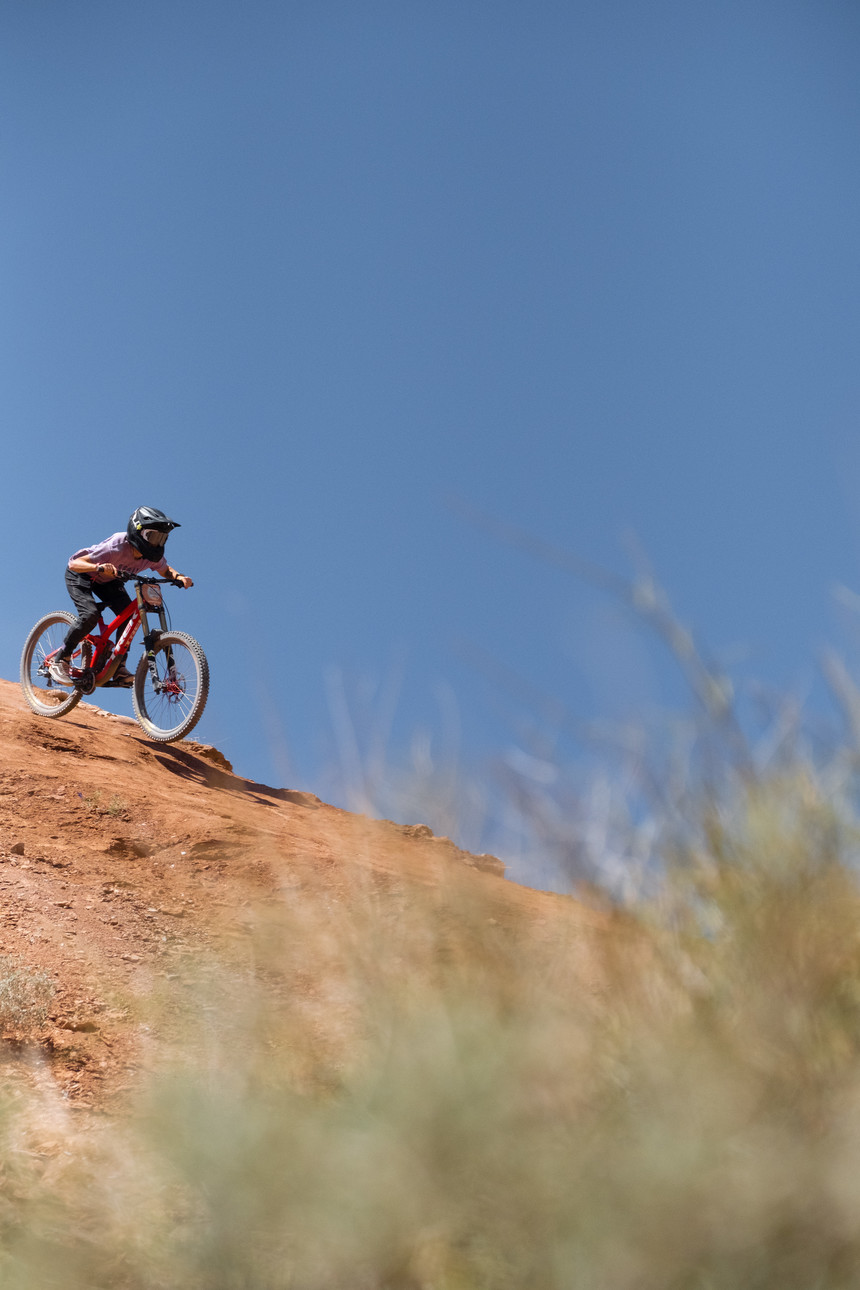 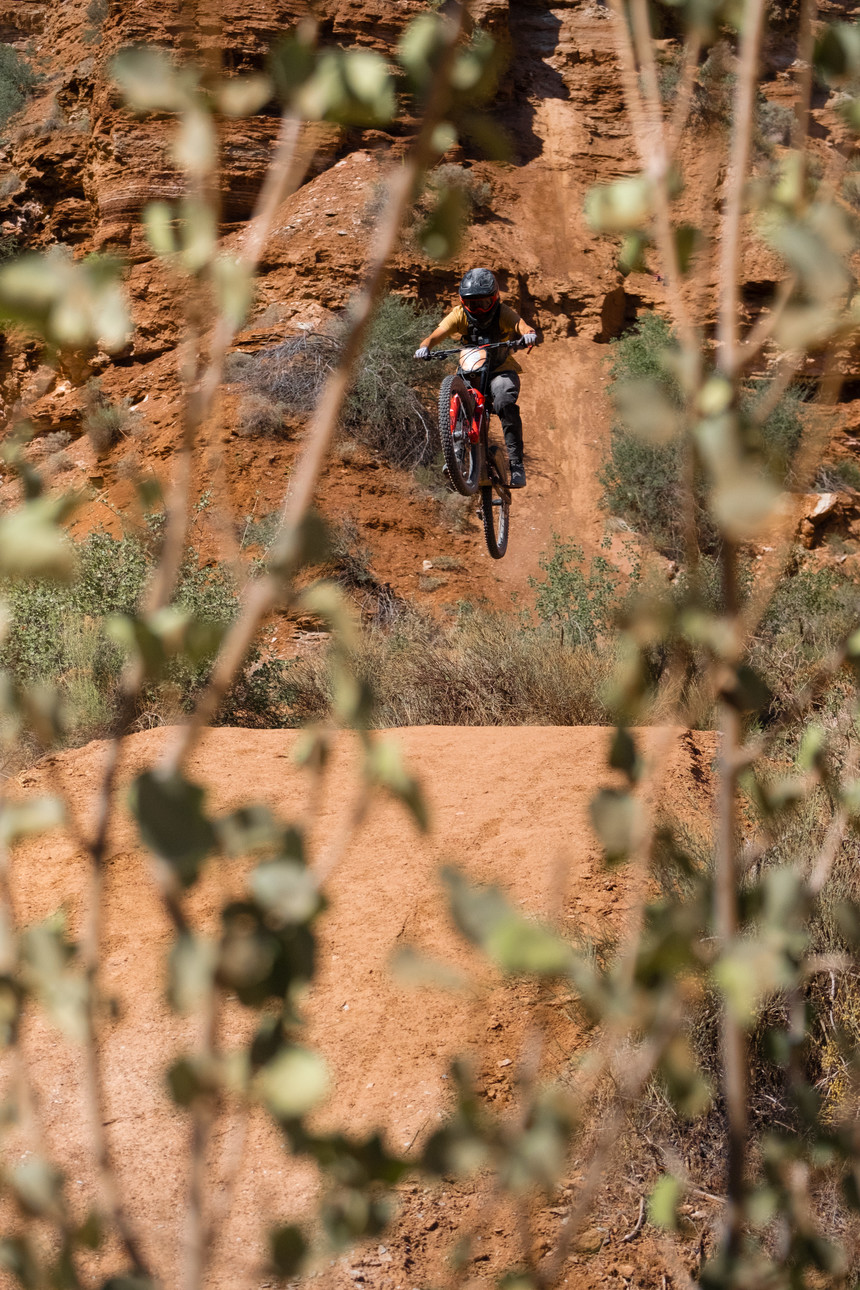 The week was full of innovation, inspiration, love, and collaboration between a killer group of riders and diggers. Although Formation is not run in a contest format, the rider still voted to award Cami Nogeuria the spiciest line award. 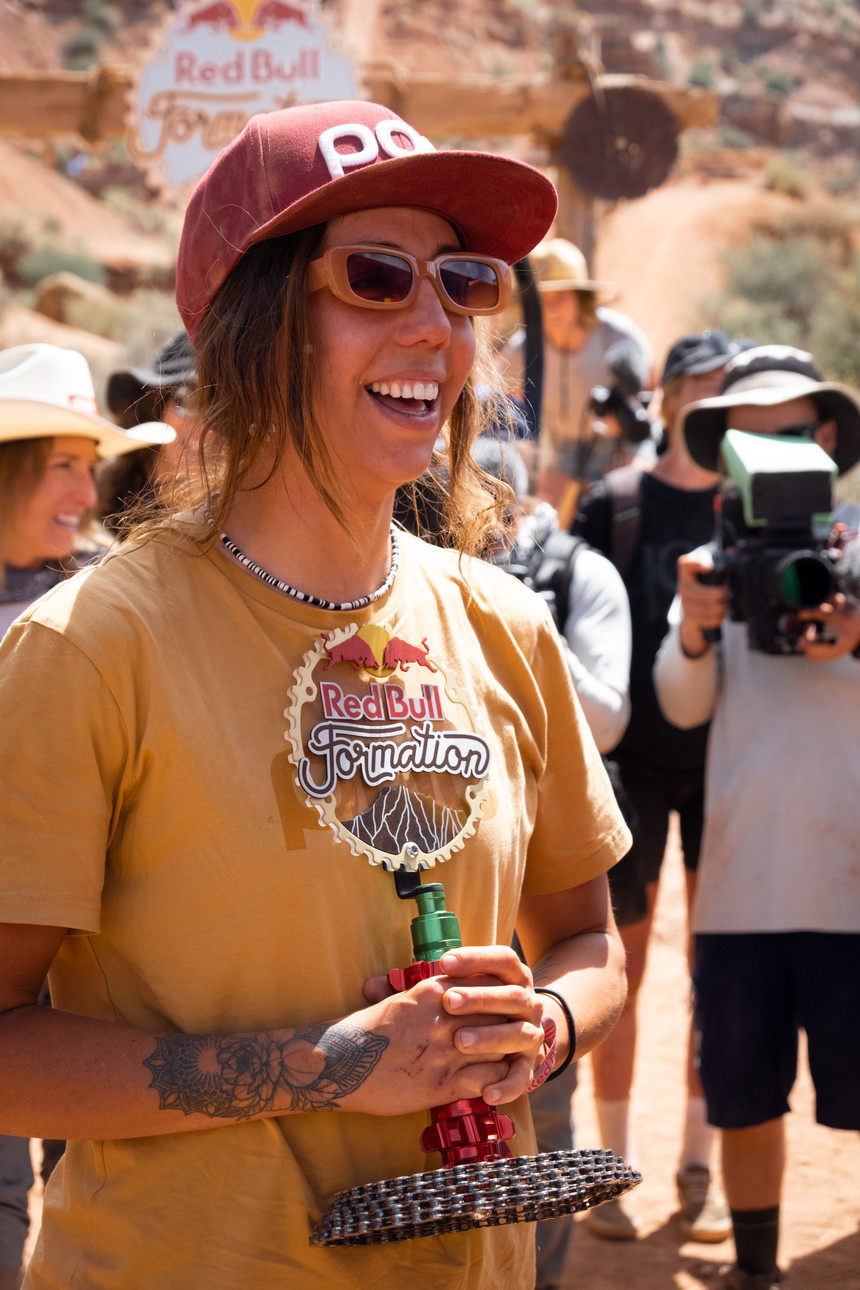 A gorgeous trophy made by Industry Nine. Izzy Lidsky photo.

The sport of freeride is only being progressed by women and the ways in which Formation continues to grow it and shape it are unmatched. It was an honor to be there and see all of it happen. Thank you for having us, Red Bull!

I am sure this piece of writing has touched all the internet viewers, its really really nice article on building up new website